Accessibility links
When Dogs, Cats And Rats Come To The Rescue : 13.7: Cosmos And Culture Humans haven't cornered the market on heroism. As anthropologist Barbara J. King notes, other animals ranging from dogs and cats to elephant seals and African pouched rats can win our hearts, too.

Heroic acts carried out by a wide variety of animals — elk and elephants, horses and goats, dogs and cats — are on offer in Jennifer Holland's just-published book, Unlikely Heroes: 37 Inspiring Stories of Courage and Heart from the Animal Kingdom.

A few years ago, Holland's Unlikely Friendships was a best-seller, and given my work in animal behavior, I was keen to check out her new focus. 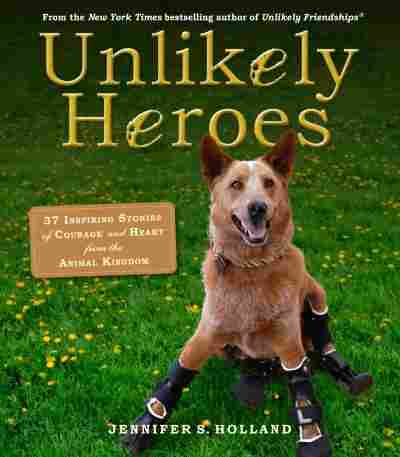 37 Inspiring Stories of Courage and Heart from the Animal Kingdom

Through spontaneous acts of bravery, living lives of service, or bringing about positive outcomes in other ways, animals may become rescuers of others. By design, Holland applies the "hero" label widely. In one story, a lactating mother hippo, with her own baby in view, rescues a wildebeest and a zebra baby, each trying to cross the Mara River during the annual Serengeti migration.

"Deep and fast moving when the animals arrive, the water is an obstacle in itself," Holland writes. "But it is made extra deadly by crocodiles."

On the day in question, the water was high, the crocs were hungry and the scene was chaos. As the last 10 wildebeest attempted to cross, one mother wildebeest climbed up on the riverbank only to see her infant drifting away and weakening. She became frantic, in the words of an observer. This is the moment when the mother hippo stepped in: She nudged the baby toward the riverbank and safety. Very soon, the same thing happened to a baby zebra, and the hippo's response was the same.

Just maternal instinct, you might say? Maybe so. But we don't withhold the term "hero" from human moms who save children in some impulsive act.

Some stories involve animals rescuing us. When I asked Holland by email earlier this week to select particularly moving stories from the book, she chose two of this nature. One involves a U.S. veteran named Jesse Knott and his cat, Koshka. Having already served in Iraq and sustained injuries there, on duty in Afghanistan Knott lost two of his men to a suicide bomber. He fell into a serious depression. Mistreated earlier as a feral cat, Koshka stayed with Knott through that time, interacting with him so persistently and lovingly that he felt pulled back from a very dark place. Holland told me:

"One reason this story is so powerful, is because the man himself is a hero in the more traditional sense, a war veteran and leader, yet he really sees this little animal as having saved his life (and made the lives of his fellow soldiers better) during the worst of times. The cat was just doing cat things — being funny, sweet, and affectionate — but it also seemed to know just what the man needed and when to provide it."

The rescue turns out to be mutual: Koshka now lives with Knott's parents in the United States. The skill of cats in helping "their people" is something I know about. As I wrote here at 13.7 in June, this summer I mourned the loss of my cat, Pilar. We had been close for 15 years but when I went through prolonged chemotherapy and radiation recently, she heightened her expression of attention and love toward me in ways that stay even now close to my heart.

Holland's second choice stars an elephant seal named Gimpy, who lived at the Marine Mammal Care Center in San Pedro, Calif., owing to partial paralysis and blindness. She had bonded with a keeper named Hugh Ryono, who worked at the center. One day when Ryono slipped and fell in the seal pen, he was suddenly confronted with three angrily aroused younger seals, each capable of doing damage by way of sharp canine teeth. Into the fray lumbered the 300-pound Gimpy, who not only allowed Ryono to crawl over her body (thus putting herself between him and the incensed trio) but also displayed her own teeth fiercely at the youngsters, causing them to back off. Holland wrote me that:

"[The event is] sort of a superman version of an animal story, but with a very unexpected creature swooping in at just the right second. Elephant seals: I've spent some time with them in the wild and they are not animals you'd expect to come to a person's rescue. In this case, the man had a relationship with the animal already, and I love the fact that the animal was moved enough by their bond to act on his behalf in a dangerous situation."

"Dogs Who Sniff to Save Species" is one of my own favorite chapters. It describes the Montana-based Working Dogs for Conservation, an organization that trains dogs to use their sharp sense of smell to distinguish one animal species from another, often using scat scents. A Labrador retriever named Wicket is at the center of this tale. Wicket's nose, Holland writes in the book,

"inspired the relocation of a planned development away from a grizzly bear habitat in Montana's Centennial Mountains. In South Africa, she found the exceptionally rare geometric tortoise and located a long-lost female whose transmitter had fallen off. And the dog's efforts not only led to finding kit fox where they hadn't been seen in forty years, but they also pointed out the best kit fox habitat, which the Bureau of Land Management then bought for the animals' protection."

Recently Wicket has joined a new WDC initiative in Zambia, searching out poachers' snares, which carry their own distinctive scent. I find this idea promising, as so much wildlife (in Africa and elsewhere) is under threat from illegal hunting.

In another chapter, we meet African pouched rats that sniff out land mines in war-torn areas — a rodent highlight of the book. The rats, fortunately, are too small and light to set off the mines should they walk across them, so risk to them of this usually dangerous work is quite low.

Might these stories help people think about, and act, compassionately toward animals in new ways? Or are those of us drawn to the book already prone to compassion for animals? When I asked Holland these questions, she replied:

"For those of us who already love animals, and see them as being empathetic, thinking beings, these kinds of stories have us nodding knowingly, happy for more evidence! But I think for people who aren't already in the animal-hugger camp, some of these cases could have an impact on how they think and act. Certainly most people have great respect for therapy animals, bomb-sniffing animals, and the like — those are that trained to be heroes in service to people. But going beyond that, when an animal does something remarkable without that training, makes a choice to help or protect, that gives even the most science-minded among us pause. The old days of totally separating humans and other animals, emotionally, are gone."

Animal heroes deserve recognition. Holland would be the first to say that there are many more than 37 inspiring tales of animal heroes — or 38 by my personal counting system, because of Pilar. Do any of you have animal-hero tales to share here, or thoughts on their significance?