Accessibility links
A Dark Side Of The Focus On Gay Marriage : 13.7: Cosmos And Culture As more states embrace gay marriage, might there be hidden costs for gays to such a single-issue emphasis? Anthropologist Barbara J. King takes a provocative look at this question.

A Dark Side Of The Focus On Gay Marriage

A Dark Side Of The Focus On Gay Marriage 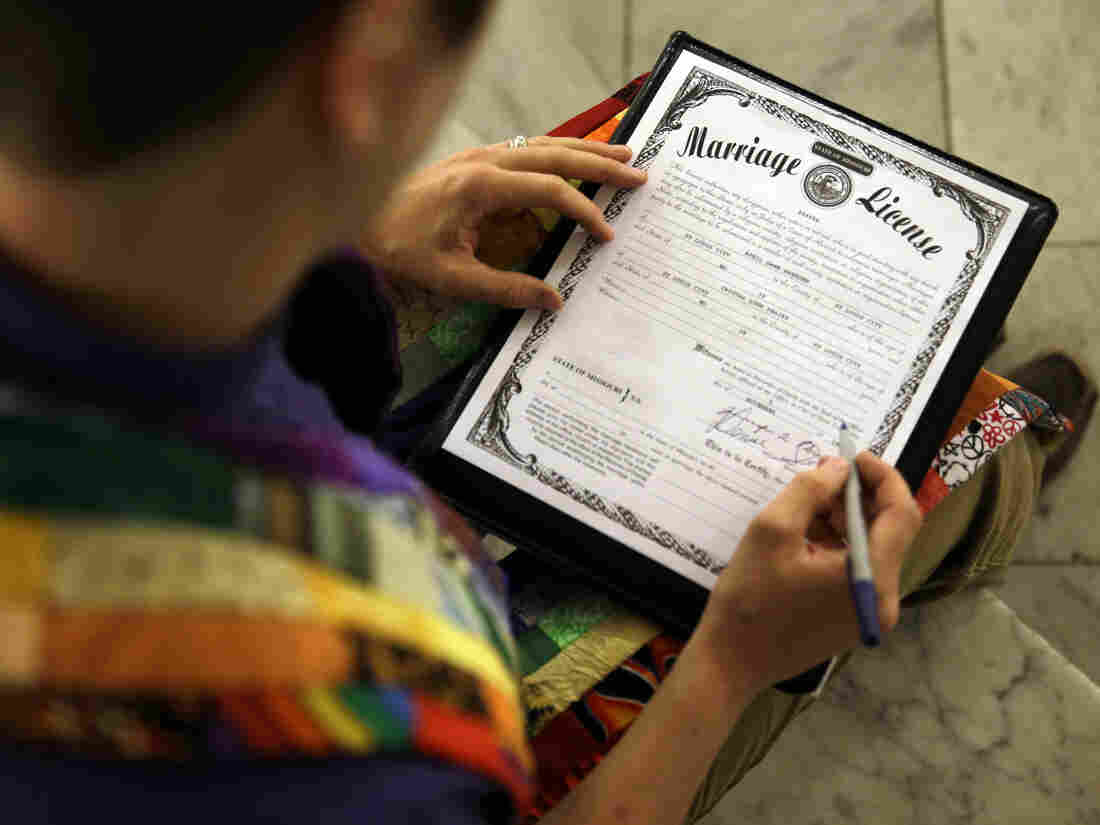 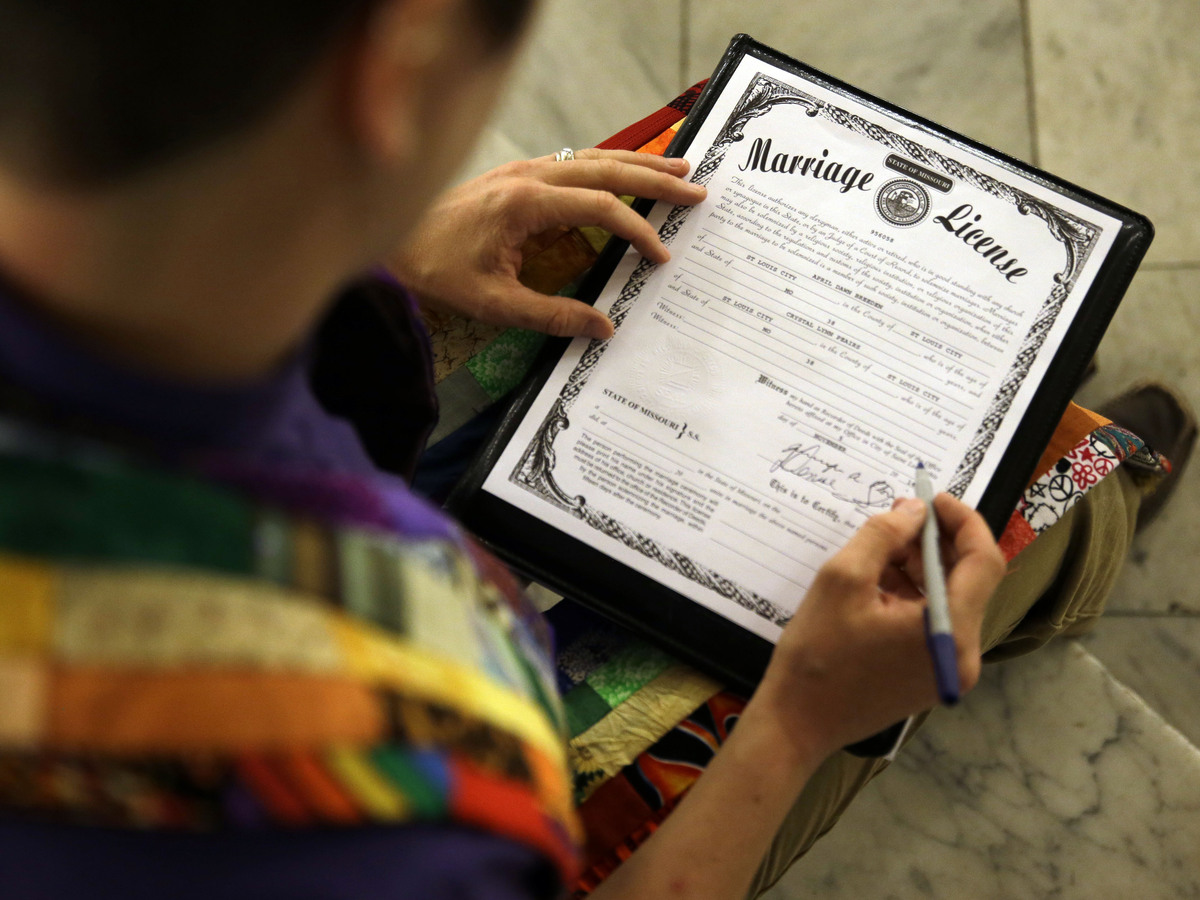 Gay marriage should be legal in this country. Inclusive of all sexual orientations and gender expressions, people deserve the right to celebrate their love publicly — and to gain the legal and financial securities that marriage may bring.

The quest for full inclusion of members of the queer community (I use "queer" as an umbrella term that gathers together people who are gay, bisexual, transgender, intersexual and so on) in our society, however, has come to focus so singularly on the altar that the fight for equality is harmed more than helped.

That's the thesis of The Tolerance Trap: How God, Genes and Good Intentions are Sabotaging Gay Equality, a book published in May that I just finished reading. It's by Suzanna Danuta Walters, director of Women's, Gender and Sexuality Studies and professor of sociology at Northeastern University. Walters argues persuasively that our unprecedented progress toward fair treatment of gays in the courts, the employment arena, schools, and in movies and on TV comes wrapped in a bland tolerance too anemic to bring about genuine equality.

"Because tolerance sets the bar so low (just don't hate us so much, just give us a modicum of 'acceptance')," Walters writes, "we imagine we have reached the pinnacle before we've even really started climbing the mountain."

Walters believes that the resources — effort, time, money — thrown at marriage equality is part of the tolerance trap: "We need to reckon with why gay marriage has become the sign of all things gay — for advocates and opponents alike."

Consider just some of the issues that are comparatively neglected in a frenzied focus on marriage: persistent bullying that gay kids endure and that may result in the victims' suicide; high rates of violence, especially against people of color; and passage of the Employment Non-Discrimination Act, which would end legal discrimination in the work place based on sexual orientation and gender expression.

That Walters is telling us people in the queer community may not inevitably be "just like" people in the straight community — and her championing of unfettered sexual freedom — is welcome. I don't think she's always right, though. She is sarcastic and condescending in her worries about framing the gay-marriage story "as one of rootless and commitment-phobic gays finally being able to join their hetero brethren on the path of monogamy and family." In fact she comes out so strongly against marriage as an institution, for anyone and everyone, that I would guess she alienates many gays and allies alike.

If we really could push past tolerance, what might the future look like? One scenario Walters offers takes our children as its focus — and she sets it up like this: "A young child, born male, prefers to wear brightly colored dresses to school and plays a dizzying array of make-believe games in which he is a princess and a queen and a fashion designer." In this hypothetical example, the child's school is progressive and he isn't thwarted from expressing himself in this way, nor is bullying tolerated.

Then Walters pushes us to imagine something more:

"Perhaps his ease with gender might encourage teachers to think twice about dividing groups up so easily into boys and girls. Maybe they will mix up pronouns a bit more, stop the default of 'he' as the automatic place of humanness. Maybe one could walk into a toy store and not see the world divided into gender aisles and read storybooks that didn't begin and end with heterosexual romance. Or, as [Executive Editor] Richard Kim writes in The Nation, 'Imagine saying I really wish my son turns out to be gay. ... Imagine hoping that your 2-year-old daughter grows up to be transgendered ...' "

That's a bold vision. Most of it I love. I am hesitant, though, to embrace Kim's imaginings. Never did I wish for my only child to be gay or transgender, but equally I never wished for her to be straight. I understand that Kim — and Walters — would probably insist that I never wished her straight because I assumed it, consciously or subconsciously. Maybe. (About 18 months ago, my daughter came out as queer to my husband and me; over time, she has become completely open about how she identifies. And I detest the thought that anyone merely "tolerates" her beautiful self.) I just think that inscribing a hierarchy of parental preferences for kids' sexuality is the wrong way to go here.

In a similar vein, citing the writer David Halperin, Walters mentions "the unique genius of being queer." Doesn't that phrase smack of specialness a way that benefits no one, that is as mired in a competitive categorizing that is overdue to die?

Overall, The Tolerance Trap is a winner, with fresh ideas blazing across its reader-friendly pages. We live in a time when the marriage of lovers Mitch and Cam on the popular television sitcom Modern Family (a show that I watch and enjoy) is taken as a symbol of progress toward human rights. And in a time when Eric Stonestreet, the actor who plays Cam, wants us to know that the televised wedding demonstrates "Mitch and Cam are just like everyone else" — a comment Walters would hate!

Walters offers a fresh look at what genuine equality must mean. It's a call to action, for all of us.