Accessibility links
The Little Comet Probe That Could : 13.7: Cosmos And Culture You may be carrying comet dust in your bones and blood. Probe Philae has shown that, now, we can go collect the original stuff. That's where science becomes magical, says commentator Marcelo Gleiser.

The Little Comet Probe That Could

The Little Comet Probe That Could 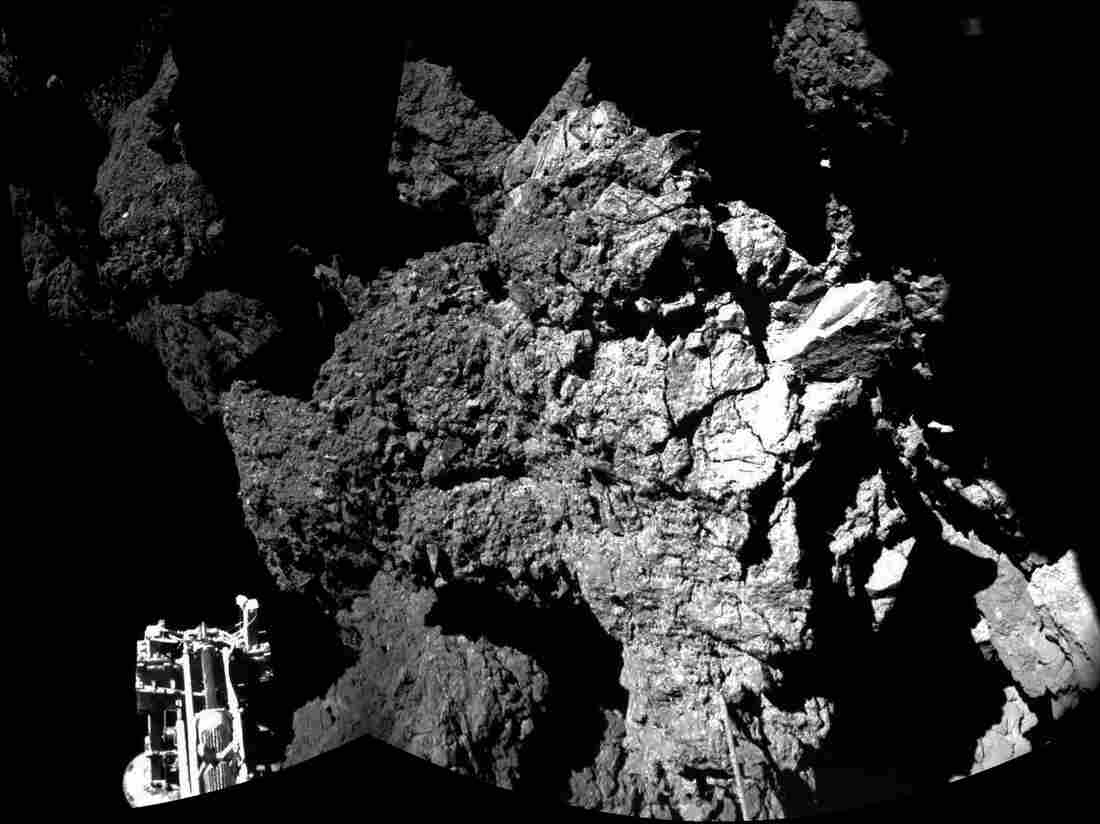 This combination photo produced with different images shows Philae after landing on the surface of Comet 67P/Churyumov-Gerasimenko. AP hide caption 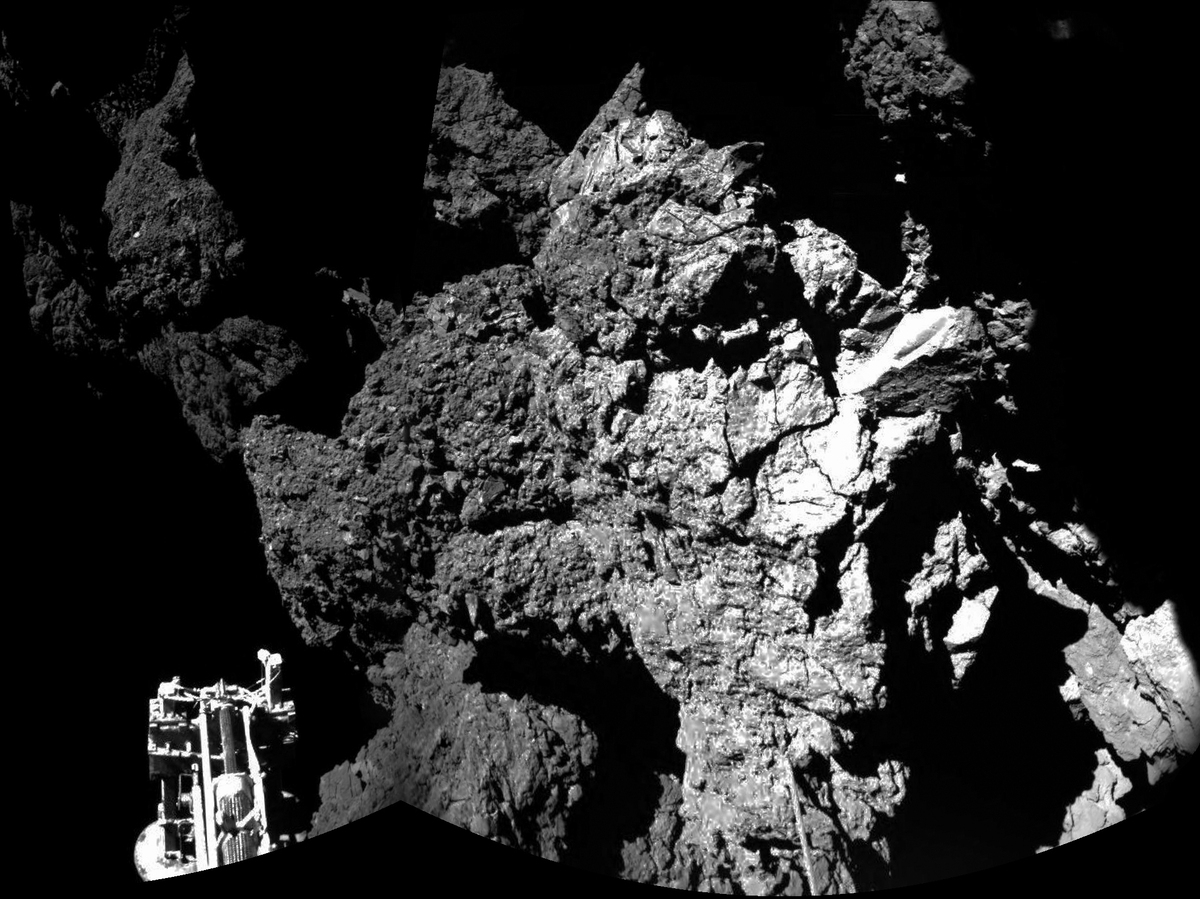 This combination photo produced with different images shows Philae after landing on the surface of Comet 67P/Churyumov-Gerasimenko.

Even with all the drama — and now the prolonged silence, possibly permanent — the European Space Agency's (ESA) mission to land a fridge-sized probe on a comet zipping at about 80,000 miles per hour, some 300 million miles from Earth, was a resounding success. This first ever comet landing has captivated the world as very few events in the history — certainly the recent history — of space exploration have.

People from all over have closely followed the news streaming from ESA headquarters, watching with mouths open and hearts pounding as the robotic probe Philae attempted to land on Comet 67P/Churyumov–Gerasimenko, only to bounce from its surface at least twice — finally resting by the shadow of a hilly incline.

Here is a spectacular mosaic of pictures telling the story of the little probe that could. The shadow on the right is the evil force that cuts Philae's lifeline, the sunlight needed to charge its batteries. Without charge it can't communicate to the mother ship orbiting the comet — and we are all left in the dark.

But as the hero that fights until the end (And who knows? It may awaken again.), Philae did beam about 80 percent of the data it was supposed to gather while its batteries were still operative. Although the data is still being analyzed, the little that has been revealed to us shows how the comet's surface is much harder than anticipated, which explains the bouncy probe landing even with the attenuating dust on the surface.

We should all pause for a second to celebrate this event and congratulate the ESA. The mission was approved in 1993, launched in 2004, with the probe taking 10 years to reach its final destination. That it all worked so well after so long is a triumph of modern technology, beautifully illustrating the best that science has to offer: the precision of the calculations and computer programming; the cutting-edge robotics and spatial navigation technology; our accumulated knowledge of the dynamical laws that rule the complex motions in the solar system. All of this comes from centuries of very hard work from many men and women.

What's so captivating about this mission is that it seems unreal, something belonging to a sci-fi movie. It's mindboggling that humans can actually do this. What was wild speculation in movies like Armageddon and Deep Impact, both from 1998, is now feasible. We could actually do something if a large comet were to threaten to collide with Earth in the future (long shot), faring much better than the dinosaurs did 65 million years ago. Such a technical feat speaks deeply to the collective psyche of humanity, showing what we are capable of doing if we only put our wits and resources together.

The real motivation for the mission, however, was not to learn how to protect us from an impact. It was to study the properties of this comet, in particular its composition, so as to learn more about the early history of the solar system.

Comets are the best-preserved fossils from our distant origins, dating back some 4.6 billion years, when a nondescript gas and dust nebula was collapsing to form the sun, the planets and everything else that exists in the solar system. Comets mostly consist of rock, water in the form of ice, and a combination of frozen gases such as carbon dioxide, methane and ammonia sprinkled with a variety of other chemicals. They are the source of much that happened here.

We believe that a good fraction of Earth's water came from comets that rained down with a vengeance during our planet's first billion years of existence. Think about that next time you drink a glass of water, or waste it in a long shower. In its infancy, the inner solar system was like a shooting gallery, with all sorts of debris colliding with the forming planets. Not just water, but possibly some of the more complex chemistry ultimately responsible for the emergence of life may have come from cosmic impacts. In fact, comets and early asteroids may have seeded Earth with some of the fundamental ingredients that now take shape in living creatures.

Imagine this: You as the proud carrier of comet dust in your bones and blood. And, now, we can go up there and collect the original stuff. That's where science becomes magical.