Accessibility links
Space, Time, Love And Stephen Hawking : 13.7: Cosmos And Culture The Theory of Everything celebrates the spirit of a man who has fought for all of his adult life to uncover the mystery of time, says commentator Marcelo Gleiser. 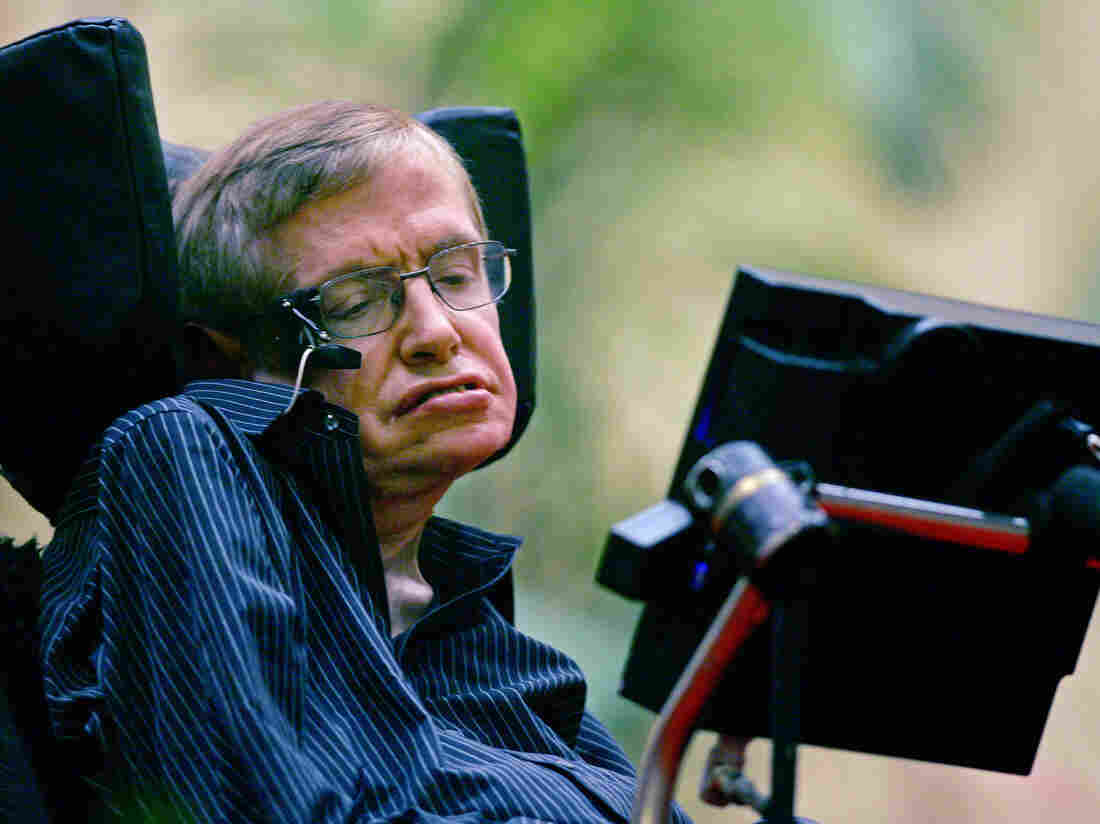 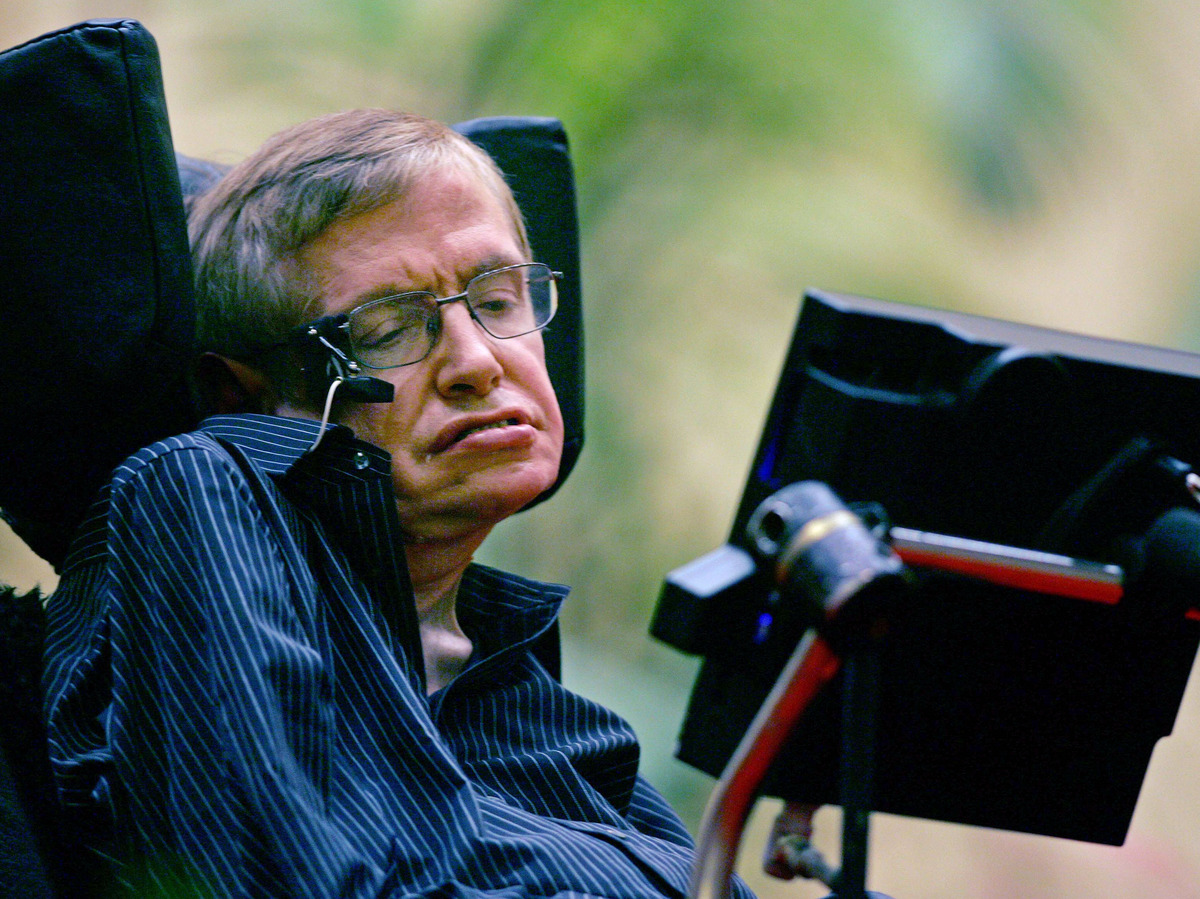 Stephen Hawking is the world's most famous scientist. I can't think of another example of a scientist who has had so many headlines and, now, a biographic movie while still alive.

The Theory of Everything stars Eddie Redmayne as Hawking and Felicity Jones as Jane, Hawking's first wife and true love. The movie is based on Jane's memoir of her years with Hawking, Traveling to Infinity: My Life with Stephen, and is directed by the Oscar-winning James Marsh.

It was wonderful to watch it a week after seeing Interstellar. Physics seems to be taking over the silver screen these days. Let's hope the trend continues. I will avoid spoilers here as much as possible, but viewers who want a complete surprise walking into the theater may want to wait to read this afterwards.

The screenplay focuses on Hawking's early life: his love story with Jane; their marriage; how her faith contrasted with Hawking's atheism; the terrible diagnosis of motor neurone disease (aka amyotrophic lateral sclerosis or Lou Gehrig's disease) at age 21 during the early stages of his Ph.D.; and his main contributions to astrophysics and cosmology. The disease he has slowly destroys motor neurons — nerve cells in the brain and spinal cord responsible for most voluntary muscle movement, like gripping, walking, speaking, swallowing, breathing. Most patients die within two years after diagnosis. Hawking is 72 and has three children and, now, three grandchildren. His survival is one of those mysteries not even he can solve.

I met Hawking in 1987, when I was a postdoctoral fellow at Fermilab, a high-energy physics center 40 miles west of Chicago. I was charged with picking him up at the airport with a special van. The movie mentions this trip, the first with Elaine, Hawking's nurse and second wife. This marriage ended tempestuously in 1995, with several of Hawking's friends and family members accusing Elaine of abusing her helpless husband. The movie doesn't go there.

"Brazilian, huh? I heard the girls there are amazing. What are you doing here?" Hawking's humor is his second weapon against the despair of living imprisoned in a body he can't control. (In a funny scene, Hawking's Cambridge buddy asks him what happens with sex. "Automatic," he replies, smiling. "That says a lot about men," quips his buddy.) Hawking's first weapon is his love for science, something the movie shows very well, thanks to a superb performance by Mr. Redmayne and a screenplay that captures the excitement and angst of basic research. I've been to countless talks by Hawking and have been around him enough at conferences and dinners to be able to compare; Redmayne really looks and acts like Hawking. I wonder what Stephen thinks of seeing himself portrayed on the screen.

Hawking's three main scientific results make an appearance, just enough so that the viewer understands the extent of his brilliance without turning the movie into a physics lecture. The first, obtained as part of his Ph.D. work, proves that the Big Bang is a singularity of space and, most importantly, of time, a point where the cosmic history began. This is a very solid result, inspired by ideas on black holes by Oxford physicist Roger Penrose. Hawking showed that according to general relativity, Einstein's theory of gravity, there is a moment back in time where all light rays converge to a point. This is the Big Bang singularity, the beginning of time as we know it.

The second, obtained years later in collaboration with University of California at Santa Barbara's James Hartle, supersedes this result, showing that when combined with quantum physics — the physics of atoms and subatomic particles — the Big Bang singularity disappears. To describe the very early history of the universe we must add quantum physics into the mix, given that the universe itself was small then, and even space and time start to jitter like electrons. Hawking showed that when gravity and quantum physics are combined, the singularity must be replaced by a "no boundary" condition, something that, in plain language, means having a timeless phase that preceded our era. There are thus two eras, a quantum one where time doesn't flow and a classic one where time flows as the universe expands. Even though the Hawking-Hartle model is not the only one proposing a quantum era for cosmology, it was the first, inspiring hundreds of other papers on the subject. I must add, though, that the whole subject of quantum cosmology remains highly speculative, as most models make many extrapolations and simplifying assumptions. Given that, we must extrapolate and simplify in order to make progress in science.

The third of Hawking's main results, in my opinion the most significant, deals with the radiation that escapes black holes. Hawking showed that black holes are not strictly black; that is, they emit small amounts of radiation at a rate inversely proportional to their mass. (The lighter ones emit more copiously.) In other words, black holes evaporate, sweating away electromagnetic radiation as they age, the so-called Hawking radiation. The result is a consequence of applying quantum mechanics near a black hole — and leads to the amazing prediction that black holes eventually disappear. If they do, a question comes to mind: What remains of the singularity that lives at their cores? The books are still open on this one.

In a meaningful moment in the movie, Hawking is lecturing on his mega bestseller A Brief History of Time (over 10 million copies sold), when someone asks what his philosophy of life is, given that he doesn't believe in God. "Whenever there is life, there is hope," Hawking replies.

Whatever his personal demons, Hawking has never lost his dignity. The Theory of Everything celebrates the spirit of a man who has fought for all of his adult life to uncover the mystery of time. And, in so doing, he brought the cosmic and the personal together.

Marcelo Gleiser, a world-renowned theoretical physicist and cosmologist, is professor of natural philosophy, physics and astronomy at Dartmouth College. He has published over 100 peer-reviewed papers and is the author of dozens of essays and four books, including The Island of Knowledge: The Limits of Science and the Search for Meaning. You can keep up with Marcelo on Facebook and Twitter: @mgleiser