Accessibility links
In Search Of A Science Of Consciousness : 13.7: Cosmos And Culture Philosopher Alva Noë explores ideas in a new book that suggests consciousness and self is best looked at by combining insight from Western science, Indian philosophy and contemplative practices.

In Search Of A Science Of Consciousness

In Search Of A Science Of Consciousness 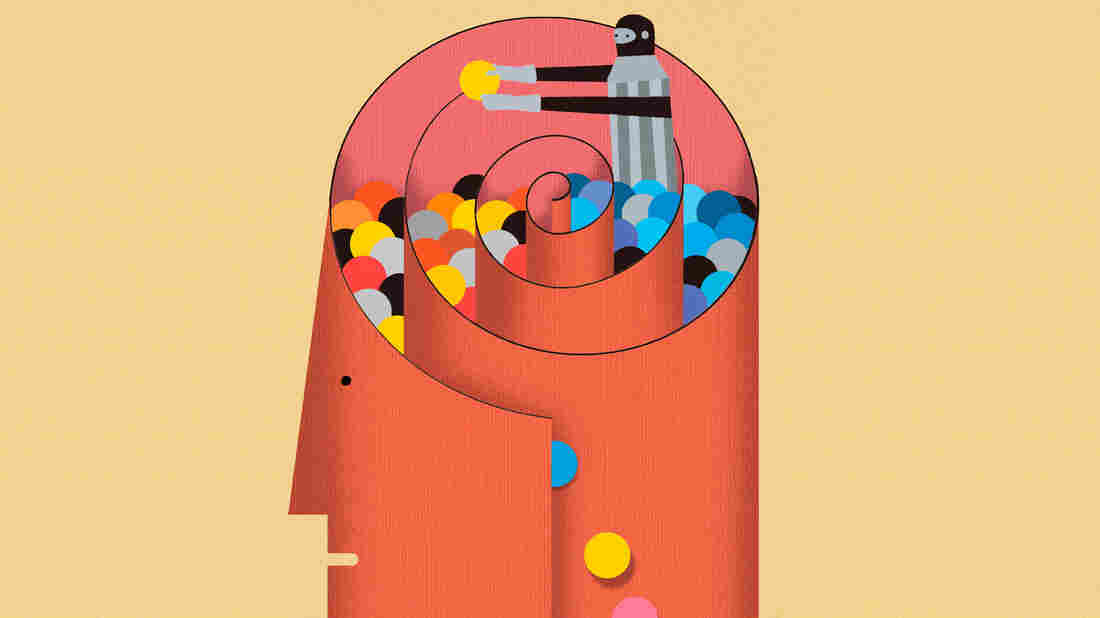 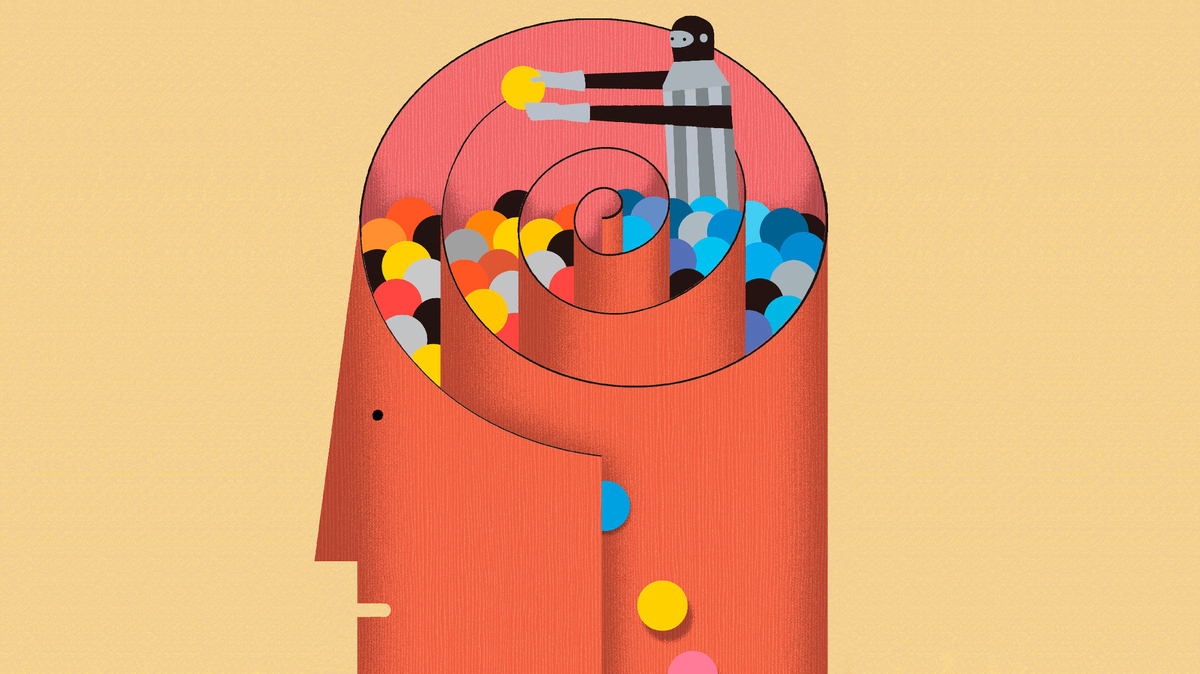 Any color you choose can be matched by a mixture of short, medium and long wavelength light (i.e., blue, green and red light). This perceptual observation led to the formulation, early in the 19th century, of a neurophysiological hypothesis: The eye contains three kinds of distinct color-sensitive receptors (cones); just as colors themselves can be composed of lights of different spectral character, so we can see the vast range of visible color thanks to the joint operation of only three distinct kinds of receptors.

This is a beautiful example of the primacy of experience in the study of the brain-basis of consciousness. Before you can even begin to think about how the brain enables us to see or feel or (more generally) experience what we do, you need to pay careful attention to what our experience is actually like.

And, so, it was further attention to the experience that led scientists to realize the shortcomings of what came to be known as the Trichromatic Theory of Color. 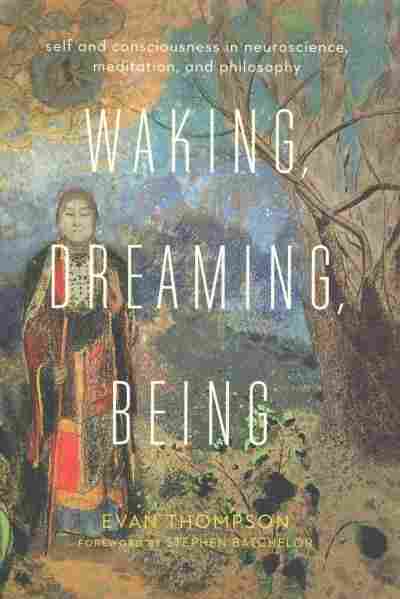 Self and consciousness in neuroscience, meditation, and philosophy

by Evan Thompson and Stephen Batchelor

Title
Waking, Dreaming, Being
Subtitle
Self and consciousness in neuroscience, meditation, and philosophy
Author
Evan Thompson and Stephen Batchelor

Consider: You get purple by mixing blue and red light. Indeed, purple is just a reddish-blue or a bluish-red; you can actually see the red and blue in the purple, and you can imagine a purple becoming more and more blue until it is entirely blue.

The Trichromatic Theory tries to explain these phenomena by suggesting that we see purple when our red and blue sensitive cones (that is, our long wave- and short wave-sensitive cones) are activated at the same time. Different purples correspond to different ratios of activation.

But now, consider the case of yellow. You get yellow by mixing red and green light, just as you get purple by mixing red and blue. But yellow isn't reddish-green or greenish-red in the way that purple is reddish-blue. In fact, there is no such thing as reddish-green. Moreover, you don't see red or green in yellow the way you see blue and red in purple. Yellow, like blue and red, but not like purple, is unary, not binary.

The Trichromatic Theory has no resources to explain facts about color vision such as these. In order to explain them, neurophysiologists were led to propose a totally different kind of theory of neural processing beyond the retina (the so-called Opponent Processing Theory).

I speak of the primacy of experience in order to bring out the fact that an investigation of what we see — a careful reflection on rules governing our experience — is a necessary preliminary to the neurophysiological study of how neural states support and enable consciousness.

But how do we study experience? How do we carry out what is sometimes, in philosophical circles, called phenomenology?

There are three kinds of obvious obstacle. First, most of the time, in daily life, we aren't interested in experience itself. We are interested not so much in the experience of color, for example, as in such things as whether the tomato is ripe, or whether you should paint your living room this shade of off-white rather than one of the half-dozen other shades for sale at the same hardware store. Paying attention to experience requires new skills, or at least new habits.

Second, so often when you do turn your attention to your experience, you change the experience. When was the last time you compared the way your sweater looks in different conditions of illumination? If you were to do that you'd probably notice features that had never been brought to your attention before. Have you better appreciated how your sweater really looks? Or do you now experience it differently?

Finally, our attitudes about experience are usually governed by familiar concepts, and those familiar concepts don't really do justice to the great variety we actually experience. Take that red car parked out front. You see it. It's red. You experience its color. But there is so much more to be said about how it looks, even just confining our attention to color, than merely that it looks red. At one end it is glowing white in the direct glare of the sun. At the other end it is bathed in cool shadow and looks, really, almost gray. Gaining access to the structure and quality of experience requires, it would seem, a better taxonomy of qualities and modes of awareness of those qualities. It isn't obvious that ordinary language and thought provide us with this superior taxonomy.

One of the extraordinary and exciting claims advanced in Evan Thompson's new book Waking, Dreaming, Being is that some meditative practices — for example the sorts of focused attention practices developed in some Buddhist traditions — can actually be thought of as techniques for attending to features of experience to which we usually pay no attention. Like artists and designers who learn to notice and see what most of us tend to ignore or neglect, adept meditators can see and notice things we rarely ever do. For this reason, if Thompson is right, these expert practitioners can play a special role not as guinea pigs, but as collaborators in the development of a better, more adequate neuroscience of human experience.

Now, Thompson's book has a much broader focus than this. He advances a specific philosophical claim — that the self is a process, not a thing or an entity — and he examines and develops this claim in the light cast not only by contemporary cognitive science but also traditional Indian philosophy and contemplative practices that are descendent from those philosophical traditions (but are not identical to them). The book takes a cross-cultural, historical and trans-disciplinary look at the self as it is treated in these different settings. Along the way, Thompson thinks about death and dying and whether consciousness can be explained in neural terms alone, as well as much else. He also participates in an open and genuinely critical dialog between science and religion.

But the thing to which I want to call attention now — I'll try to come back to other topics in the book in later posts — is Thompson's claim that Buddhist contemplative practices, religion and spirituality aside, can be thought of as a kind of phenomenological training — one that can serve the scientific study of mind. This is related to a second claim advanced in the book. I mentioned before that our reflection on experience tends to be governed by concepts that do not always do justice to the full range of qualities that we experience. Thompson argues that there is an ancient Indian philosophical tradition (which comes down to us in the text of the Upanishads, and to which Thompson offers an accessible introduction) that aimed, with rigor and precision, among other things, at the development of a taxonomy of modes of human consciousness.

As Thompson notes, in the Western tradition we tend to think of consciousness as something that is present or absent. You have it when you are awake. You lose it when you are knocked out. But ancient Indian philosophers — writing thousands of years before Socrates — thought it was crucial to distinguish modes of consciousness within the range of what, in the Western tradition, we call unconsciousness. Dreaming, lucid dreaming, deep and dreamless sleep, and so-called pure awareness — the awareness that is always present beneath or behind waking, dreaming, and peaceful, dreamless sleep — are examples of such modes. I won't pursue these in any detail here. My present point is more general.

One of the beautiful ideas, or maybe it would be better to say challenges, in Thompson's book is that Western science has not yet framed for itself an adequate phenomenology of experience (maybe, by the way, not even an adequate phenomenology of color). What is needed, then, according to Thompson, is not so much an opportunity to put monks in the scanner to see what makes them special but, rather, an opportunity to collaborate with them — and with the philosophical tradition that informs their practices — to understand better the character of experience and, so, take the necessary preliminary steps toward a better science of consciousness.

Alva Noë is a philosopher at the University of California at Berkeley where he writes and teaches about perception, consciousness and art. You can keep up with more of what Alva is thinking on Facebook and on Twitter: @alvanoe