Accessibility links
A Case Against The Phrase 'No Problem' : 13.7: Cosmos And Culture Commentator Alva Noë says "no problem" is the wrong way to reply to an expression of thanks — for the simple reason that saying "thank you" isn't, or shouldn't be, a veiled way of making an apology. 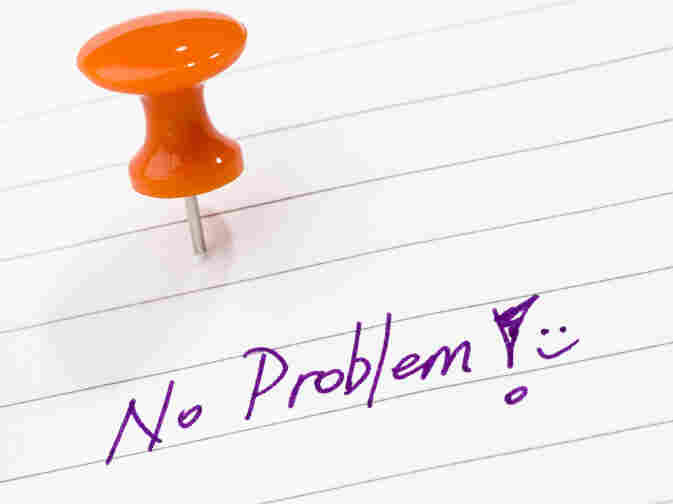 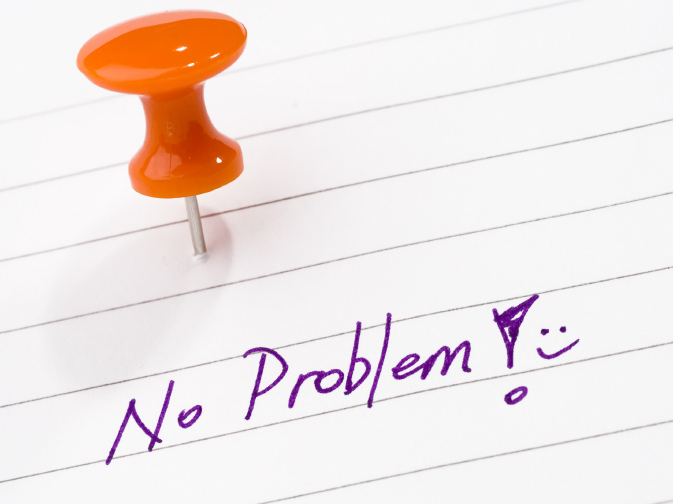 The phrase "no problem" has always struck me as a fine way to respond to an apology. It is friendly to say to a person who has interrupted you, or cut you off, or woken you up, or missed an appointment, that the problem they caused you is no problem. By minimizing the wrong done — by saying that it was no problem — you both acknowledge the apology and express forgiveness. Perfect.

To my ear, though, "no problem" is absolutely the wrong way to reply to an expression of thanks — for the simple reason that saying "thank you" isn't, or shouldn't be, a veiled way of making an apology.

Saying "no problem" in place of "you're welcome" always strikes me as self-defeating. I thank you for your service, or your gesture, or your generosity, or you kindness. So why are you even mentioning problems?

Granted, it may not have been fun for you to pick me up when my car broke down in the middle of the night. Or maybe you were in a hurry so the courtesy of holding the door for me grated somewhat. Still, your courtesy or your assistance are gifts given freely, not problems I've foisted on you — and I don't express my gratitude to say I'm sorry for imposing. It's my way of expressing how much I value your effort and concern, or simply your courtesy.

By saying "no problem," it always seems to me as if what you are really saying is: "It is a problem and I forgive you for it."

If every act of kindness is expected to solicit the embarrassed spirit of apology on the part of the beneficiary, then it's not much of a kindness, is it?

I have the feeling that this is a fairly recent change in our verbal culture — and that it's been accelerating. And it doesn't really feel to me like a merely verbal shift at all, as if "no problem" has simply come to mean "you're welcome." To me, it feels like a culturally significant obliteration of the difference between giving and demanding, expressing gratitude and saying sorry.

Now, you might think that giving and receiving thanks are and have always been fraught, and that "no problem" simply brings out the tension between giving and demanding, between "thank you" and "sorry," that has always been there. You might say, consider another traditional way of acknowledging gratitude — "It was nothing!" Or even, "my pleasure." Doesn't "it was nothing" just mean "no problem," you might ask, and isn't it just a lie to say that it was "my pleasure" to pick you up when your car broke down?

Maybe I'm wrong in thinking that there is anything new going with the rise of "no problem." But I'm not convinced.

Here's why: When I say that "it was nothing," I am not saying that I don't deserve your thanks because I didn't do anything. Nor am I saying, "don't worry, you didn't cause me that much inconvenience." I am simply making myself small. I am shifting attention away from me and, in doing that, I am acknowledging you. (I don't mean that whenever you say those words — "it was nothing" — that's necessarily what you are doing. It's possible to flaunt one's generosity and virtue with those very words.)

And when I say "it's a pleasure," what I mean is not that it was actually pleasurable to get dressed and go out in the night to fetch you. What I mean is that it gives me pleasure to fulfill my obligations to you as a friend or as a member of your community. And that's not a lie.

By bringing problems into the mix, on the other hand, it seems to me that using "no problem" goes in just the other direction. It calls attention to the negative, the problems, the inconveniences, the good deed and, so, it swells the one getting thanked and diminishes the one thanking. It negates the gratitude by transforming into debt and apology.

I'm curious to know what readers of 13.7 think about this. Is it just me? Or am I on to something? And if I am on to something — if there is something new in the prevalence of the phrase "no problem" — have I put my finger on what it is?