Accessibility links
We May Have Snakes To Thank For Our Acute Vision : 13.7: Cosmos And Culture Anthropologist Barbara J. King takes a look at a new paper supporting the snake-detection theory, a set of hypotheses suggesting we owe certain features of our evolution to the risks posed by snakes. 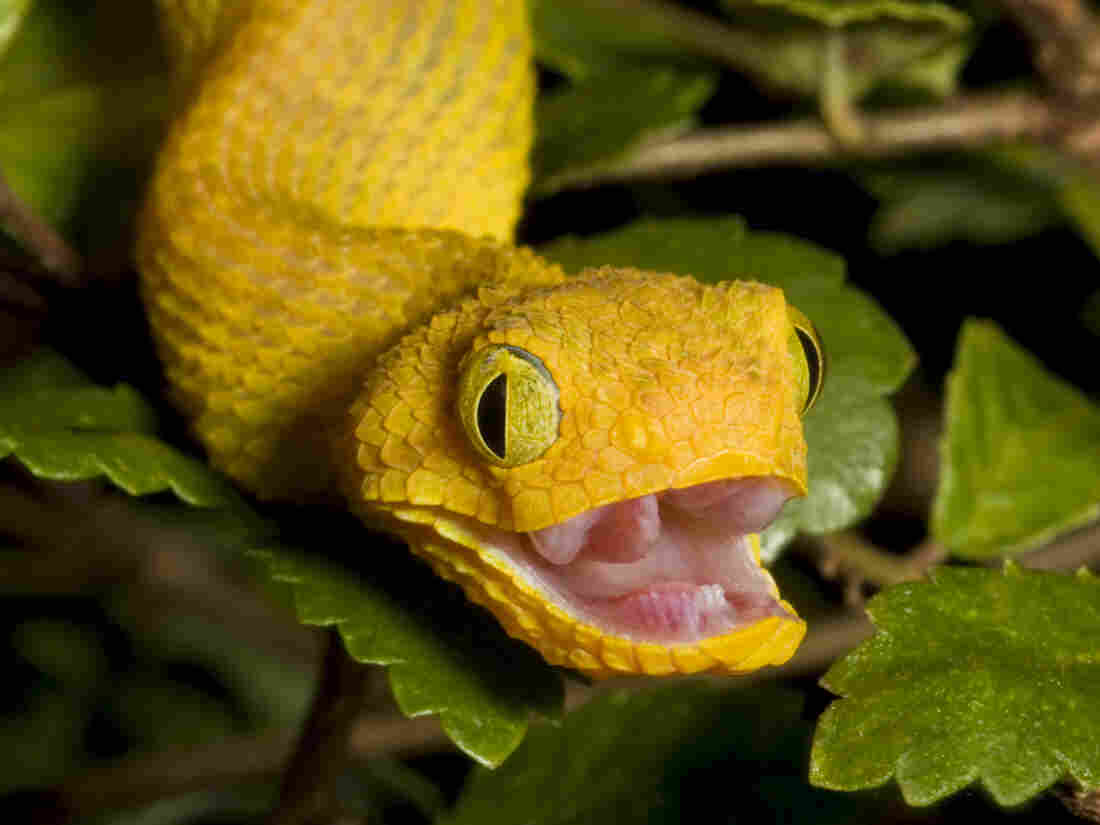 Next time you run into an African bush viper like this one, be thankful for your forward-facing eyes. iStockphoto hide caption 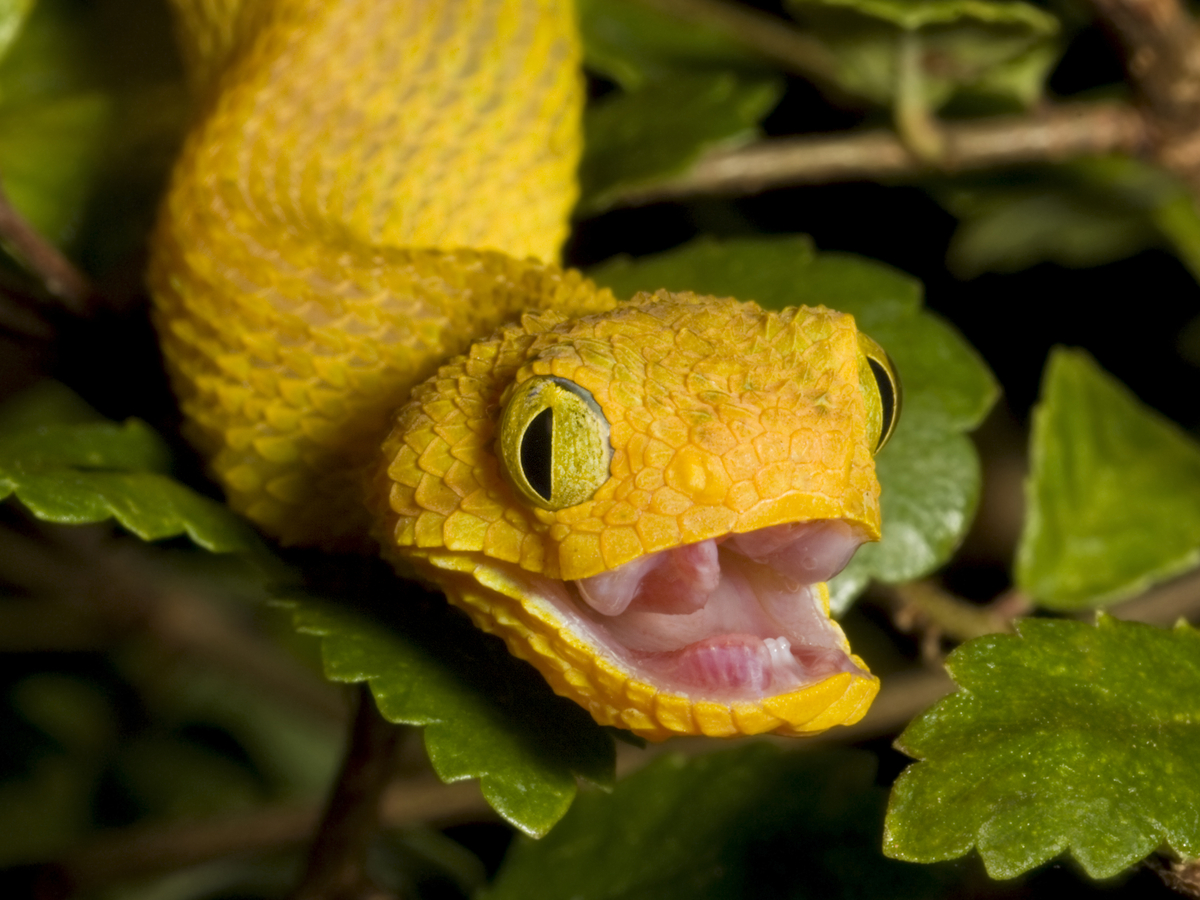 Next time you run into an African bush viper like this one, be thankful for your forward-facing eyes.

In a new paper published in the journal Primates, author William C. McGrew, a former professor of evolutionary primatology at the University of Cambridge, reports a high rate of venomous snake encounters by his team of primatologists seeking to observe unhabituated wild chimpanzees in Mount Assirik, Senegal, West Africa.

McGrew's snake-encounter analysis in the paper Snakes as hazards: modelling risk by chasing chimpanzees is one test of what's known as the snake-detection theory of primate origins, a set of hypotheses that suggest we (along with other primates) owe certain features of our evolution to the risks posed by death and injury from snakes.

During the 609 days that make up the core period of the analysis, McGrew and his team encountered a snake in Assirik, on average, once every 4.3 days — totaling 132 snake encounters. During the entire study period of four years, 142 snakes of 14 different species were identified. Of these, 64 percent were venomous: 33 cobras, 27 vipers and 24 rear-fanged snakes.

In the mixed habitat of Assirik, snakes were encountered in the forest twice as often by the researchers as expected by chance, at chance rates in the woodland, and half as often as expected in the grassland. The dry season was considerably more risky a time for snake encounters than the wet.

McGrew acknowledges that the sample of identified snakes is "pitiful by herpetological standards," notes that the methodology was non-random because the researchers walked more in habitats preferred by chimpanzees, and specifies that no chimpanzee-snake encounters were witnessed.

So, do these published data matter? I think they do.

"Our encounter rate," McGrew writes in the paper, "seems notably high, as does the proportion of venomous snakes. If anything, our encounter rate may have been lower than that of the apes, if party size is positively correlated with snake detection efficiency, proxied by number of vigilant eyes. Median party size for the chimpanzees was four; for observers it was two."

It's this "notably high" encounter rate that supports the snake-detection theory, developed by anthropologist Lynne Isbell. Isbell, author of the 2009 book The Fruit, The Tree, and the Serpent: Why We See So Well, explained some of her core ideas regarding snake detection to NPR's All Things Considered in 2013:

"We [humans and other primates] have our forward-facing eyes. We have our excellent depth perception. We have very good visual acuity, the best in the mammalian world. We have color vision. So there has to be some sort of explanation for it."

The All Things Considered story notes, "Primates in parts of the world with lots of poisonous snakes evolved better vision than primates elsewhere, Isbell found out. It's no accident that lemurs in Madagascar have the worst vision in the primate world, she says. There are no venomous snakes [in Madagascar]."

Last week by email, Isbell elaborated for me on the two "thrusts" of her snake-detection theory (SDT):

"In both cases, snakes would have helped generate changes in the primate visual sense that would enable them to visually detect snakes (which are often still very difficult to see) better than other mammals could. Of course, better vision is clearly helpful in other contexts now but the SDT proposes that the impetus for the evolution of better vision was the need to detect and avoid dangerous snakes that were and still are often difficult to see."

Centrally, then, the SDT posits that the possibility of death or injury from contact with snakes was an evolutionary selection pressure that put our lineage on its path toward visual acuity and highly developed brains.

I asked Isbell why other animal lineages weren't similarly affected, since surely other animals too would have encountered snakes. Ancestral placental mammals, she explained, were probably nocturnal, not active during sunlight hours. By contrast, the lineage leading to primates "would have spent the day in shrubs and trees (because all primates have grasping hands and feet for arboreal living), where sunlight would have penetrated." As a result, that lineage "could take advantage of sunlight to detect their predators visually, which resulted in increased visual improvement over time."

In the past few years, neuroscientists have been at work testing some of Isbell's specific hypotheses. Isbell told me:

"One of the hypotheses predicted that the pulvinar, a visual structure in the subcortical part of the brain, would be important in allowing primates to detect snakes quickly. An international collaboration of Japanese, Vietnamese, and Brazilian neuroscientists decided to test the hypothesis. Sure enough, they found neurons in the pulvinar in monkeys that fired more rapidly and strongly to snakes than to other objects, even monkeys' faces.

"And in another study, they found neurons in the pulvinar that also responded more strongly to snakes that are poised to strike than to snakes in non-threatening postures. So not only can the visual system of primates zero in on snakes specifically, it is also highly sensitive to snakes that are more threatening. These are very exciting results! The heightened sensitivity of the pulvinar to snakes supports the main premise of the SDT that snakes have long been very important to avoid and thus for those in our primate lineage to see, and to see quickly."

More field studies in primate habitats like McGrew's will, Isbell hopes, join with the neuroscience work in further testing the SDT.

Taken together, the findings from primatology and neuroscience regarding the SDT may help explain why many of us react strongly to the sight of a snake. Our response may be deeply ingrained, even when the chances of encountering a poisonous snake are quite low, and when comparatively speaking, the risks to most of us from snakes today just aren't very great.

If you startle or otherwise react strongly and rapidly at a snake sighting, then, just consider yourself a well-evolved primate.