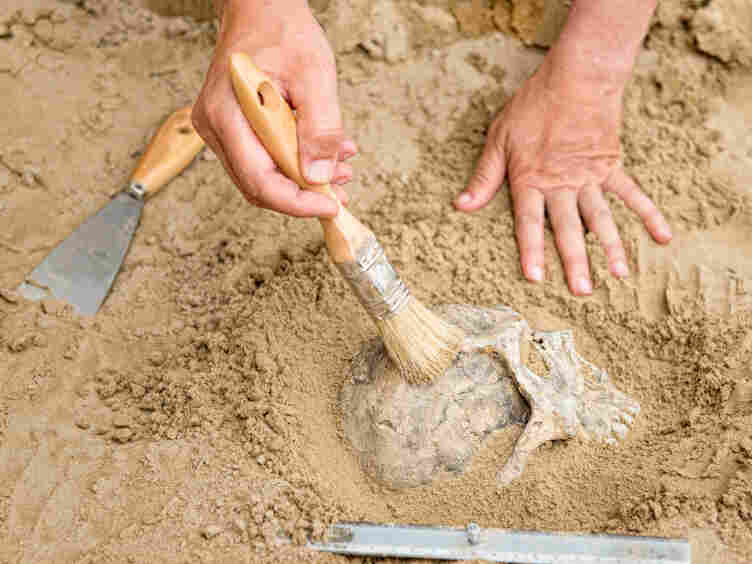 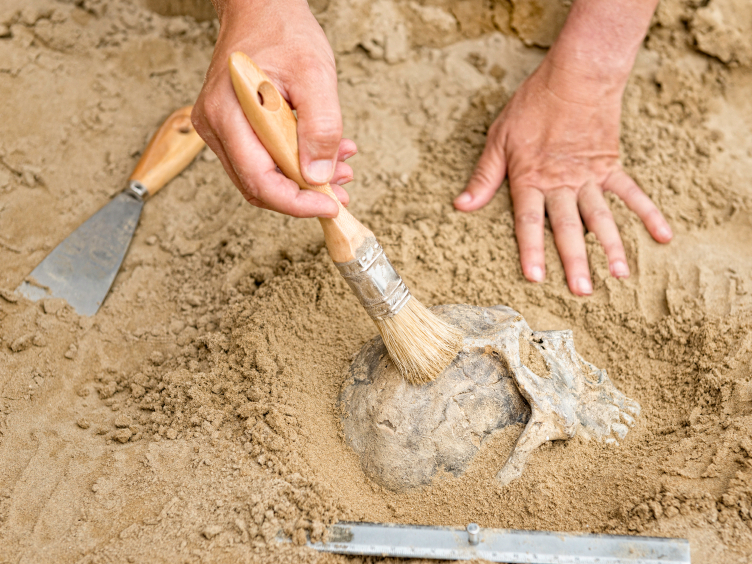 Imagine that in a discussion with friends, the talk turns to invasive species and the cascading changes they cause in the ecosystems they colonize.

People begin calling out names and places: pythons in the Everglades; cane toads in Australia; lionfish in a wide swath of U.S. and Caribbean waters; kudzu everywhere in the U.S. (or so it seems — see this distribution map for kudzu).

If biological anthropologist Pat Shipman were part of the conversation, she might call out something different: modern humans.

In her new book The Invaders, out this month, Shipman declares our species to be the most invasive that has ever lived. She assembles a compelling case that the archaeological record around 40,000 to 35,000 years ago is best understood as reflecting a "classic trophic cascade caused by the appearance of an apex predator" — that is, us. 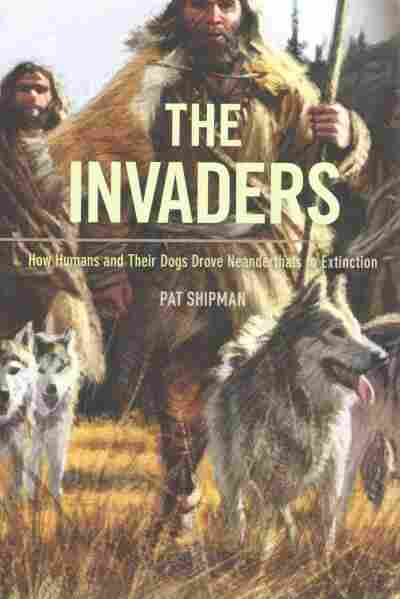 How Humans and Their Dogs Drove Neanderthals to Extinction

As part of that cascade, Shipman argues, our ancestors pushed the other smart bipedal, big-brained primate alive at the time — Neanderthals — to extinction.

The dates often suggested for the last of the Neanderthals, generally 27,000 or 26,000 years ago, are no longer reliable, Shipman reports: A significant effort at re-dating a number of archaeological sites shows that no Neanderthal populations were left after 40,000 years ago (although some Neanderthal genes do live on in some of us).

The primary question, then, is what caused this great population decline? Climate change? Shipman engages with this hypothesis — made much of in the literature — and finds it lacking, especially because it doesn't explain how Neanderthals were able to withstand the intense cold in previous eras.

Correctly, in my view, though, Shipman doesn't discount the impact of climate entirely. "What I suggest here," she writes, "is that the synergy between climate change and the invasion of modern humans created an untenable situation for Neanderthals."

One of my favorite parts of The Invaders draws an extended analogy between modern humans entering the Eurasian ecosystem and the (human-managed) return of gray wolves to Yellowstone National Park in 1995/1996 . The wolves' predation of elk has led to more aspen and willow trees in the park, a good outcome for moose, smaller mammals and birds. The carcasses of the wolves' prey benefited other predators. At the same time, and most significantly, the Yellowstone wolves kill "preferentially" their closest competitor, coyotes. Coyote density fell by 90 percent in core areas and by 50 percent overall.

And herein lies the parallel; Shipman lays out meticulous data that shows that when modern humans arrived in Eurasia "there was an ecosystem-wide crash involving many members of the predatory guild" — not only Neanderthals but also other species, including cave hyenas, cave lions, leopards and lesser scimitar cats. Wolves were unaffected — a key point I will return to below.

Shipman vividly describes what she calls "mammoth megasites" throughout central Europe, in today's Poland, Ukraine, Russia, Germany and the Czech Republic. The faunal assemblages at these sites, overwhelmingly attributed to modern humans rather than Neanderthals, are dominated by mammoth; indeed, they feature "staggering numbers of mammoth bones." Circular buildings made of mammoth bones, probably covered with mammoth hides, dot these regions.

Here is evidence of an invasive species dominating its landscape, adapting in unprecedentedly sophisticated ways. Ancestral modern humans' and Neanderthals' preferred foods overlapped significantly, but compared to moderns, the Neanderthals "suffered from a limited ability to keep warm, a high metabolic rate, a vigorous lifestyle, handheld [versus projectile] weapons, and the loss of much of the wooded habitat in which they were most successful at hunting."

Shipman's scenario of how modern humans outcompeted the Neanderthals without committing acts of violence against them makes a lot of sense in an ecological context. One red flag did rear up for me, however, as I read. The book's subtitle — How Humans and Their Dogs Drove Neanderthals to Extinction — and its jacket copy primed me to look in its pages for hard evidence that the domestication of the wolf played a prominent role in this process.

Reading along, I figured Shipman would make this the book's big finish. And she does begin to circle back to the fact that wolves are not negatively affected by humans in the predatory-guild crash. Around 35,000 years ago, people appear to have successfully bred what she calls a "wolf-dog" from wild wolves in an early attempt at domestication (though genetics tells us that these wolf-dogs were not ancestral to modern dogs directly).

Were these wolf-dogs acting as hunting companions to our ancestors, giving them that special adaptive edge? Shipman thinks the answer is yes, and makes a good argument for how wolf-dogs may have increased hunting success, for example, by aiding people in retaining carcasses in the face of competition from other animals.

At the end of chapter 13 (of 15 chapters), though, the reader comes across this flat statement by Shipman: "There are no well-dated Neanderthal sites younger than about 40,000 years ago; all are older. Unless future finds show wolf-dogs in even earlier sites, Neanderthals were extinct by the time wolf-dogs appeared."

This makes for a jarring note, and the discrepancy between it and the book's sensational subtitle — plus its cover that features animal-skinned-dressed male hunters walking along with wolf-dogs — nagged at me. Last weekend, I wrote to Shipman, and asked her a question: What do you say to the critical reader who feels that in the end there's no hard evidence to support the suggestion so central to the book's subtitle?

Shipman answered me this way:

"I would say to the reader: 1) The subtitle was at the editor's insistence. I reluctantly agreed. 2) We have sadly few good dates about the end of Neanderthals or the beginning of wolf-dogs. The chances we have the last of one or the first of the other are very small. So I would not be in the least surprised if more work makes the two events coincide. In fact, the recognition of the dating problems and the recognition of these wolf-dogs are both so very recent that I absolutely expect the two will converge. Expectations are not proof however. 3) Hypothesizing that the two will converge makes sense of so many puzzles that I lean strongly in that direction. That the two events (first known wolf-dog, last known Neanderthal) are only a few millennia apart is, for paleoanthropology with the hazards of dating, preservation differences, decent excavation etc., pretty darned closed to "simultaneous." Please bear in mind I am stating a hypothesis and some of the evidence I would expect/hope to find to support it."

That's a convincing reply. I'm pretty sure my quibble about the book, then, is with the marketing decisions made by the book's publisher, not with Shipman's science writing. (And while I'm at it, close editing could have avoided instances of "adaption" for "adaptation," and other minor errors).

Soon, Shipman followed up her initial message to me with another one. One theme of The Invaders, she noted, is about invasive apex predators.

"The second theme is that once humans allied with wolf-dogs (dogs), we formed an unbeatable team that was far more formidable in hunting than either alone. If this proves to have occurred after Neanderthals went extinct, then so be it because the appearance of a new invasive predator (us) was enough to cause serious and possibly crippling pressure on Neanderthals. If, on the other hand, our pact with wolf-dogs appeared while Neanderthals were still around, albeit in smaller numbers and more restricted areas, the domestication of wolves into wolf-dogs would have been a fatal innovation."

So, the invasive biology hypothesis holds either way: Our ancestors caused trophic cascades of changes around 40,000 to 35,000 years ago and contributed mightily to the dwindling of Neanderthal populations. As Shipman writes in the book, this perspective helpfully situates our ancestors "as part of nature and a vital part of the ecological community, not as an utterly separate creature that was exempt from ecological and biological rules."

The hype about the wolf-dogs is fun stuff, and Shipman's hypothesis on this score may turn out to be right. But it's the hard science on offer in The Invaders, the paleoanthropology and ecology about the period of modern human and Neanderthal overlap, that carries the day.