Accessibility links
A New Way To Think About 'God' : 13.7: Cosmos And Culture All traditional ideas of God are demonstrably inadequate to our time; they perpetuate conflict or fail to inspire us to rise to the challenges of today's world, says guest blogger Nancy Ellen Abrams.

A New Way To Think About 'God'

A New Way To Think About 'God' 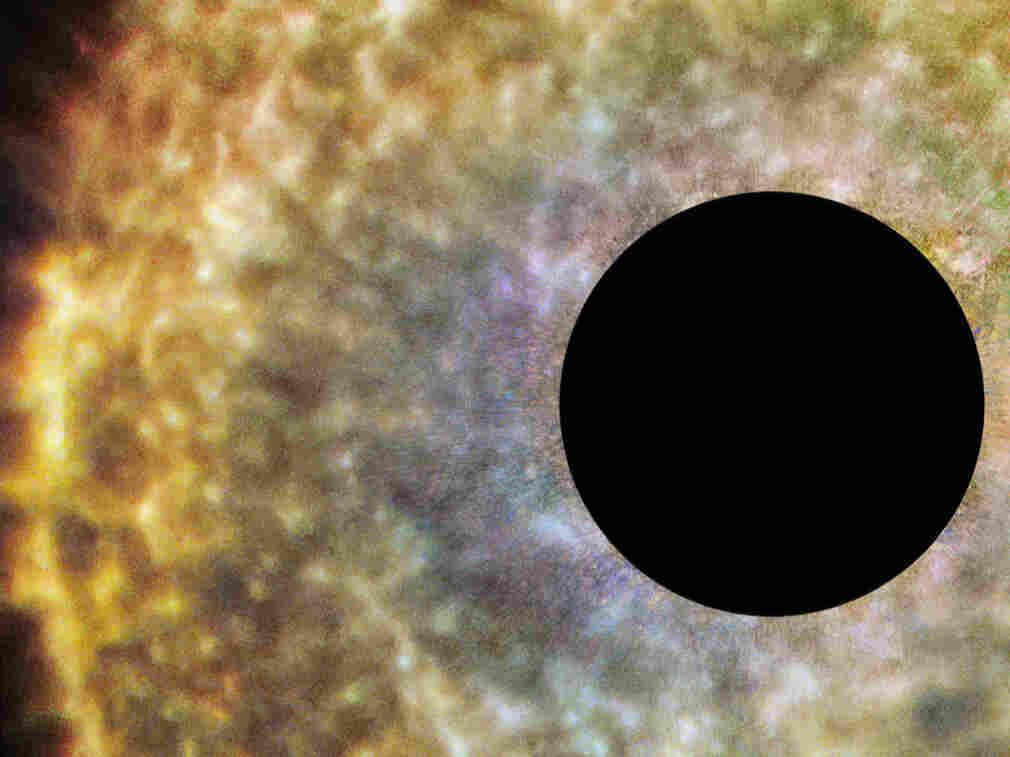 This Hubble Space Telescope image shows a star known as R Sculptoris, located 1,500 light-years from Earth, in the constellation of Sculptor. The black region at the centre of the image has been artificially masked. ESA/NASA hide caption 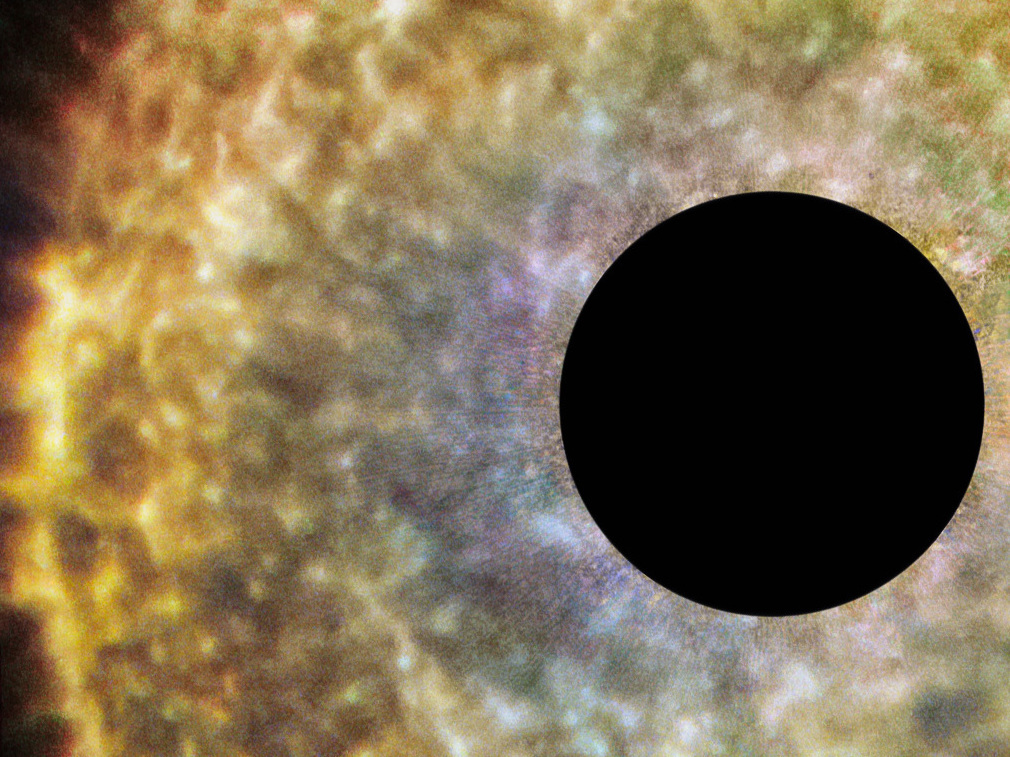 This Hubble Space Telescope image shows a star known as R Sculptoris, located 1,500 light-years from Earth, in the constellation of Sculptor. The black region at the centre of the image has been artificially masked.

There is no single meaning for the word "God." The idea of God and gods has been evolving and shape-shifting nonstop for millennia, and it's not over yet.

All traditional ideas of God are demonstrably inadequate to our time. They perpetuate conflict or fail to inspire us enough to rise to the existential challenges of our complex and dangerous world.

So let me propose a new way of thinking about God. Let me explain with an analogy.

Ants are very simple creatures. They can recognize a dozen or so pheromones (scent molecules) and can sense where those pheromones are more intense. They also can tell the difference between meeting two ants in a minute and 200 ants. That's about the extent of their individual communication abilities. But if we observe 10,000 of them in a colony, a "swarm logic" has emerged. The colony is continually adjusting the number of ants foraging for food, based on the number of mouths to feed, how much food is stored already in the nest, how much food is available in the vicinity, and whether other colonies are out there competing. Yet, no ant understands any of this.

The colony can engineer the construction of an ant hill as high as a man and as busy as a city, yet no one is in charge. Some ant hills can last a century. Over its lifetime, the colony will go through predictable stages of development, from aggressive youth to conservative maturity to death, yet no ant lives more than a tiny fraction of that time. What is going on? Where does swarm logic come from?

It emerges from the complexity of the interactions among the ants. An ant colony is self-organizing. Emergence is a powerful scientific concept that cuts across many fields — in fact, it happens throughout evolution. From the formation of galaxies to the evolution of life to the folding of proteins to the growth of cities to the disruption of the global climate, emergence creates utterly new phenomena out of interactions of simpler things.

Almost everything we humans do collectively spawns an emergent phenomenon. So, for example, people trading things has led to the global economy, an emergent phenomenon so complicated and unpredictable that not only does no one know the rules, but the professionals don't even agree on what the rules should be about. The never-ending effort to get people to behave decently toward one another has spawned governments. Our innate desire for gossip has spawned the media. Economies, governments and the media are all emergent phenomena — like an ant colony. They follow new and complicated rules that often cannot be derived from the behavior of the parts that make them up. They are real and have immense power over us, but they are not human or humanlike, even though they arise from human activities.

But we humans are not just traders, moralizers and gossips. Far beneath those behaviors, so deep it distinguishes us from the other primates, is this: We aspire. We aspire to different things, but we all aspire. Our aspirations are as real as we are. They are not the same as desires, like food, sex and security. Every animal has those desires from instinct alone. Aspirations reach beyond survival needs. Our aspirations are what shape each of us humans into the individual we are. Without aspirations, we are nothing but meat with habits. We humans are the aspiring species and may have been for hundreds of thousands of years.

Something new has to have emerged from the staggering complexity of all humanity's aspirations, interacting. What is that something — that emergent phenomenon both fed by and feeding the aspirations of every human being? It didn't exist before humans evolved, but it's here now, and every one of us is directly connected to it, simply by virtue of being human and having aspirations. It didn't create the universe, but it has created the meaning of the universe, which is what matters to us. Meaning, universe, spirit, God, creation and all other abstract concepts are themselves ideas that took form over countless generations, as people shared their aspirations to understand and express what may lie beyond the visible world. This emergent phenomenon has created the power of all our words and ideas, including ideals like truth, justice, and freedom, which took millennia to clarify in practice, and which no individual could ever have invented or even imagined without a rich cultural history that made it possible.

This infinitely complex phenomenon, which has emerged and continues to emerge from instant to instant, growing exponentially and shape-shifting, can accurately be said to exist in the modern universe. It's as real as the economy, as real as the government. It doesn't matter if you're Hindu or Christian or Jewish or atheist or agnostic, because I'm not proposing an alternative religious idea. I'm explaining an emergent phenomenon that actually exists in our scientific picture of reality. You don't have to call it God, but it's real. And when you search for a name for it, it may be the only thing that exists in the modern universe that is worthy of the name God.

We humans are entering an era of enormous danger. Chaos and injustice will inevitably accompany the changing global climate, and right now we humans don't have much to unify us in facing that. Our species needs every advantage we can possibly muster, and peace between science and God, peace between reason and spirit, would certainly be advantageous. For millions of thoughtful rational people to have no way to draw on their spiritual power is a tragedy.

The idea of an emerging God triggers as many taboos for atheists as for believers, but if you dare to try it out by moving in with all your furniture, the way scientists are willing to live inside a theory as if it's true — sometimes for many years in order to test it and discover its implications — I don't think it's an exaggeration to say it will transform your life. It has mine.

Nancy Ellen Abrams is an author, musician, lawyer and philosopher. Her latest book A God That Could Be Real, was released in March 2015. You can find her here and on Twitter: @cosmicsociety.