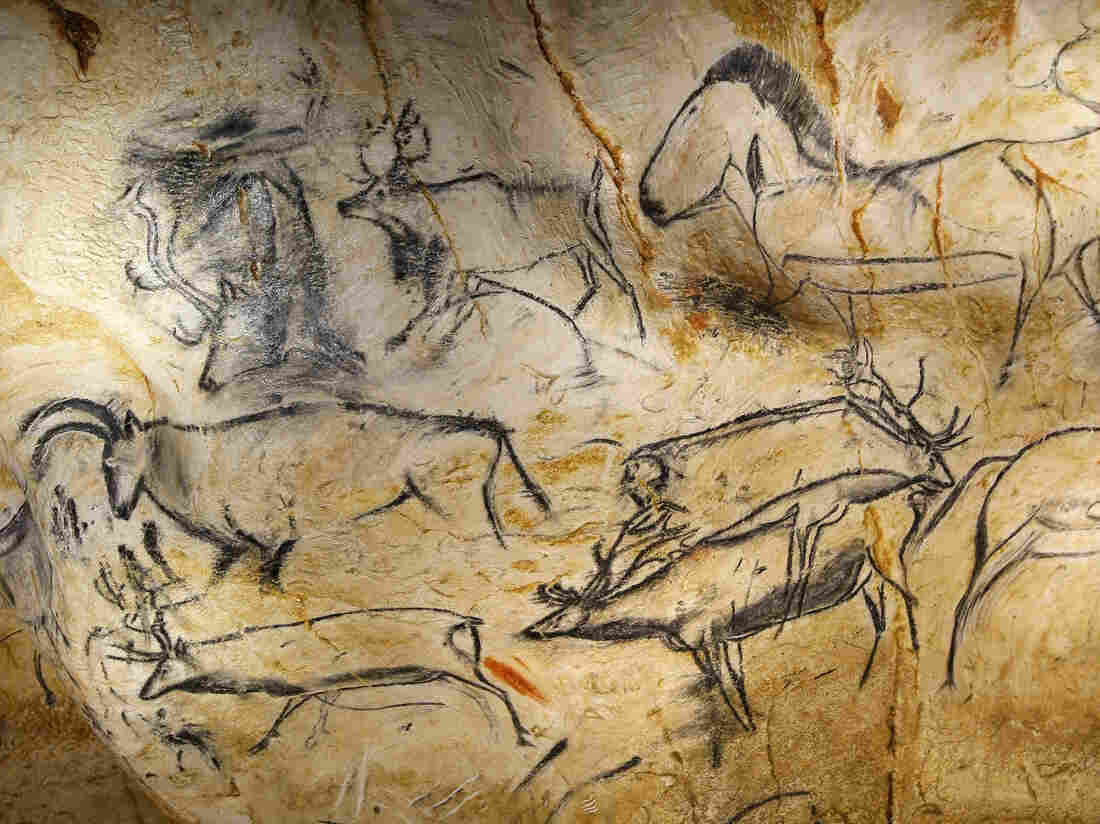 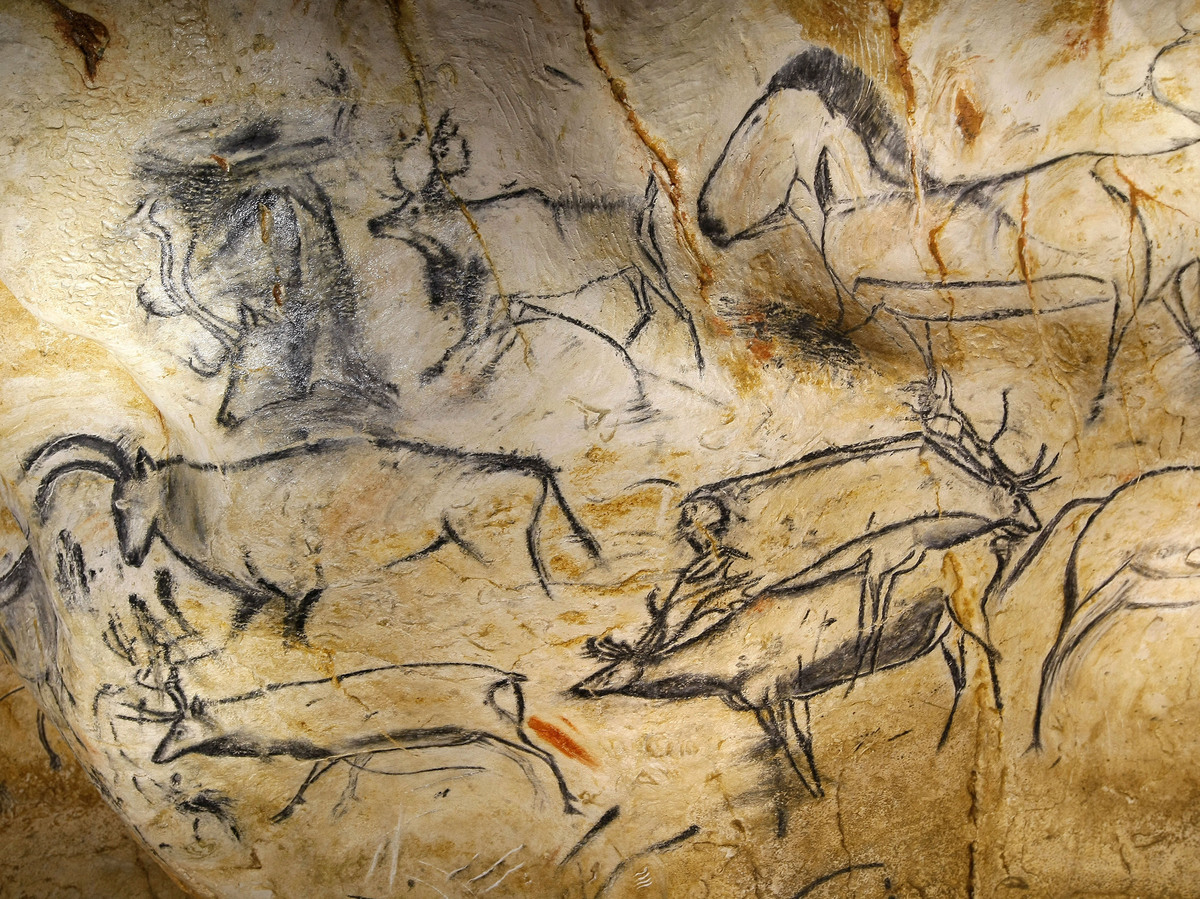 Drawings of animal figures in the life-size replica of Chauvet Cave in southern France.

Starting around 35,000 years ago, our ancestors painted — with accurate lines and glorious colors — images of lions, bison, mammoth, rhinoceroses, horses and even an owl on the walls of what is now called Chauvet Cave in south-central France.

If you have seen Werner Herzog's Cave of Forgotten Dreams, you have seen these images on film. Unless you are an archaeologist, art scholar or journalist, you almost certainly haven't seen them in person, as I have not; the cave is closed to the public in order to preserve the images' integrity.

Now, though, any of us with the means to get to France may view this ancient art in reconstructed form. On April 25, a $59 million replica of Chauvet and its painted walls (if a smaller-size version is properly termed a "replica") opened to global fanfare. That day, The New York Times reported on some of the artistic methods used to make the re-creations:

"Artists led by, among others, Gilles Tosello, an expert in this prehistoric era who is also trained in the plastic arts, painstakingly copied the paintings with the same materials the original artists also used, charcoal made from Sylvester pine trees and ocher paint made from minerals."

What was it like for Homo sapiens to live in a world teeming with lions, bison and mammoth? What moved the artists of the original to create these gorgeous representations? Why did they choose not to paint themselves, or the rivers and trees in the surrounding landscape but, instead, almost always animals? What did the animal paintings mean to them?

Lingering over a virtual tour of the original cave, I can't help but think how moving it must be to walk inside those walls, where the artists worked 25,000 years before the time of the Egyptian pyramids.

A visit to the replica cave will undoubtedly bring cognitive rewards to anyone interested in human evolution. Optimistically, I hope it may even open up the vistas of time to evolution deniers who don't accept the fact that our species has been around for 200,000 years and our lineage for 6 million more.

But will the replica images move people? Would they move me? I wasn't so sure. They are, after all, fakes.

Yesterday, I asked Alva Noë, my co-blogger here at 13.7 who has written about questions of copying and reproduction in the art world, whether he thought it's natural to feel differently in the presence of replicated images than we do in the presence of the genuine ones.

"While I acknowledge your intuition that this is a natural response," Alva told me by telephone, "it's really interesting how often in our culture we do treat replications like the original. I can think of dozens of examples where something new is inserted into our rituals, practices and relationships in a way that lets it take on the value and meaning of something old."

Alva recounted for me the story of Paolo Veronese's 1653 painting The Wedding at Cana, stolen from a monastery in Venice in 1797 by Napoleon. Napoleon's soldiers cut the painting in half and shipped it to Paris as war booty, where it still hangs today in the Louvre.

In 2007, Italy commissioned a facsimile to be made of the painting by a company called Factum Arte. Alva explained:

"The restorers did a profound study of the original using the most cutting edge engineering and technology available at the time; it was a product of artistic love and engagement, done using science as an art project. For the people of the Italian community where that painting came from, it's as if the painting has been returned, reinserted exactly into its original place. It's as if the replica is able to be the original and carry the original life of the painting. The one in Paris is physically identical to the original, but it's just a museum piece; the other is back where it belongs in the church."

Alva wasn't intending a direct analogy between The Wedding at Cana and the Chauvet animal images because, of course, the Chauvet images have all along remained where they belong — in the original cave.

Instead, what Alva endeavored to do, I think, was refocus my thinking a little — away from only the static images as "real" or "fake," and toward the dynamic process of creation by the artists, whether 35,000 years ago or in the 21st century.

Thinking of it this way, I see that the reconstructed Chauvet images, brought to life in their new location through intense study and care, may indeed "carry the original life of the painting(s)." If so, those replicas are closer to our ancestors' art than I would at first have imagined, and bring us closer to our own creative evolution than we might otherwise become.