Accessibility links
Climate Denialists In Congress Acting As NASA's Kryptonite : 13.7: Cosmos And Culture NASA, with all its heroism and accuracy, is like Superman to many Americans — and denying the agency the funding it needs because of its position on climate is wrong, says astrophysicist Adam Frank. 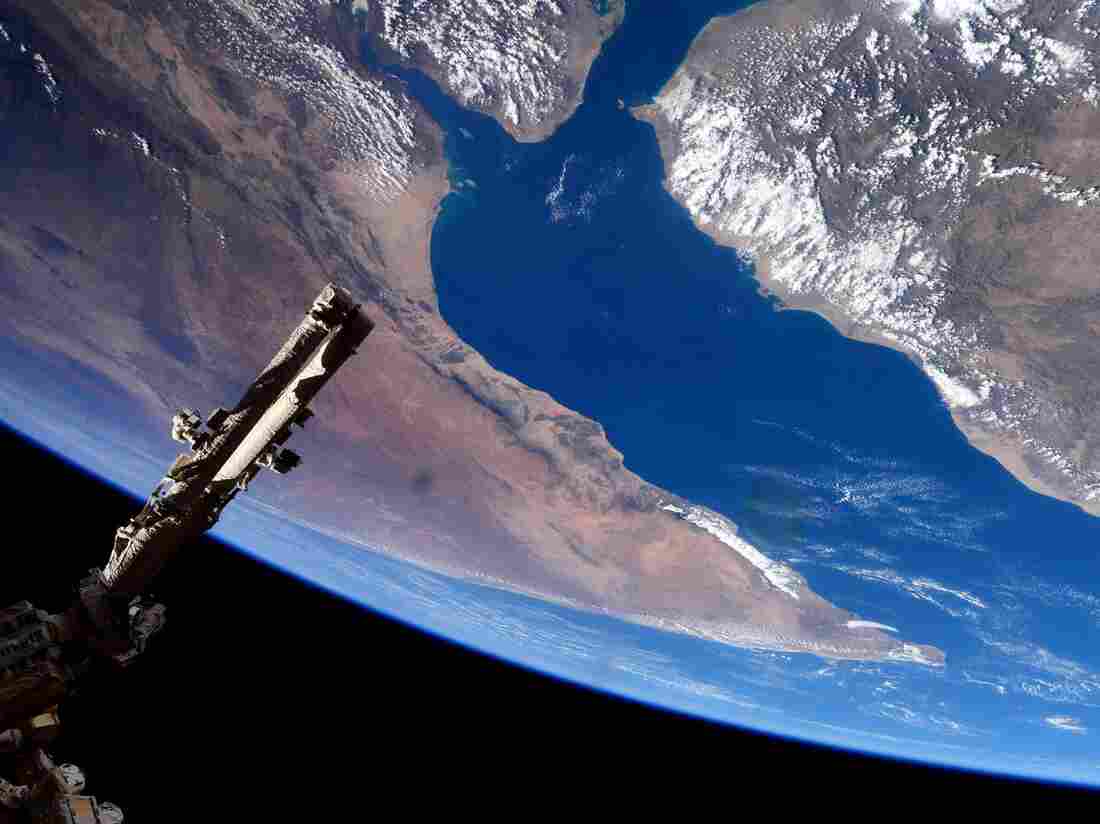 The Gulf of Aden and the Horn of Africa as seen from the International Space Station. Samantha Cristoforetti/NASA/ESA hide caption 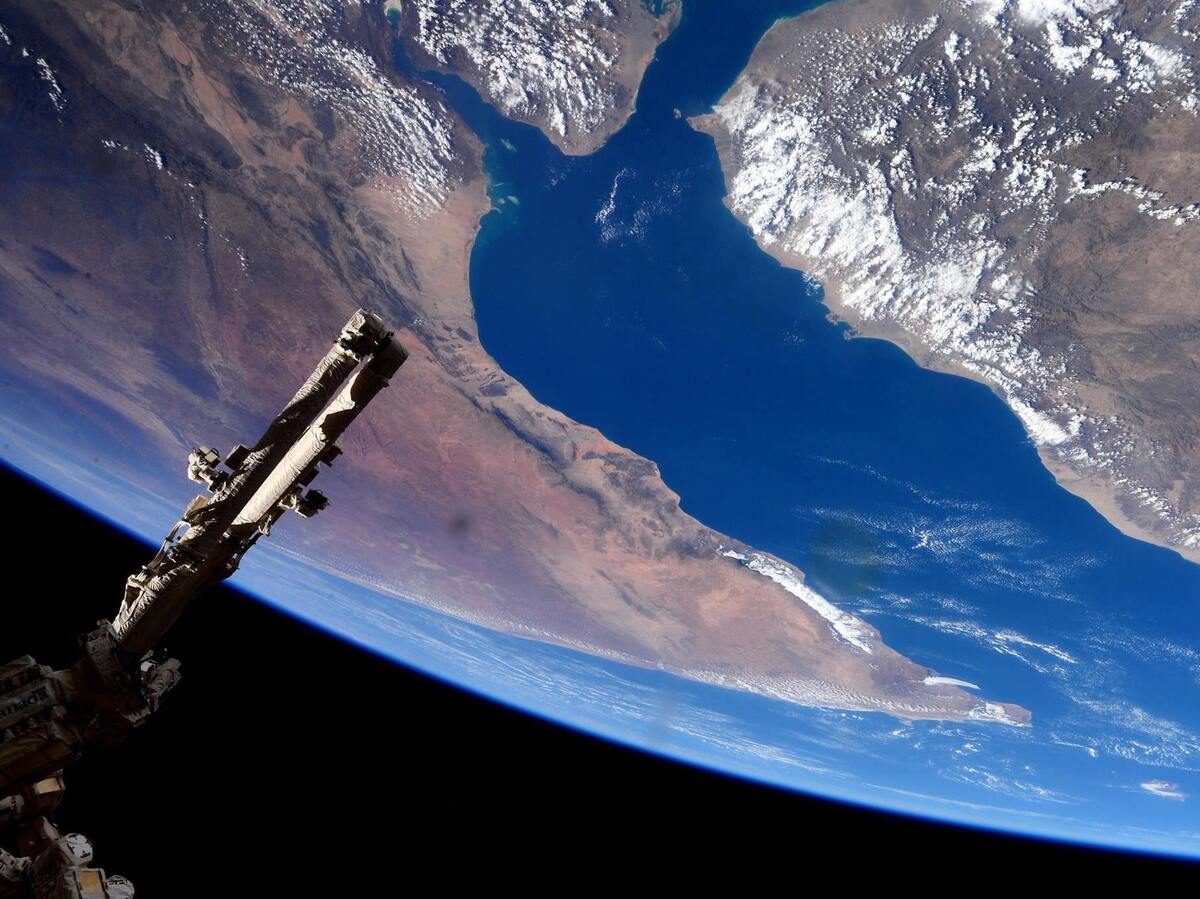 The Gulf of Aden and the Horn of Africa as seen from the International Space Station.

Quick: List the first four words that pop into your mind when you hear NASA.

If you are like most folks, you hit some mix of astronauts, moon landings, space telescopes and Mars probes. Those are pretty positive images representing accomplishments we can all feel proud about.

Astronauts are, after all, great American heroes. And space telescopes are reminders of just how smart — and insanely capable — Americans can be. Put it all together and you can see why NASA does superhero stuff in the eyes of most people.

It's also stuff that's universally recognized to be the kind where you absolutely, positively can't afford to be wrong. And that is why NASA is a real problem for climate denialism.

If you are intent on convincing people there is no climate change, then the last thing you want is NASA — with all its heroism and accuracy — telling folks climate change is real. So, faced with this dilemma, climate denialist's have come up with a clever solution: Get NASA out of climate change science.

As has been widely reported, the House Science, Space and Technology Committee recently approved a bill that would cut at least $300 million from NASA's earth-science budget. This comes after the head of the Senate committee overseeing NASA claimed the agency should stop doing earth-science and focus only on space exploration.

Both these moves are part of a broader effort to hobble American science from doing its job in exploring the planet's climate. As reported by Elizabeth Kolbert in the New Yorker:

"The vote on the NASA bill came just a week after the same House committee approved major funding cuts to the National Science Foundation's [NSF] geosciences program, as well as cuts to Department of Energy programs that support research into new energy sources."

But even with the broader effort, the emphasis on NASA seems particularly pointed. How many people even know what the NSF stands for — or what the National Oceanographic and Atmospheric Administration (NOAA) does all day?

So, when NASA tells us that Earth's climate is changing because of human activity, it carries a lot of weight. It's a weight climate denialists have a hard time bearing up under.

Honestly, when it comes to getting the science of climate change right, who are you going to believe? A radio talk show host or NASA? The angry denialists in the comments section of this blog or NASA? The politician who says, "Well, I am not a scientist" or the scientists at NASA?

The answer is pretty clear.

That's why, if your goal is denying the climate science NASA has been doggedly revealing for decades, you have a real problem. You must convince Americans that either (a) NASA is lying or (b) NASA has gotten the answer wrong. Both are going to be a hard sell.

Given that we all can see much of what NASA accomplishes in other arenas with our own own eyes, it's hard to imagine why the space agency would have taken to only lying about climate change. And, as for NASA and the idea of getting the answer wrong, there are just two words you have to remember: Sky Crane. If NASA can land a mini-van-sized rover on Mars by lowering it onto the surface via a rocket-powered tether line, getting the answers right must be in the agency's DNA.

So, now you can see the embarrassing state of affairs in which climate denialists find themselves. NASA is our best-known force for scientific and technical understanding. But that same NASA is telling the world that climate change is very real and needs to be taken very seriously. Superman has spoken. In response, the only thing folks in the climate denial business can come up with is to gag Superman.

But here is the big problem with this gag approach. There are very real consequences that follow from taking NASA out of climate science. Decades of expertise in satellite remote observing, crucial to unpacking the complexities of the Earth's system, could be lost. And once that expertise is gone, you can't just flip a switch to bring it back. As NASA head Charles Bolden put it, the move proposed in Congress "guts our Earth science program and threatens to set back generations worth of progress in better understanding our changing climate."

Anyone who reads comics knows the real problem with taking Superman out of the picture. He won't be there when we need him most.

Postscript: Since it's bound to come up, it's worth noting that in 2012 a group of 49 retired Apollo-era NASA astronauts and engineers sent a letter demanding the agency refrain from "unproven and unsubstantiated remarks" regarding how human activities are causing global climate change. But, as you can read here, another Apollo-era astronaut, Russell Schweickart, has noted, "none [of the letter writers], to my limited knowledge, are what I would consider qualified climatologists." Also, here is a beautiful meditation on the Earth and climate change as seen from space by current astronaut Col. Chris Hadfield (of Major Tom fame). Hatfield says "we are obviously changing the climate."