Accessibility links
Viewing Octopus Choreography In Captivity : 13.7: Cosmos And Culture Anthropologist Barbara J. King spends a morning with an octopus in an effort to find out how to make life better for sentient, smart creatures on public view. 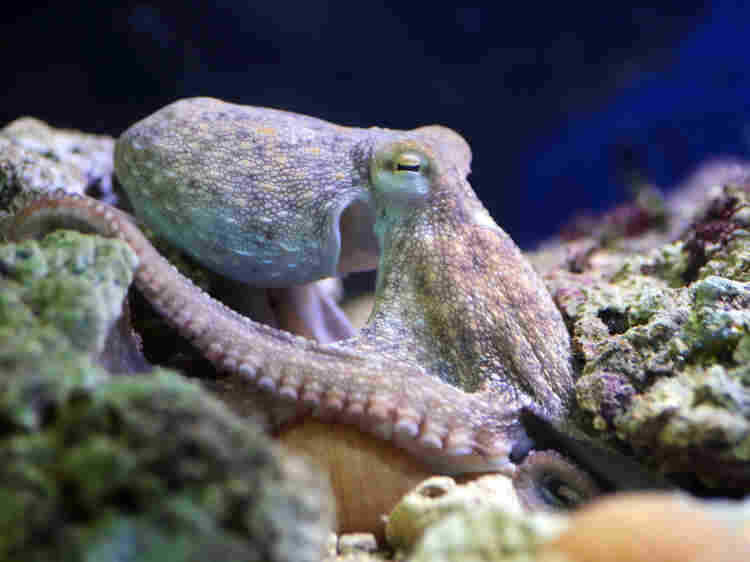 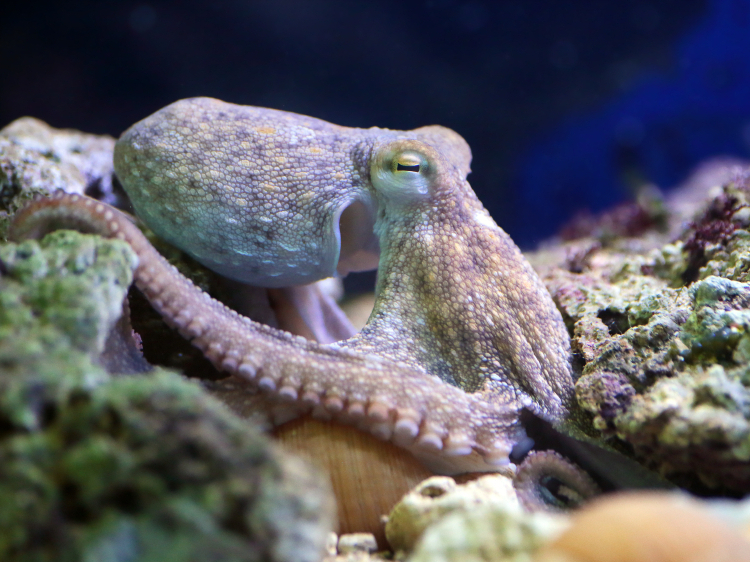 The Cambridge Declaration on Consciousness, crafted in 2012 by a group of international scientists, states that octopuses — the only invertebrate animals mentioned — are conscious animals capable of intentional behavior. Books, articles and blog posts tout octopus intelligence.

Recently, I spent the morning behind the scenes with an octopus at the Virginia Aquarium and Marine Science Center — and, suddenly, the science of octopus cognition came to colorful life. I observed an enrichment session with the aquarium's common octopus, a representative of the largest octopus species in the Atlantic Ocean. I got to see a very active cephalopod, one whose chromatophores were active, too, so that I witnessed shade changes from red to dark red as the octopus telegraphed information about her behavioral state.

I started by asking about this individual octopus. From senior curator Beth Firchau and aquarist Evan Culbertson, I learned that the octopus (who has not been given a name by the aquarium): was wild caught in North Carolina waters; is probably about 3 years old, judging from the size of the mantle and, thus, unlikely to live much longer; and is most likely a female, given the evident lack of specialized arm features a male uses to deposit sperm into a female.

Daily, the octopus experiences some tactile, food and/or mechanical enrichment, as the aquarium endeavors to keep this most cognitive of invertebrates engaged in her environment.

The octopus exhibit, I found out, was designed years ago after aquarium scientists traveled offshore to look at natural octopus dens. Because there's not much natural rocky rubble — prime octopus habitat — off the Virginia coast, in this area octopuses often build their dens near human-made features, like rip-rap structures or light towers. Based on the dens they saw in the wild, the scientists designed a 120-gallon enclosure (only one-third of which is visible to the public), with subdued lighting and recessed areas to which the octopus may retreat. Water quality must be high and is consistently monitored,

Firchau emphasized that the balance sought is between animal welfare and presentation to the public. The octopus should feel safe, and not stressed, but also be visible.

On this morning, Culbertson had already cleaned the octopus habitat, which resulted in tactile enrichment for the octopus, who often chooses to touch the aquarist or the cleaning equipment. When I arrived, Culbertson used a randomized computer program that selects the mechanical type of enrichment to be used on any given day: The "hamster tube with pegged block" was our morning's item, a colorful oval tube with small open holes into which were inserted rewards of food (peeled shrimp) and objects (small toys, essentially).

The next 30 minutes were fascinating. Immediately after Culbertson put the ring into the tank, the octopus pulled it deeper into the water, "tented" over it with her body, and began to explore the holes with her tentacles. From my reading, I knew I was watching a choreography of information-gathering behavior. Octopus arms are neuron-studded and we might think of their brain as distributed over their body.

For 30 straight minutes, the octopus was occupied with the ring and its enclosed food and object rewards. (I later learned that she hadn't been offered the hamster ring since Feb. 16, about three months before, so the comparative novelty of the object probably added to the intrigue.) The octopus broke the ring open and gradually manipulated (or ate!) the rewards. Her motions appeared to me purposeful, and her chromatophore changes indicated possible excitement. Right around the half-hour mark, the octopus released the ring and drifted off.

Using a 1-5 scale with precise behavioral criteria assigned to each number, Culbertson rated the session a "5" for the octopus's interest and "5," as well, for success in terms of visibility to the public: The best outcome. Every three months, the "octopus team" evaluates which enrichment objects work well and drops from the rotation those that don't.

Why does all this matter, beyond giving me an enjoyable experience?

I worry about the welfare of some animals held in captivity and regret that this octopus was taken from the wild to spend her short life on exhibit. As I argued last week, writing for the magazine Aeon, the more we learn about animal cognition and emotion, the more we are obliged to work toward keeping animals in their safe and healthy natural habitats (a tall order, to be sure).

When sentient animals do live in captivity, it is our obligation to care for their minds as well as their bodies. The octopus I met at the Virginia Aquarium, nearing the end of her life now, responded to her thoughtfully designed enrichment session with curiosity and intelligence and — at least if this vertebrate can read an invertebrate's mood correctly — a cephalopod's brand of pleasure.