Accessibility links
Does Mindfulness Mean Anything? : 13.7: Cosmos And Culture As the popularity of mindfulness meditation grows, questions about its effectiveness from both a scientific and a spiritual perspective will continue to be debated, says commentator Adam Frank.

Does Mindfulness Mean Anything?

Does Mindfulness Mean Anything? 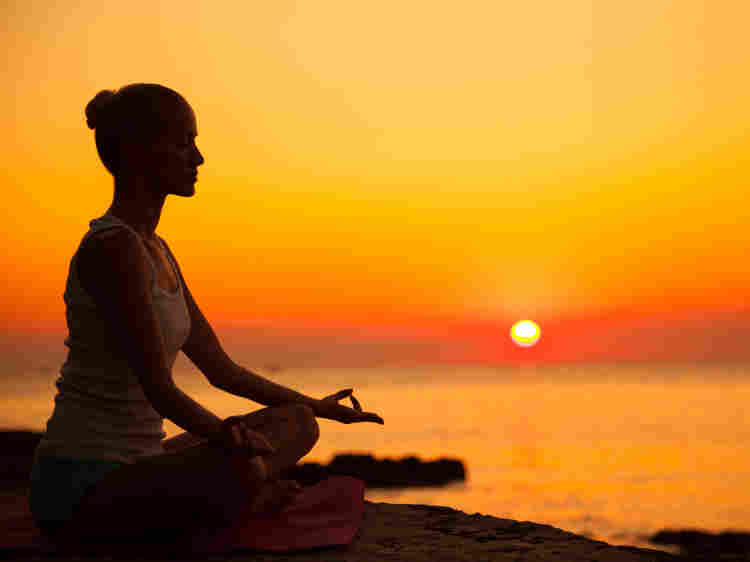 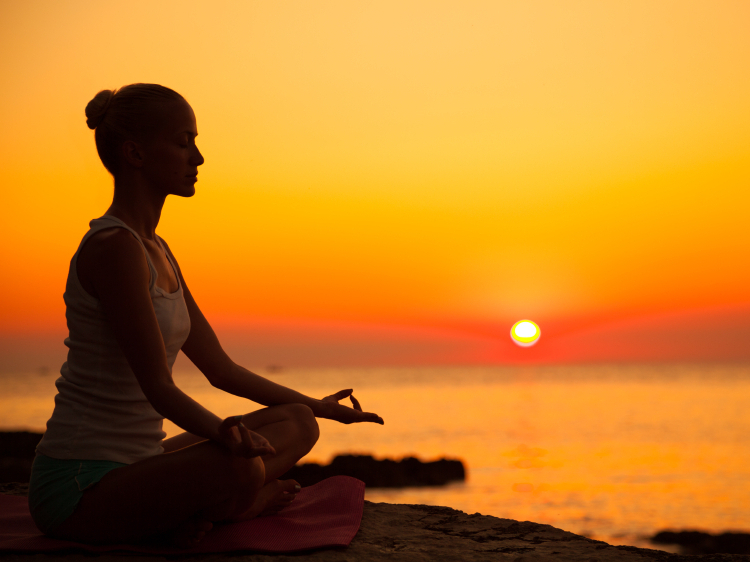 We are in the middle of a mindfulness revolution.

According to Time, The Huffington Post and a host of other media outlets, mindfulness and meditation are having their moment in the spotlight. From hospitals to corporate wellness programs, mindfulness is — supposedly — a new path to relieving stress, lifting depression and increasing happiness.

But, depending on your perspective, the advent of mindfulness and meditation in America is either a milestone in the evolution of the culture — or a mighty avalanche of hype.

Given our ongoing discussion of science and religion here at 13.7, there are two particularly relevant questions the mindfulness explosion asks us to tackle. First, what exactly does mindfulness mean in relation to the spiritual practices it emerged from (mostly Buddhism). Secondly, how much do health claims made for mindfulness bear up under scientific scrutiny?

Before we begin, however, I need to make a full disclosure. For most of my life I've been staring at a wall in "contemplative practice" for at least a half hour per day. In other words, I'm a card-carrying meditator. Most of my practice has occurred within a Zen context but I have explored other traditions, as well. I could spend a lot of words telling you why I am committed to contemplative practice but, for now, let me just say I've learned things that I consider very, very valuable.

Let's begin by asking what, exactly, is meant by mindfulness or mindfulness meditation. The answer can be slippery, since the term gets used in different ways by different teachers (whose training can vary from "decades" to "not much at all"). In spite of that variety, the modern mindfulness movement owes a lot to the Mindfulness Based Stress Relief (MBSR) program developed by Dr. Jon Kabat-Zinn.

Dr. Kabat-Zinn, a longtime Buddhist practitioner, developed the program at the University of Massachusetts Medical Center more than 30 years ago. He was seeking to explore the effectiveness of meditation for a variety of conditions from psoriasis to chronic pain. A typical MBSR course lasts eight weeks, during which time students learn basic techniques of meditation, such as following the breath or doing internal scans of the body to become more present.

By almost any measure, MBSR has been a huge success, opening doors to the scientific study of meditation and getting thousands of people to learn how to just slow down. And many other meditation programs calling on folks to stop and pay more attention to their inner lives have sprouted from MBSR.

So, what's the problem?

Let's take on the science first. There have been many studies showing the effectiveness of meditation for different conditions (particularly those related to stress). But a meta-review of these studies by the Association for Health and Research Quality showed only moderate evidence for the effectiveness of mindfulness meditation. This overarching review study didn't necessarily say the effects were not there. Instead, it told us that, taken together, the quality of the studies (based on sample sizes, research protocols, etc.) were not strong enough to support the strong conclusions many mindfulness advocates hope for.

The recognition that more is being made of mindfulness research than the research can support has led some scientists in the field to call for a kind of "time out." For example, in an article in Tricycle magazine, Brown University professor Catherine Kerr points to news outlets like the The Huffington Post and calls foul:

"The Huffington Post features mindfulness a lot and tends to represent only the positive findings (and in the most positive light imaginable) rather than offering a balanced reading of the science. They use that approach to justify the idea that every person who has any mental abilities should be doing mindfulness meditation. I don't think the science supports that. The Huffington Post has really done mindfulness a disservice by framing it in that way."

Of course, The Huffington Post is not alone in hyping mindfulness. For Kerr, who runs the Contemplative Studies Initiative and leads a mindfulness research program at Providence's Miriam Hospital, the issue becomes how the public receives the hype and what it means.

As she says, "The message [these stories] deliver becomes a ubiquitous, circulating meme that people put up on their Facebook pages and that becomes "true" through repetition alone." But, according to Kerr, the claims are of the kind even the scientists doing the research wouldn't support. As she put it:

"Scientists are, for the most part, circumspect about making claims for cures attributed to mindfulness. The science doesn't support that. Scientists know from looking at meditation trials that not every person benefits from mindfulness therapies, but this is something non-scientists seem to have difficulty with. Individuals should not make clinically based decisions based only on neuroscientific studies because the sample sizes are too small."

Pointing to specifics of stress and depression she adds:

"The clinical trial data on mindfulness for depression relapse, for example, is not a slam-dunk. The results are really not better than those for antidepressants. In general, mindfulness is not orders of magnitude stronger than other things that people are doing right now to help manage stress and mood disorders. So you have to look at mindfulness in the context of a range of options."

In other words, the research is still too incomplete to support the strongest claims for scientifically grounded benefits from mindfulness. It doesn't mean they aren't there or that there aren't effects, it just means we don't really know yet.

But, in the midst of that uncertainty, comes the second point about the context of mindfulness. While many people want to reduce their stress and deal with depression, it's doubtful all those folks also want to become Buddhists. But the Western conception of mindfulness meditation emerges directly from Buddhism and its emphasis on contemplative practice as one (but only one) tool for engaging in a spiritual path. And Buddhism is, without doubt, a spiritual path.

There are many fascinating aspects of how Buddhism has manifested in Western countries. But the most interesting aspect, perhaps, is the assumption that Buddhist practices, including meditation, can be stripped of their context and secularized for "wellness." As Buddhist scholar David McMahan of Franklin and Marshall College puts it in a Tricycle interview:

"Right now, for the first time ever, we have contemplative practices derived from the Buddhist tradition that are being practiced completely independently of any Buddhist context. Secularization has filtered out what we would call "religious elements." It is those religious elements, those ethical elements, and those intentions that have always formed the context of meditation and that have made meditation make sense."

Losing these religious, spiritual, ethical aspects of meditation as a practice when it's transformed into mindfulness is what worries many Buddhist teachers. Traditionally, Buddhist practice was meant to be radically transformative and a means, among other things, of awaking to the reality that, on the deepest levels, the "self" is an illusion. But by stripping away this context into just "mindfulness," many teachers fear the powerful transformative effects of the tradition will be watered down so completely that it becomes just a tepid form of "self-help."

Thus, as the popularity of mindfulness meditation grows, questions about its effectiveness from both a scientific and a spiritual perspective will continue to be debated. From my own standpoint, while I understand the concerns my friends who are meditation teachers (Buddhist or otherwise) have about mindfulness, I agree with McMahan when he says:

"I know people who are not interested in being Buddhists or studying Buddhist philosophy who have really benefited from stripped-down mindfulness practice. So I'm not in a position to say, "Oh no, you shouldn't be doing this unless you can read Nagarjuna [a 3rd century Buddhist philosopher]!"

In other words, practiced with open eyes, anything that gets us to slow down and awake more fully to our interior lives should be a good thing.