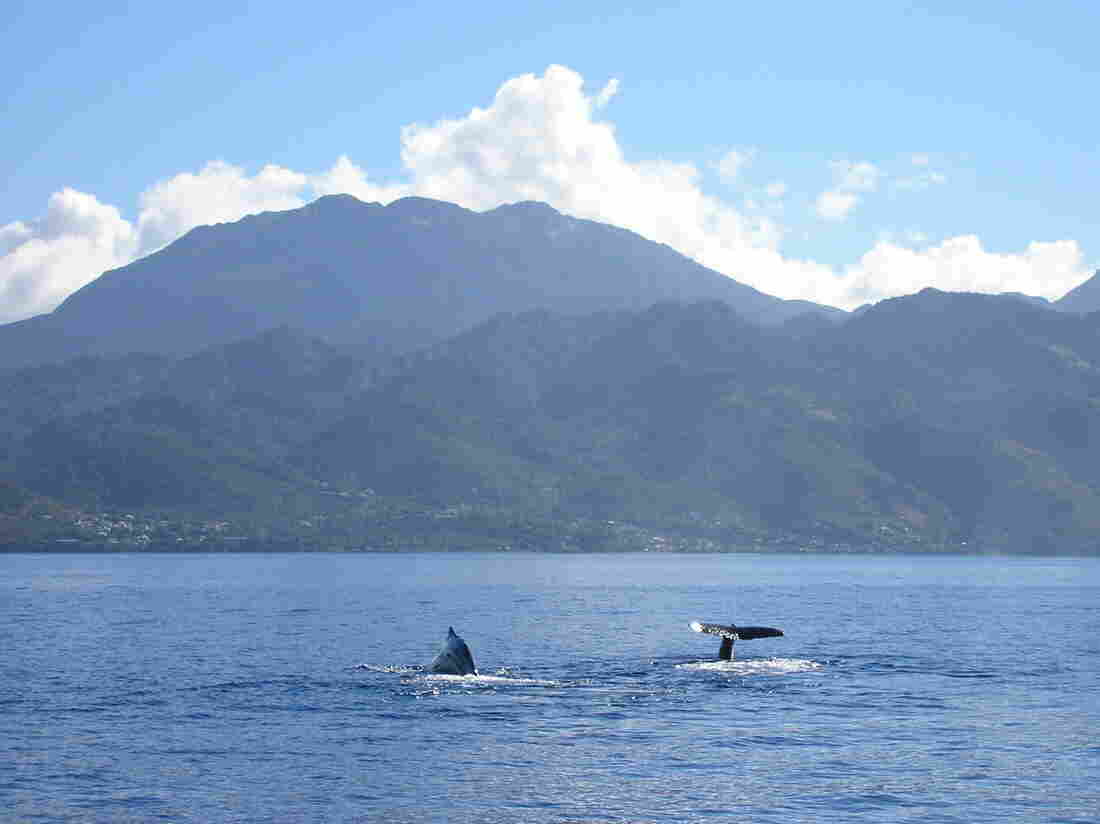 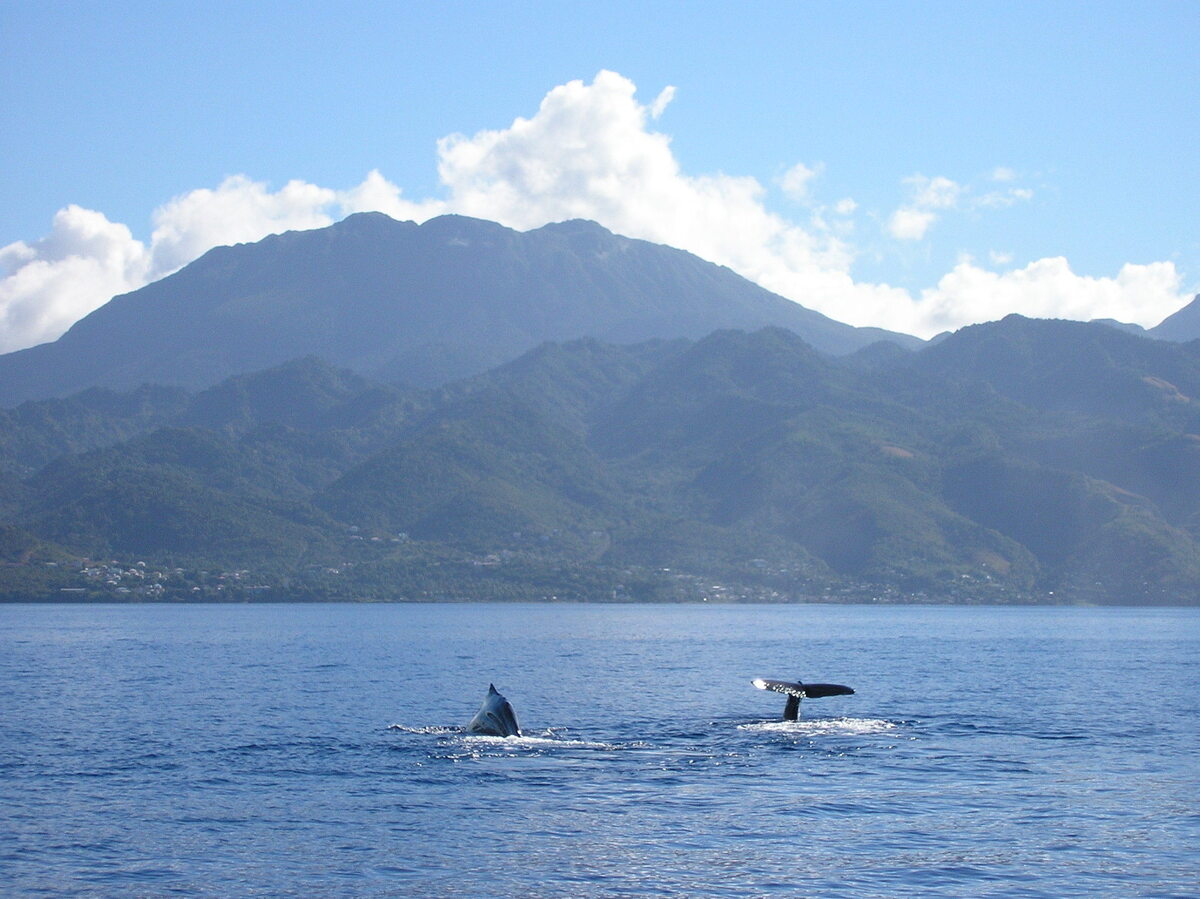 Two sperm whales, members of a social unit named "The Group of Seven," begin a dive together in the deep waters close to Dominica, West Indies.

The idea that our oceans teem with cultural animals — and have for millions of years — is the central conclusion of a new book by two whale scientists. And it's a convincing one.

Whales and dolphins, as they forage for food and interact with each other in their social units, may learn specific ways of doing things from their mothers or their pod mates.

Certain killer whales (orcas), for example, learn to hunt communally with such precision that they cause waves to wash seals — of only certain species, because other seals are rejected as prey — off their ice floes and into the sea. And the complex patterned songs of humpback whales evolve so quickly over time and space that only learning can explain it.

"The song being sung at any location can change dramatically into an entirely new form, with new units, new phrases, and new themes within less than a year," write authors Hal Whitehead and Luke Rendell in their book The Cultural Lives of Whales and Dolphins. "A revolution, rather than an evolution."

The two scientists, who have been studying sperm whales for a collective half century, offer this working definition of culture: behavior that is shared by some identifiable group such as a family, community or population, and that is acquired by learning from others.

For culture to be ruled in as the primary explanation for some behavior, then, genetics and features of the habitat in which the marine mammals live should be ruled out.

Rendell and Whitehead stake out provocative positions — for example, that language isn't necessary for culture to exist — that ensure cross-talk from anthropologists who insist that language and symbolic meaning-making sit at the core of culture. Intrigued by these ideas, I asked Whitehead and Rendell some questions by email; their answers are edited for length.

In the book you write that, hands down, the best example of cetacean culture is the song of the humpback whale. Why is this?

Often, the biggest challenge in identifying culture in wild animals is the "learning from others" bit — how do we know that animals did or did not learn a behavior from others? It's hard to show definitively without doing things like cross-fostering or rearing in isolation, which are logistically impossible and/or ethically dubious for whales and dolphins.

However, humpback song is shared, it changes over time, and, crucially, those changes are also shared — whole populations switch songs at the same time. We don't have to do anything but observe it to know that there's no explanation other than learning from others that can account for this.

Your section on orcas' communal intelligence just astonished me. Could you cite one or two specific findings about orcas in this regard that strike you as most revealing?

Bob Pitman's accounts of killer whales hunting seals from ice floes are astounding. The animals fan out to find targets, selecting only particular species, coordinate their swimming, synchronizing fluke-beats, to deliver precisely targeted breaking waves over the unfortunate seals, and then share the kill afterwards. If only we could know more about how individuals learn to do this!

When I posted about your book on my Facebook page, anthropologist Jonathan Marks, whose restriction of "culture" to a set of linguistic-symbolic-historical practices of our species alone you take issue with, reposted it. There, Alex Golub, also an anthropologist, left a comment, and I reprint it here with Golub's permission:

"I haven't read the book and I'm offended by under-theorized accounts of 'culture', not the idea that whales have it. So: Do whales possess arbitrary and conventional symbolic systems that they draw down to presuppose and entail mutual understanding in interaction? Because if they do, then they are sociocultural beings."

How would you respond to Golub?

Let start by saying we're not trying to claim whales have culture like humans have culture. That would be absurd.

Anthropological notions of culture, developed with humans as the test, type, and unique specimen, identify symbolic meanings as a key, even defining, element. Insofar as such meanings underpin language, they are indeed a key part of human uniqueness, although we would point out that there is plenty of human behavior, such as geographic variation in cuisines, that is clearly cultural, but doesn't necessarily involve symbolic meanings.

There is some circumstantial evidence for "arbitrary and conventional" symbols in whale culture. Sperm whale coda types may serve as "symbols" to identify particular clans, and killer whale dialects may have features that identify and represent matrilines [groups of related females]. But we don't know for sure.

Crucially, we would first need a notion of symbolic meaning operationalized to allow us to identify its existence in non-humans. We've no problem with the hypothesis that symbolic meanings have uniquely transformed human culture, but our perspective is more focused on the evolutionary consequences of adding cultural transmission as a means of moving information between individuals, so we think about how culture has transformed evolution, in humans, whales and other animals, with symbolic meaning being one impact of cultural practices on human thought.

So we don't want to talk about "culture" vs "not culture" or "proto-culture" or "tradition" — we would rather talk about human culture, humpback culture, chimpanzee culture, crow culture and so forth, and learn, by comparing and contrasting them, about both ourselves and these other species.

This conversation across disciplinary lines is valuable and, I hope, pushes all parties to further refine their terms and examples. Perhaps the very broad and basic working definition of culture set out by Rendell and Whitehead is, in a sense, slightly misleading, making it seem as if whale and dolphin social learning is relatively simple. Clearly, this is not the case.

As they hint above, Whitehead and Rendell even suggest that "cultural identity" might not be limited to humans. "Despite contact between cultural groups and, in the case of sperm whales, transfer of individuals between them," they write in the book, "the groups remain sharply defined by their vocal dialects." If group identity is part of the meaning-making of whales, then human cultures really do share more with some animal cultures than we have ever before known.

A comparative approach to culture (one that goes deeper than a mere listing of which animals learn to use which tool in which contexts) is promising and will lead to sharper understanding of how killer whale culture is, and is not, like sperm whale culture and chimpanzee culture and elephant culture and human culture.

Whales and dolphins face pressures in their ocean from anthropogenic climate change, and Rendell and White think they may be able to adapt through culture, at least to some degree. That's a hopeful note, but they strike it even while urging all of us to help protect the ocean and its animal cultures.