Accessibility links
What Is The Psychic Toll Of Gun Violence? : 13.7: Cosmos And Culture The likelihood that any one of us would be caught up in a mass shooting is low. But anthropologist Barbara J. King asks: Is any one of us left unaffected by gun violence? 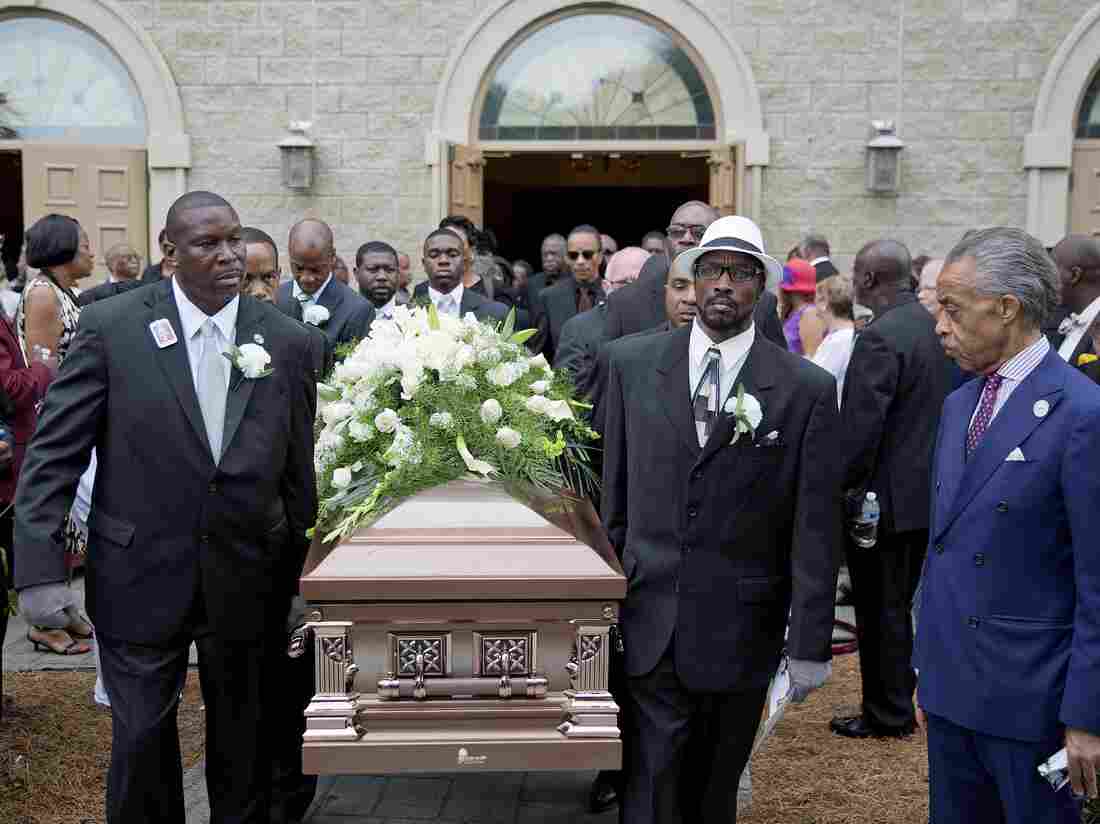 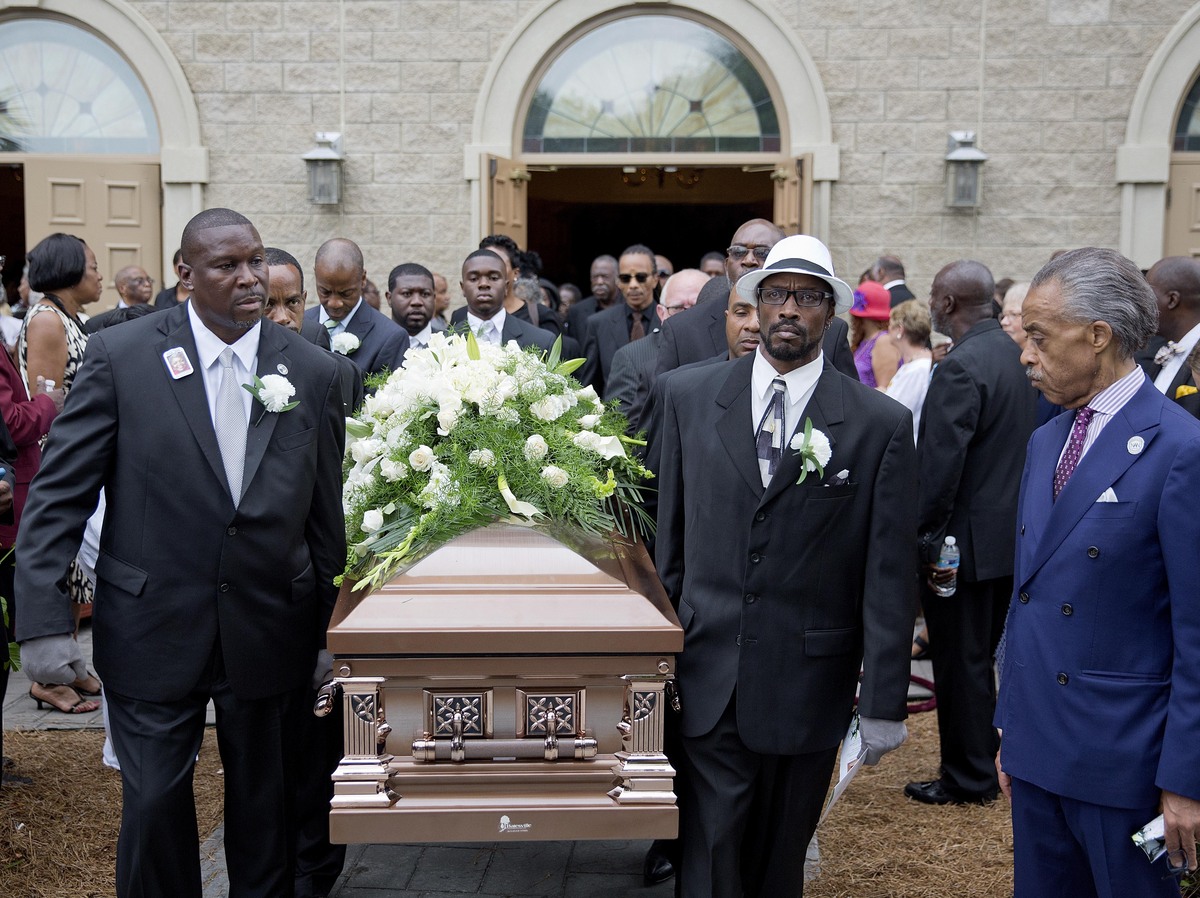 The casket of Ethel Lance is carried to a hearse following her funeral service on June 25. Lance was one of nine people killed in the shooting at Emanuel AME Church in Charleston.

There's a lot of debate about how to define a mass shooting.

According to a recent NPR report, mass killings happen every two weeks in the U.S. — as defined by the FBI.

Some say the if the shooter dies, this person should be included in the number of victims. Others say no. Some say that the number of people shot, not the number who die, should be counted. Some say it should be considered a mass shooting whether or not it takes place in a domestic situation, or at a home versus a public place. And various interested groups define it differently, which caused some debate in the comments section of Tania's post on the topic Monday.

The number of mass shootings can change dramatically depending on how it is defined.

Look what happens, for example, if we count an incident in which at least four people are shot — when the shooter could be one of these — and regardless of whether anyone dies: We see that the U.S. has, so far this year, experienced more than one mass shooting per day, according to a Washington Post report.

Those numbers paint a picture of a violent nation, especially one of violent males. (See anthropologist Daniel Lende and columnist Arthur Chu on the critical need to keep distinct violence from mental illness.)

Americans are constantly confronted with images of gun violence.

The situation — including but not limited to mass shootings — is so out of control that gun violence is routinely invoked now as a public health hazard.

What is the psychic cost of this mayhem? How can social scientists and others even begin to measure that toll and work to ameliorate it?

In Virginia, where I live, the 32 shooting deaths at Virginia Tech in 2007 are never far from memory. Last week's on-camera killing of two journalists near Roanoke is exceedingly raw. Nine deaths at a church two states over in Charleston, S.C., haunt the mind.

I hear, all around me now, anxiety about America's gun culture — from adults of all ages, from teenagers, from children. Is this mere anecdotal evidence, to be dismissed?

And is the anxiety misplaced?

I think these are the wrong questions.

We do, of course, need to contextualize high-octane emotions about guns. It's true that the risk of being caught up in a mass shooting carried out by a violent stranger is quite small, as Georgetown University psychiatry professor Liza Gold emphasized on Monday's Diane Rehm Show.

While 30,000 people a year in the U.S. die from gun violence, Gold noted, two-thirds of those commit suicide. Of the remaining 10,000, a full 90 percent lose their lives in acts of violence from someone known to them.

"The number of people who are killed by strangers with guns is less than 1.5 percent a year," Gold noted on the program.

Gold's comments push us to realize that suicide-prevention and anti-domestic-violence programs are critically important in combating gun violence itself.

It's also true that the risks of dying or being injured by gunfire, generally, whether or not in a mass shooting, impacts some Americans far more than others. These risks fall disproportionately upon people of color.

The embodied cost of this situation is described in Ta-Nehisi Coates's Between the World and Me, a book published in July in the form of a letter from the writer to his 15-year-old son, Samori. Coates asks Samori to understand the "visceral experience" of racism, the cost borne by the bodies of those most at risk.

Then he writes about what happens when white people (or, borrowing from James Baldwin, people who Coates says "think they are white") come to experience the terrible sense of vulnerability that routinely stalks people of color:

"When their own vulnerability becomes real — when the police decide that tactics intended for the ghetto should enjoy wider usage, when their armed society shoots down their children [emphasis mine], when nature sends hurricanes against their cities — they are shocked in a way that those of us who were born and bred to understand cause and effect can never be."

As a white person whose body is comparatively safe out in the world, I learned from Coates's book. My risk will never be as great as Coates's, or his son's.

I take in Coates's message of racism. I hope it doesn't diminish that message to ask this question alongside (not in place of) Coates's narrative: How many of us, that is, how many of all of us in this country, have at this point experienced no psychic toll from gun violence, including mass shootings? How many of us have felt no anguish because of a loved one's experience — ranging from injury or death to threat and terror — because people may so readily acquire guns and kill with them?

Even from the vantage point of my privileged world — I live in a quiet town, teach on a quiet campus, write in a quiet house — I can reel off examples of people close to me (in Virginia and in other states) who have suffered in one or more of these ways.

How may we help Americans with gun-related anxiety and gun-related PTSD? It's critically important to take steps to prevent more violence.

But what about those people already suffering?

I ask again: Is any one of us left unaffected by gun violence?