Accessibility links
Moving From Creation Of The Cosmos To Human Life : 13.7: Cosmos And Culture What makes up your body are the remains of stars long gone. That this star stuff got organized to the point of becoming animated, thinking matter is nothing short of wonderful, says Marcelo Gleiser.

Moving From Creation Of The Cosmos To Human Life

Moving From Creation Of The Cosmos To Human Life 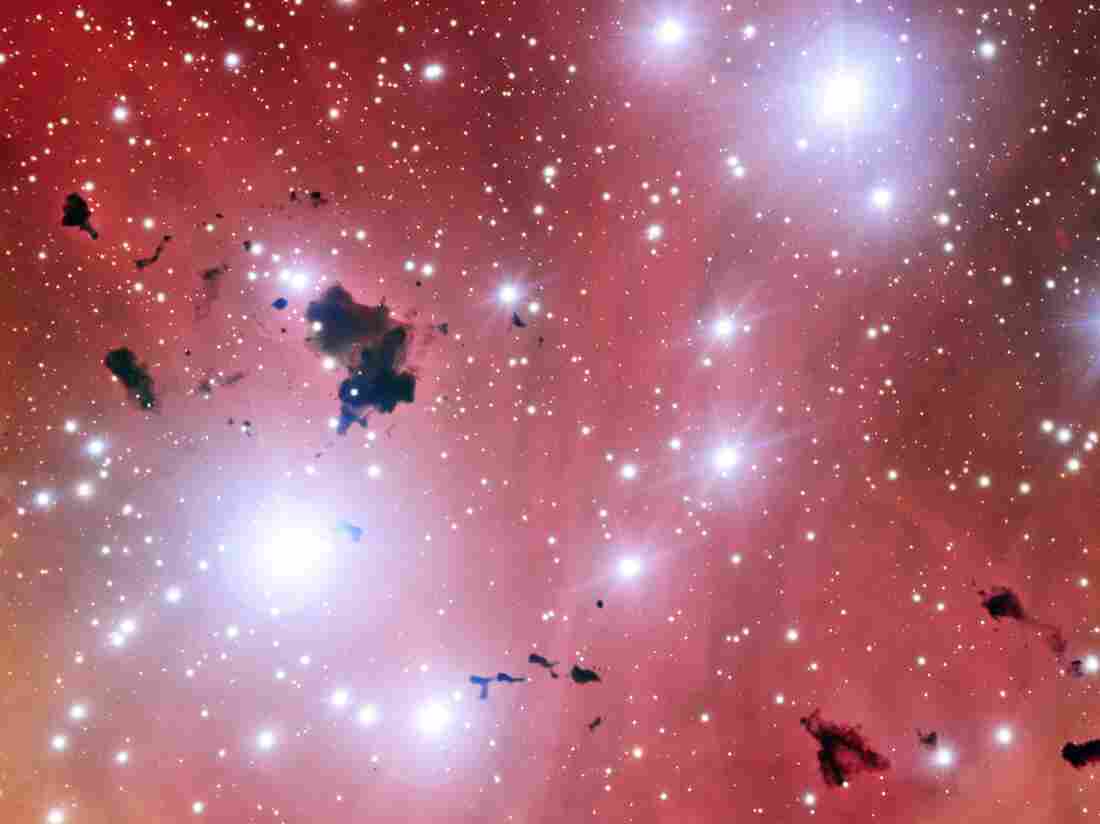 A stellar nursery consisting of a group of thick clouds of dust, known as the Thackeray globules, silhouetted against the pale pink glowing gas of the nebula, as captured by the European Southern Observatory's Very Large Telescope. ESO hide caption 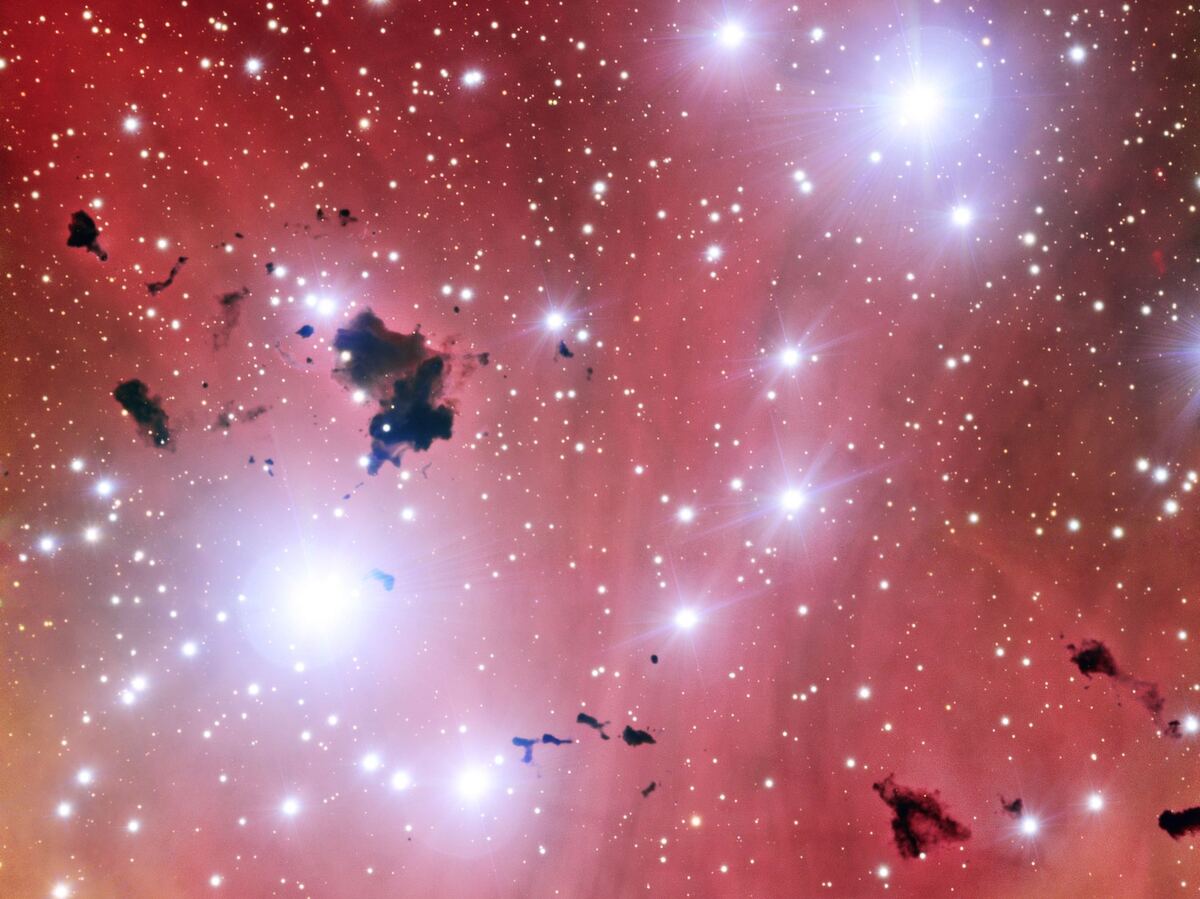 A stellar nursery consisting of a group of thick clouds of dust, known as the Thackeray globules, silhouetted against the pale pink glowing gas of the nebula, as captured by the European Southern Observatory's Very Large Telescope.

Few questions of our time are more perplexing than the transition from non-living to living matter.

How did a sample of inorganic chemicals self-organize to become a living creature, capable of absorbing energy from the environment and reproducing? Although the question remains open, there are a few things that we can say based on present-day knowledge.

We know that life has been around on this planet for at least 3.5 billion years. It could have emerged even earlier, but evidence is still controversial. For one thing, the first 500 million years of our 4.5 billion year-old planet were very dramatic — huge tides due to the moon's proximity, constant bombardments from outer space, massive volcanic activity, a nasty atmosphere. Things only quieted down around 3.9 billion years ago.

Somehow, the right chemicals combined to create a living creature, ancestor to all living creatures that followed. Where did life emerge first? How did it emerge? Did it emerge only here, or is it all over the universe?

A few years ago, I presented a lecture at an astrobiology conference where I explored the connections between the universe and life, including intelligent life. The lecture, titled From Cosmos to Intelligent Life: The Four Ages of Astrobiology, was aimed at a young audience of scientists from different areas. The main theme, one that resonates with other 13.7 entries, is the notion of interconnectedness: Each age relates to all other ages, and a reasonable picture only emerges as we take them together. This is quite exciting for astrobiology, a field that brings in expertise from many different scientific lines of inquiry.

In short, the four ages are: the physical, the chemical, the biological and the cognitive. Although they can be arranged chronologically from the Big Bang onwards, they are still ongoing; they don't end, their boundaries being somewhat fluid. The physical age goes from the Big Bang to the formation of the first stars, when the universe was around 200 million years, or so, old. Before this first time, there were no chemical elements to speak of, only the lightest ones, forged in the first minutes of cosmic expansion: hydrogen, helium, lithium and some of their isotopes.

As the first stars formed, they lived their short lives to generate heavier chemicals and new stars, in a cycle of creation and destruction that still goes on today. These stellar life cycles create the elements of the Periodic Table. The stuff you have in your body — the calcium in your bones, the iron in your blood — are the remains of stars long gone. That this star stuff got organized to the point of becoming animated, thinking matter is nothing short of wonderful.

The chemical age starts when these heavier elements are forged and spread across the cosmos, eventually becoming part of nascent stellar systems, stars circled by planets and their moons. Eventually, in at least one small planet, such chemicals organized to form a living creature and then some. The biological age gets started here and, potentially, even before this in other spots across this galaxy and, of course, across other galaxies in the cosmos. For one thing unites all of these processes, the fact that the laws of physics and chemistry are the same all over. This makes it plausible, but not necessary, for life to be a repetitive phenomenon across space.

The biological age, the age of life in the cosmos, is where NASA focuses much of its efforts for finding life elsewhere. From the story of life here, we know that it was very simple for most of the 3.5 billion years that it existed: one-celled organisms dominated for almost 3 billion years. According to the theory of evolution, there is no directive for life to become complex with time. It can, but it could just be bacteria all the way. Complex organisms may form as they did here, but they require a set of unusual conditions, from planetary stability (orbital, weather, etc.) to proper atmospheric composition — not so easy to find around.

That life here evolved to generate a species with cognitive awareness is almost surprising. But, hey, here we are! The cognitive age may have started elsewhere in the galaxy or in other galaxies, but in our planet it is quite recent — only a few hundred thousand years old. Maybe because I've been re-watching Star Wars with my kids recently, it's hard to imagine that we are it when it comes to life and, more to the point, intelligent life. On the other hand, as one starts to look at all the necessary steps to go from non-life to cognition, it's also hard to imagine that intelligent life is widespread.

In any case, the four ages are all interrelated — and if we worked here, who knows what's out there? We can only find out if we look.