Accessibility links
Should A Monkey Own A Copyright? : 13.7: Cosmos And Culture This week, a lawsuit was filed for copyright ownership for a wild macaque named Naruto, who took the now-famous "monkey selfie." Anthropologist Barbara J. King explores what the outcome could mean. 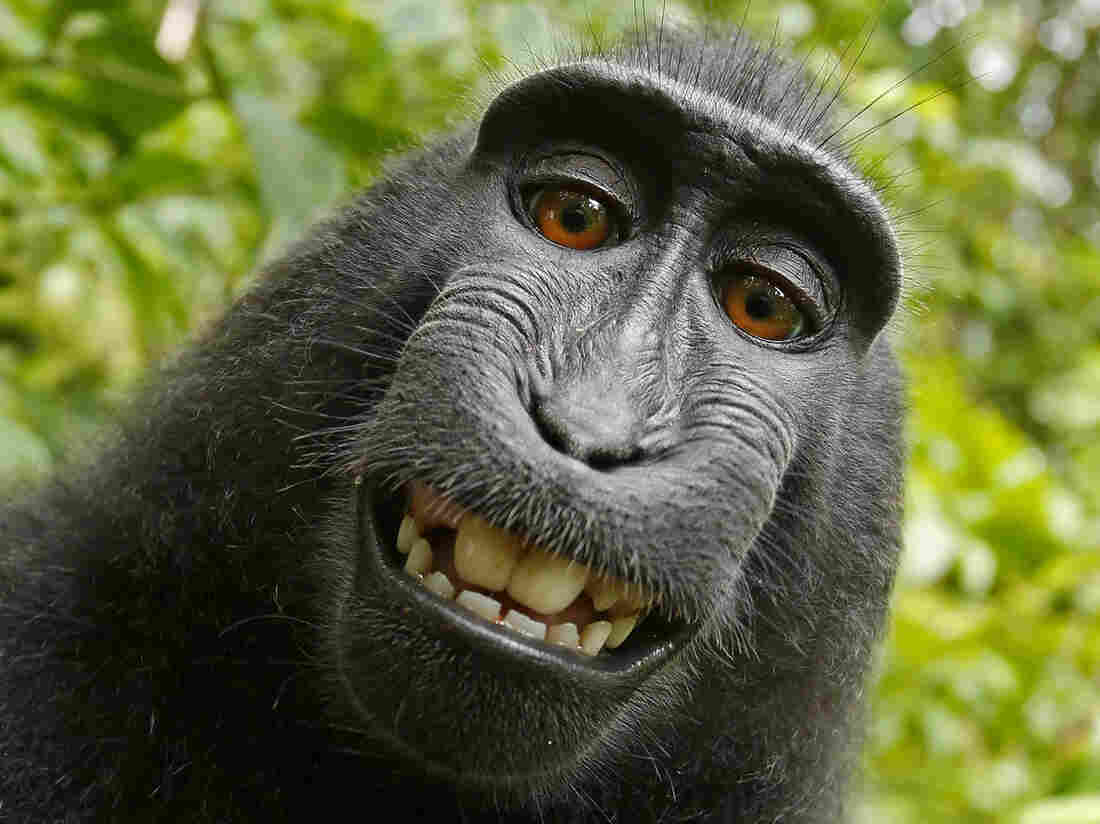 A selfie taken by a macaque monkey on the Indonesian island of Sulawesi in 2011 with a camera that was positioned by British nature photographer David Slater. AP hide caption 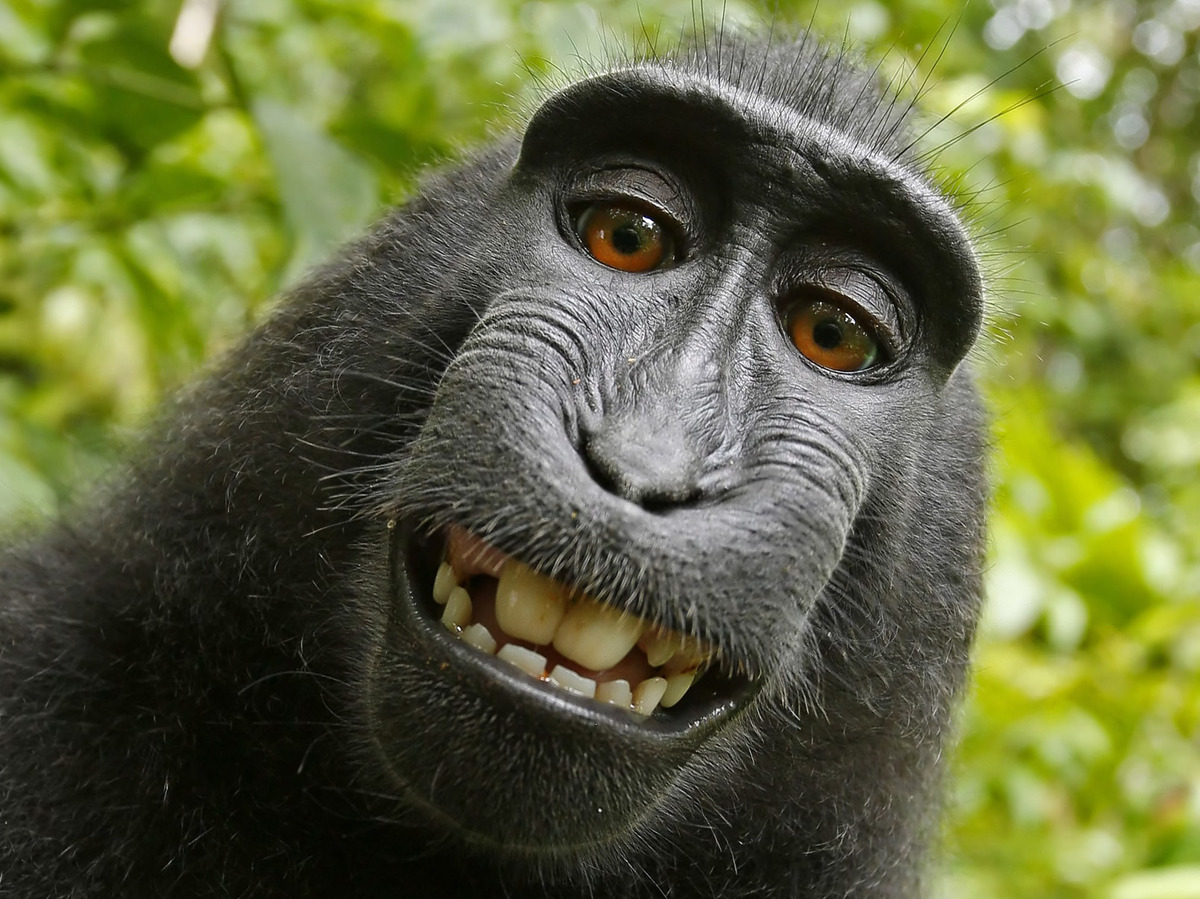 A selfie taken by a macaque monkey on the Indonesian island of Sulawesi in 2011 with a camera that was positioned by British nature photographer David Slater.

A six-year-old crested black macaque monkey named Naruto, who lives in the Tangkoko Nature Reserve on the island of Sulawesi, Indonesia, is at the center of a provocative lawsuit filed on Monday by the animal rights organization PETA.

Naruto's face is known the world over because, in 2011, he used a camera left unattended on the ground by photographer David Slater to take his own picture — the viral "monkey selfie." (Note: Originally the media referred to Naruto as female, but he's male.)

In fact, Naruto took a succession of photographs that day — and the central claim of PETA's lawsuit is that the copyright should belong to Naruto not to the Slater. The document filed by PETA on behalf of Naruto includes this language:

"Naruto authored the Monkey Selfies by his independent, autonomous actions in examining and manipulating Slater's unattended camera and purposely pushing the shutter release multiple times, understanding the cause-and-effect relationship between pressing the shutter release, the noise of the shutter, and the change to his reflection in the camera lens."

PETA General Counsel Jeff Kerr told me in an email Tuesday that when we are dealing with intelligent and intentional animals, like these macaques, species membership should not be the deciding factor in copyright law.

"The law recognizes that anybody who takes a photo like the one Naruto took owns the copyright. If a human took this photo there would be no question that the photographer owns it. That shouldn't change just because Naruto is a macaque. He is entitled to the benefits of the art he created."

The lawsuit itself includes this passage:

"While the claim of authorship by species other than homo sapiens may be novel, 'authorship' under the Copyright Act, 17 U.S.C. § 101 et seq., is sufficiently broad so as to permit the protections of the law to extend to any original work, including those created by Naruto."

I find the argument advanced by Kerr, and by the lawsuit generally, to be persuasive, for two central reasons.

That the photographs Naruto took resulted from a thoughtful, intentional series of actions fits perfectly well with what we anthropologists know of monkey intelligence. Macaques — all species of macaques, including Naruto's — sort out complex kin and dominance-rank relationships in their groups and take part in what primate scientists call political maneuvering. They learn from each other and pay close attention to what goes on in both their social and their physical environments. Our knowledge about monkeys leaves no question that they act with purpose and intention every single day.

Indeed, primatologist Antje Engelhardt of Georg-August University in Göttingen, Germany, who has observed Naruto's group in Sulawesi for years, is named along with PETA as Naruto's "next friend" in the lawsuit — meaning that she joins with PETA in suing for copyright on Naruto's behalf.

Just as importantly, PETA seeks to divert the profits of the photographs, including those published in a book, from Slater to Naruto and the other macaques in the nature reserve. These monkeys are listed as "critically endangered": Their numbers are decreasing rapidly because of bushmeat hunting and encroachment by people in the areas immediately around the reserve.

Slater, the photographer whose camera Naruto used, told the Washington Post this week that the filing of this lawsuit is a "stunt" by PETA. "I authored the set up you see," he noted.

As the same Post article notes, however, back in 2011 Slater wrote that Naruto had conducted "its own photo shoot" and that "the shutter was pressed by the monkey."

The Post ends its report with this sentence: "Naruto was unavailable for comment." That's a cute line. But, of course, the fact that Naruto cannot verbalize his response to a journalist or describe his actions in words is beside the point in this context. He's a highly intelligent primate who acted with purpose.

The lawsuit may be a long shot, but it's a worthy one. If PETA should win on behalf of Naruto, exciting results would follow. Practically, the conservation of these endangered macaques would be furthered by the financial gain. And in the world of animal ethics, the outcome would be significant. A sentient and smart non-human would be understood legally not as property but, for the first time, as the owner of a work that he himself had created.