Accessibility links
Maybe It's Time To Stop Snickering About Aliens : 13.7: Cosmos And Culture This may be the moment for all of us sober, rational, boring scientists to stop with our quick dismissals, as beyond them hides a much more interesting reality, says astrophysicist Adam Frank. 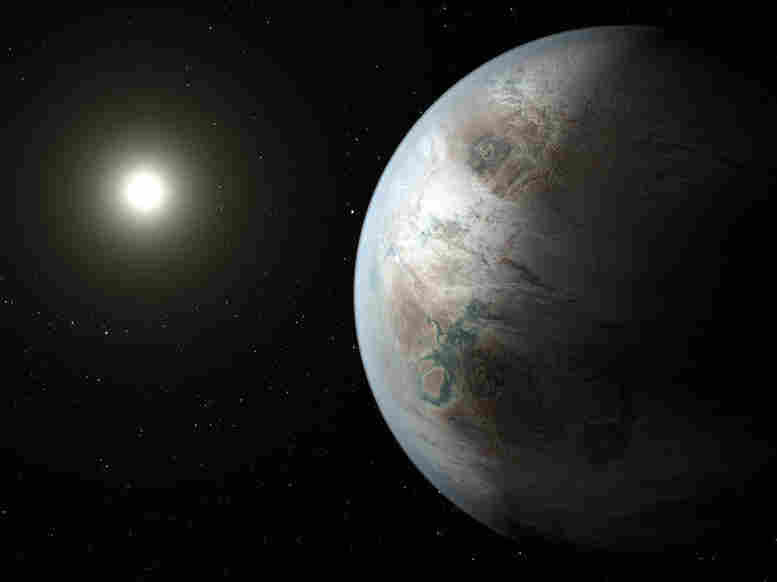 An artist's concept depicts one possible appearance of the planet Kepler-452b, the first near-Earth-size world to be found in the habitable zone of a star that is similar to our sun. NASA Ames/JPL-Caltech/T. Pyle hide caption 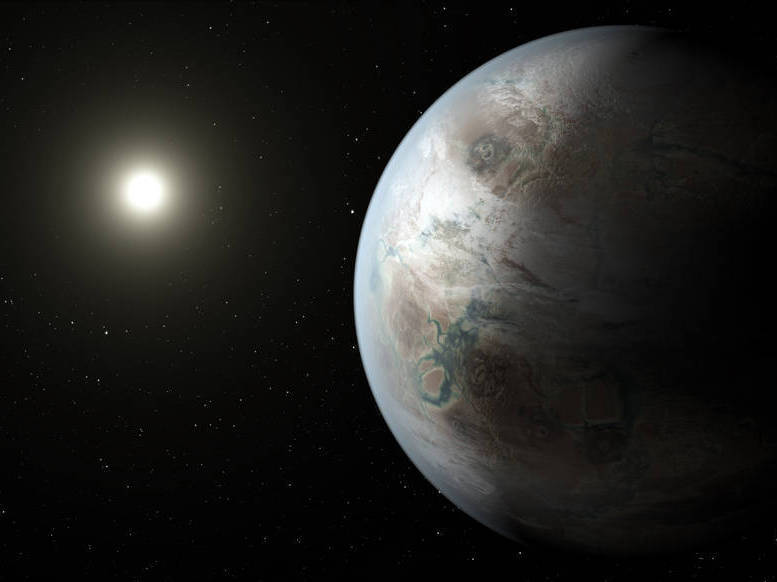 An artist's concept depicts one possible appearance of the planet Kepler-452b, the first near-Earth-size world to be found in the habitable zone of a star that is similar to our sun.

Have you heard the big news? If not, you haven't been paying attention to your Facebook feed.

For the past week or two, the Internet has been lighting up about alien megastructures that might, or might not, be orbiting a star called KIC 8462852.

So what should we make of it? Is it just hype deserving a long, slow roll of the eyes? Or is there something in the story that deserves serious consideration?

The answer to this question is, I think, surprising — especially given the next sentence I'm about to hit you with.

It's probably not aliens. Sorry.

But beyond our quick dismissals and snickers there hides a much more interesting reality. Maybe it's time for all of us sober, rational, boring scientists to stop snickering when these kinds of possibilities pop up.

Before we go any further, though, let's quickly review a few facts.

Last week's news was about the star KIC 8462852. The focus was on changes in the star's light output (its light curve) that had never been seen before. The observations were taken by the Kepler space telescope, whose job is discovering exoplanets by looking for partial eclipses, or transits, that occur as the planet passes in front of its host star. Kepler scientists know exactly what the drop in starlight should look like when they've discovered a planet.

But the light curve of KIC 8462852 looks nothing like a planet — or any other known astronomical phenomena.

"We'd never seen anything like this," Tabetha Boyajian, one of the authors on the discovery paper, told Ross Andersen at The Atlantic (see Andersen's post for details on the whole story). "It was really weird," Boyajain continued. "We thought it might be bad data or movement on the spacecraft, but everything checked out."

Boyajian and her co-authors considered a wide range of possibilities to explain the strange dips in the light coming from KIC 8462852. Nothing they dreamed up provided a really, really good explanation. And in the absence of that really, really good explanation, at least a few others have been thinking: "Aliens!" As Andersen reports, Jason Wright of Penn State is already working on a paper suggesting we might be seeing a signature of extraterrestrial construction, a "swarm of mega-structures," on a planetary system scale.

Now, at this point, I could start telling you about Dyson spheres and Kardashev Type II civilizations that engage in solar-system-spanning building projects (or even Vogon Constructor Fleets).

That's because the point today is not what KIC 8462852, in particular, might be telling us. The odds are high that a natural explanation will be found for the star's flickering that has nothing to do with aliens.

Why take that stance? Well, aliens are always the last hypothesis you should consider. Occam's razor tells scientists to always go for the simplest explanation for a new phenomenon. But even as we keep Mr. Occam's razor in mind, there is something fundamentally new happening right now that all of us, including scientists, must begin considering.

Kepler and the many exoplanet-hunting missions coming next (JWST, PLATO, etc.) represent an entirely new way of watching the sky.

Telescope time has always been expensive — and there's a lot of sky. In the past, astronomers didn't have the technical capacity to continuously watch zillions of stars for long periods of time. The suns we astronomers did come back to again and again tended to be remarkable in one way or another (they flared or blew up periodically). But the exoplanet revolution means we're developing capacities to stare deep into the light produced by hundreds of thousands of boring, ordinary stars. And these are exactly the kind of stars where life might form on orbiting planets.

In fact, the express purpose of many of these missions is to find these planets and probe their light signatures so deeply we might "see" their atmospheres. In that way, we might also search for so-called bio-signatures. These are atmospheric molecules like oxygen and methane that will be present only if a biosphere has developed on the planet.

So we are already going to be looking at a lot of stars to hunt for planets. And when we find those planets, we are going to look at them for basic signs that life has formed. But all that effort means we will also be looking in exactly the right places to stumble on evidence of not just life but intelligent, technology-deploying life. It's as if your job was to look through lost-and-found wallets all day gathering dollar bills. Since you're already looking in the wallets, there is some chance you might stumble on a winning lottery ticket in one of them, too.

Of course, the odds of finding a winning lottery ticket are low. In the same way, seeing something unusual around a star is probably not evidence of an alien civilization. But given the large-scale exoplanet observations we are doing anyway, perhaps it's time to start thinking about how to think about the whole alien thing. David Grinspoon, the Library of Congress Chair in Astrobiology, put it succinctly when he told me:

"Lots of astronomers have been discussing all the possibilities for the light curve pretty responsibly. But some are really up in arms at even the mention of aliens. I think that's a mistake. Clearly, some things are more probable than others. But we have to learn how to handle these things [and] how to not to handle them."

I think Grinspoon is right. If we do lots of exoplanet observations, then we are bound to see new things. For most of them, we will find "natural" explanations. But for some of them we may also need to, at least, consider the possibility of something more than natural.

And that would mean going beyond snickering.