Accessibility links
Childhood's End: The Planetary Meaning Of Climate Change : 13.7: Cosmos And Culture Some of the five mass extinctions Earth experienced in the past were driven by climate changes. Future Earth will be just fine. It's us humans we need to worry about, says astrophysicist Adam Frank. 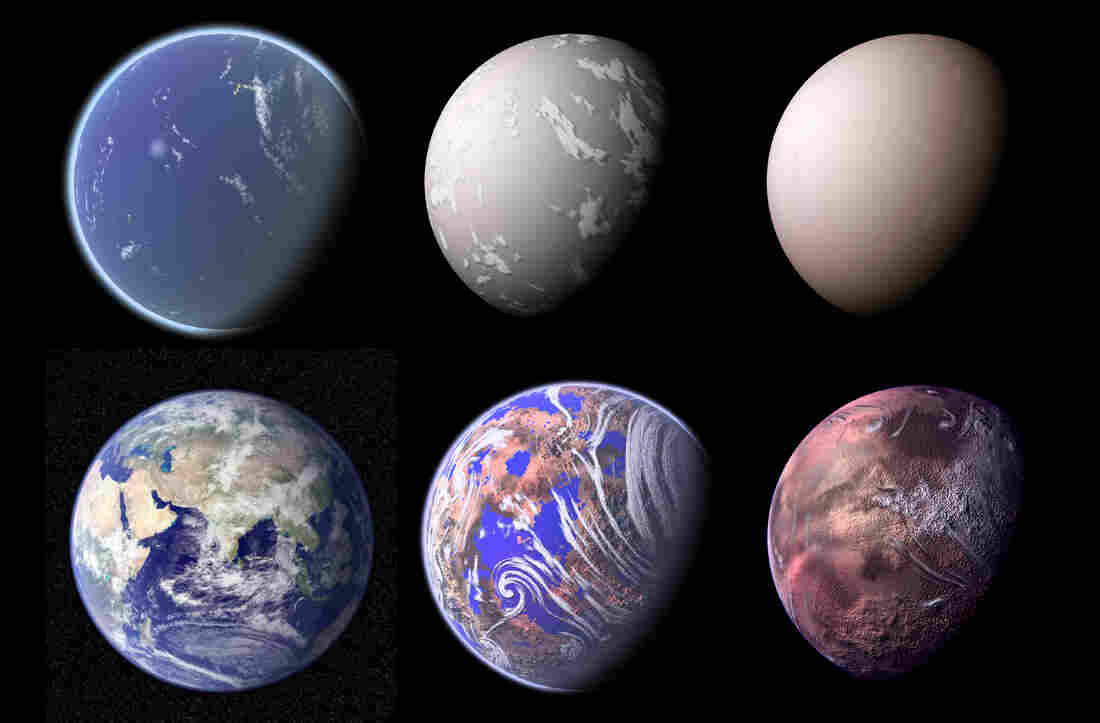 Earth has been many different planets in its long history — and could be more. Some imaginary views are shown here. Top (from left): a water world before large-scale continents had formed; a "snowball" Earth phase with extreme glaciation; and a world shrouded in smoke after a large asteroid impact. Bottom: Earth today; Earth losing its oceans as the sun becomes hotter; and a final scorched Earth. Courtesy of Don Brownlee, University of Washington hide caption 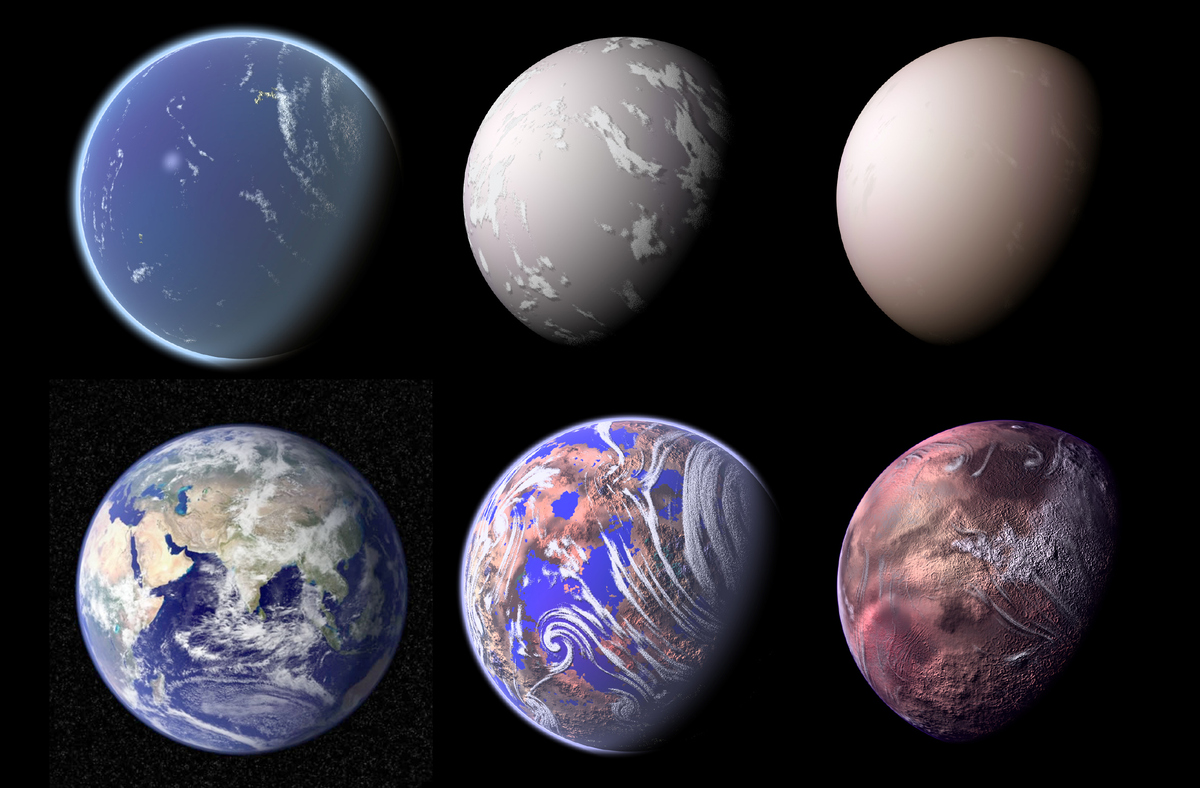 Earth has been many different planets in its long history — and could be more. Some imaginary views are shown here. Top (from left): a water world before large-scale continents had formed; a "snowball" Earth phase with extreme glaciation; and a world shrouded in smoke after a large asteroid impact. Bottom: Earth today; Earth losing its oceans as the sun becomes hotter; and a final scorched Earth.

The Paris climate meeting is now heading into its home stretch, as world leaders debate what to make of a human future on a changing planet.

As an astronomer, however, I'm used to taking the long view on things. From that perspective, a startlingly different understanding of climate change appears from what I often see people talking about. From the long view — which for climate is the only view that makes sense — it's clear we're looking at climate all wrong.

Ask folks about climate change, and a lot of them will talk about the climate debate. They'll tell you Democrats and Republicans, liberals and conservatives, environmentalists and business interests. And even for those who follow the science and understand the problem, the discussion often turns around the idea of saving the Earth. We share pictures of polar bears and shrinking ice flows with each other on Facebook and feel doomed.

All of these perspectives, however, miss an essential point. The long view is all about understanding planets, life and their coupled evolution. From that vantage point, what we're going through now is not a political debate or an attempt to save the planet. Instead we're at the beginning of a fundamental planetary transition, and it's nothing short of humanity's coming of age.

This is something we can't afford to get wrong.

Now, before you think I'm just being grandiose, let me ask you a small question. What would it have been like if you had landed on Earth 3 billion years ago? To be specific, what would you have experienced as you stepped onto a shoreline where mats of early bacterial life were happily basking in the sunshine? The answer is simple.

'The Great Oxygenation' Of Earth's Atmosphere

Human-driven climate change is not the first time life has altered the planet's atmosphere. The early Earth's blanket of gases had a tiny fraction of the oxygen content of the air we breathe today. The rise of an oxygen-rich atmosphere is called the Great Oxygenation Event (GOE) and was driven by activity of life billions of years ago. This plot was made by drawing on a number of sources, including a paper by Dr. H. Holland of Harvard.

Right here, on your own planet, you'd immediately asphyxiate. Why? Because 3 billion years ago there was very little oxygen in Earth's atmosphere. The oxygen you're breathing right now is nothing more than a byproduct of this early microbial life. Let that sink in for a moment. Life changed the atmospheric composition of the entire planet.

Sound familiar? That's exactly what we are doing now.

But that's not all. The consequences of this "Great Oxygenation" were long-lasting. An oxygen-rich atmosphere changed everything for the future history of the biosphere. Building oxygen into new biochemical pathways allowed evolution to create ever-richer and more complex organisms, including big-brained critters like us.

So the generation of an oxygen-rich atmosphere was a fundamental transition in the history of the planet — and it was driven by the activity of life. This means life and planets can evolve together. It is a game-changing realization and one with huge implications for what we're missing about the crisis we're facing today.

The Earth has been many planets in the past. It was a water planet before the continents grew. It was a snowball planet when glaciers covered almost all of its surface. It's been a jungle planet so hot that crocodiles lived at the North Pole.

The climate change we are driving now is just one in a long string of the planet's changed climates. Some of the five mass extinctions Earth experienced in the past were even driven by those climate changes. New research hints that the asteroid that hit Earth 65 million years ago wasn't the only cause of the dinosaurs' exit. Instead, climate change was already forcing the thunder lizards off the stage when the asteroid struck.

And what happened after those mass extinctions? Life returned, and it flourished. In fact, we mammals (people and polar bears alike) wouldn't dominate the planet today if it wasn't for that climate-driven mass extinction.

So the long view tells us that Earth and life are going to be just fine. Our climate change crisis is not about saving Earth. That's not the problem.

Instead it's us. We are the problem.

If we are to build a sustainable human civilization, then we consciously become drivers of all future co-evolution between life and the planet. In other words, keeping the planet "habitable" for our kind of civilization means we'll need to become its steward. The large-scale random evolutionary experiments that Earth has been carrying out for the past 4 billion years will, for the most part, be at an end. If human civilization makes it to sustainability, then we will end up creating a very different kind of planet — a new kind of planet — not seen in this solar system before (though potentially one that has appeared elsewhere).

But we can't do this without entering into a partnership with the biosphere, because the biosphere is no helpless child. It's part of a network of immensely powerful, coupled physical systems (oceans, air, ice and land). That means we will only navigate our way across the transition to sustainability by learning to think like a planet.

We will have to learn the rules of life and planets and work with them to create a world where everyone thrives. In a very real sense, we will have to end our childhood as a sentient technological species and take responsibility in the deepest sense of that word.

It's a planetary transition to a new kind of planet — that's what the long view tells us. It's not the stuff of science fiction. It's the only choice facing us in building the long-term version of a global human civilization on a healthy planet.

That's the long view. That's how we grow up.