Accessibility links
The Search For The Oldest Life On Earth Is A Complicated One : 13.7: Cosmos And Culture To start, we can't ever be sure that what we find is the oldest life on Earth. All we can do is to keep looking for possible biomarkers in the oldest rocks around, says astrophysicist Marcelo Gleiser. 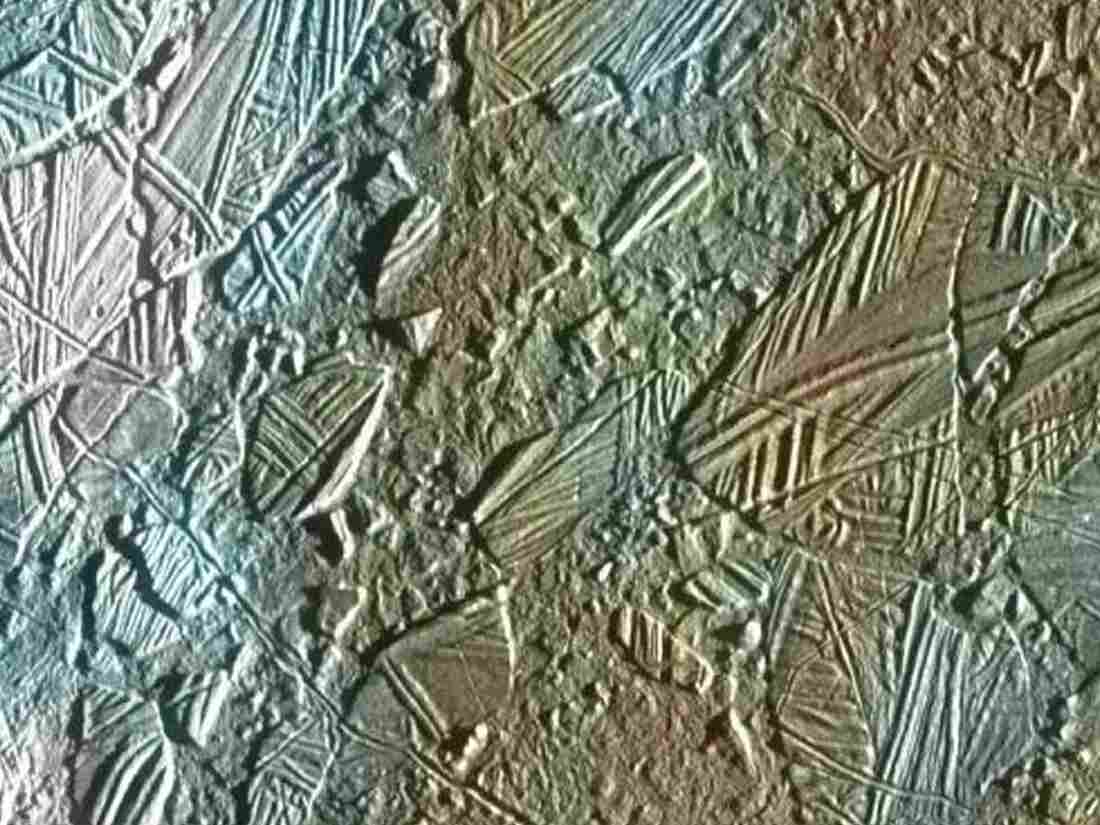 When the Galileo spacecraft swooped by Jupiter's frozen moon Europa in Nov. 1997, views of its blistered surface strengthened suspicions that a briny ocean harboring life could lie beneath an icy crust. AP hide caption 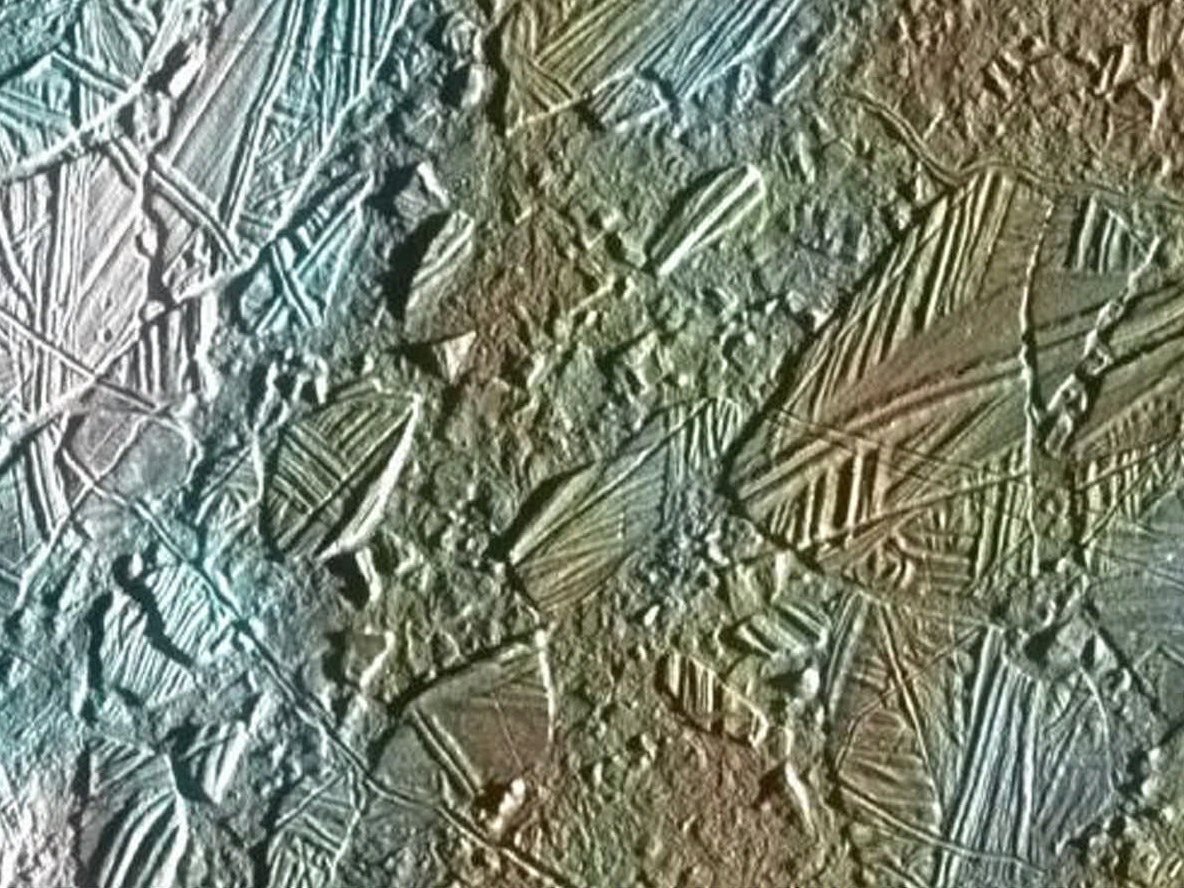 When the Galileo spacecraft swooped by Jupiter's frozen moon Europa in Nov. 1997, views of its blistered surface strengthened suspicions that a briny ocean harboring life could lie beneath an icy crust.

Being in Kaikoura, New Zealand, for what is allegedly the first astrobiology workshop here, it's a good time to go back to the basics and reflect on what we know of the complicated question of the origin of life on Earth — and the possibility of life elsewhere.

I will do this, here at 13.7, in installments during the next few weeks.

When it comes to life in the universe, we have only one undisputed sample point — Earth. For this reason, scientists trying to understand the origin of life focus on what can be reconstructed of life's early steps here as a laboratory to understand life elsewhere. This approach, of course, makes a fundamental assumption: that finding life elsewhere is easier when we follow what we know. This is a reasonable approach. Otherwise, we are out there in speculation land, without much to follow or to base our searches on. So, life is carbon-based and water-dependent.

Each involves disputes between different groups, but the "how" question is surely the toughest: How does a mix of nonliving chemicals become living? Clearly, to get to an answer the term "living" needs to be defined, at least operationally. This is already a complex problem, as no accepted universal definition of life exists. In fact, some argue that defining life may be a mistake, given that a definition is a limitation, bracketing the possibilities that life may surprise us in ways we can't even conceive at the moment. Wittgenstein argued similarly for "game." It's easier to understand what a game is than to define it absolutely. We tend to understand what a game is by comparison with games we know.

All three questions are, of course, related, and it may be naïve to treat them separately. However, from a scientific perspective, we may find clues for how life may have originated by finding the oldest signs of life possible. "Possible" is an essential qualification here. We can't ever be sure that what we find is the oldest life on Earth. All we can do is search for possible biomarkers in the oldest rocks around, hoping that if they aren't the oldest, they are at least close to the oldest.

We do know that for the first 600 million years or so of its existence, Earth was not a safe environment for life. Conditions were quite hellish, literally, as high temperatures and violent tides combined with ferocious volcanic activity and meteoritic bombardment to create a caldron of boiling chemicals unable to bind to form the more complicated, stable structures needed for life. Around 3.9 billion years ago, things quieted down, after what is known as the Late Heavy Bombardment. If living creatures existed before then, they were quite possibly destroyed.

Asking astrobiologists what they think is the oldest solid evidence for life is an interesting exercise. Opinions vary, especially at the fringes, that is, the claims for the oldest, record-breaking life. There aren't fossils preserved from 3.9 billion years ago. Scientists look for biotic materials, materials derived from living organisms, as they decompose and affect the rocks around them, or from the chemical reactions from their metabolism. Early life gets mineralized, and it is the chemistry from this mineralization process that gives clues for life.

One of the oldest pieces of accepted evidence for life dates from 3.25 billion-year-old hydrothermal vent deposits at Pilbara Craton in Australia. The dates there can be pushed to 3.48 billion years ago. How do scientists date such old rocks? Using well-known radioactive decay techniques based on unstable isotopes found on the site. (In other words, they look for radioactive minerals near the old life sites and date them together.) Interestingly, chemical fingerprints from the mineralization process show that those living creatures had already a complex metabolism, indicating that earlier, simpler life existed. Another old life comes from 3.3 billion-year-old microbial biofilms in hydrothermal shallow sediments found in Barbeton Greenstone Belt, South Africa. Earlier clues from Greenland rocks, dating to as early as 4.1 billion years ago, remain controversial. It would be quite amazing if life indeed existed that early.

The idea is that the earlier life emerged on Earth, the "easier" it is for it to emerge in general. That being the case, life shouldn't be hard to find in other planets or moons out there, including Europa, one of Jupiter's moons, or Enceladus, belonging to Saturn. Both have oceans of liquid water under a thick icy crust and show promising signs of hydrothermal vent activity.

Hydrothermal vents show how resilient and creative living creatures can be, using unusual chemicals such as sulfur, methane and hydrogen compounds to fuel their metabolisms. Geologically young New Zealand has modern extreme environments that are mineralizing. Scientists such as Kathy Campbell from the University of Auckland use these as laboratories for what happens in deep time, in particular studying how biological signatures are preserved. The best evidence comes from processes leading to quick solidification of the biotic material. Presumably, the same happened with the evidence found in Australia and South Africa — and possibly others not found yet.

However old first life was, we know that living creatures with sophisticated metabolisms were moving about and reproducing at least 400 million years after the Late Heavy Bombardment, a blink of an eye in geological time. If anything, this tells us that whatever that early life was, it took advantage of the primal Earth environment to blossom. And, since then, it never stopped — at least on this planet.