Accessibility links
The 'Necessity' Of Animal Research Does Not Mean It's Ethical : 13.7: Cosmos And Culture Whether you think animal research is justified or not, we should all want to expand the options for alternatives, says guest blogger and bioethicist Samual Garner. 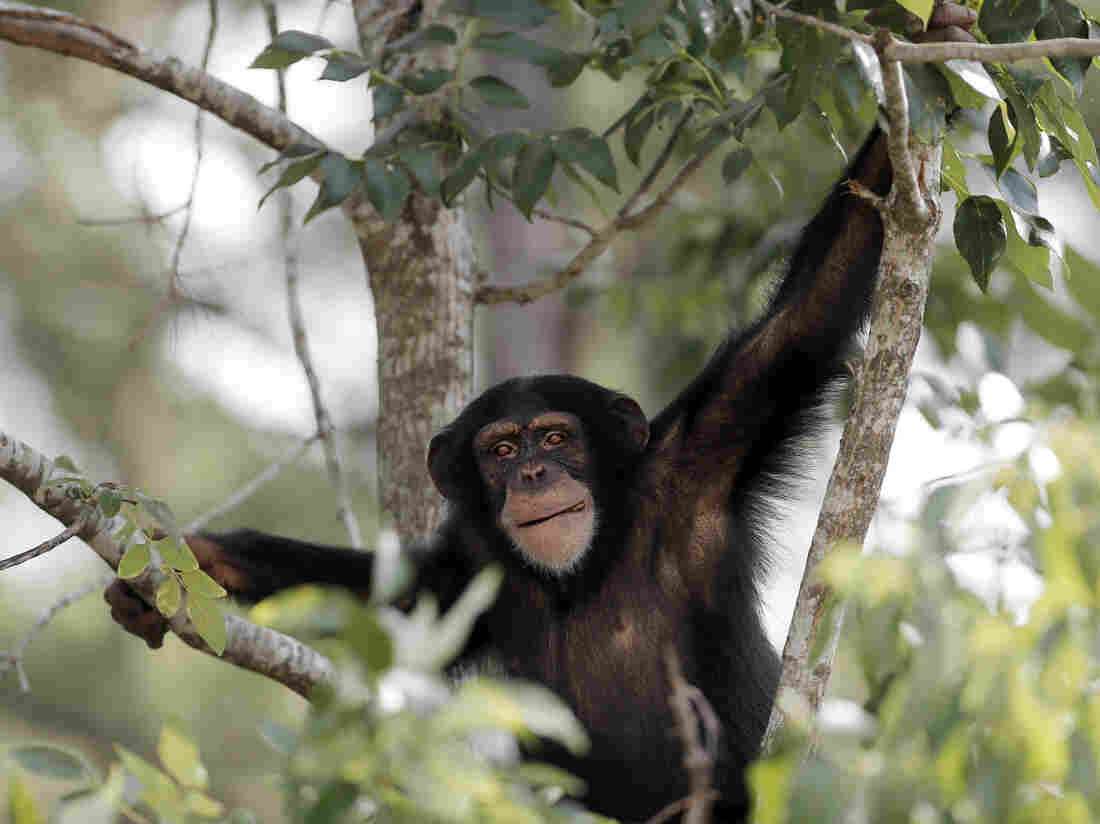 Diane, a 4-year-old chimpanzee, relaxes in the trees at the Chimp Haven sanctuary in Keithville, La., on Aug. 25, 2014. She is one of many chimps who have been moved here from the New Iberia Research Center in Lafayette, La. Brandon Wade/AP hide caption 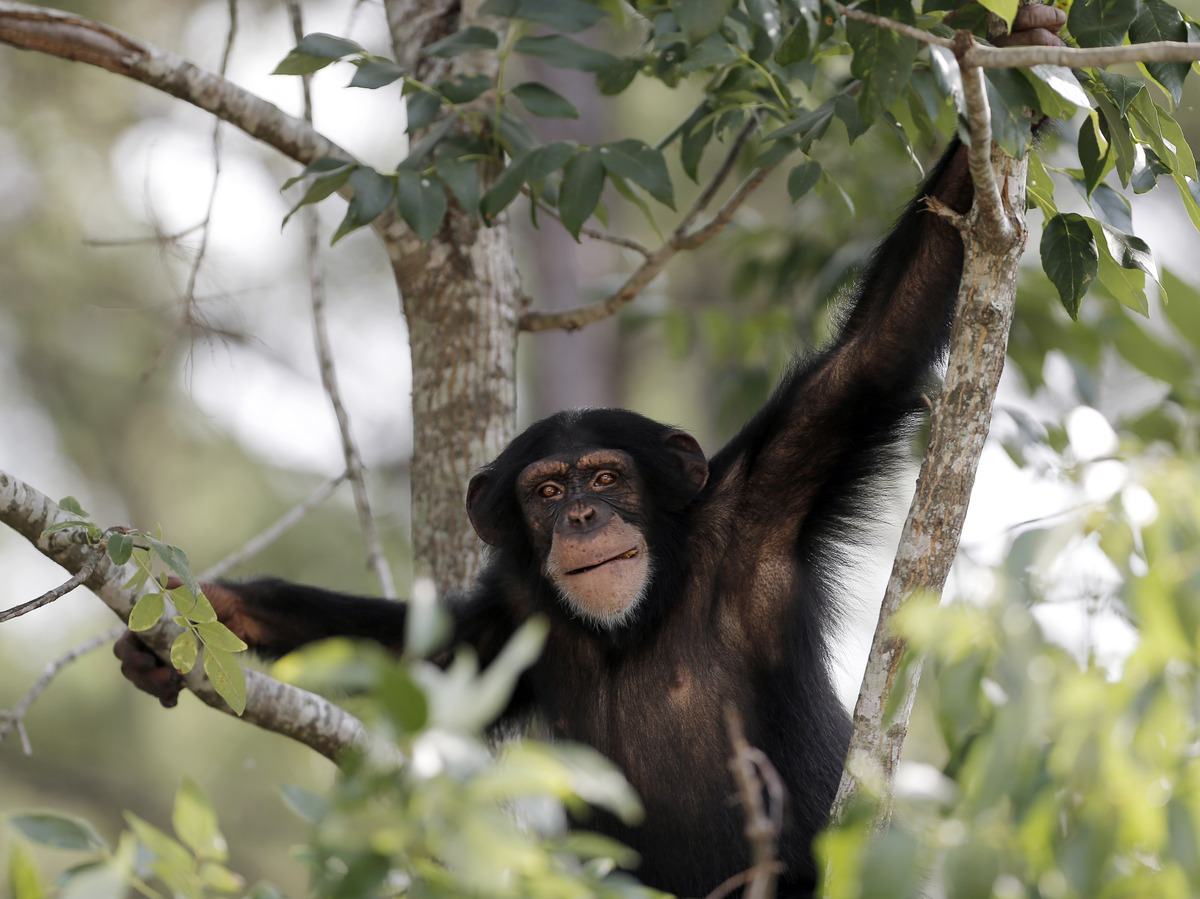 Diane, a 4-year-old chimpanzee, relaxes in the trees at the Chimp Haven sanctuary in Keithville, La., on Aug. 25, 2014. She is one of many chimps who have been moved here from the New Iberia Research Center in Lafayette, La.

A few weeks ago, two prominent scientists, Hollis Cline and Mar Sanchez, wrote a brief piece in The Hill newspaper arguing that animal research is "necessary." They were prompted by the recent National Institutes of Health (NIH) decision to phase out the use of primates in controversial maternal deprivation studies.

Scientists have long been fond of claims of necessity — in fact, justifications for animal research have remained largely the same since the writings of 19th century French physiologist Claude Bernard. However, this claim is problematic for a number of reasons.

If animal research is necessary, then it is not necessary in the sense that we have to do it. Rather, it is a choice that we make, a choice that its proponents believe is a necessary means to the end of further medical advances. Such advances are undoubtedly of significant moral importance, but even if we grant the assumption that animals are necessary for medical progress, this does not equate to a moral justification.

Research with humans is necessary to medical progress, but we have set strict limits on the extent to which humans can be exposed to risk and harm in research, even though doing so has undoubtedly slowed the rate of medical progress that might otherwise be achievable. Cline and Sanchez claim that animals in research are treated "humanely and with dignity," but the reality is that the level of protection afforded to research animals is far, far less than that afforded to human participants in research. Most animals involved in research are killed at the termination of the experiment, are kept in conditions not conducive to their welfare, and are otherwise harmed in myriad and significant ways, for example through the infliction of physical injuries, infectious diseases, cancers, or psychological distress.

While nonhuman animals cannot provide consent to research participation, we have reasoned in the case of humans that an inability to consent entitles an individual to greater protection and not lesser protection. What justifies our differential treatment of humans and nonhuman animals in research? For present purposes, it isn't necessary to rehearse every possible argument for and against animal research. It is sufficient to note that very few contemporary ethicists defend the status quo of animal research and, furthermore, that the burden of proof has now shifted to those who would defend invasive animal research.

Given the state of philosophical scholarship, meeting this burden of proof will not be easy or straightforward. Perhaps the most remarkable aspect of the scientific community's frequent claims of the necessity of animal research is how thoroughly they miss the moral point. For the most part, ethical criticisms of animal research aren't even addressed — as they aren't in Cline and Sanchez's piece — and when they are, they're usually dismissed with bad arguments, like this one, that have been refuted for decades.

Further, the claim that "animal research is necessary to medical progress" assumes a strong causal connection between the two, but what data we have available cast doubt upon the robustness of this connection. Despite strong claims about the historical benefits of animal research from the scientific community, the accuracy of animal models in predicting human responses has not been evaluated sufficiently, and the lack of certain kinds of data make this evaluation especially challenging. Based on existing data, however, numerous reviews have suggested that the accuracy of animal research in predicting human health outcomes appears to be far less than what we once assumed.

Animal studies also frequently appear to be poorly designed. The predictive value of animal research might increase if study design improved, but this isn't certain. Even NIH Director Francis Collins recognized these concerns in a forward-thinking 2011 commentary, stating that, "The use of animal models for therapeutic development and target validation...may not accurately predict efficacy in humans." Given these issues, systematic reviews should become routine and strong statements about the utility of animal models should be tempered. This does not mean that animal research has never produced any or even many important medical benefits, but these claims require empirical validation, not simply repeated assertion.

It also means that scientists and science agencies should be much more aggressive about seeking and funding alternatives to animals in research. Support has certainly grown, but investment of money and human labor into non-animal alternatives has been paltry. Even with this limited investment, some impressive advances are being made — witness the ongoing development of "organs on a chip" — but much more needs to be done, with more money behind it, and with more of a sense of haste.

Beyond funding, the scientific community simply needs to adopt a better attitude toward innovation in alternatives, or else their limitations will continue to be a self-fulfilling prophecy. This is science — a discipline with a remarkable history of achievement and innovation despite significant technical challenges. Where are the editorials galvanizing the scientific community to continue to innovate without animals? Where is the Human Genome Project-type investment in alternatives? To say that animal models are "necessary" when alternatives are not aggressively pursued seems a bit dishonest. And given the amount of harm caused to animals in research—whether you think it's justified or not—we should all want the alternatives field to grow.

Literally thousands of books and peer-reviewed papers have been written on the extent of our moral obligations to animals. As a field that is dedicated to rigorous inquiry and rational thought, the scientific community should take seriously the vast philosophy literature on these topics — the same field that gave rise to the conceptual foundations of science — rather than assertions and rhetoric. When it comes to animals and ethics, there have been very few serious attempts to engage the intellectual issues. Scientists can and should do better.

Samual Garner is a bioethicist living in Washington, DC. He is an associate fellow at the Oxford Centre for Animal Ethics and writes on human research ethics and animal ethics.