Accessibility links
Was Einstein Wrong? : 13.7: Cosmos And Culture Philosopher Henri Bergson didn't challenge Einstein's theory but, instead, a philosophy that grew up around it; Bergson's separation of science and metaphysics is worth considering, says Adam Frank. 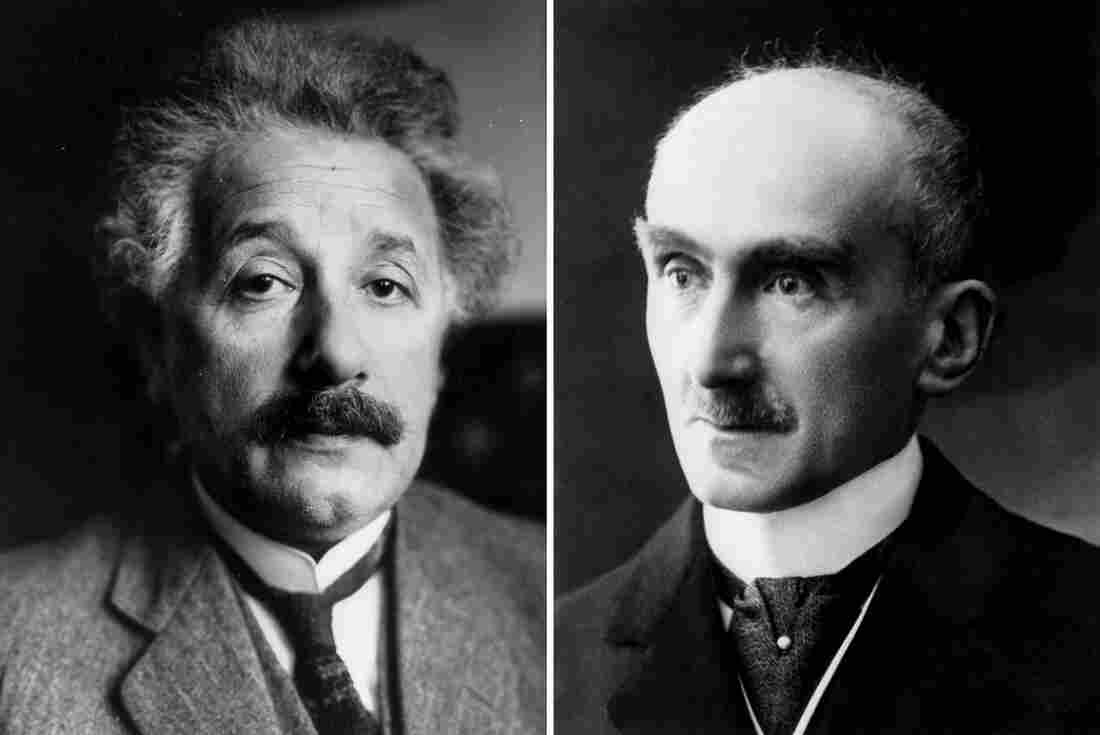 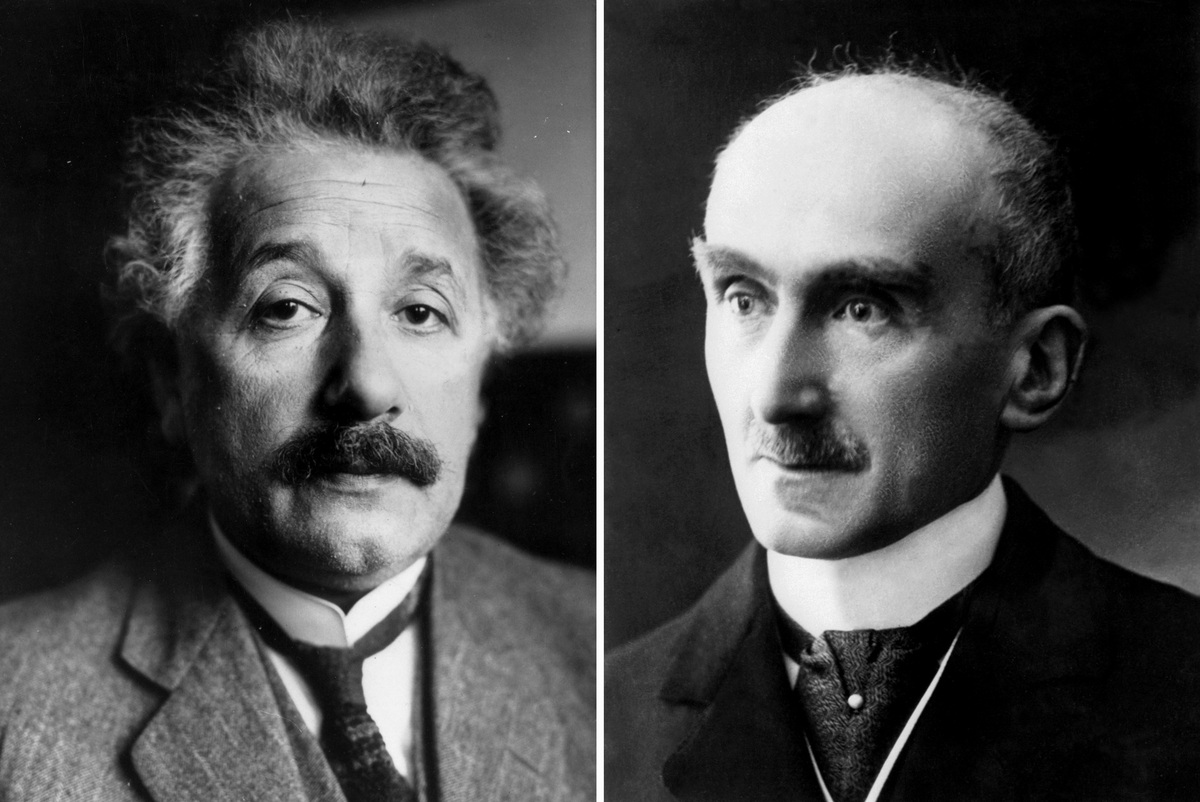 Last week's announcement of the direct detection of gravitational waves proved, once again, the enduring power of Albert Einstein's scientific vision. Once again, Einstein was right in that this theory accurately predicted the behavior of the world.

But with last week's triumph, a deep and fascinating question arises: Could Einstein be right about his science and still be wrong about the broader context into which we humans put that science?

There are a lot of reasons thinking about physics is worth the effort. From GPS to 3-D printers, it's a subject yielding a lot of cool technology. And from flushing toilets to rising clouds, physics also explains a lot about the world around us.

But there's another reason people love physics — the world we can't see. Physics offers radical new perspectives on what lies beneath, behind and below our everyday experience. In this way, physics seems like more than just knowledge; it seems like truth with a capital T.

But when science reaches the hairy edges of our experience, when it reaches outward to the boundaries of our abilities to describe the world, is there something else coming along for the ride? Together with the powerful, abstract mathematics and the ingenious instrumentation, is there something beyond "just the facts" requiring special attention when physicists make their grandest claims about the cosmos?

To be exact, is there a philosophy — a "metaphysics" — that goes beyond what the math and the data support? And, if such background metaphysics exist, could it be wrong even if the theory itself is right in terms of experiments and data?

This question is at the heart of a fascinating book I've been reading called The Physicist and the Philosopher by Jimena Canales. It's a story about Albert Einstein (who needs no introduction) and Henri Bergson (who probably does).

The French philosopher Bergson was far more famous than Einstein in the first two decades of the 20th century. The reason most folks these days know Einstein's name but not Bergson's is, for Canales, an important story in itself. It's the story of how science seemed to become the last word on everything, even on a topic as subtle, slippery and difficult to pin down as time.

It all began in 1922, when Einstein and Bergson met in an unplanned but fateful debate. Einstein had been invited to give a presentation in Paris on his theory of relativity. Time was central to Einstein's work. It was, however, also the central issue in Bergson's philosophy. Their conflicting views on the meaning of time set the scholars on collision course.

In the debate, Bergson made it clear he had no problem with the mathematical logic of Einstein's theory or the data that supported it. But for Bergson, relativity was not a theory that addressed time on its most fundamental, philosophical level. Instead, he claimed, it was theory about clocks and their behavior. Bergson called Einstein out for missing the distinction.

In Bergson's philosophy, there was something greater to time than just measurements. Time was so central to human experience that fully unpacking it meant going beyond mere accounts of clocks or of even "psychological" perceptions. Instead, time was intimately connected to the bedrock of what it means to experience the world. It was, in some sense, the essence of human being and hence of being itself. For Bergson, that meant purely scientific accounts could not exhaust time's meaning or importance.

So, on that day in Paris, Bergson was not criticizing Einstein's theory. He was attacking a philosophy that had grown up around the theory — and that was being passed off as part of the science. It was the theory's hidden metaphysics that Bergson challenged. Bergson told Einstein that the only proper way to unpack the full meaning of time, in all its lived richness, was through explicit philosophical investigations.

Einstein, however, was not moved. In response to Bergson's challenges, the physicist lobbed his now famous grenade: "The time of the philosophers does not exist," he told the audience.

So what are the metaphysics of Einstein's theory? As you might imagine, one could fill a library with all the books out there trying to answer that question, but let's look at one powerful example. In relativity, space and time are no longer separate entities. Instead, they're replaced with a four-dimensional whole called space-time. But something very weird happens when you make that move.

The remarkable thing about space-time is that it contains all the events that ever happened. It also includes all the events that ever will happen. So, in this big, 4-D space-time representation of the universe, there's Julius Caesar getting stabbed and the Mets winning the 1969 World Series. But the coffee you are going to spill on your pants at that meeting next Tuesday is there, too. So is that moment when you watch the new president get inaugurated in January 2017. In fact, everything that will ever happen to you — including your death — is strung across space-time as a linked string of already existing events. Physicists call this your world line.

So, is this really how time works? Do all events already exist in this "block universe" of Einstein's relativity? Is everything that will ever happen already trapped in the 4-D chamber of space-time?

This view is sometimes called "chrono-geo-determinism" (the geo part comes because Einstein's theory is really about the geometry of space-time). It's one example of a philosophical theory about the nature of reality that grows out of a related, and validated, scientific theory. It is literally meta-physics and it's exactly the kind of thing Bergson was arguing against.

For Bergson, and others at the time, there was a difference between the mathematical physics/data and the higher-order interpretation — the philosophy — you glued on it. It's in this way that Einstein could be right and wrong at the same time. He is clearly right about the science, but he could be wrong about the interpretation of time attached to that science.

Now, what are we to make of Bergson's claims?

I don't know enough about Bergson's explicit philosophy of time to take a stand one way or another, but I do think his separation between valid scientific theories and the metaphysics that grows around them is worth considering.

The physicist David Mermin once pointed out that we physicists have a way of turning our mathematical equations into "things" existing in the world. We take their success at describing aspects of the world (like the behavior of read-outs in an experiment) to mean the equations are fully interchangeable for real things (often unseen) existing out there independently in the real world.

But for Mermin, the equations are always abstractions. They are immensely powerful and immensely useful stories we tell about the world that capture some essential truth but not all truth.

And in spite of what one may think of Bergson's specific ideas about time as an "elan vital" driving life and evolution forward, there are other philosophical perspectives that take experience to be irreducible.

In particular, the branch of philosophy called phenomenology takes the direct apprehension of the world as its main concern. From phenomenology's perspective, scientific theorizing and investigation must come after the raw fact of our embodied experience. Martin Heidegger, a German phenomenologist, emphasized that the problem of "being" — the problem of understanding the verb "to be" — remained unsolved by science or philosophy. From this perspective, the rush to make science the adjudicator of all questions meant the question of being had been entirely forgotten.

Taken together, these perspectives point to a possibility that I find really deeply intriguing.

This blog is dedicated to science and culture. In the debate between Bergson and Einstein, there is, perhaps, a different way to approach the question about where science fits into the entire fabric of human experience. In particular, it points to what might be a new way of understanding that fabric. In this discussion, we might begin to see a new relationship between our immense capacities for understanding the world through scientific practice, while never forgetting that it's always we who do the understanding.

Being human, being at the center of our own worlds, is an immense and beautiful mystery. The explanations of science are one route to plumb that mystery — but not the only route.

If this is true, then what step do we take next?