Accessibility links
Life And Art Unite In 'Architecture Of Life' : 13.7: Cosmos And Culture The Berkeley Art Museum exhibit, whose title suggests the multiple ways structure, design and biology are joined in life and in art, offers a lot more, says blogger Alva Noë. 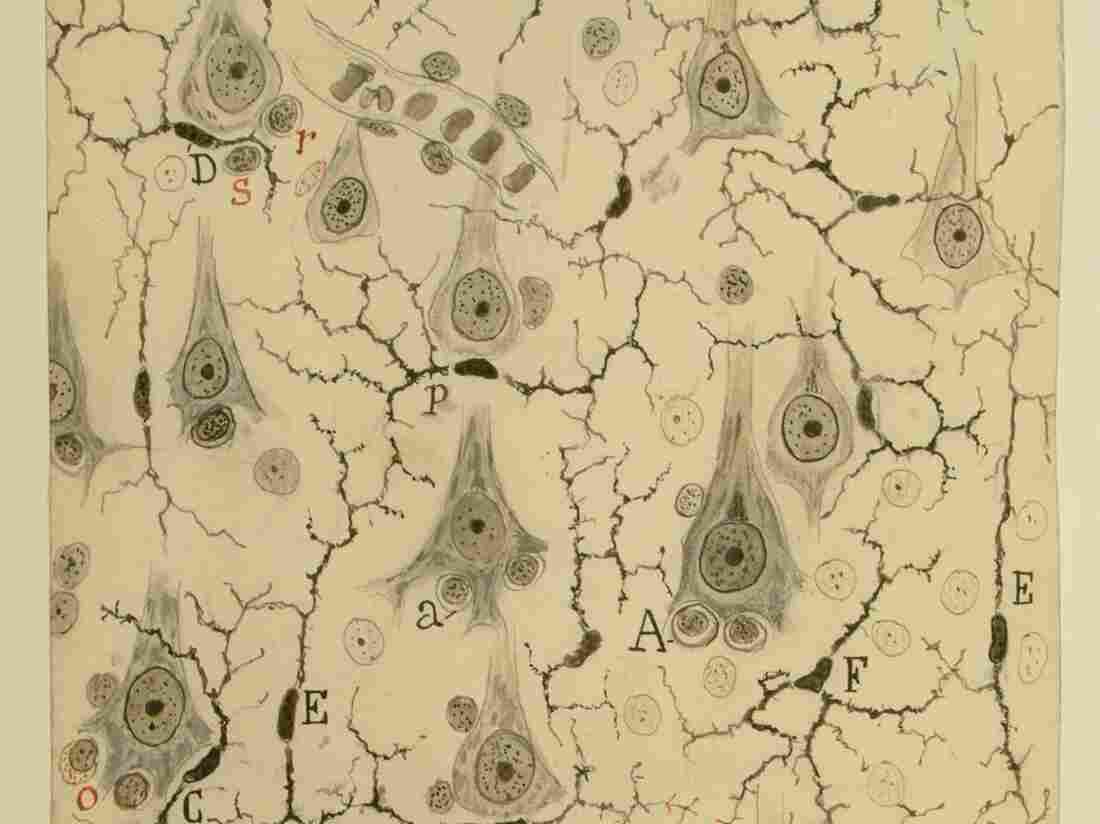 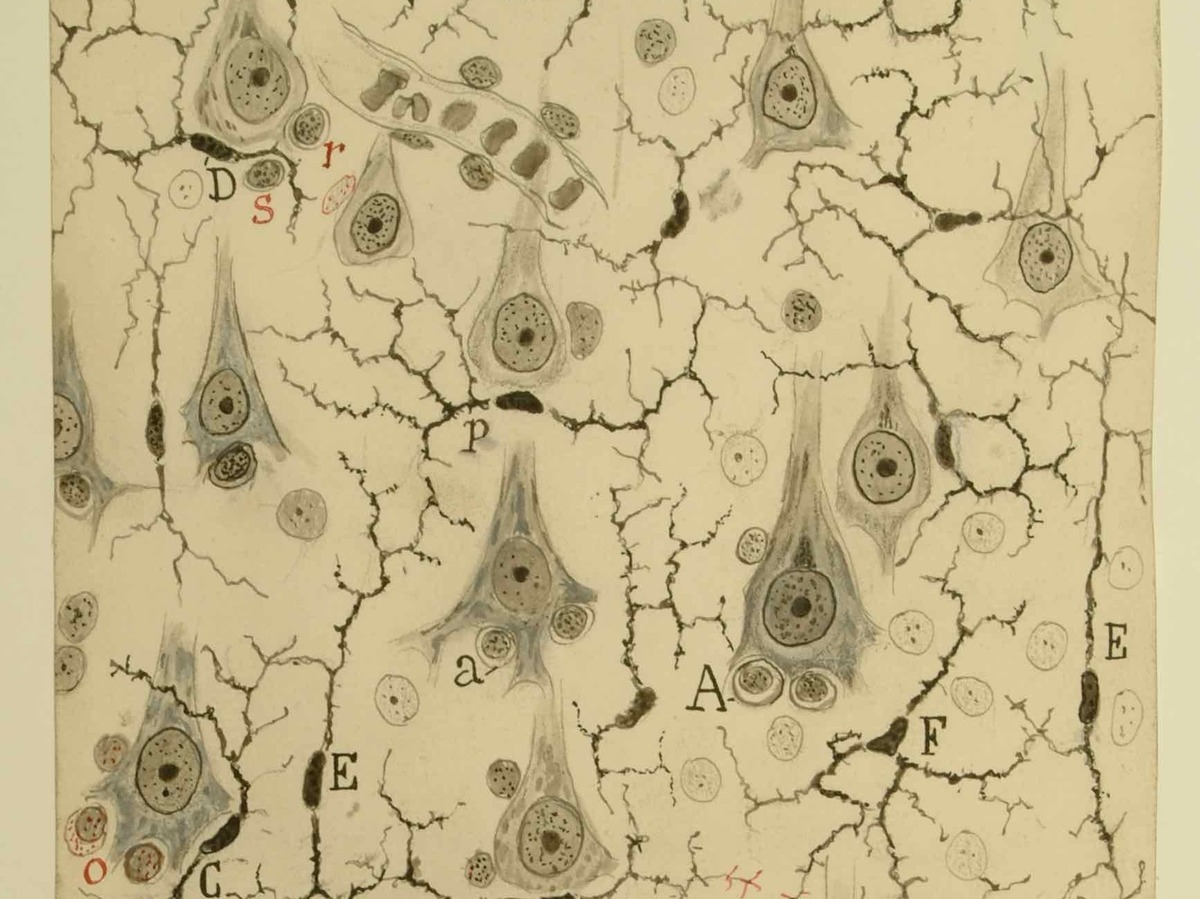 Santiago Ramón y Cajal wanted to be an artist. His dad wanted him to study medicine and encouraged him to draw cadavers at the graveyard.

The rest is history.

In 1906, he shared the Nobel Prize for Physiology and Medicine with the Italian biologist Camillo Golgi. Golgi had found a method to stain a neuron so you could see it under a microscope, and Spain's Ramón y Cajal used what he was thus able to see to produce drawings that make manifest the structure and functional organization of brain cells.

We forget that it is hard to see. To paraphrase Kant (loosely), seeing without understanding is blind, even if understanding without seeing is empty. A good drawing — for example of the working parts of an engine — is often much easier to interpret than an actual perceptual encounter with the engine itself. The engine, after all, is very complicated. What is important? What deserves notice? It's hard to know. But the drawing, when it is successful, is more than a mere representation; it is, really, the exhibition of what something is, of how it works, of what it is for. A good drawing is an image that has been imbued with thought.

That's what Ramón y Cajal did: He made explanatory pictures of previously unseen parts of our bodies. His drawings are used in textbooks to this day; new imaging technologies have not surpassed them (for some purposes at least). It is hard to imagine a better example of the way science and art can be united even when they are — even because they are — so different. (Something like this is the argument of Rembrandt's The Anatomy Lesson of Dr Nicolaes Tulp, as I have discussed here on an earlier occasion.)

Lawrence Rinder, director of Berkeley Art Museum and Pacific Film Archive, has curated the new show Architecture of Life, on display until May 29. Drawings by Ramón y Cajal are included in this exhibition; they are in the United States for the very first time. It's worth the price of admission just to see these marvels of empirical, hand-drawn, pragmatic exactitude and to encounter their imaginative life. But the show, whose title suggests the multiple ways structure, design and biology are joined in life and in art, offers a lot more.

Next to the Ramón y Cajal illustrations, are two playful, cartoonish drawings from 1624 by the Italian renaissance artist Giovanni Battista Bracelli, in which human forms are rendered as built up out of ribbons and boxes. It is as if these drawings admonish Ramón y Cajal that it is possible to get it right — gait, attitude, posture, form — with no regard whatsoever to anatomical detail! Indeed, it is not only Ramón y Cajal who is chided by the very presence of these delightful drawings, but also Carlo Urbino, Leonardo's contemporary, whose more conventional anatomical studies hang just on the other side of the Bracellis. 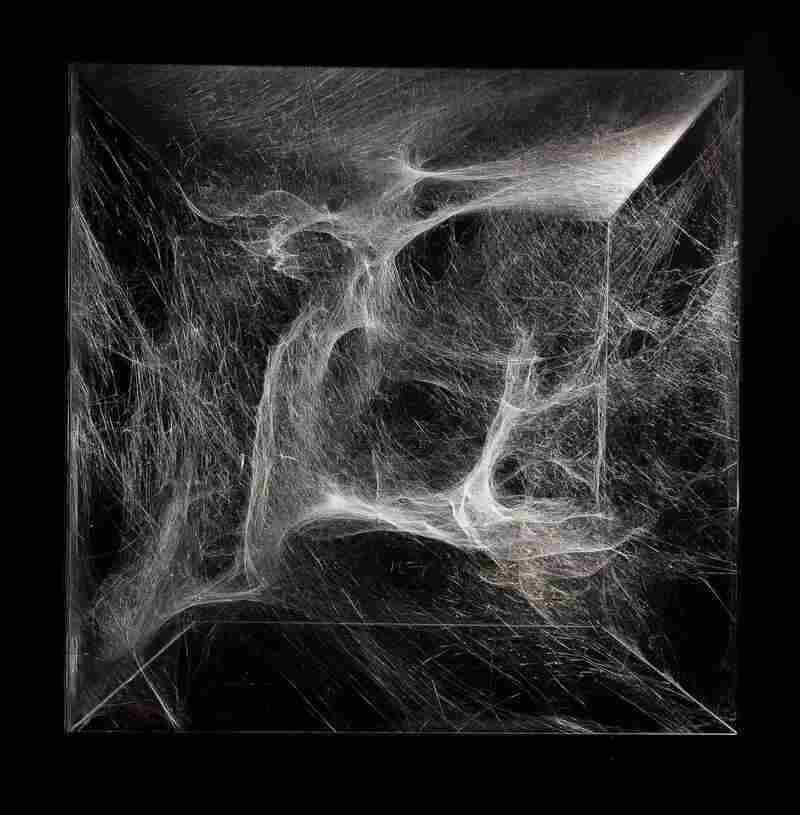 I had already started thinking about arborization in the brain — the way cell bodies shoot out axons in a web of connections — when I was inspecting Tomás Saraceno's spider art works in one of the exhibition's other galleries. Saraceno, a contemporary Argentine artist based in Berlin, works with spiders; that is to say he collaborates with them, by providing them armatures and scaffolds for their web building work. To see the results, as with Ramón y Cajal's drawings, is see into structure. It is, very literally, to see into the architecture of life, to experience, for example, that the structure on display in the spider's web is identical to that which we meet in the branches of a tree or the cells in the brain.

The exhibition as a whole showcases, then, in the large, something like the very tree-like entanglement that we see in Ramón y Cajal's drawings or Sarceno's webs, in the small. The show affords an opportunity make links and see family resemblances. Some of these are immediately obvious and communicated in the wall text, like, for example, the formal similarity between Ruth Asawa's biomorphic basket sculptures from the 1950s, which are based on a Native American wire-looping method of construction, and the principles of force distribution at work in Buckminster Fuller's geodesic structures, both of which are on display. Others may be less obvious. An original drawing of the Barcelona Pavilion by Mies van der Rohe is included in Architecture of Life. It is remarkable that the Barcelona Pavilion, one of the 20th century's most celebrated works of architecture, was a temporary structure that has nevertheless lived on, not only in documents such as this drawing, but precisely in the sort of web of ideas, arguments and analogies that are made available in this show. (The Barcelona Pavilion, originally constructed for the 1929 International Exposition there, was taken down shortly after. It was rebuilt from original plans in the mid-1980s.)

In the exhibition catalog, Rinder writes that "the idea of architecture has been widely employed as a framework through which to understand the fundamental nature of reality." This is the show's organizing principle. But the show is, at the same time, it is right to notice, a celebration of a very concrete piece of architecture, BAMPFA's new Diller Scoffidio + Renfro museum digs in downtown Berkeley. The museum, which was built under Rinder's directorship, is a great success, as is the inaugural exhibition Architecture of Life.