Accessibility links
WATCH: Ensnared Porcupinefish's Pal 'Keeps Vigil' As Snorkeler Sets It Free : 13.7: Cosmos And Culture When snorkelers in Thailand rescued a porcupinefish earlier this month, their film captured the fish's loyal companion, too. Barbara J. King takes a look at what appears to be a chummy relationship. 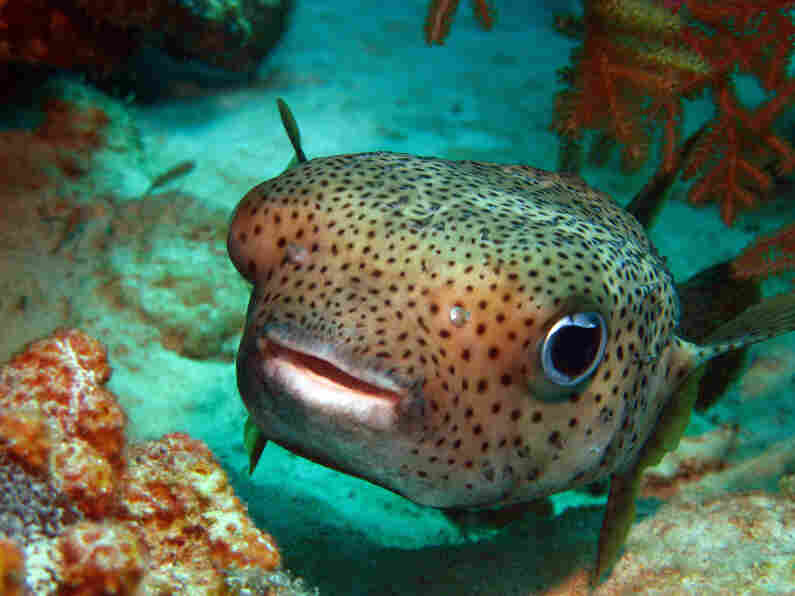 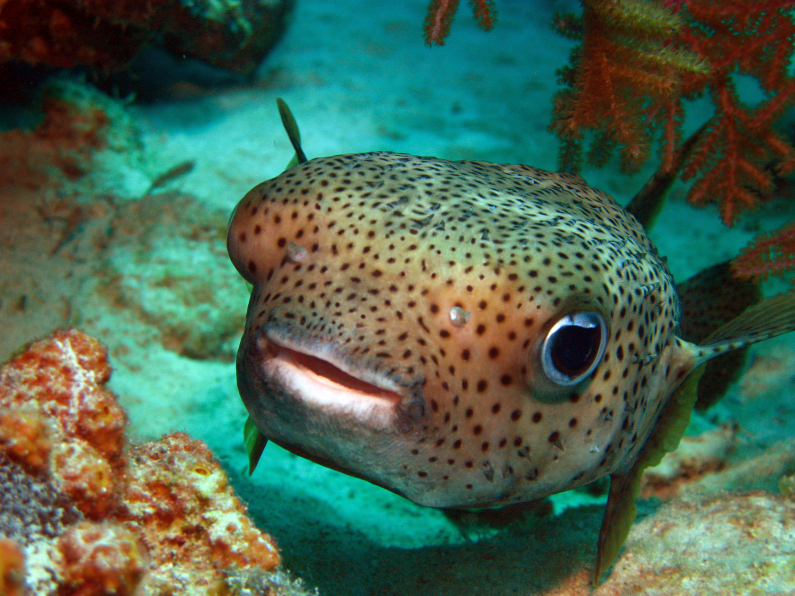 A video of a porcupinefish trapped in a net in Chaloklum Bay, Thailand, being freed by snorkelers who happened upon it got lots of traction last week.

But it's not just this act of kindness that's driving the video to be viewed. There's something special about the two-minute clip, even beyond this — even beyond the porcupinefish's ability to puff up. Have a look:

How striking that the second fish hovers so closely near the trapped one, even as the humans intercede! This, I think, is why the video has more than half a million views on YouTube.

The snorkelers were associated with Core Sea, the group devoted to marine research and conservation that first posted the video, filmed March 20.

I reached out to Core Sea this week in search of some details. For instance: Is the fish that was trapped a male and his companion a female, as I strongly suspect? I haven't heard back.

What I do know is that this species (Diodon liturosus) is the black-blotched porcupinefish. Not only can these fish swallow water and raise their spines to make themselves look bigger and fiercer, but they also harbor in their bodies a neurotoxin that contributes to self-defense.

Jonathan Balcombe, author of many books on animal behavior and emotion, including the forthcoming What a Fish Knows: The Inner Lives of Our Underwater Cousins, had this to say:

"This touching video shows virtuous behavior in two distantly related vertebrates. A porcupinefish bravely keeps vigil for his entrapped comrade, while a kindhearted snorkeler gingerly negotiates the situation with an improvised cutting implement — the bottom of a broken bottle.

"A skeptic might think the bystander fish is just curious, but if that were the case, the fish would have fled the scene when the large ape approached. Like many fishes, pufferfishes (of which the porcupinefish is a member) can live a decade or more and can form lasting bonds with others of their kind or with human caregivers."

Increasingly, animal behavior researchers recognize lasting bonds in animals beyond mammals and birds. Animal friendship is a real phenomenon. For my definition to apply, we would have to see these two porcupinefish hanging around together for a while before invoking "friendship." If they stay close together only during mating, then separate — which according to my reading is a probable explanation — then their filmed togetherness wouldn't qualify as a friendship.

But it would qualify as a strikingly close bond, and as yet more evidence that fish have a lot of fascinating things going on in their lives.