Accessibility links
Are We About To Send 'Spacechips' To The Stars? : 13.7: Cosmos And Culture Something radical and truly fascinating has begun — a group is putting in place a "credible" road map to interstellar travel, says astrophysicist Adam Frank.

Are We About To Send 'Spacechips' To The Stars?

Are We About To Send 'Spacechips' To The Stars? 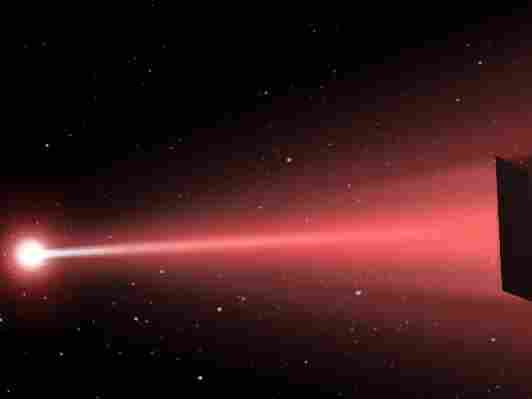 An artist rendering of a sail propelled by a laser. Q. Zhang/Courtesy of UCSB Experimental Cosmology Group hide caption 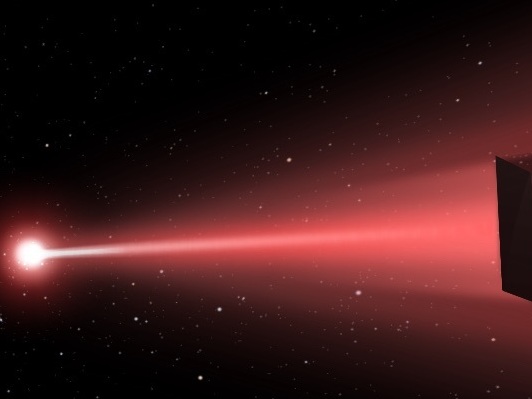 An artist rendering of a sail propelled by a laser.

That was the only line in an email my graduate student send me about a month ago. Along with her terse question was a link to a new paper on the astrophysics preprint archive (a website where newly completed research get posted). The paper's title was enough to set me back: "A Roadmap to Interstellar Flight" by Philip Lubin. "Wow," I thought to myself. "Is this for real?" I downloaded the paper and started reading.

One week later, as I was still crawling through the paper's physics, Russian billionaire philanthropist Yuri Milner announced the $100 million Starshot program — intended to leapfrog humanity across interstellar space.

Listening to even the briefest outline of the plan, I realized they were talking about Lubin's road map. While my student and I were asking whether this was for real, someone else was already sinking a ton of money into making it a reality.

So who is this guy Philip Lubin? What, exactly, is his "road map?" And, most importantly, is this for really for real?

Lubin is a respected scientist who has done most of his studies in cosmology. "Most of my work is very traditional," Lubin says. "I am a very conservative scientist. I don't usually go out on the edge."

So if Lubin is a guy who stays away from the edges, what about his road map? "This," Lubin says freely, "is definitely on the edge."

To set things in context, remember that we first escaped Earth orbit about 60 years ago. Since then we have accomplished some pretty impressive feats. But nothing we've done so far even gets us anywhere close to the stars. It took 10 years for the New Horizons probe to cross the solar system and reach Pluto. But even with its remarkable velocity of 58,000 km/hr it would still require around 100 millennia for New Horizons to cross typical interstellar distances. That means the challenges involved in getting an interstellar probe to its target in anything close to a human lifetime are immense.

That is where Lubin comes in. Along with his studies of the early universe, Lubin and his team have also been working on technologies associated with "directed energy." When you hear that term you could think "laser" — but there's more to it than that. Lubin has been using advances in the science of photonics to explore arrays of laser systems that work together creating extremely powerful, large-scale beams of directed energy.

Lubin calls his idea Directed Energy System for Targeting of Asteroids and exploRation or DE-STAR. As the name implies, the genesis of the research program was using the lasers to defend Earth from asteroids.

"Since we started our program, we've probably gone through about 100 undergraduate researchers because they just love the idea of destroying something," Lubin told me.

And destroy things they did.

"We had all kinds of objects in the lab that [the students] blew holes through," says Lubin. "One student brought in a bullet-proof vest and we blew a hole through that."

But Lubin's team quickly saw the possibilities for interstellar travel. Light particles (called photons) carry momentum and can push on the things they interact with. This is the principle behind proposals to use sunlight to push giant solar sails around interplanetary space. People also have imagined using Earth-bound lasers fired at a sails for propulsion before.

But it's the low-cost "phased array" lasers Lubin studies that represent a new direction. Adding them to the equation means high-powered spacecraft drivers might be possible in near term (decades not centuries).

Reaching the stars, however, requires reaching velocities close to light speed. The nearest star is 4.3 light-years away. That means it would take 4.3 years traveling at light speed to get to there. But the more mass you want to send to the stars, the more energy you need to accelerate that mass close to light speed. While Lubin's directed energy system can push a sail (and a tethered spaceship) outward, a reasonable version of the machine can only get the craft close to the light-speed limit if you think really, really small. That's why rather than spaceships, Lubin wants to send "spacechips."

As his road map paper puts it, "...we consider functional spacecraft on a wafer, including integrated optical communications, imaging systems, photon thrusters, power and sensors combined with directed energy propulsion."

So, basically, we're talking about sending smartphones to the stars. That, my friends, is edgy.

So how did the edgy ideas in Lubin's road map become part of Yuri Milner's $100 million Starshot program? After giving a talk at the SETI Institute, Lubin's paper found its way to members of Breakthrough Initiatives, including Milner. Then, in January, Lubin and Milner met to discuss the road map.

"He's a truly fascinating individual," Lubin says of Milner. "He's both someone of means and quite a deep thinker. He had been dreaming of doing something in the realm of interstellar but nothing he had looked at was credible."

According to Lubin, Milner and his institute had been exploring "real ideas" in the sense of thinking about, for instance, using anti-matter as a propellant. But while anti-matter is real and its physics is understood (as opposed to a warp drive), doing anything meaningful with it was just too hard (and, hence, too expensive) to imagine.

"Our stuff is really hard, but anti-matter is even harder," says Lubin.

So what Milner saw in Lubin's approach was something that, with time and development, might be technologically feasible and economically possible. Lubin says Milner told him that this idea was the first thing he had seen that was really credible.

So the question Milner, Lubin and others, including Harvard astrophysicist Avi Loeb, tried to answer in their meeting was whether the road map lead to something real. The answer Milner eventually found was "yes." And that, in part, was how the Starshot program was born.

Lubin takes pains to explain that what must happen now is a long, multi-decade road of development. In particular, what is needed is not just new technology but the new technologies that can make the next generation of new and cheaper technologies possible.

"If someone asked in 1961 how much would it cost to get the moon in 1962 you would say that question doesn't even make sense," Lubin says. That's because multiple layers of breakthroughs that fed on each other were all required to make the moon landing possible.

So if the question is "Are we ready to send a starchip to the nearest stars soon?" — the answer is most definitely no. But something new, something radical and something truly fascinating has most definitely begun. Lubin, Milner and Breakthrough Initiatives are indeed dreaming a most audacious dream. Perhaps Lubin himself put it best in his road map paper:

"We posit a path forward, that while not simple, it is within our technological reach. We propose a road map to a program that will lead to sending relativistic probes to the nearest stars and will open up a vast array of possibilities of flight both within our solar system and far beyond... "

Amen to that, brother. Now we shall wait and see what you come up with.