Accessibility links
A Gorilla Is Killed, And Our Parent-Shaming Culture Springs To Life : 13.7: Cosmos And Culture Anthropologist Barbara J. King says the Harambe conversation should move away from a discourse of shaming to one looking at hard questions about confining sentient animals to zoos in the first place.

A Gorilla Is Killed, And Our Parent-Shaming Culture Springs To Life

A Gorilla Is Killed, And Our Parent-Shaming Culture Springs To Life 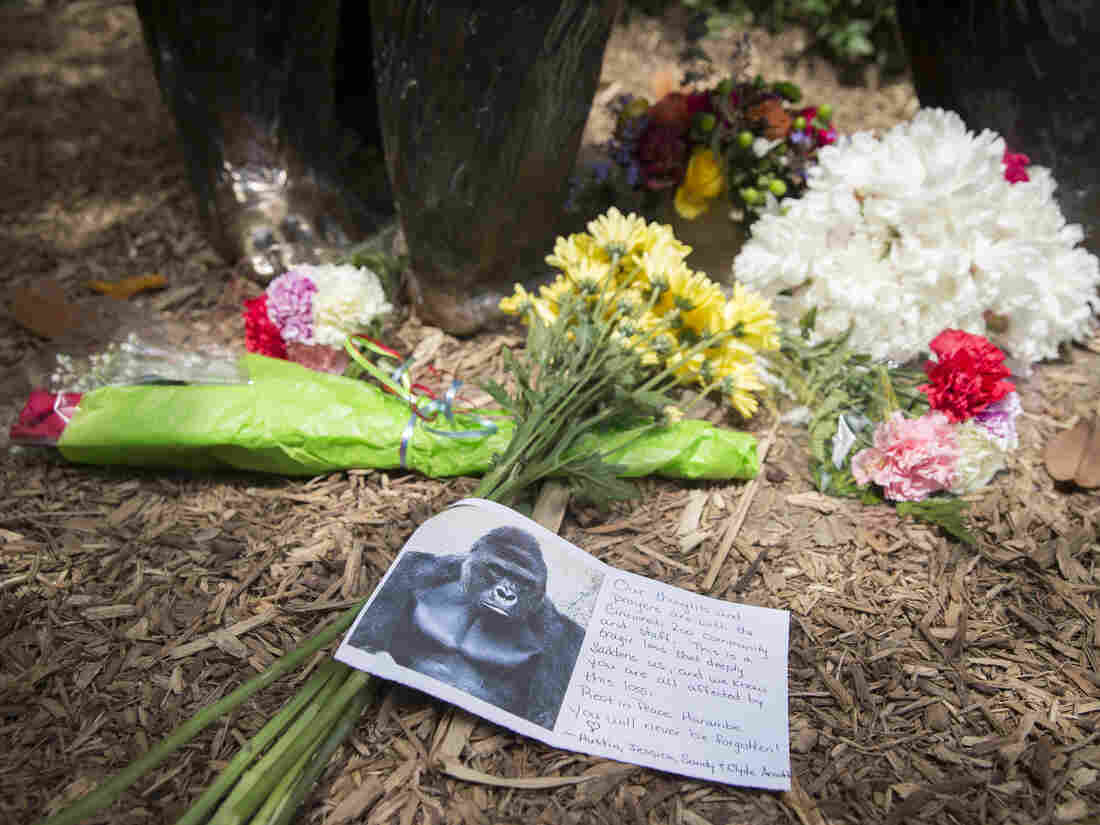 A sympathy card rests at the feet of a gorilla statue at the Cincinnati Zoo & Botanical Garden. John Minchillo/AP hide caption 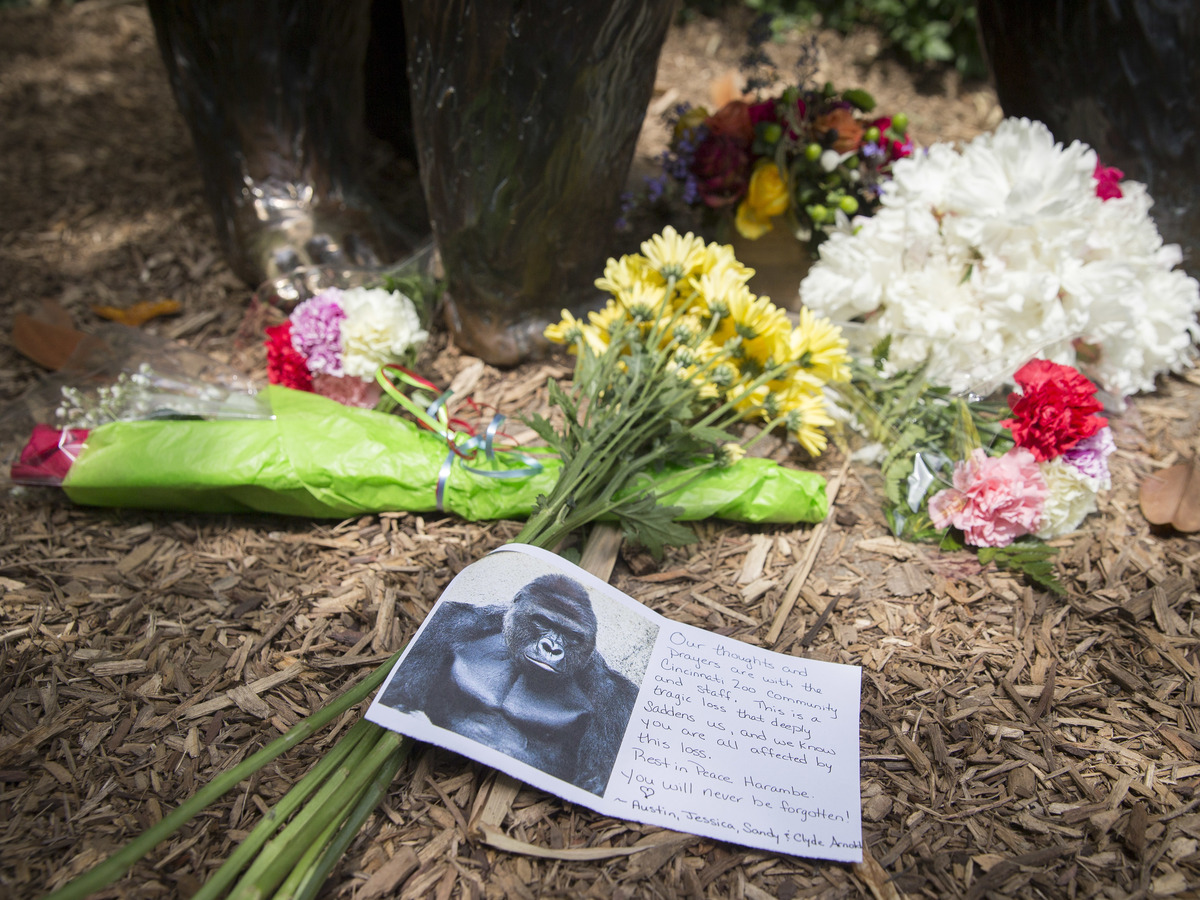 A sympathy card rests at the feet of a gorilla statue at the Cincinnati Zoo & Botanical Garden.

Worldwide reaction continues in the aftermath of last Saturday's tragic incident at the Cincinnati Zoo in which the 17-year-old western lowland gorilla Harambe was shot to death by zoo personnel.

Events unfolded quickly after a 3-year-old boy remarked (according to witnesses) that he wanted to go into the gorilla habitat, then crawled through protective barriers and fell into that enclosure. Harambe, in an understandably agitated state and aroused further by the shouts of zoo visitors, held the child and then dragged him through the waters in a moat. The gorilla was killed because he was thought to have put the child's life at risk.

Headlines or lead paragraphs from articles published in the United States, the United Kingdom and Australia speak of "outrage" — but let's not miss the fact that it's also shaming behavior we're witnessing, largely aimed at the boy's mother.

All of us, by now, have probably seen examples of the vitriol involved in this shaming. These comments left by readers of NPR's coverage give the flavor of the more mild discourse:

"Shameful. That gorilla was irreplaceable. And trying to save the kid from an irresponsible mom who was too cowardly to jump in after the kid."

"My guess is that the poor parenting of these parents will lead to this child in 14 years being able to fulfill his wish of being behind bars."

"If a parent is unwilling to watch over their child at all times, especially in a place that keeps wild animals, then that person should not have the child in the first place."

On Facebook, I've also read opinions that the bullets should have been aimed not at Harambe, but at the parents and the child instead, and that the mother should be sterilized.

Online petitions don't go that far, but do suggest that there's widespread support for a vigorous blame-and-shame-the-parents response. As of Wednesday morning, more than 430,000 people had signed the petition that focuses on "parental negligence" and states flatly: "This beautiful gorilla lost his life because the boy's parents did not keep a closer watch on the child." It continues:

"We believe that this negligence may be reflective of the child's home situation. We the undersigned actively encourage an investigation of the child's home environment in the interests of protecting the child and his siblings from further incidents of parental negligence that may result in serious bodily harm or even death."

This morning, CNN reported that police are now looking to investigate the child's family.

The shaming behavior we're witnessing toward this mother is a peculiar kind of mob mentality. In the introduction to a new collection of essays, American Shame: Stigma and the Body Politic, editor and professor of languages and literature Myra Mendible describes the media- and social-media-based "bonding ritual" that in our society today "fills in for the spectacles that once were town square stocks and pillories."

Mendible focuses on the response to "celebrities and power brokers," but this week we've seen exactly the same frothing and foaming directed at people who never chose the spotlight. Mendible makes a critically important point when she writes:

"These interactions deflect attention from the self and toward its objects: shame in this context has nothing to do with our own behaviors or flaws. It remains safely detached — a story we tell about them."

On Tuesday, I asked Emily Willingham, a developmental biologist and co-author with Tara Haelle of The Informed Parent: A Science-based Resource for Your Child's First Four Years, for her thoughts about the parent-shaming firestorm that's going on. She responded in this way by email:

"There's a reason the saying is 'It takes a village to raise a child' instead of 'it takes one parent in a crowd of people.' Children are attracted to the forbidden and tend to be consummate escape artists. The combination of curiosity and Houdini-like skills means that many, many parents have had the experience that this mother had: a child slips away in a second, two seconds of chaos or distraction. It's just that most of us also have the good fortune for these situations not to end in tragedy. People want to 'other' parents who find themselves in the national gaze after a tragedy — it happens every time, facilitated by social media to full-throated howling. It's partly a defensive way to rationalize how it will never, ever happen to you and partly because apparently we're all a pack of judgmental goons."

Willingham's points resonate with me, as do Jeffrey Kluger's words on this same topic over at Time.

I remember so vividly when my daughter, at ages 3 and 4, adopted the alarming habit of quite suddenly putting her head down and running for all she was worth, away from us — toward the road and moving cars, toward anything at all in her path. My husband or I always caught her before anything awful happened, but is that because we were better parents than the mother in question at the zoo? No.

Some of the shaming is aimed not at the mother, but instead at the individuals at Cincinnati Zoo who made the call for a "kill shot" instead of a tranquilizer shot. On Tuesday, I addressed this point, and the tragic loss of Harambe more generally, in a nine-minute interview with Warren Olney on the NPR program To the Point. You can listen to our conversation here.

Much in the same way that Marc Bekoff did in writing yesterday at Scientific American, I tried in that conversation to steer us away from a discourse of shaming to one that looks at hard questions about confining sentient animals to zoos in the first place.