Accessibility links
The Madness Of Humanity: Nuclear Weapons And M.A.D. : 13.7: Cosmos And Culture What would happen if the world's countries armed with nuclear weapons engaged in all-out confrontation? Marcelo Gleiser considers this in the first of a series of essays on our collective future. 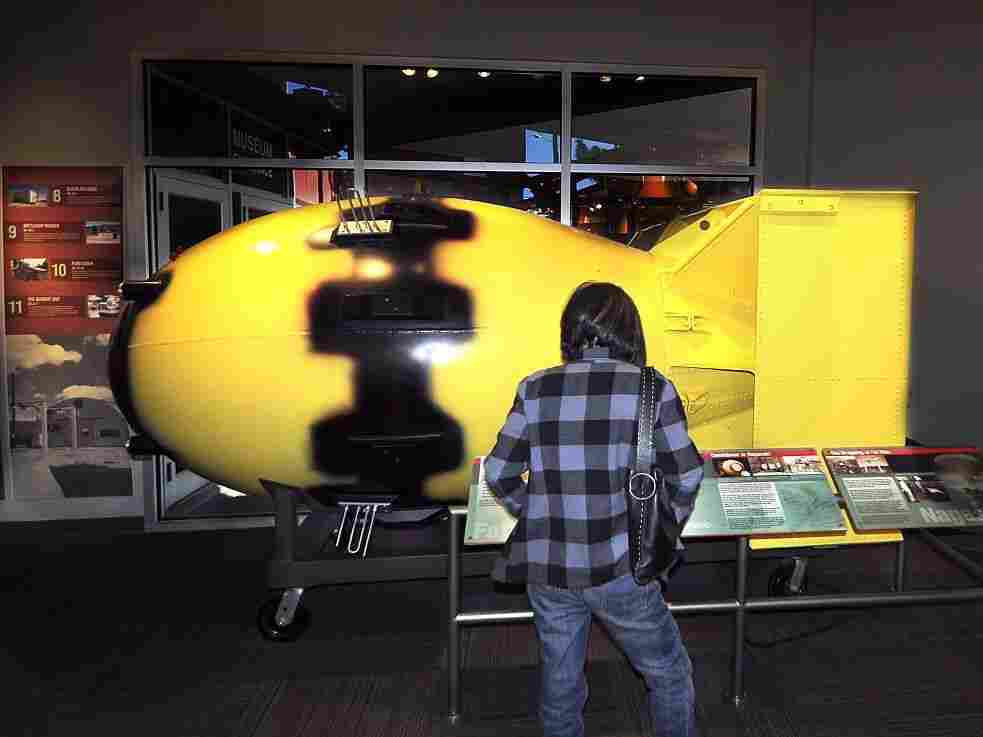 A tourist at the Bradbury Science Museum in Los Alamos, New Mexico, in February examines a full-size replica of the "Fat Man" atomic bomb which was dropped on Nagasaki, Japan, on Aug. 9, 1945. Los Alamos is home to the Los Alamos National Laboratory which was established in 1943 as part of the Manhattan Project. Robert Alexander/Getty Images hide caption 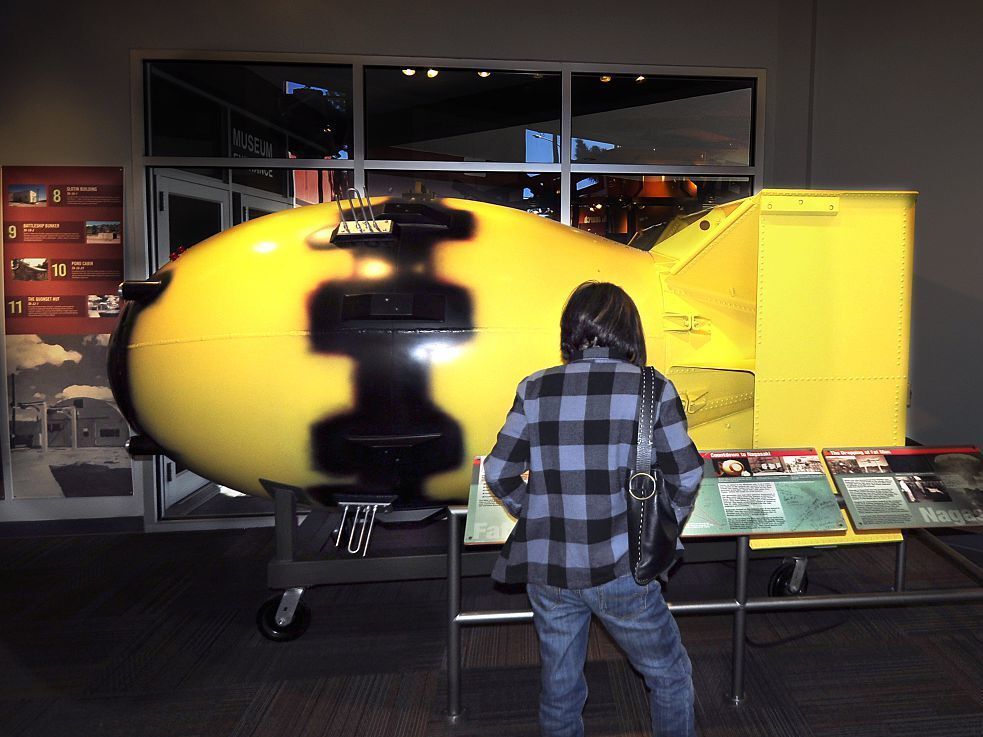 A tourist at the Bradbury Science Museum in Los Alamos, New Mexico, in February examines a full-size replica of the "Fat Man" atomic bomb which was dropped on Nagasaki, Japan, on Aug. 9, 1945. Los Alamos is home to the Los Alamos National Laboratory which was established in 1943 as part of the Manhattan Project.

This is the first in a series of essays concerning our collective future. The goal is to bring forth some of the main issues humanity faces today, as we move forward to uncertain times. In an effort to be as thorough as possible, we will consider two kinds of threats: those due to natural disasters and those that are man-made. The idea is to expose some of the dangers and possible mechanisms that have been proposed to deal with these issues. My intention is not to offer a detailed analysis for each threat — but to invite reflection and, hopefully, action.

We start with M.A.D., or Mutually Assured Destruction, an accurate description to what would happen if the world's countries armed with nuclear weapons engaged in direct, all-out confrontation.

In 1933, as Adolf Hitler was ascending to power in Germany, Hungarian physicist Leó Szilárd proposed the notion of a nuclear chain reaction, whereby neutrons released from radioactive atomic nuclei would hit other heavy nuclei causing them to split (fission) into smaller nuclei. Every time this splitting happened, a little bit of energy was released. Do it for a huge number of atoms and you get a chain reaction, with a related huge amount of released energy. In 1939, together with Enrico Fermi, Szilárd showed that a multiplication of released neutrons was possible.

Szilárd knew that the possibility of a chain reaction represented a shift in world history. An explosive device with an uncontrolled chain reaction would have devastating consequences. Szilárd convinced Albert Einstein, at the time the world's most famous scientist, to write a letter to Franklin Roosevelt urging the U.S. to embark on a serious bomb-making effort, lest the Nazis did it first. The result, in late 1941, was the Manhattan Project, a massive effort led in Los Alamos by J. Robert Oppenheimer and overseen by Major General Leslie Groves.

On July 16, 1945, the first bomb was detonated in the desert of Alamogordo in New Mexico. The mushroom cloud raised 40,000 feet and broke windows 100 miles away. Upon seeing the effects of their invention, Oppenheimer pronounced the now famous words from the Bhagavad Gita: "Now I am become Death, the destroyer of worlds." On August 6 and 9, the U.S. dropped nuclear bombs in Hiroshima and Nagasaki, so far the only use of atomic weapons on a civilian population. In a few months, between 90,000 and 146,000 people died in Hiroshima and between 39,000 and 80,000 in Nagasaki, with an estimated half during the first day after the bombing.

This past May, President Obama visited Hiroshima to offer his respects for the victims. This was the first visit to Hiroshima by a sitting U.S. president. "We have known the agony of war. Let us find the courage, together, to spread peace, and pursue a world without nuclear weapons," he said.

Unfortunately, we are very far from this goal. After the fission bomb came the much more powerful fusion bomb, or thermonuclear bomb, or H-bomb, whereby for fractions of a second the fusion of isotopes of hydrogen into heavier nuclei repeats the processes that in varied ways light up the sun and all stars.

The U.S. built its first H-bomb in 1952, thinking it had then reached total nuclear supremacy. In less than year, the Soviets had tested their first H-bomb. Panic ensued.

During the 1950s and 1960s, the world witnessed an accelerated build up of nuclear weapon capability. The Cold War was at full speed. As former Secretary of Defense William J. Perry reports in his recent memoir of 50 decades at the forefront of nuclear weaponry, My Journey at the Nuclear Brink, the Cuban Missile Crisis didn't deteriorate into a full-blown nuclear war due to sheer luck. Working then at gathering information about the Soviet missiles being deployed in Cuba, Perry believed that everyday would be "my last day on earth."

At the height of the Cold War, the U.S. had 1,054 intercontinental ballistic missiles and 656 submarine-launched ballistic missiles according to the National Security Archive. Different sources cite different numbers. For example, the online textbook Alpha History lists that, by 1962, the U.S. had almost 7,000 nuclear warheads while Soviet Russia had 500. In any case, the numbers are staggering. Soon, other countries would be part of the nuclear club: the UK, France, China, Israel, South Africa, India, Pakistan.

A massive decommissioning program was initiated. Thousands of nuclear weapons were destroyed under the SALT I and II treaties and then, at the end of the Cold War, under the START I and II treaties of the early 1990s. (There were issues with implementation and ratification, of course.) The New START Treaty was ratified in 2011, forcing the numbers of still-operative strategic nuclear missile launchers to be reduced in half. The numbers dropped, but a huge amount of weapons are still active. In particular, the treaty doesn't regulate the number of stockpiled nuclear warheads, which remains in the high thousands in both in Russia and the U.S. So, M.A.D. remains as much a threat today as it was in the 1960s.

To this we must add a whole new dimension to the problem, the threat of nuclear terrorism. Perry comes up with a scenario where terrorists build an improved nuclear device and blow up the White House and Capitol Hill, killing more than 80,000 people and disrupting our society. Or a war between India and Pakistan, with devastating global impact.

Nuclear warfare may seem now a distant worry in the minds of many; with more immediate problems, people's thoughts tend to drift off. Children no longer do nuclear safety drills in school as they used to in the 1950s and 60s. But the threat remains — and is palpable. In certain ways, the danger is higher now, given the level of global political instability and power in the hands of terrorist extremists that have given ample evidence that the taking of human lives is not a concern to them. And there is always the threat that an unstable politician will gain control over nuclear weapons. What Hitler couldn't do, others now can.

Only a worldwide effort to truly dismantle the global nuclear arsenal with absolute supervision from a conglomerate of countries would be effective. Nuclear materials must be assembled and neutralized. Maybe this is the sort of global initiative that lives in the realm of dreams. However, anyone that knows of the danger of nuclear holocaust would hopefully agree. A reading of Cormac McCarthy's The Road may be a good start, followed by Perry's sobering memoir.

It is ironic that the same Enrico Fermi that first implemented a nuclear chain reaction in the laboratory came up with the Fermi Paradox, which asked where are the intelligent aliens out there. In a nutshell, if intelligent aliens exist in the galaxy, they'd have plenty of time to colonize it. But haven't. One of the possible answers to Fermi's Paradox is terrifying: Any civilization that reaches nuclear capability is bound to destroy itself sooner or later. Let this speculative suggestion be a warning to humanity and its collective future.