Accessibility links
The Madness Of Humanity Part 2: Planetary Predation : 13.7: Cosmos And Culture Even with all the uncertainty in the numbers, we seem to be marching towards a point of saturation, where our current practices and needs will exhaust what the planet can offer, says Marcelo Gleiser. 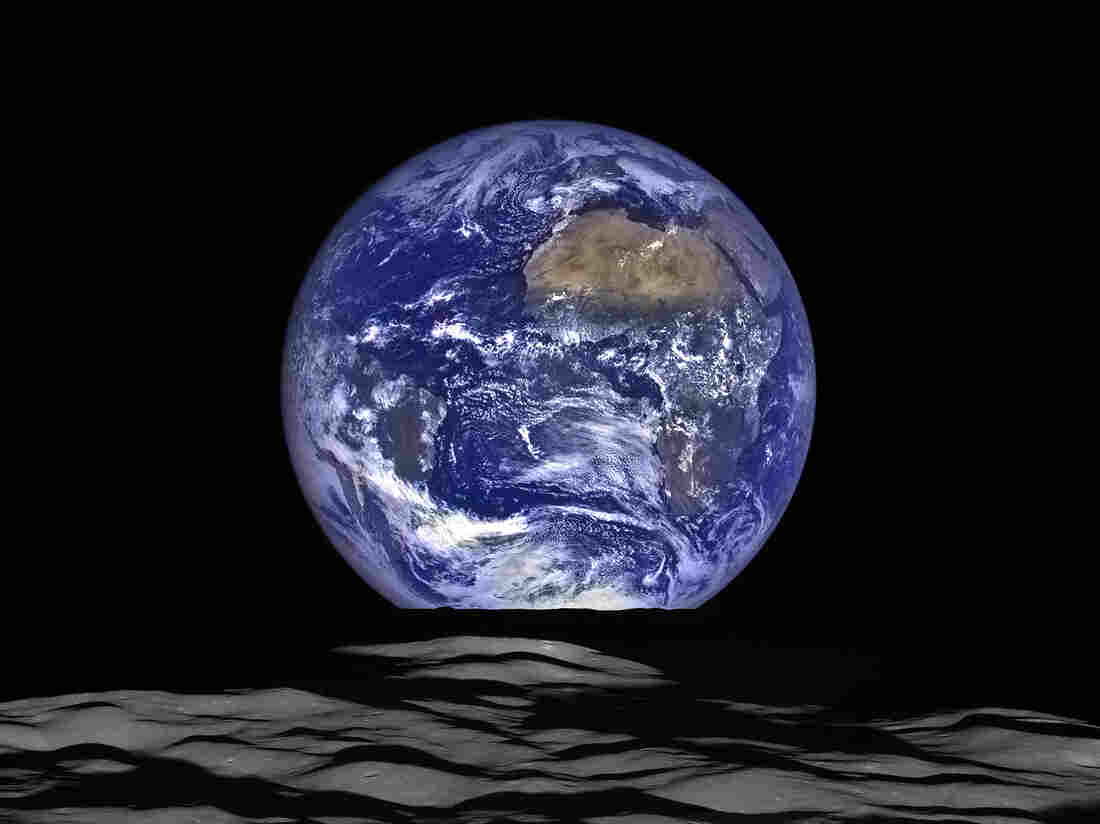 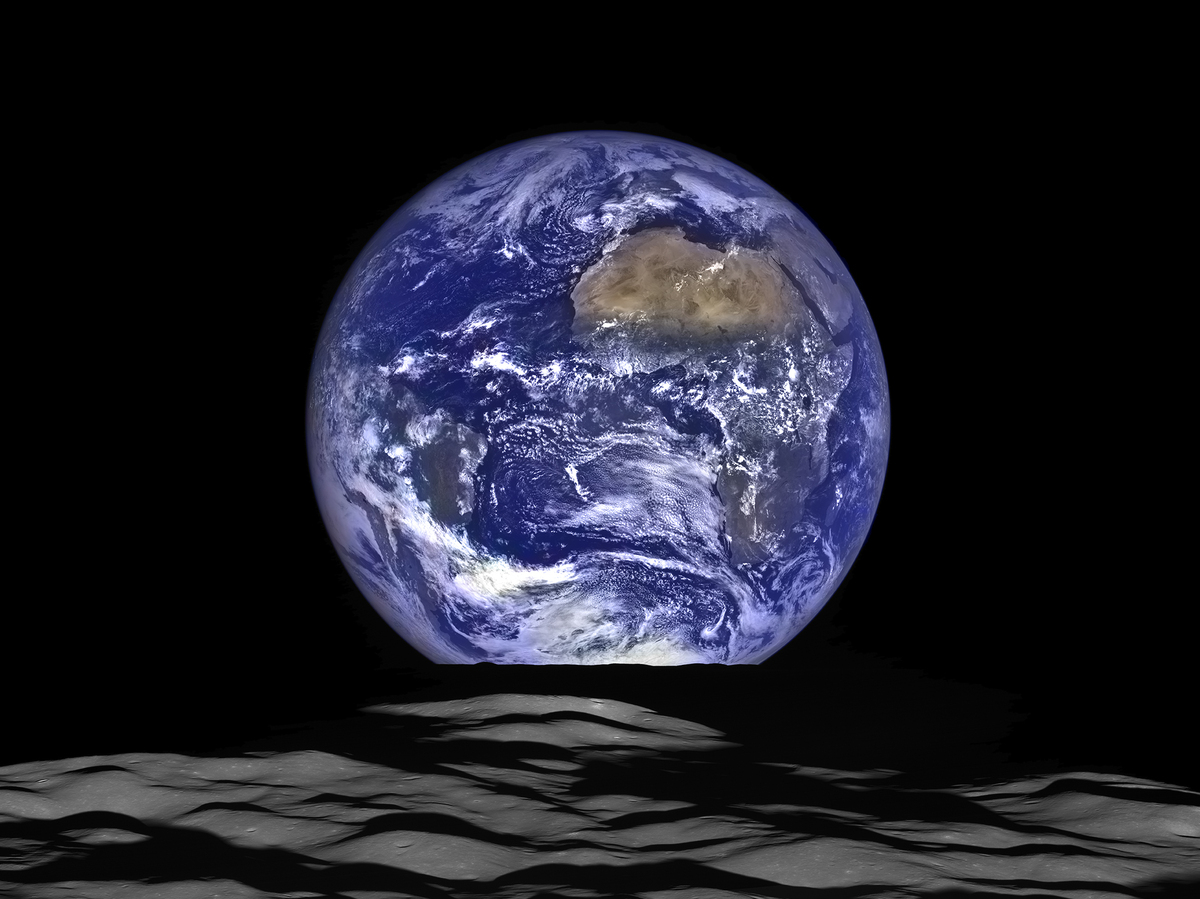 NASA's Lunar Reconnaissance Orbiter (LRO) captured a unique view of Earth from the spacecraft's vantage point in orbit around the moon.

This is the second in a series of essays concerning our collective future. The goal is to bring forth some of the main issues humanity faces today, as we move forward to uncertain times. In an effort to be as thorough as possible, we will consider two kinds of threats: those due to natural disasters and those that are man-made. The idea is to expose some of the dangers and possible mechanisms that have been proposed to deal with these issues. My intention is not to offer a detailed analysis for each threat — but to invite reflection and, hopefully, action.

On Feb. 14, 1990, the space probe Voyager 1 took a photograph of planet Earth from a record distance of about 3.7 billion miles, 40.5 times the distance between the Sun and the Earth. That's about as far as Pluto.

In the photo, Earth fills less than a pixel, a tiny "pale blue dot" against the emptiness of space. The astronomer Carl Sagan had the idea to instruct the space probe to turn around and take one last photo of Earth. In a public address at Cornell University on Oct. 13, 1994, Sagan reflected on the meaning of the picture:

"[...] To my mind, there is perhaps no better demonstration of the folly of human conceits than this distant image of our tiny world. To me, it underscores our responsibility to deal more kindly and compassionately with one another and to preserve and cherish that pale blue dot, the only home we've ever known."

From a cosmic perspective, this small planet means almost nothing, just another world among trillions of others. But to us, this is what we've got. This is where we live, and where we will be living for many, many generations to come.

The image of a small pixel hovering in nothingness brings out the fragility of our world. The Earth is a finite planet, with finite resources. Yet, in the past 90 years, the human population grew from 2 billion to about 7.5 billion. (The world population clock gives an approximate count.) In an estimate from Oct. 31, 2011, the United Nations Population Fund put the total population at 8 billion in 2025. The global growth rate is slowing down, but the numbers are staggering and will continue to grow, even if more slowly.

In the late 18th century, Thomas Malthus argued that humanity's growth was incompatible with Earth's capacity to provide us with sustenance:

"The power of population is so superior to the power of the Earth to produce subsistence for man, that premature death must in some shape or other visit the human race."

Of course, Malthus didn't factor in the remarkable ability we have to come up with solutions to our problems, in this case the optimization and mechanization of agricultural techniques that greatly enhanced food production in the past 150 years. However, the fact remains that Earth has only a finite amount of potentially arable land, about 7.7 billion acres. (Note that Earth has about 36.5 billion acres of land, about 29 percent of its total surface area. But we must discount mountainous regions, deserts, swamps and non-irrigable areas.) In 2013, the total amount of arable land was 3.5 billion acres.

At current production rates, this amount of land could yield about 2 billion tons of grains annually. This could feed about 10 billion vegetarians but only about 2.5 billion omnivores, given the amount of grains given to livestock and poultry. We give much of our crops to the animals we eat.

This estimate has two essential assumptions: first, that water will remain available at current levels; second, that global warming won't interfere with the amount of arable land or with the annual crop output due to weather disruption and instability. Global warming is certainly a key factor here, given its impact not only on arable land, but also on the potential loss of land due to rising ocean levels and population displacement.

Although the estimates are necessarily very approximate, and assume geopolitical stability (see last week's blog entry on the perennial threat of nuclear holocaust), unless we place our bets in some remarkable breakthrough in agricultural techniques (potentially through genetically-modified organisms, a very contentious subject), a reasonable forecast for the maximum population sustainable on Earth hovers around 10 billion.

According to the United Nations Population Fund this number will be reached in the year 2083.

Even with all the uncertainty in the numbers, we seem to be marching towards a point of saturation, where our current practices and needs will exhaust what the planet can offer. Blind faith in science is a very dangerous policy, given that we can't predict how successful we will be in the future given our successes of the past: Science doesn't advance in a linear or predictable fashion.

There are a few obvious, but certainly challenging, steps that would attenuate the mounting pressure. Global-reaching policies need to be implemented to educate the population on the dangers of unchecked growth, and should include easier availability of contraceptives, despite cultural and religious barriers; our meat-eating habits need to be redirected toward a more plant-based diet; sustainable, renewable energy sources should become economically more viable so as to attract a growing number of individuals and corporations; a new planetary ethics based on global sustainability should be part of every school curriculum and corporate charter.

All these steps are hotly politicized and generate endless debate. Often, they are labeled as part of a liberal political agenda. However, education about population growth (often related to abject poverty), about what we eat and where it comes from, about the obvious need to preserve the environment and our planet for the mutual benefit of humans and other living creatures, should bypass any politically-charged debate. It should be a modern extension of the Golden Rule from humanity to life and the planet: Treat all forms of life how you wish to be treated; treat the planet how you wish your home to be treated.

Why? Because we only have this pale blue dot to live on.