Accessibility links
How Human Should A Gorilla Be? : 13.7: Cosmos And Culture Chosen four decades ago for a sign language research project, gorilla Koko remains caught between ape and human worlds. Barbara J. King takes a look at her life as seen in a new documentary. 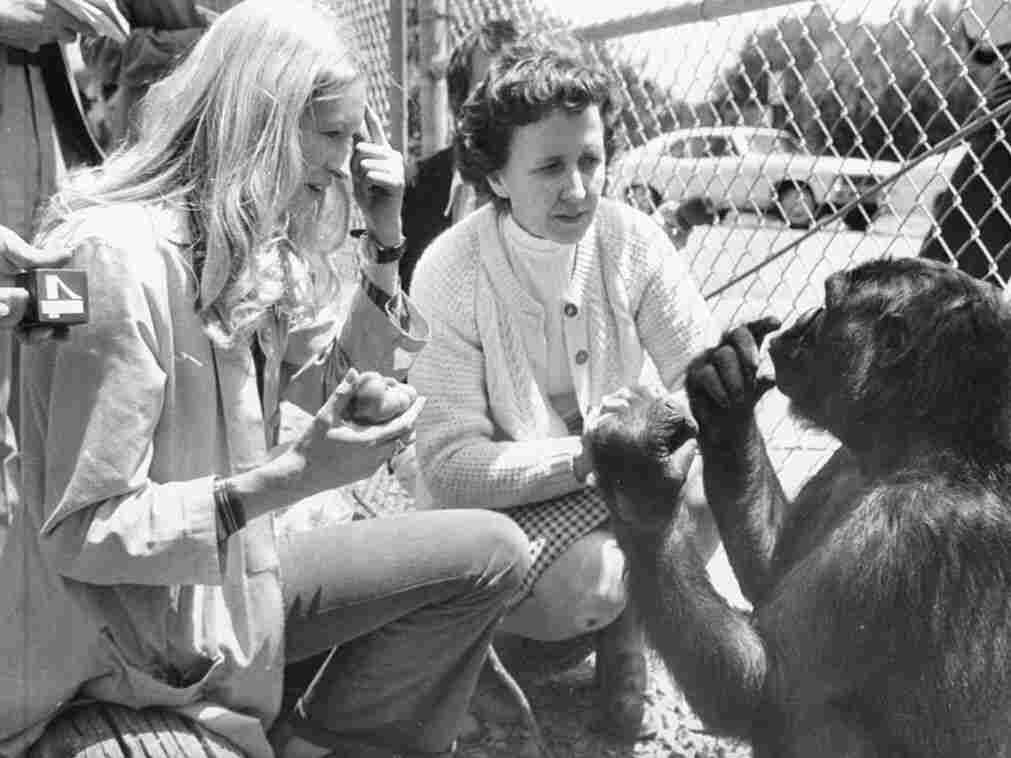 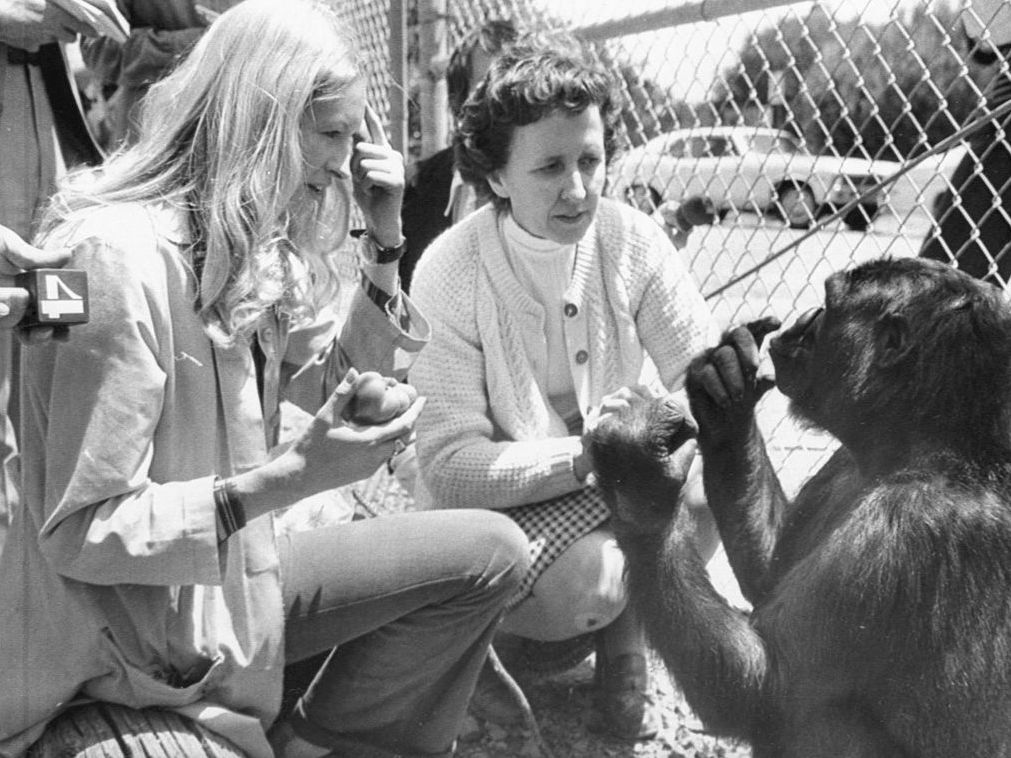 Koko, seen here with Penny Patterson (left) at age 4 1/2 — nearly 40 years ago — was taught sign language. June Monroe, an interpreter for the deaf at St. Luke's Church who helped teach Koko, is in the center.

The program tells the story of how Koko, age 44, one of two gorillas living at The Gorilla Foundation in Woodside, Calif., began to learn as an infant to communicate with humans through use of American Sign Language (ASL). She went on to become the most famous gorilla in the world.

The power of this film — and indeed of Koko's entire life — is its convincing demonstration of how reflective gorillas are, and how profoundly they may feel emotions. Penny Patterson, the psychologist who began working with Koko when the gorilla was an infant at the San Francisco Zoo in 1971 — and who now, along with Ron Cohn, is now Koko's human family — says as much in the film: It's not how many ASL signs Koko acquired at what age that matters most, but instead the understanding that Koko feels and expresses love.

Famously, Koko felt quite sad in 1984 when her adopted kitten Ball was hit by a car and died. How do we know? Here is nonhuman primate grief mediated through language: In historical footage in the film, Patterson is seen asking Koko, "What happened to Ball?" In reply, Koko utters these signs in sequence: cat, cry, have-sorry, Koko-love. And then, after a pause, two more signs: unattention, visit me.

I believe that Koko felt sadness at Ball's death and that she described her feelings by combining ASL signs together.

That Patterson has devoted her life to Koko is also not in question. Emotion is written on Patterson's face and in her eyes when one of the BBC filmmakers asks her if she has any regrets. Koko would be "more fulfilled," Patterson says, if she had been able to be a mother and have her own gorilla family group. (Koko never mated with male gorillas Michael and Ndume brought to the Gorilla Foundation for that purpose.)

But in some critical ways, the BBC has given Patterson an easy pass. No mention is made of the Gorilla Foundation's $2.5 million fundraising initiative to relocate Koko to a preserve in Maui; the money was spent but the move never happened.

Two years ago, Jane Hu wrote in Slate about the mass resignation of Gorilla Foundation employees and volunteers that occurred in 2012: nine at once, followed by almost all of the foundation board members. A variety of concerns were put forth about Koko's weight gain and diet the quality of her veterinary care. Perhaps most concerning was the charge — made by more one than one person — that a psychic was responsible for aspects of Koko's care, including the large number of pills Koko was given daily. Hsu wrote:

"According to multiple former employees, these pills were recommended by Gabie Reiter, a woman who calls herself a 'certified naturopath and medical intuitive,' who consulted with Patterson on the phone... '[Patterson] would be on the phone with [Reiter] almost daily, and Penny would use her for the medical and emotional needs for the gorillas,' [former Gorilla Foundation caregiver John] Safkow says, adding that Reiter 'would make adjustments to her homeopathic medication, all without any scientific or veterinary diagnoses recommending that treatment.' The caption for a 2005 photo on Koko's website describes her as having the option of taking certain homeopathic cures when she asks for them.

If the BBC asked Patterson about these charges, the answers never made it to the screen.

I could revisit some of my own skeptical questions as well. Could Koko possibly have understood the choices offered to her both verbally and via diagrams in regards to her "family planning" wishes? What are we to make of the "climate speech" that Koko "delivered" in front of cameras last December?

When Patterson started teaching ASL signs to Koko in 1971, little was known about interspecies communication. No one thought much about the ethical costs of turning a gorilla into a sort of hybrid animal caught between a gorilla world and a human one. Patterson's research project took on a snowballing life of its own, fueled by her own love for Koko and also by increasing media attention.

Now there's no other life that would suit Koko. She lives in a small circumscribed world of dialogues and games with caregivers, play with dolls, decorated cakes on her birthday — and her own credit card (no explanation is offered in the film for how Koko uses a credit card).

Koko had been given to Patterson on loan from the San Francisco Zoo. In 1977, the zoo decided it wanted Koko back. Eventually, a deal was worked out so that Koko could be purchased for $12,500, contingent on her being bred with a male (this turned out to be Michael, and the mating didn't work out). Reflecting on the zoo's callous attitude toward separating Koko and Patterson, former Stanford student Dale Djerassi says in the film: "How can you possibly treat Koko the same way you would just treat any gorilla in any zoo?"

But Koko isn't our only window into gorilla consciousness. Wild gorillas have been seen seeking out and dismantling poachers' snares in the forest. All gorillas — free-ranging in Africa, confined to zoos, living in a trailer in Woodside, Calif. — are smart apes who feel emotions.

If only our species was better at just letting gorillas — and their natural habitat — just be.

An earlier version of this post misspelled Slate writer Jane Hu's name. It has been corrected here.