Accessibility links
When Science Stands Up To Creationism : 13.7: Cosmos And Culture Creationists and scientists alike responded in droves to a commentary by Barbara J. King that stated there's no controversy about teaching evolution. The author takes a look at the heat and the light. 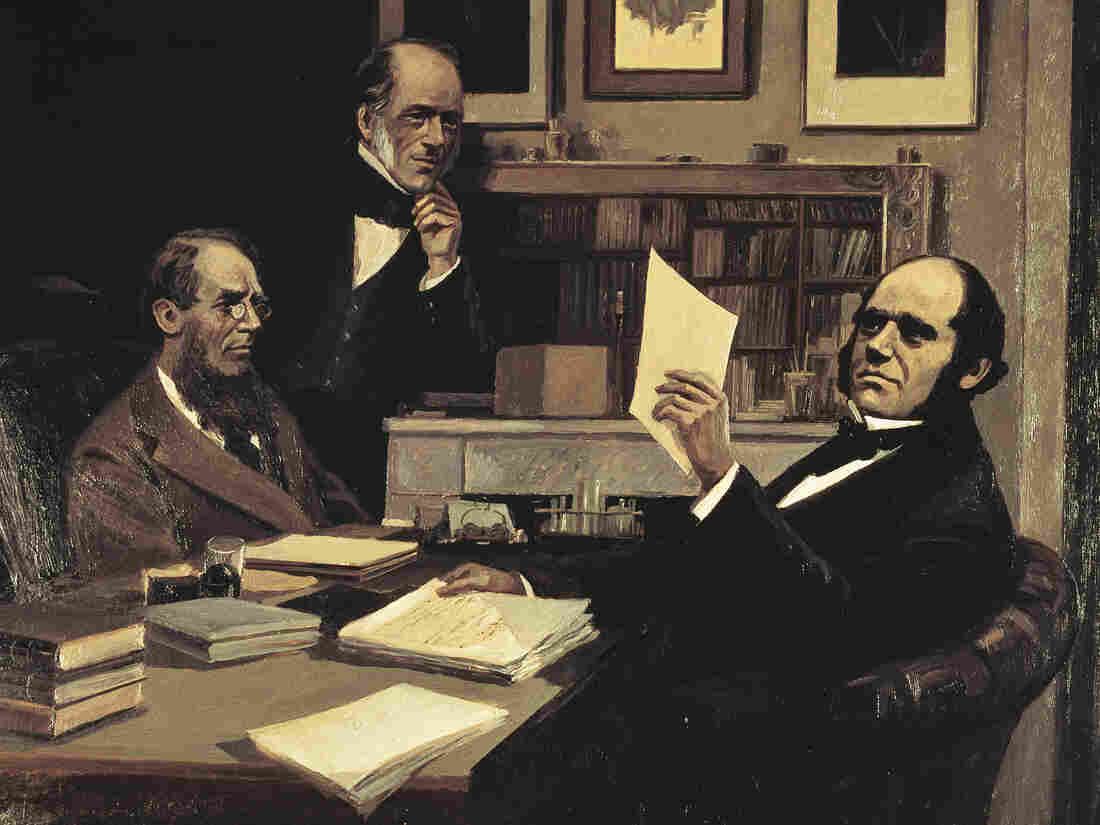 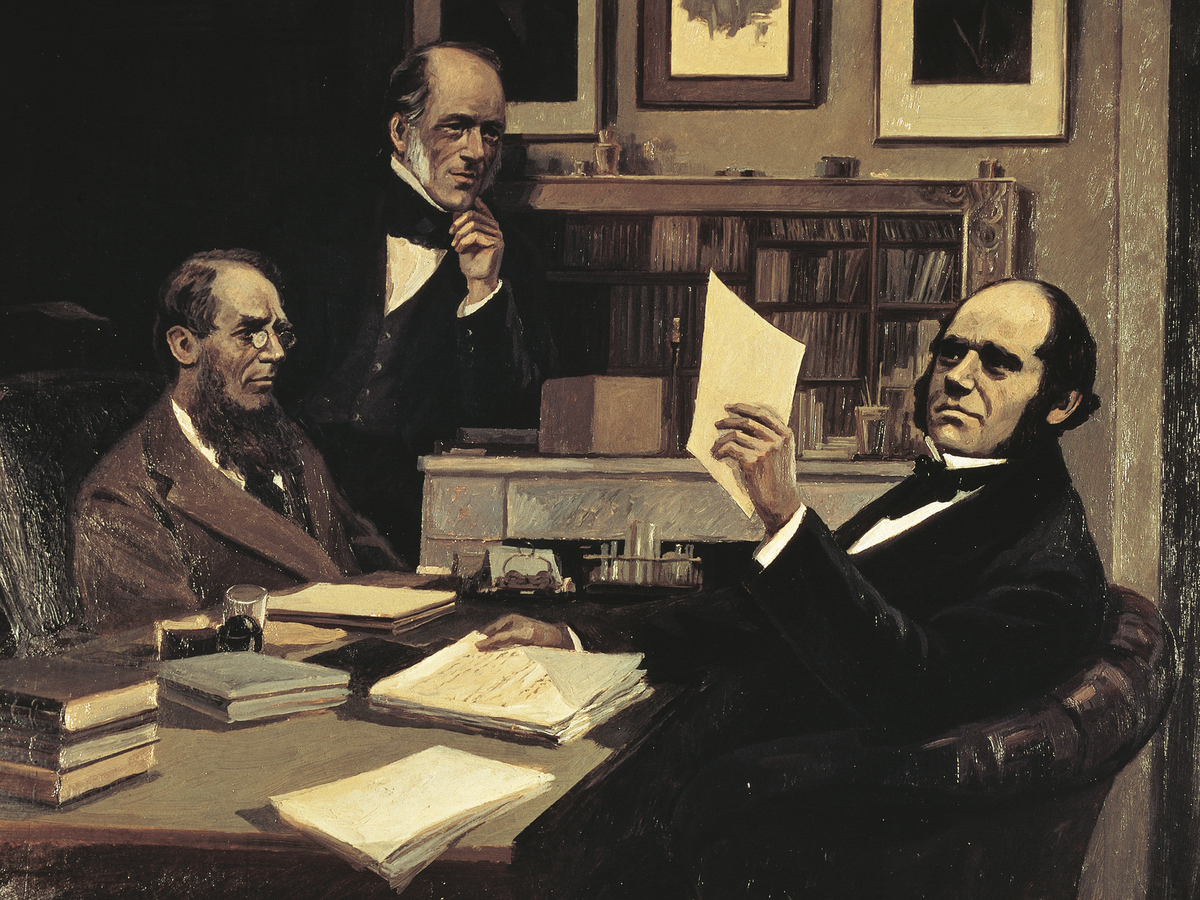 The naturalist Charles Robert Darwin, the geologist Charles Lyell and the botanist Joseph Dalton Hooker are depicted in this 19th century painting.

Overwhelming hard data from biology, geology and anthropology — gathered with a firm grasp of the workings of evolution — prove false the claims made by creationists.

Earth is not 6,000 years old and it wasn't shaped by a great flood 4,500 years ago. (Earth is 4.5 billion years old.) Humans and dinosaurs did not coexist. (These life forms missed each other by many millions of years.)

When creationist claims are put forth as science in museums or taught as science in schools, our children lose out because their science literacy is diminished.

That was the take-home message of There's No Controversy: Let's Stop Failing Our Children On Evolution, a post I wrote two weeks ago. Sparked by the opening of a creationist attraction called Ark Encounter in Kentucky, I offered suggestions for how to stand up against young-Earth creationism that is paraded as science.

My piece, I thought, was timely, because Ark Encounter has been much in the news. It turned out to be more than that, though: More than a quarter-million people have viewed the post — and I'm still in the middle of the fallout.

With more than 4,100 entries in the comment section plus hundreds more responses on Facebook and Twitter, and private email messages arriving at my inbox, too, I haven't attempted to categorize the responses in any formal way. More than a few were startling, like the warning that came to me via email that because I was supporting "programming children" in my views on evolution, God "will have to allow you to go to a particularly brutal place (yes there are levels of torment in hell), and you will consciously have eternal regret."

But there was also genuine concern that evolutionary scientists, including me, advocate forcing children to learn one way and one way only. In response after response, the idea was put forth that all views about how and when life appeared on Earth should be taught so kids can make up their own minds.

A person named John Ellis wrote a piece for PJ Media called NPR Writer Having A Meltdown Because YOUR Children Might Learn About Noah's Ark. Ellis suggested I had succumbed to scientism, and that I had "demanded an obeisance from parents and the complete sacrifice of their children to the god of contemporary science." Ellis's concluding passage was this:

"Barbara King and her ilk, however, are not actually concerned with guarding the scientific purity of our children. Their real objective is to require that their worldview be privileged over competing worldviews."

One email correspondent told me he was "grieved" by my post, then picked up a theme similar to Ellis':

"It is imperative, for the sake of the next generation, that we teach our children true science (healthy, open minded, critical thinking) not the idol of science before which our youth are told to bow down, which is bankrupt and found wanting. Brainwashing our offspring to accept whatever they get fed in their schools is only harming them, and not allowing them to think for themselves."

"Shouldn't we leave people to decide what they believe? Our nation is too large and too diverse to have a nice black and white, right vs wrong answer to group everyone into. It was a nation founded upon religious freedom. Freedom to believe, freedom not to believe. We're all losing sight of that and creationism vs evolution isn't the only place."

So in response to these remarks and others like them, let me say it loud and clear:

Freedom to believe anything one wants in the religious sphere is incredibly important. I'll have no part of scientists' religion-bashing. People who celebrate a 6,000-year-old Earth and the sweeping effects of a "great flood" on Earth and its inhabitants in church have as much right to do that as any of us have to espouse our particular brand of religiosity — or of agnosticism or atheism.

In my Ark Encounter post, my point is different: When it comes to science, we shouldn't let our children believe anything they want. Science isn't about belief.

Children need to be taught the facts from geology, biology, anthropology and other sciences, how those facts were determined, and how those facts will be refined with new knowledge over time. Ark Encounter, its sister attraction the Creation Museum, and their creationist supporters push religion as science; they claim that evolutionary "theory" means the science is wishy-washy on facts, which is a major misunderstanding of what theory means in science; they push false information as fact. None of that is OK.

By definition, science isn't about brainwashing. It's about testing hypotheses, and always seeking out both alternative explanations and data-driven corrections to previous conclusions. A person called JLB9401 conveyed this beautifully in a comment on my Ark Encounter post, where he made an analogy between the scientific process and the process of map-making:

"Earlier maps might still be useful, if you realize their limitations and use them appropriately — but newer maps, even though the differences are slight, are better at describing 'what is there'.

"Science is the process of learning what is where in the world of knowledge; and we are constantly developing better tools to make better measurements. We are constantly re-drawing the stuff that we suspect might be out there, slowly getting closer and closer to getting the stuff beyond the boundaries of knowledge successfully mapped out, and firmly within the boundaries of what we know. This means there will be a new frontier, and new questions, and maybe some corrections along the way."

Evolutionary scientists contacted me privately, too. I was sent a new edited volume, The Grand Canyon: Monument to an Ancient Earth that's billed as "a Bible-friendly challenge to young earth creationism." The authors, all scientists, collectively take on a question laid out in the book's subtitle Can Noah's Flood Explain the Grand Canyon? The answer they give is a firm "no." In a collective statement at the end of the book, the authors write: "The flood geology claim of being 'as good as' the prevailing scientific view is hollow."

This book's approach — rooted in the intersection of science and Christianity — is not my approach. But it is an approach consistent with scientific literacy.

And that's a goal for our kids I won't back away from.