Accessibility links
A Look At Accuracy And Turner's Whaling Quartet : 13.7: Cosmos And Culture Turner's whaling paintings, recently on display at the Met, do little to convey the detail of the whale's powerful movement or the seas — but what they do create is atmosphere, says Alva Noë. 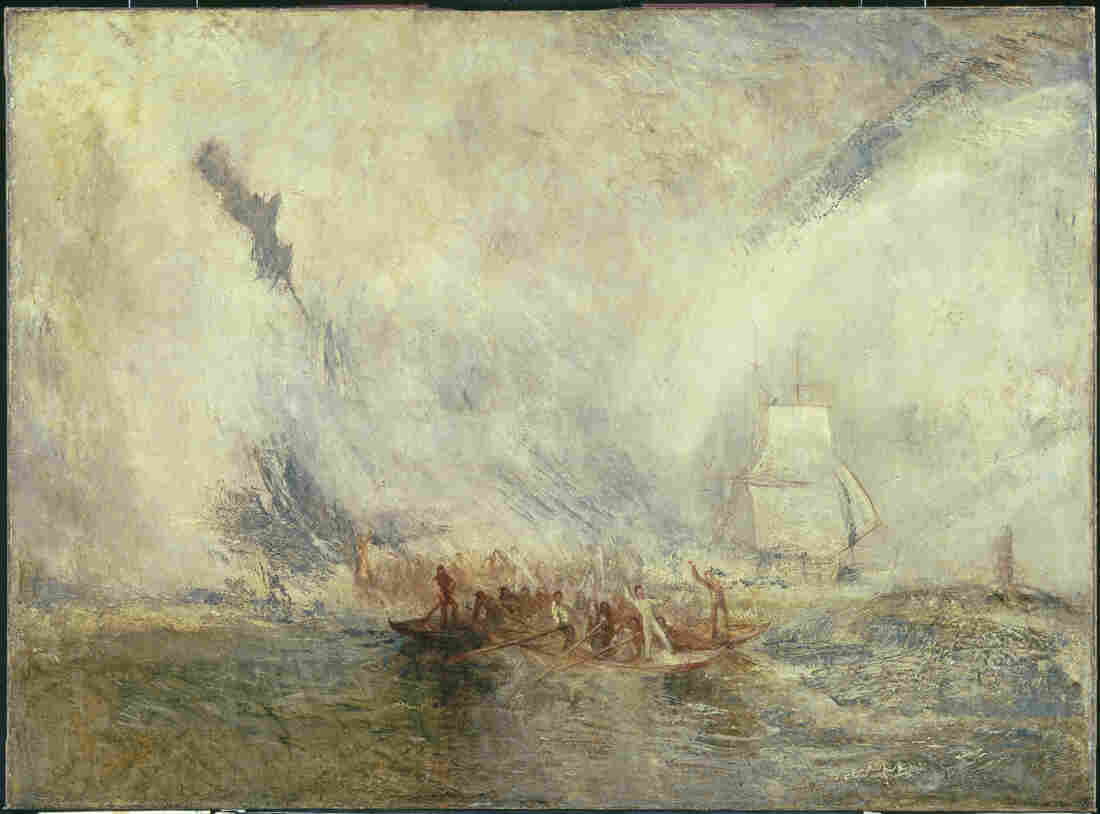 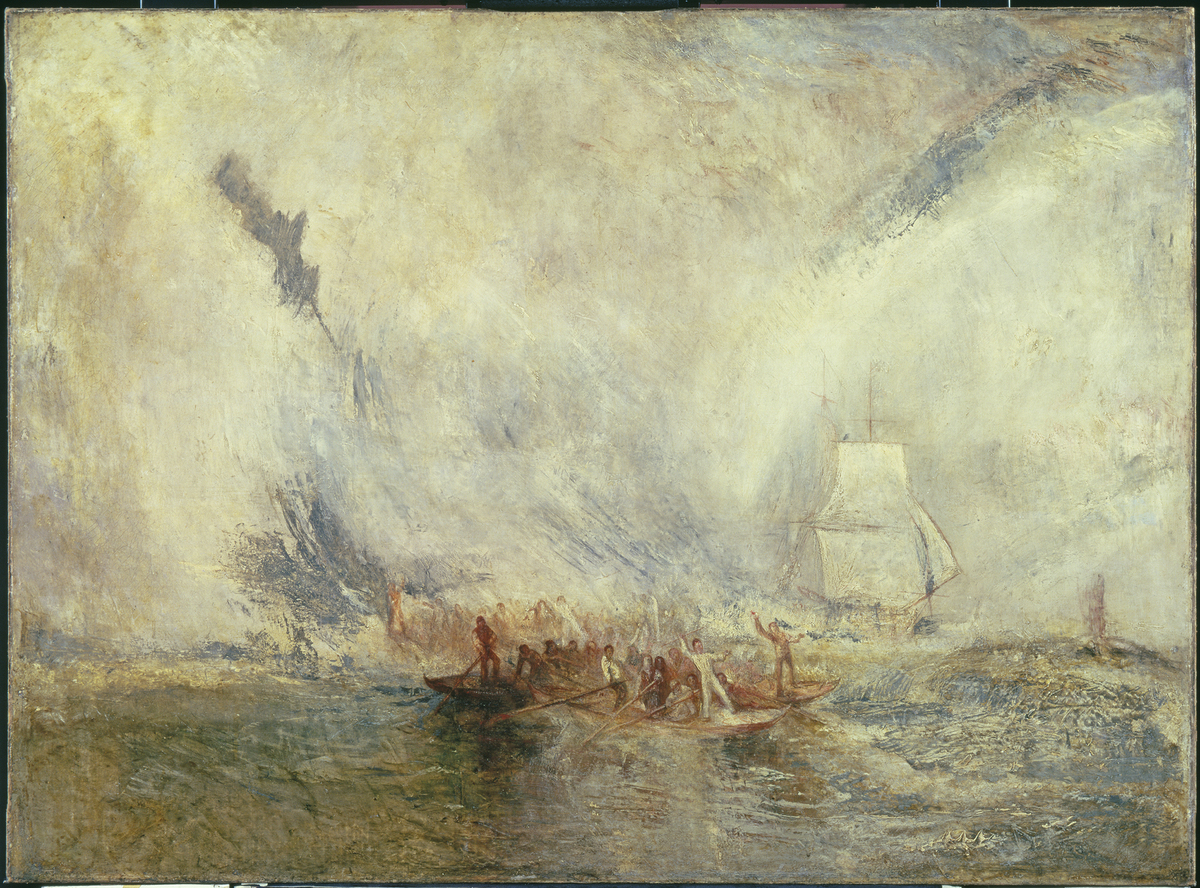 According to Oscar Wilde, life imitates art. In his The Decay of Lying — An Observation (1891), he wrote:

"Where, if not from the Impressionists, do we get those wonderful brown fogs that come creeping down our streets, blurring the gas-lamps and changing the houses into monstrous shadows? To whom, if not to them and their master, do we owe the lovely silver mists that brood over our river, and turn to faint forms of fading grace curved bridge and swaying barge?"

He might have had a painter like Joseph Mallord William Turner in mind when he wrote these words. Turner's famous paintings of ships at sea do not merely illustrate their motif, but in their atmospheric and spacious qualities they can almost be said to have created it.

But what of his famous quartet of whaling paintings, which were recently on display together in New York City at the Metropolitan Museum of Art? Whaling is a beguiling subject. On the one hand, back in the 1840s when Turner made these paintings, whaling was a hugely important industry. Oil harvested from the fat of the animal was big business and the bones were used for everything from corsets to umbrellas. Whaling touched the lives of everyone.

But on the other hand, it was a big business whose work took place not in local factories — but far from public view in the most remote places in the world, out in the middle of the ocean. Whaling touched everyone but it was a rare person, indeed, who would have set eyes on a whale, let alone witnessed the hunt. So it isn't surprising that, according to text from the exhibit at the Met:

"Whales, and particularly sperm whales, were quasi-mythological creatures. Most people had never seen one of the animals, and existing images and descriptions, even scientific ones, were generally inaccurate."

Turner himself never went whaling and may never have seen a whale in the flesh. Which may explain their near total lack of legible detail. To read the wall text, the pictures document the parts of the whaling work — the whale is hauled along side, its blubber cut away and the oil extracted using heat and then packed away in barrels, etc. Perhaps an intelligent and well-informed viewer of these paintings can find traces of these doings notated within. But not this viewer. As far as I could tell, the images were devoid of available detail and of little documentary value.

Nor did they succeed, I would venture, even in capturing anything like the physical reality of the whaling experience. These paintings do little to convey the whale's powerful movement, or that of the ever shifting and terrifying seas themselves; harpoon wielding men seem rigid and stick-figure-like. The vantage point taken up in these paintings, it seems to me, is resolutely optical. We encounter no action, only action's image; what we are given are stills.

One of the exhibition's preoccupations is whether Herman Melville saw these paintings and was influenced by them when he wrote Moby Dick. We know Melville knew about them; he refers to them. But it is unknown whether he saw them.

Whether Melville saw Turner's whaling paintings or not, I find it implausible that they would have influenced his treatment of whaling in Moby Dick. And this is because, when all is said and done, these paintings of Turner's don't really have much to do with whaling. Whaling is confined to the captions. And Melville had been a whaler. It's hard to see how a fantasy of the whale hunt by a painter who, it is thought, had never even seen a whale — or the hunt — could have made that big an impression, whatever Oscar Wilde may have thought to the contrary. Is an astronaut likely to be that impressed by a Hollywood space flick?

I don't intend to any of this to be a criticism of Turner. Far from it.

Turner was no documentarian. The true reality that interests him in these paintings is not so much the economic labors vaguely adumbrated in the lower portions of the canvasses, but rather the luminous palisades of cloud, mist, sun and space that tower thickly above.

In a way, these aren't pictures of anything, and the question of imitation — art-life? life-art? — is bypassed. They are autonomous creations of disassociated atmosphere in paint.

Alva Noë is a philosopher at the University of California, Berkeley where he writes and teaches about perception, consciousness and art. He is the author of several books, including his latest, Strange Tools: Art and Human Nature (Farrar Straus and Giroux, 2015). You can keep up with more of what Alva is thinking on Facebook and on Twitter: @alvanoe