Accessibility links
How We Love Our Pigs: Local Food And Animal Ethics : 13.7: Cosmos And Culture What makes for "authentic" barbecue and bacon? Barbara J. King looks at the anthropology — and the ethics — of pastured pigs. 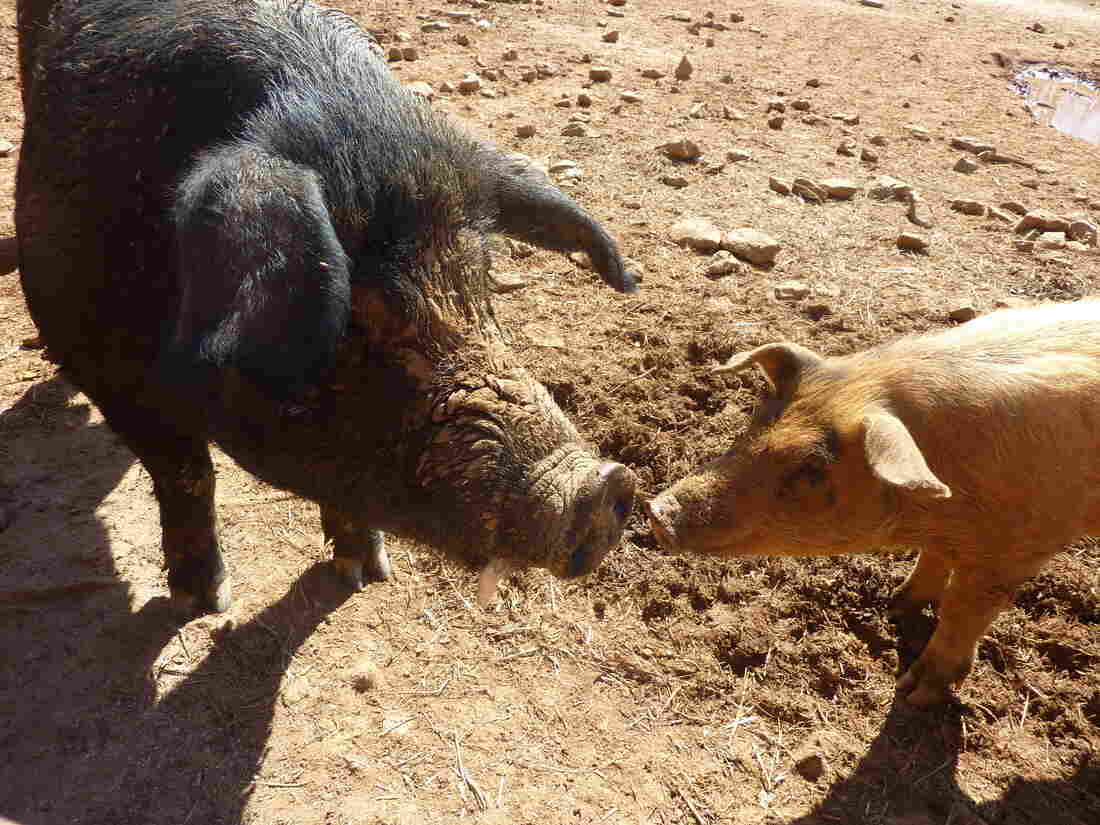 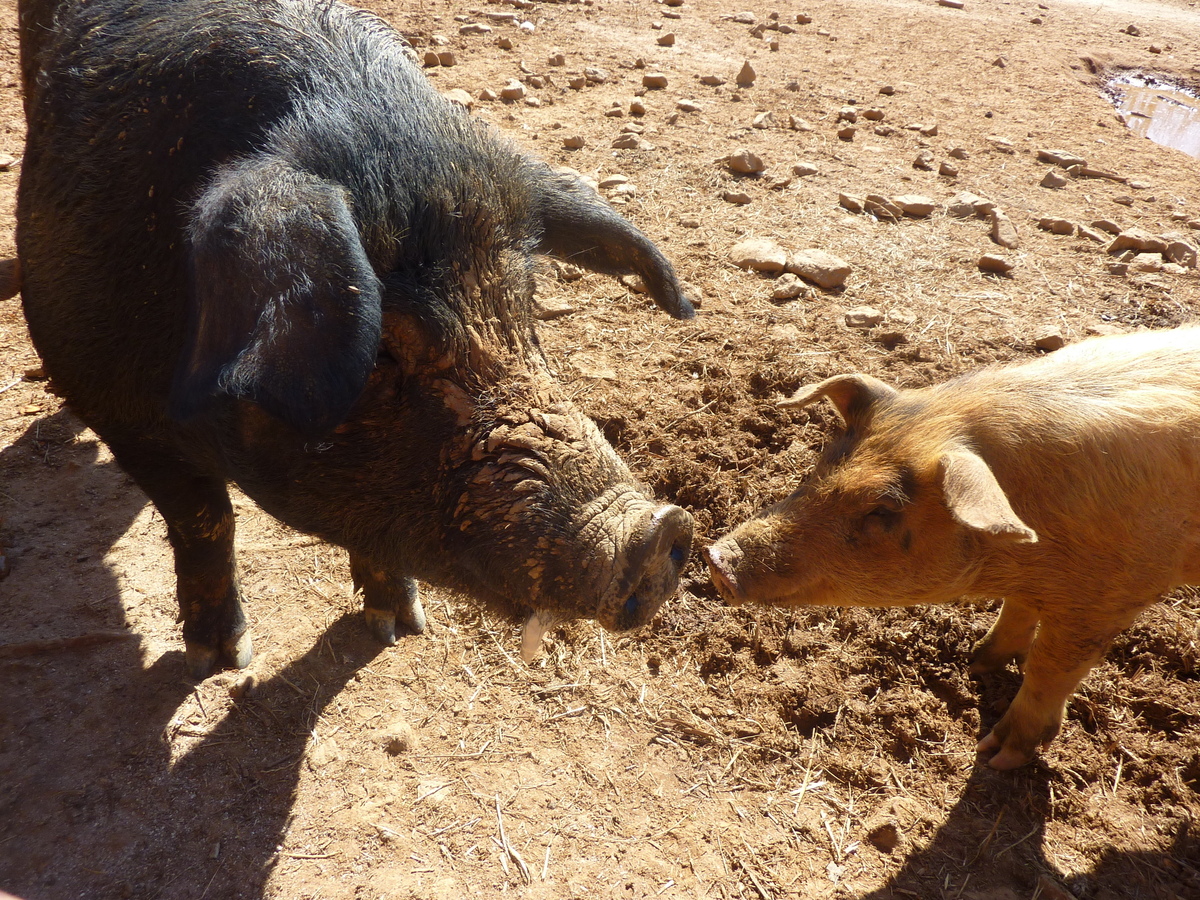 People, I have noticed, get very excited about eating pigs and pig products. Bacon mania has been going for a while now, and the well-established cult of barbecue continues as strong as ever.

At the same time, the local-food movement includes the idea that it's ethical and healthy to pay attention to where and how animals are raised for slaughter.

In his new book based on years of field work, Real Pigs: Shifting Values in the Field of Local Pork, College of William and Mary anthropologist Brad Weiss brings together pigs and place, specifically pastured pigs and the network of farmers, food-sellers, chefs and consumers in the Piedmont region of North Carolina.

Weiss and I have been colleagues and friends for more than 20 years. His interest in food and animals comes from cultural anthropology; mine from an evolutionary and animal-activism perspective. He prepares and eats pork with boundless enthusiasm; I don't eat pigs at all. Who better to talk with, then, for my second in a series of monthly conversations based in ideas both shared and divergent?

Last week, over email, Weiss and I discussed many things pig. I've edited our conversation for length.

Let's start with place. You describe North Carolina as a state "thoroughly transformed by the dislocations wrought by industrial pork production." In what sense are small farmers in North Carolina today consciously working against CAFOs (large enterprises where animals are raised in confined situations) and factory farms?

There is no doubt that some small farmers in North Carolina today are explicitly opposed to CAFOs and contract farming. They describe their work in this way — and told me, and their customers, this explicitly. Some of them even had experience with industrial production, hated it, and sought an alternative. At the same time, I don't want to suggest that this is typical, or even all that widespread. Most frequently, farmers are not consciously engaged in a political act. Most are either trying to eke out a living on a family farm, or adding pigs to enhance their agricultural yields.

Your project in North Carolina's Piedmont region was ethnographic; you worked at Cane Creek Farm and other farms, at the Carrboro Farmers' Market, and in restaurants. Your immersion in these food networks is fascinating in the telling; to me, it comes across as not just intellectually satisfying anthropology in the field but almost — at least at times — joyful. True? What was it like to work directly with pasture-raised pigs as well as with the pork products they became?

Hey, "intellectually satisfying anthropology" IS joyful!! Really! But, yes, there were moments, especially as I began this work, when I found myself completely taken by the working landscapes and the animals I was helping to raise. I felt this most clearly when I found myself utterly in the moment, and really losing my sense of "working" or having some ultimate purpose I was trying to achieve. At the same time, I have felt an honest thrill, quite different but no less real, in working with the many, many people I met at the Carrboro market. I thoroughly enjoyed seeing the same customers week after week and having them tell me I gave them a fantastic recipe for pork belly, or shanks. That was genuinely rewarding, too.

So, what are real pigs, in the context of local food movements and the quest for authenticity in our food?

I approach this question in an ethnographic way. What I mean by that is I'm really interested in how and why various communities of farmers, chefs, customers, etc., use terms like "real" or "authentic," and in what these terms do. For people who are interested in "real pigs" it has something to do with both the pigs themselves — the fact that these animals have characteristics that distinguish them from industrially produced pigs — but probably even more to do with the methods by which they are raised. That is, in the outdoors, reproducing under their own terms (e.g., building nests), and with a concern for their welfare as living creatures. Somehow, this makes the pork that derives from this human-porcine encounter more "real."

You write beautifully about the political economy and cultural networks in which pigs are enmeshed — and on Facebook share, with your friends, pictures of pork dishes you eat and/or create. I write about the idea that pigs should be seen as individuals we shouldn't so readily turn into sausages and bacon — even if they get to live their lives on small farms first. I've also said that small farmers and animal activists could all benefit from more shared dialogue. How do you see our areas of overlap — and of divergence?

I think the critical language in your question here is "so readily." That is, I think there can be a very wide agreement that a concern for animal welfare means thinking consciously and carefully about the implications of eating meat and, of course, of the lives of animals. If you do eat meat, try to have an understanding of where that meat comes from in the broadest sense — what does it take to bring that product to your kitchen?

I think a very wide range of people — livestock farmers, omnivores, even vegans (I know, because some of them have become market customers!) — can agree that articulating a commitment to being conscientious — being a conscious eater — will contribute to people eating, perhaps less meat, but meat that comes from animals raised in ways that recognize the interests and activities of the animals, too. If you simply think that no one should ever take the life of a pig in order to eat it, well, then that's a pretty broad divergence. I feel it is actually imperative to support livestock producers committed to animal welfare in the current social and political world we inhabit — but all of them do entail at least acknowledging that people are not about to stop eating meat in large numbers.

Vegans who begin to eat pastured pork! That phrase got my attention. To employ a fierce understatement, the vegans, vegetarians and pescatarians I know personally would be unlikely to do that. And yes, more people will indeed, I think, eat less meat over time, because we care increasingly about animal welfare, the environment and our own health (and because there's a big future in cultured meat).

But Weiss is right, of course: People are not about to stop eating meat in large numbers.

In a very real sense, given the popularity of pigs and other animals as food, we're all of us — right across the food continuum from pork fans to vegans — enmeshed in a "meat-hooked" culture. In anthropologists' lingo: "All food-related activities are modes of cultural practice," as Weiss puts it in his book.

Real pigs are caught up in that food culture, right alongside us.