Accessibility links
Can Science Crack The 'Hardest' Question? : 13.7: Cosmos And Culture Where did the world come from? Unless future physicists make new observations from the Big Bang, it's hard to contemplate any science coming from the first originating event, says Marcelo Gleiser.

Can Science Crack The 'Hardest' Question?

Can Science Crack The 'Hardest' Question? 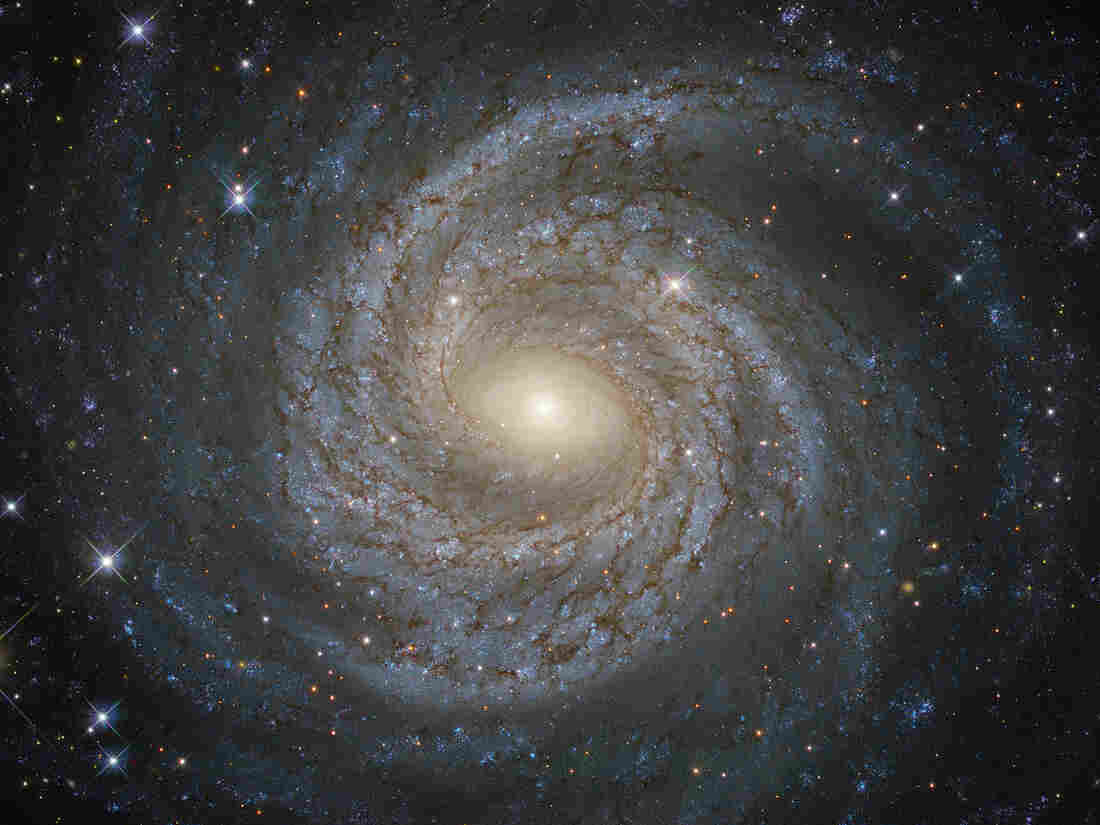 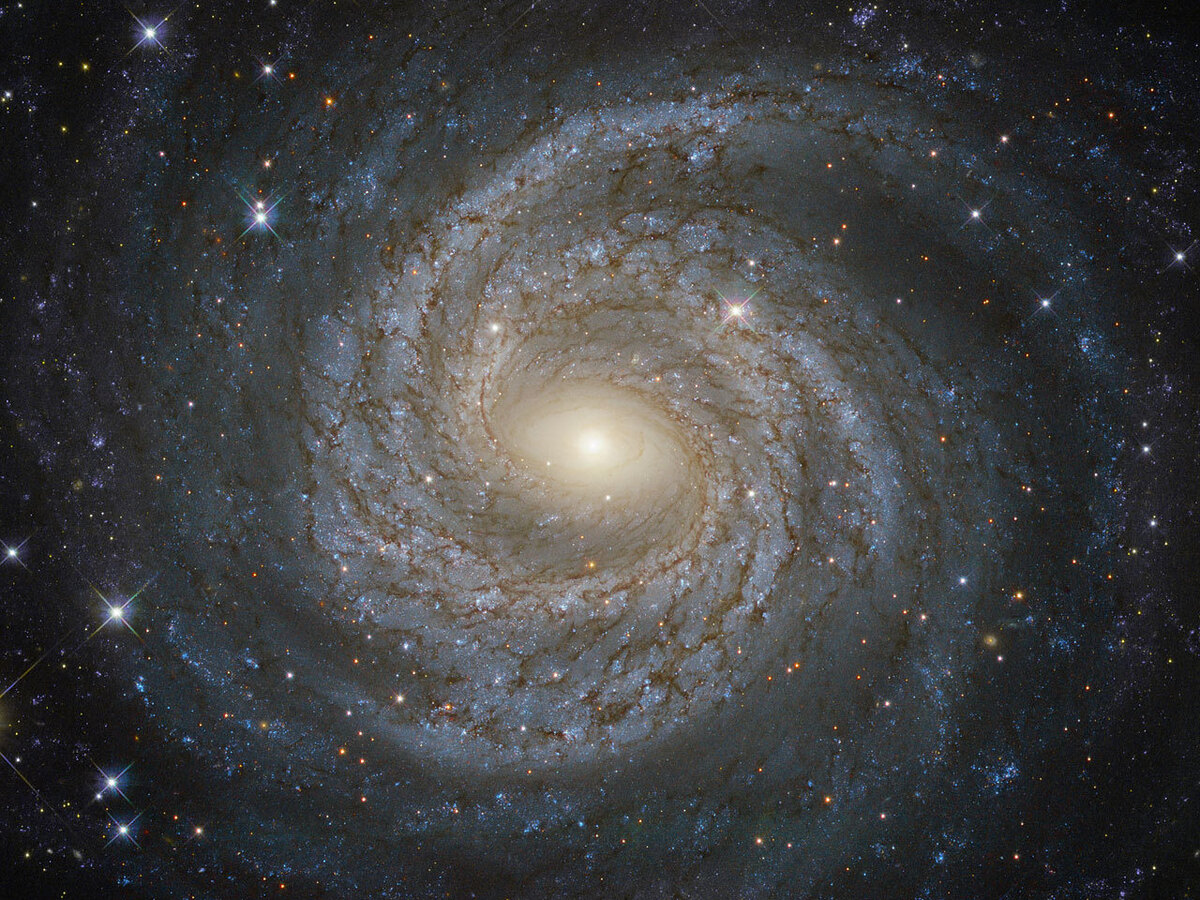 Spiral galaxy NGC 6814, whose luminous nucleus and spectacular sweeping arms, rippled with an intricate pattern of dark dust, are captured by the Hubble Space Telescope.

Opinions may diverge initially — but once we start to think about it, no question is harder than figuring out the origin of everything.

The more popular phrasings go something like, "Where did the world come from?" or "Why is there something rather than nothing?" This is the question of creation, of how the universe and everything in it came to be. And, although we've made great progress towards understanding the universe and its history, we are still far from understanding its origin.

In fact, the question is so hard that some consider it to be unanswerable, at least scientifically. We know that many religions have narratives of creation, describing how the world and its inhabitants came into being, usually from the action of a God or many gods. (A few even explain it without any divine intervention.) But since science is not about using explanations that operate outside nature's laws, the question remains a tantalizing one. What can science say about the origin of everything?

It turns out that science can say a lot. First, we know that the whole issue of cosmic origins arises because the universe does have a history: It emerged at about 13.8 billion years ago and has been expanding ever since. We know this from looking at clues from ancient times, events that left an imprint in the universe, like childhood scars. Just as old scars are a memory of what happened in our early life, these events are memories of the universe's childhood.

The expansion itself we see as galaxies move away from one another, stretching their light into longer wavelengths, what is called a redshift. We then can use the prevalent model of cosmology, the Big Bang model, to compute the amounts of the lightest chemical elements in nature and compare the calculations to observations. The excellent agreement tells us that the model is describing well what was going on when the universe was very young, about one second after the Big Bang. Finally, there is the cosmic microwave background radiation (CMB), a fancy name that describes the radiation left over when the first hydrogen atoms were made, at about 380,000 years after the Big Bang. The CMB is a spectacular relic from the young universe, providing all sorts of clues about how galaxies and more complex structures formed afterwards, as well as imprints from earlier events.

These three observational pillars give scientists enormous confidence that the universe does indeed have a history, one that started 13.8 billion years ago. But they don't tell us much about the beginning of everything. Since science is about making sense of nature with observational and experimental information, the question then becomes whether there is any kind of cosmic scar that can provide information about the universe's own birth.

In March 2014, a group of scientists reported finding distortions on the CMB created by gravitational waves, ripples in the very fabric of space (and time). After Einstein had shown that gravity can be related to the bending of space by the presence of mass, it became clear that any large gathering of matter that is moving in certain ways can alter the geometry of space, causing ripples that propagate at the speed of light. The excitement from these particular ripples is that they were presumably caused by events related directly to the Big Bang itself. Unfortunately, this first hope of a signal from the Big Bang was dashed a few months later, when more precise data became available. The observed distortions in the CMB were caused by much less glamorous interstellar dust.

But this doesn't mean that gravitational waves couldn't capture the very early moments of cosmic existence.

We now have concrete evidence that gravitational waves do exist, as recently detected by teams of scientists working for the Advanced LIGO experiment (Laser Interferometer Gravitational Wave Observatory) announced in February this year. The detection was due to the collision of two huge black holes, certainly a very dramatic event.

Could the creation of the universe itself produce an observable signal in gravitational waves?

For that we would need different detectors from LIGO, more sensitive to shorter wavelengths. The signals would not be coming from the Big Bang itself, but from an event called cosmic inflation, believed to be an ultrafast period of spatial expansion (think very fast growing balloon) just after the origin of the universe itself. The basic signature of such waves is that they have what's called a flat spectrum, that is, waves of different wavelengths having the same power (or a power that decreases with wavelength.) (Here is a technical article on this topic). Detection wouldn't be easy, but still possible.

Still, would such a detection, if successful, tell us something about the Big Bang itself? Given current theories, the answer is a tentative yes. If inflation happened, it would have been very closely related to the origin of the universe itself. In the unfolding cosmic history of 13.8 billion years, the two would be separated by a minuscule fraction of a second. Confirming inflation, either by this flat spectrum or by the distortions in the CMB, would mean confirming much that we know about the universe.

But that's where the scientific narrative would probably end. Unless future physicists come up with new observations directly from the Big Bang itself, it's hard to contemplate any science coming from the first originating event. Science needs a conceptual framework, things like space, time, energy, fields, to be able to function. Observations happen when matter that undergoes transformations creates a detectable signal.

The Big Bang itself, if we think of it as a transition into measurable space and time, may be a hard one to pin down as an observation. It may remain, for practical purposes, a very useful conceptual framework to describe with the tools of science the ensuing history of what comes after it.

Marcelo Gleiser is a theoretical physicist and cosmologist — and a professor of natural philosophy, physics and astronomy at Dartmouth College. He is the co-founder of 13.7 and an active promoter of science to the general public. His latest book is The Simple Beauty of the Unexpected: A Natural Philosopher's Quest for Trout and the Meaning of Everything. You can keep up with Marcelo on Facebook and Twitter: @mgleiser