Accessibility links
Little Progress Has Been Made Since Einstein On The Physics Of Time : 13.7: Cosmos And Culture It is plausible that in the ongoing expansion, the universe is creating not only new space but also new time — and each new moment is what we refer to as now, says guest blogger Richard Muller.

Now — And The Physics Of Time

Now — And The Physics Of Time 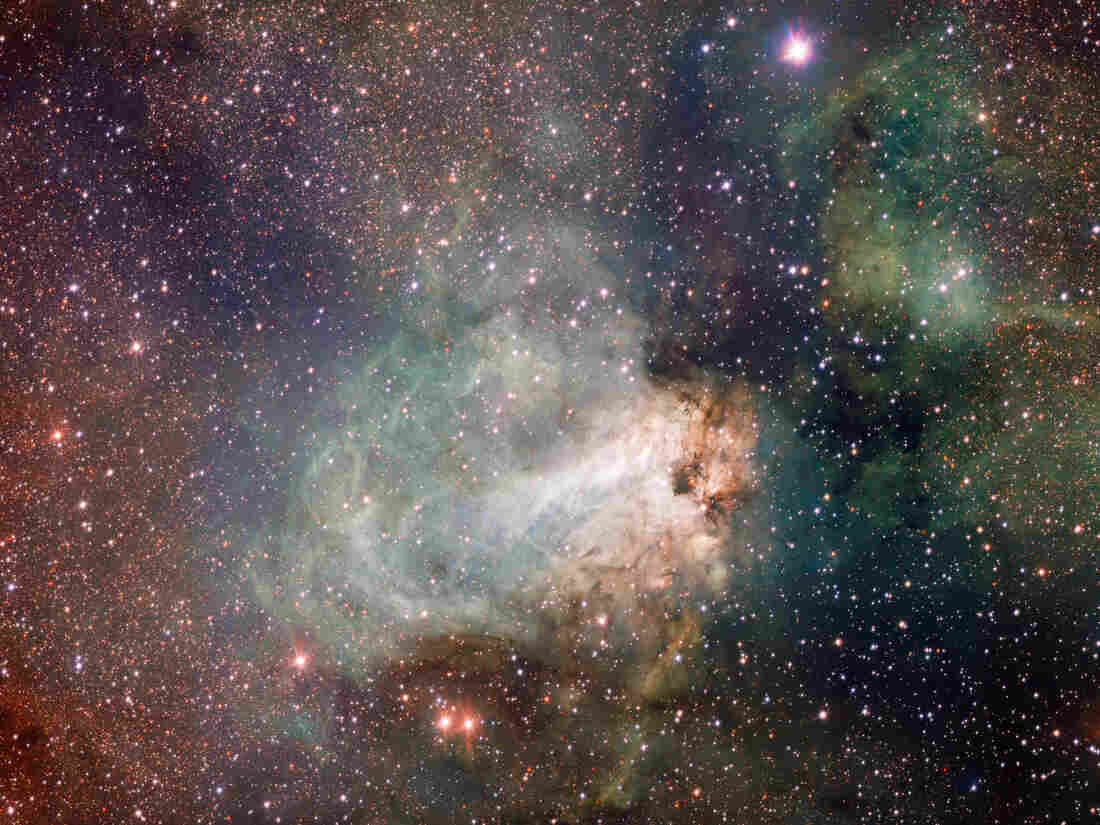 The star-forming area Messier 17, also known as the Omega Nebula or the Swan Nebula, is a vast region of gas, dust and hot young stars that lies in the heart of the Milky Way in the constellation of Sagittarius. ESO/INAF-VST/OmegaCAM hide caption 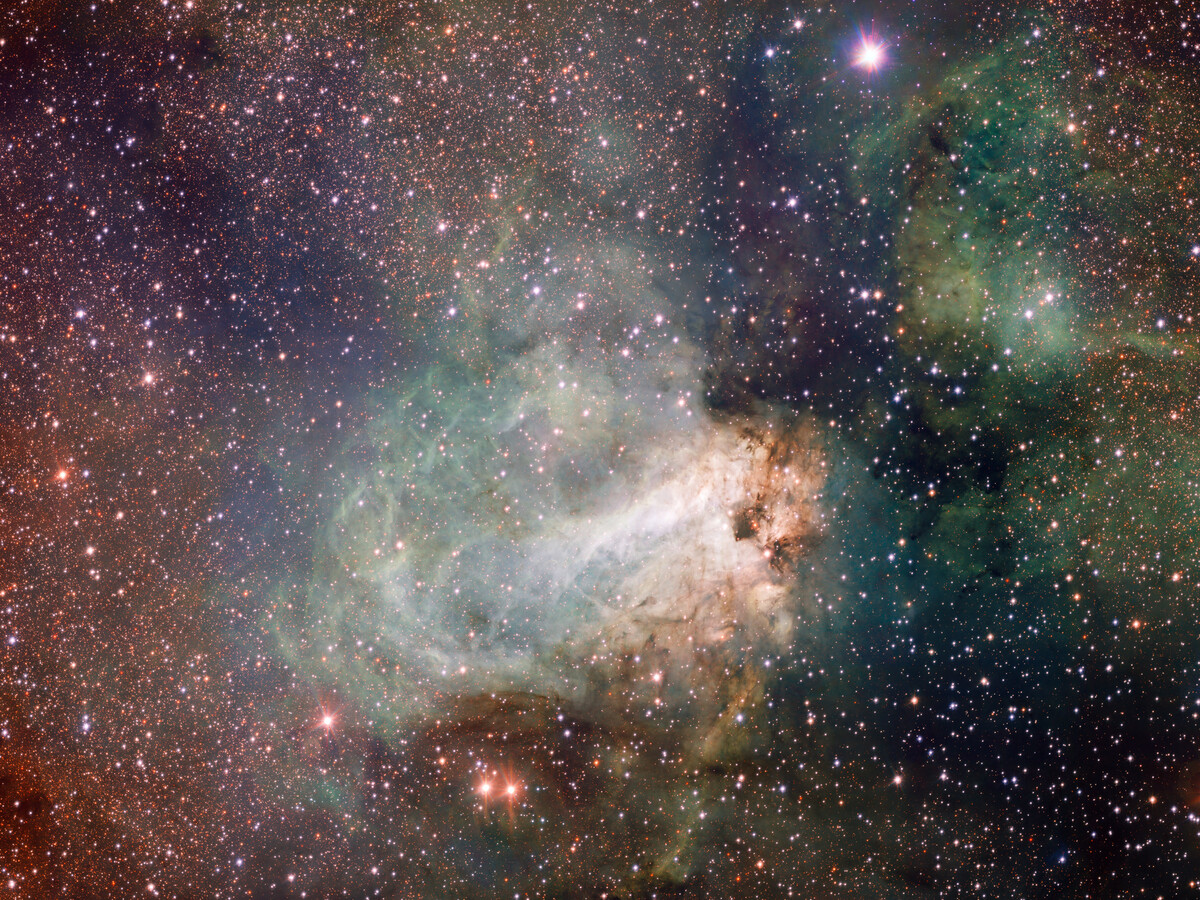 The star-forming area Messier 17, also known as the Omega Nebula or the Swan Nebula, is a vast region of gas, dust and hot young stars that lies in the heart of the Milky Way in the constellation of Sagittarius.

Time is elusive and enigmatic. The moment now is ephemeral.

Quandaries and confusion about time date back as far as Aristotle and Augustine, and as recently as Einstein and Feynman.

Physicists understand much about time, how its flow varies depending on velocity and gravity, but they haven't reached any consensus on why it flows at all. If time is simply the fourth dimension, why can we stand still in space but not in time? Progress in this field has been so slow that most scientists simply ignore the question.

Consider the following remarkable statement: You are reading the word "now" right now. I make that statement, despite the fact that I could have no prior knowledge of when you were going to read it. The very concept of the ephemeral now is illusive. Aristotle devoted pages to the subject but became entangled in his own words. Augustine (in the fourth century) wrote, "What is time? If no one asks me, I know; if I wish to explain, I do not know. ... My soul yearns to know this most entangled enigma."

Until the 20th century, time was merely the stage on which the laws of physics were performed. Only in the 20th century did Albert Einstein show that we could study the stage itself. He showed that even though he couldn't explain the flow of time, he could derive rules about that flow. He showed that time moves slower in a moving object and that, thanks to gravity, time flows faster upstairs than it does downstairs (a huge effect for GPS satellites). By bringing time into the realm of science, Einstein gave physics the gift of time.

Yet even the great Einstein despaired of understanding the flow of time and the meaning of now. Einstein's quandary was described by Rudolf Carnap:

"Einstein said the problem of the Now worried him seriously. He explained that the experience of the Now means something special for man, something essentially different from the past and the future, but that this important difference does not and cannot occur within physics. That this experience cannot be grasped by science seemed to him a matter of painful but inevitable resignation. So he concluded 'that there is something essential about the Now which is just outside the realm of science.' "

We've made little progress since Einstein — until now. Some theorists, in their frustration, revert to Augustine's deduction: that the flow of time is an illusion. Although this conclusion doesn't fall within the realm of science (how could you falsify it?), it provides a convenient excuse for ignoring the most salient aspects of time, the flow and the now, the aspects that are at the heart of human experience.

Now, in the early 21st century, it is time once again to examine the meaning of time. In the early 20th century, Einstein tried to "unify" the forces of electromagnetism and gravity, but he failed. We now understand the reason for his lack of success: His work was premature. Unification was only possible when the importance of the weak force (the cause of common radioactivity) was first unified with electromagnetism. Then the strong force (which holds the nucleus together) was unified with them. Only recently are scientists attempting to bring in gravity. Without our current knowledge of all the forces, Einstein's attempted unification was destined to fail.

In a similar way, past attempts to understand now and the flow of time were doomed by our inadequate understanding of quantum physics and cosmology. To put together a coherent picture, you must include the mysterious covert action at a distance of quantum mechanical entanglement. You need to include our modern (far, far different from the days of Einstein) understanding of the structure and expansion of the universe. You need to understand the nature of antimatter, and Feynman's fantastic conclusion that antimatter is just ordinary matter moving backward in time. What does that mean? Does it imply time travel is possible? What does that imply for our concept of "free will"?

I think that only now can we finally understand the concept of now. In cosmology, we think of the expanding universe as the continuous creation of new space; the universe continues to grow as the space between galaxies increases. That recognition makes it plausible that in the ongoing expansion, the universe is creating not only new space but also new time. Each newly created moment is what we refer to as now. Let's call this the "Now Hypothesis."

This picture may sound philosophical, but it has a solid foundation in physics, and moreover (unlike many current-day string theories) it offers an experimental test. If the creation of time and space are linked, then there should be observable consequences when we observe the collisions of black holes, as was recently reported from the LIGO observatories. In their most powerful event, reported just this past February, the combination of two massive black holes should, according to general relativity theory, have resulted in a massive amount of new space in the vicinity of the final star, amounting to millions of cubic kilometers. According to the Now Hypothesis, this event should have also created a new interval of local time, about a thousandth of a second. Alas, that is just barely too short to be observable in the observed events. But we all expect that the first LIGO event is unlikely to be the strongest; as soon as we see a similar event taking place closer to us, the improved signal strength should be sufficient to test the theory, to confirm it or disprove it.

Now is an exciting time. We are on the threshold of possibly understanding both now and the flow of time.

Richard Muller is a professor of physics at the University of California, Berkeley and the author of Now—The Physics of Time.