Accessibility links
Octopuses Are Marvels To Watch And, For Some, To Eat Alive : 13.7: Cosmos And Culture Octopus behavior has captivated scientists and animal lovers alike; now, eating these animals alive is catching on in some U.S. restaurants, says anthropologist Barbara J. King.

Octopuses Are Marvels To Watch And, For Some, To Eat Alive

Octopuses Are Marvels To Watch And, For Some, To Eat Alive 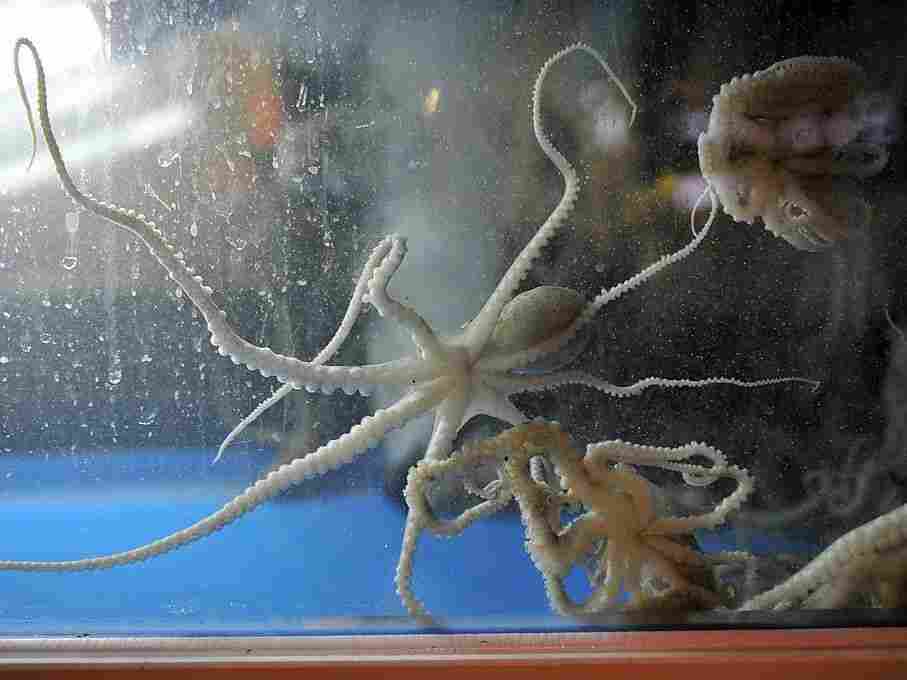 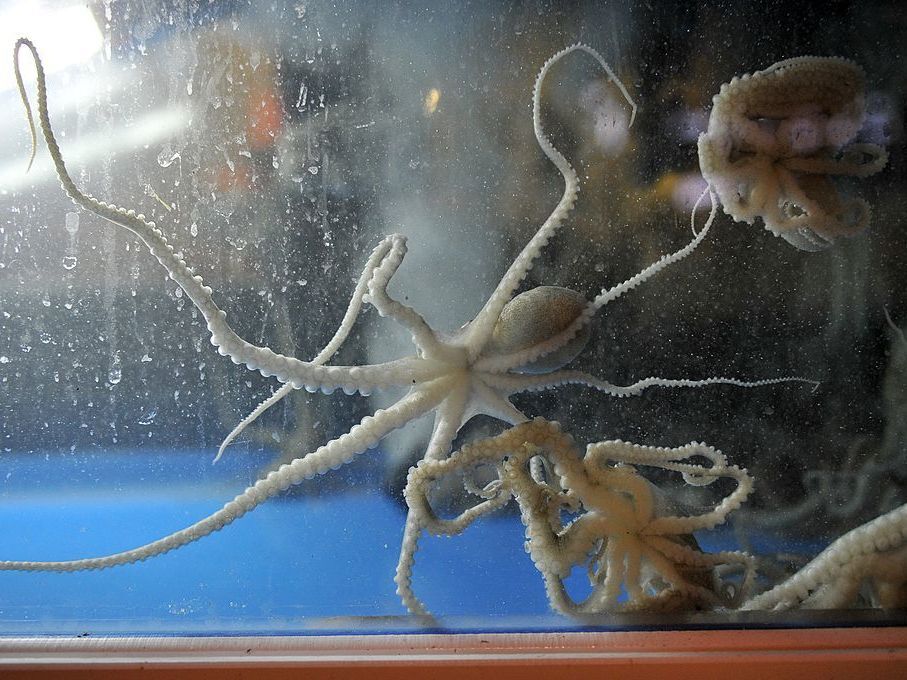 When I give public talks about animal intelligence and emotion around the U.S., I'm struck by one thing: a big audience response to the behavior of octopuses.

In the midst of conveying the most recent evidence for thinking and feeling by mammals like apes, monkeys, elephants and dolphins, I show this video clip of a veined octopus in Indonesia. Forty seconds in, the octopus tentacle-walks off across the ocean floor with a coconut shell that he or she then turns into a shelter. That tool-using in action — by an invertebrate no less! — always results in surprised gasps, and some laughter, too, as the octopus's gait is quite amusing to see.

In it, we learn that octopuses — or sometimes parts of octopuses that were severed from the body while alive — are served to diners in restaurants in California and New York.

Octopuses experience the world consciously. This is no longer controversial to conclude, as we know from 2012's Cambridge Declaration on Consciousness.

In the written material that PETA has issued to accompany the video, octopus expert Jennifer Mather makes it clear, as well, that octopuses feel pain. The octopuses that are consumed alive (whether whole or in pieces) must be suffering — whether in Korea, other Asian countries where sannakji has been a popular dish, or in the U.S.

Live octopus is most famously linked with Korean cuisine; it's not unusual for it to be available in street markets and restaurants there. It is also traditional in cuisine in other Asian countries, including Japan.

Earlier this week, I received an email in response to some questions about the practice in the U.S. (I worked with PETA in 2014-15 on a campaign involving monkeys.) Basically, I wanted to know more about the scope of the eating of live octopus — or, for that matter, other living seafood — in the U.S. Ben Williamson, PETA's senior international media director, wrote:

It appears that the vast majority of restaurants are in California, although the restaurants in New York are perhaps better known. We've identified two small restaurants in Virginia that serve live octopus, at least seasonally, and at least one more that has served live octopus in recent years.

The video footage comes from two restaurants in Los Angeles that serve live animals. At T Equals Fish, we documented that the legs of an octopus were cut off and that the tails of two live shrimp were removed and prepared sashimi-style. At the second restaurant, we saw that a live lobster, whose tail had been removed and prepared sashimi-style, was served.

We're aware of two Queens [N.Y.]-based restaurants that currently serve live animals — both are called Sik Gaek. Earlier this month we visited Sik Gaek in Woodside, where observers saw diners eating sannakji (the legs of a live octopus, the dish we filmed being prepared in Los Angeles) but we did not include footage of this in our video."

I called T Equals Fish in LA and Sik Gaek in Woodside. Workers at both restaurants confirmed that, yes, they do serve live octopus to customers. When I asked Jay Jeong, who identified himself as a worker at Sik Gaek, if he had a comment about PETA's concern regarding the octopuses feeling pain, he said, "I don't know." The woman who answered the phone at T Equals Fish declined to give her name or further comment — and later attempts to connect with Sik Gaek proved unsuccessful.

Sushi Taro in D.C. also serves live octopus. When I spoke with owner Jin Yamazaki on the phone, he told me he thinks all animals have feeling but that eating octopus this way is a long-standing cultural tradition. "We have been eating octopus for hundreds of years," he said. Yamazaki likened the practice to whale hunting and said that it isn't OK to "attack" the practices of other cultures.

The scope of live-eating of octopus in the U.S is not yet known. More examples may or may not come to light.

What is certain is that the eating of octopus, generally, is on the increase in the U.S., a trend that in itself is notable. Among the evidence for this rise that Williamson cited to me are these quoted statistics that are sourced to Seafood Trends Magazine:

"Over the last 11 years, the cephalopod [octopus] has increasingly gained acceptance, and diners can now be found eating it grilled, braised, boiled and otherwise at all manner of restaurants, according to the latest research from Datassential MenuTrends. Octopus now appears on 8 percent of restaurant menus, an increase of 6 percent since last year and nearly 80 percent compared to 11 years ago.

On the same day that the octopus news from PETA went public, 13.7's Tania Lombrozo published a post in which she embraced an expansion of our circles of moral concern.

I feel strongly that those circles can and must be wide enough to encompass the lives of nonhuman animals, including octopus — and lobster and shrimp as well.