Accessibility links
Is Education Tied To Conspiracy Theory Belief? : 13.7: Cosmos And Culture Not all conspiracy theories are harmful, though many have negative effects, says Tania Lombrozo. New research suggests education's consequences can disrupt the processes that draw people to them. 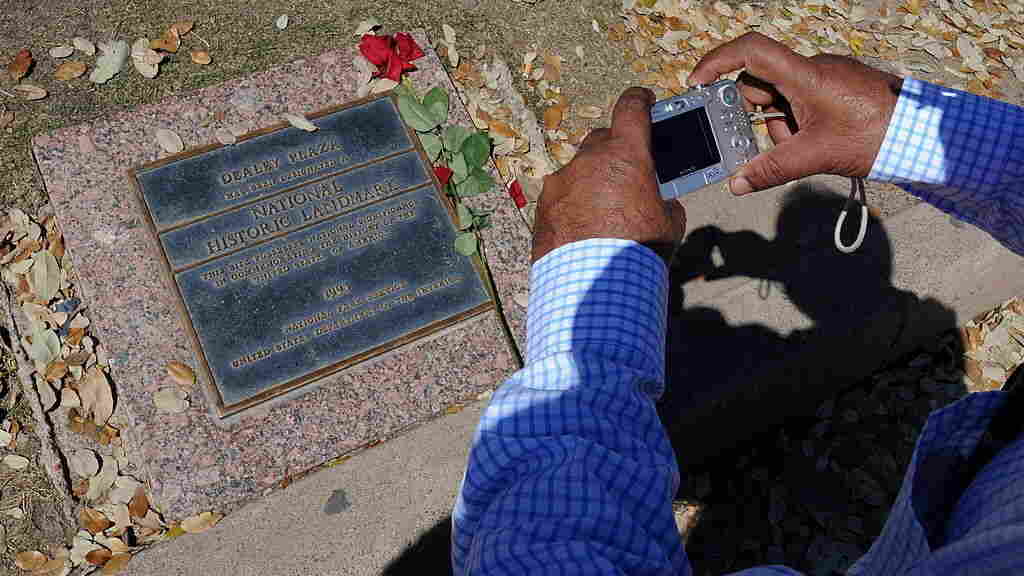 A tourist photographs a historic landmark plaque, on March 13, 2010, in front of the Grassy Knoll and beside the former Texas School Book Depository Building in Dealey Plaza where the 1963 assassination of President John F. Kennedy took place in Dallas, Texas. Mark Ralston/AFP/Getty Images hide caption 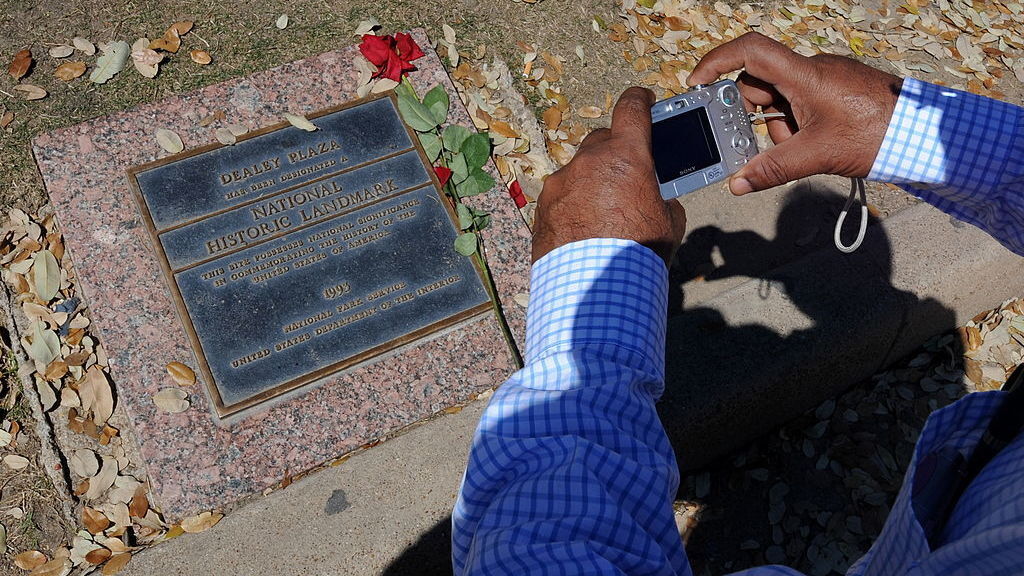 A tourist photographs a historic landmark plaque, on March 13, 2010, in front of the Grassy Knoll and beside the former Texas School Book Depository Building in Dealey Plaza where the 1963 assassination of President John F. Kennedy took place in Dallas, Texas.

Debunked conspiracy theories have been making the rounds on social media lately, from the thoroughly unsupported claim that millions of people voted illegally in California to false assertions about paid protesters being bused to demonstrations.

Conspiracy theories, which typically involve one or more powerful agents secretly manipulating world events, are accepted by a large proportion of Americans. One analysis of four nationally representative surveys found that half of respondents endorsed at least one conspiracy theory, such as the claim that Barack Obama was born outside the United States or that the financial crisis was deliberately orchestrated by a group of Wall Street bankers.

Because conspiracy theories can influence people's attitudes towards individuals, social groups, institutions and policies, they're often of interest to those tracking public opinion and individual behavior.

But they're also of interest to psychologists for what they reveal about the human mind. What makes conspiracy theories compelling to so many people? And why are some people more compelled to believe them than others?

Dozens of studies have begun to investigate these questions. Based on these studies, we know that people who believe in one conspiracy theory (say, that JFK was assassinated by the CIA) are also more likely to believe in others (for instance, that the moon landing was faked). In fact, people who endorse some conspiratorial claims (e.g., that Princess Diana faked her own death) are also more likely to endorse inconsistent alternatives (e.g., that Princess Diana was murdered). These findings suggest that in addition to the idiosyncratic factors that figure into people's reasoning about each unique conspiracy theory, there are more general characteristics about some individuals or their environment that make them more or less inclined towards conspiratorial thinking.

Among other things, studies find that people are more likely to endorse conspiracy theories if they feel alienated, powerless and disadvantaged, and if they are distrustful of others. Conspiratorial thinking is also associated with narcissism, rejection of climate science, and an individual's own willingness to participate in conspiracies. Additionally, a variety of demographic factors have been found to predict conspiratorial thinking, including low levels of education.

These patterns of association are informative, but they're often difficult to interpret. For example, is it the case that education reduces belief in conspiracy theories, or that people who endorse conspiracy theories are less likely to pursue formal education? Moving from correlation to causation is difficult in such cases because a true experiment — in which, for example, people are randomly assigned to education levels — can be impossible, impractical or unethical.

The first paper, authored by psychologist Karen Douglas and colleagues, was published earlier this year in the journal Thinking & Reasoning. It reports evidence that one factor mediating the relationship between lower education and conspiratorial thinking is the tendency to attribute agency and intentionality where it doesn't belong.

In two studies with more 500 participants who completed an online survey, people reported the extent to which they thought nonhuman animals (such as fish), natural entities (such as the ocean), and technological devices (such as televisions) possess attributes that are often restricted to humans, such as having intentions and free will. Those with higher education were less likely to extend these attributes beyond humans, while those who believed in conspiracy theories were more likely to do so. Most importantly, the relationship between education and conspiratorial beliefs could be explained in part by the association between each of these factors and the tendency to ascribe human attributes to non-humans. This suggests that education reduces over-attribution of agency and intentionality, and that this reduction decreases the appeal of conspiracy theories, which often posit one or more agents behind a constellation of potentially unrelated events.

The second paper, authored by psychologist Jan-Willem van Prooijen and forthcoming in the journal Applied Cognitive Psychology, finds support for two additional mediating factors: skepticism towards the idea that complex problems can have simple solutions, and greater feelings of control.

Across two samples of Dutch participants (one including 4,062 readers of a Dutch popular science magazine and the second a group of 1,251 adults selected to be representative of the Dutch population), participants with higher levels of education were more likely to disagree with statements suggesting simple solutions to complex problems, such as: "With the right policies, most problems in society are easy to solve." Participants with higher levels of education also felt that they had greater control over their political environment — they were less likely to report feeling powerless when watching how events unfold in the news, and more likely to agree with a statement such as: "Citizens can influence government decisions;" or "It is possible to object against government decisions." Most importantly, both of these factors also predicted skepticism towards conspiracy theories, with further analyses suggesting that the association between education and conspiratorial thinking was mediated by both of these factors.

While these papers fall short of establishing a causal connection between education and skepticism towards conspiracy theories, they point to the idea that education brings with it a suite of cognitive and affective consequences, and that these consequences can disrupt the processes that draw people towards conspiratorial beliefs in the first place. Moreover, they suggest that one of these cognitive consequences is a shift away from relatively intuitive and automatic processes — of the kind that support simple, intentional narratives — in favor of more deliberative, analytic thinking. In fact, the causal link between analytic thinking and greater rejection of conspiracy theories is the one piece of the story that does have direct experimental support: A paper published in 2014 found that having people complete a task that increased analytic thinking in the short term led them to report lower belief in conspiracy theories when asked immediately after. Education could be a way to generate similar but longer-lasting effects.

Not all conspiracy theories are harmful. Some might promote a healthy skepticism, and some might even be true. But many do have negative personal and political consequences. For these reasons alone, it makes sense to track how and why conspiracy theories arise and gain traction. Yet blaming errant tweets or other forms of social media is just one part of the picture. The real culprit is the human mind — the machinery that generates conspiratorial narratives in the first place, and that guides each subsequent tweet, share, and like.