Accessibility links
Love-Death-Time: The Existential Triangle At The Core Of 'Collateral Beauty' : 13.7: Cosmos And Culture Despite overall poor reviews, a saving grace of the film is that the plot makes us reflect on our own losses and how we choose to deal with them, says commentator Marcelo Gleiser. 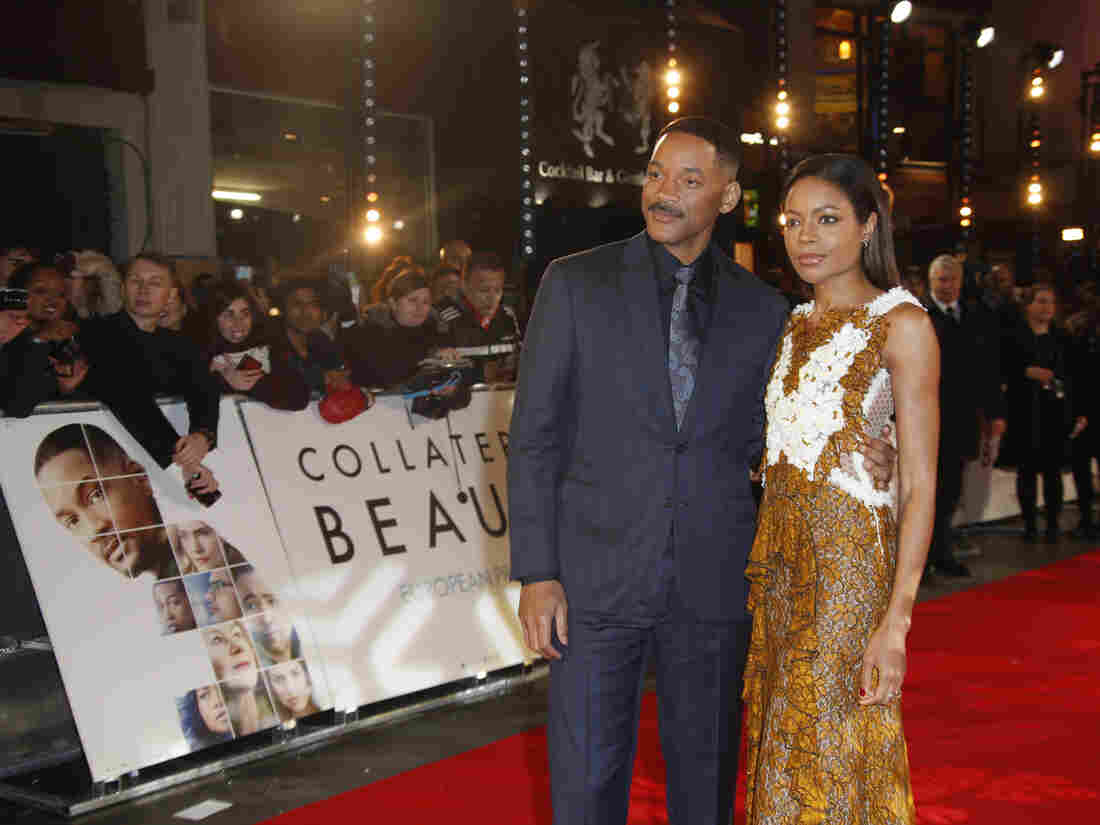 Actors Will Smith and Naomie Harris pose for photographers upon arrival at the premiere of the film Collateral Beauty in London on Dec. 15, 2016. Joel Ryan/Invision/AP hide caption 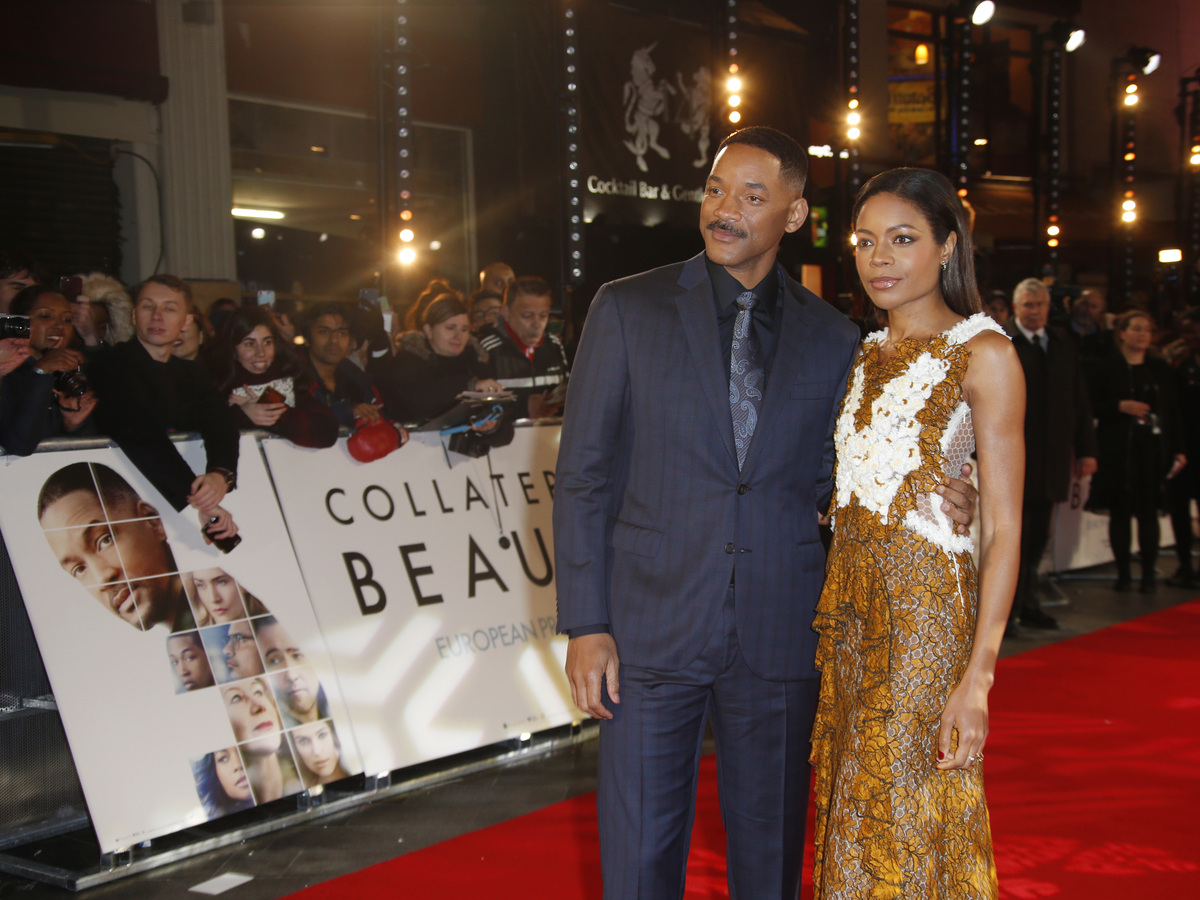 Actors Will Smith and Naomie Harris pose for photographers upon arrival at the premiere of the film Collateral Beauty in London on Dec. 15, 2016.

When we see actors like Helen Mirren, Will Smith, Kate Winslet and Keira Knightley starring in the same movie — and with a theme centered in how to re-find yourself after a terrible personal tragedy — the expectations are understandably high.

I imagine that the producers of Collateral Beauty scheduled its release in the U.S. right before Christmas to cash in on viewers, believing they could challenge even Rogue One, the new Star Wars-inspired movie. Collateral Beauty's narrative has a kind of a Dickensian spin to it, as the main character searches for some level of grace and redemption under desperate circumstances.

The result has been disastrous. The vast majority of critics despised the movie, considering it to be a major waste of talent and time. Adjectives like "manipulative, banal, cliché, dishonest" were used profusely in reviews.

I don't disagree with the negative criticism, but find it interesting to examine what prompted such a virulent reaction. The film deals with what could arguably be considered the hardest theme to treat dramatically, the loss of a beloved child. Howard Inlet (Will Smith), an uber-successful advertising executive — brilliant, charming, a bit like a Steve Jobs of the market place — loses his 6-year-old daughter to a rare form of cancer. With the loss goes his will to live, to love, and to interact with other humans. In his despair (attenuated by wild bike rides across Manhattan, often against traffic), Inlet writes letters to Love, Time and Death, voicing his anger at them. Without getting into the details of how, "they" respond.

Filmed during Christmas in New York, the cinematography may be the best thing in the movie. Even the music fails. What remains is the narrative. What to do with such a loss? The Love-Time-Death triangle defines, to a large extent, our existence. With so much at stake, we hope the movie will bring us something powerful to ponder. At a given point, Time refers to Einstein's Theory of Relativity, saying it states that time is an illusion. Not really — and certainly not from a human perspective. (And also scientific: Time's passage is irrefutable, imprinted in the very expansion of the universe itself. What Einstein offers is a reinterpretation of time, not its non-existence.) Time is in everything we experience, the bridge between love and death, where our grand and not so grand dramas of existence unfold; time is where we place our hopes for a better future. Love may be the central why of our existence, but it can only unfold and gain significance and meaning within time.

The movie's central message seems to be something like: "Time is a luxury we have and often throw away," as we waste our precious short lives in trivialities. Difficult to reconcile this lesson about how to optimize our lives with the devastating loss of a young daughter.

The movie fails when it tries to relate what we should do with the life we have (using time in the best possible way) with the loss of a child, an event that, once it happens, remains outside time: Like a photograph, such loss is a motionless monster, irrefutable, irreconcilable with any kind of justice, divine or not. The mechanisms society offers to deal with such a loss — religious rituals, therapy groups, the company of friends — may distract and attenuate, but can't eliminate, what exists outside time. The pain of loss exists for as long as the affected people live. There is no "cure." The script tries to say something to this extent, but does so in a clumsy and formulaic fashion. For a lesson in contrast, go watch Manchester by the Sea.

With such a ponderous theme — the existential Love-Time-Death triangle — and a super cast, we expect brilliant insights, deep revelations, something we can take home with us to share with friends and family, to grow, even to reinvent ourselves. Instead, we learn that Love is creation, Death is destruction, and Time is what happens in between, a cliché reflection that frankly is quite wrong and oversimplified — something from a Hallmark card. The critics reacted in frustration and disappointment, as they watched a movie with so much potential drown in empty platitudes.

What can be saved, and made me go see the movie despite reading the reviews (apart from watching the always brilliant Helen Mirren play Death), is that the unviability of the plot makes us reflect about the losses we experienced during our lives, and how we chose to deal with them (or not). If there is a "collateral beauty," perhaps it finds its expression in the chances we have in life to reinvent ourselves, moved by the twin engines of love and death, thankful for having the time, at least occasionally, to redirect our expectations.