Accessibility links
Modern Cosmology Turns 100 : 13.7: Cosmos And Culture The expansion of the universe was sealed as fact in 1965, but the seeds for this revolutionary take on the cosmos and our place in it were planted in 1917 by a daring Einstein, says Marcelo Gleiser. 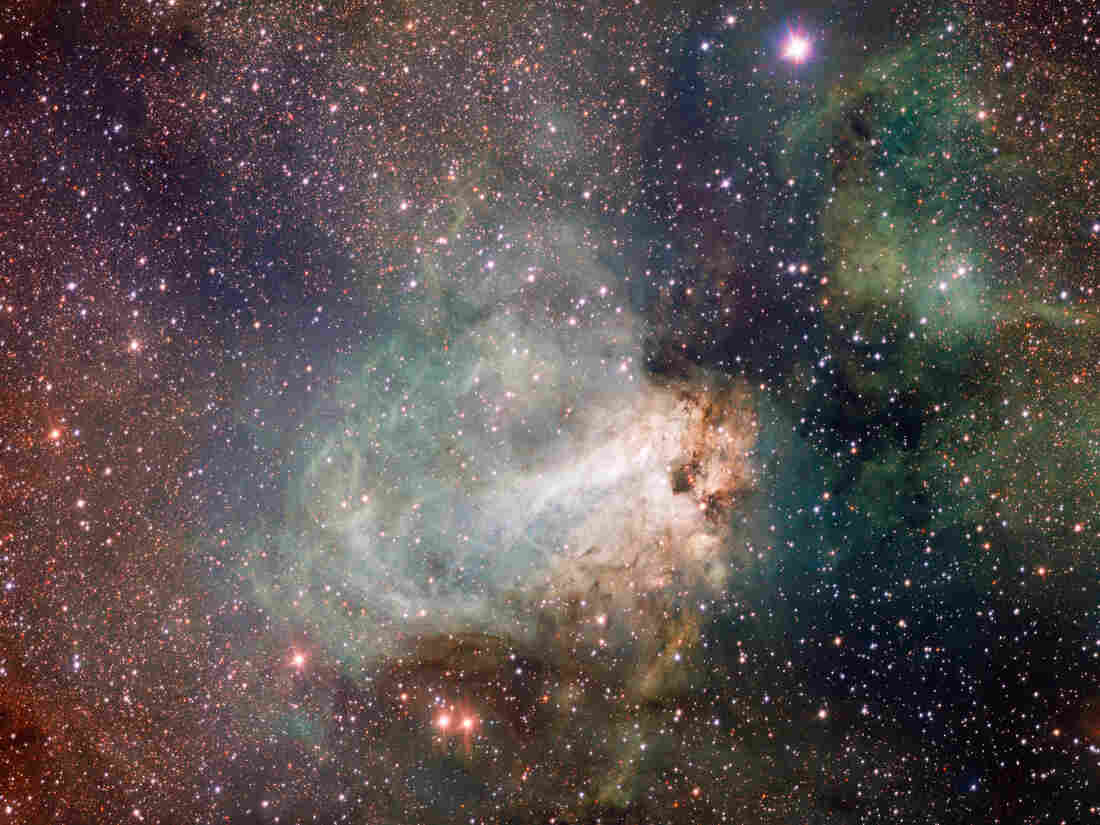 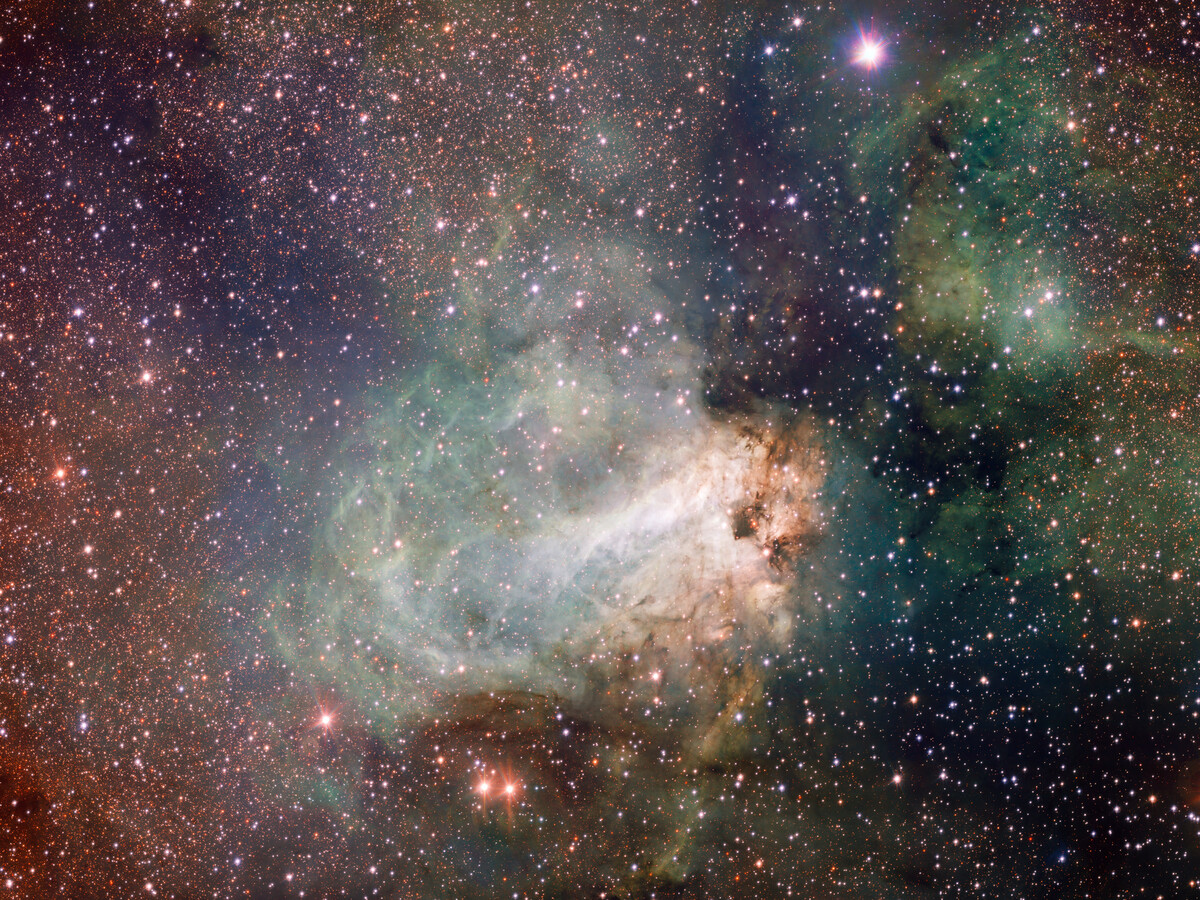 A mere two years after completing his daring General Theory of Relativity in 1915 — where gravity is interpreted as resulting from the curvature of space and time around a massive body — Albert Einstein wrote a daring article, taking on the whole universe under his new lens.

Given that mass tells space how to bend, he reasoned, if he knew the mass contained in the entire universe, he could derive its geometry as a whole. For the first time in history, a single mind attempted to derive the shape of the cosmos not from theological or philosophical arguments, as so many had before, but as the result of solid physical and mathematical reasoning.

As an intellectual move, it took a lot of courage. In what follows, I'll attempt to take you through Einstein's reasoning, as close as possible to the famous 1917 paper.

How would someone apply equations that worked very well for solar-system-scale problems to a much grander scale?

The beauty of Einstein's theory, or any theory of gravitation, is that you can put in any mass you want, within reason. If it's the Earth, or the sun, or a galaxy, all you need to do is adjust the parameters in the equation and make sure your assumptions still work. (These assumptions usually relate to the symmetry of the mass distribution. For example, if it's a sphere — like a spherical planet or star — or if it has cylindrical symmetry, etc. In practice, these symmetries are usually approximate.) In the case of the equations of general relativity, the input is the mass or, more precisely, what is called the "energy-momentum tensor," a fancy name to describe all possible sources capable of affecting the geometry of space --- the sources of gravity and the output is the geometry of space around the source or sources.

Einstein had applied his new theory beautifully within the confines of the solar system, where the sun is the dominant source of gravity. For example, he described the peculiar behavior of Mercury's orbit known as the "precession of Mercury's perihelion," whereby the plane of the planet's orbit turns very slowly around the sun, by less than two degrees per century. Newton's theory couldn't account for the effect properly, already known to 19th astronomers. At the time, and even today, to have a new theory of gravity that could describe such tiny effects with high precision was truly amazing.

An emboldened Einstein decided to tackle the big question, the shape of the universe as a whole. To make the problem tractable, he made a few simplifying assumptions: first, that the cosmos should have a spherical shape. Spheres are wonderful in that you only need one parameter to describe them: their radius. Einstein was a Platonist, who firmly believed in a mathematically simple cosmos. A sphere was the simplest of all shapes possible. The goal was then to find a solution to his equations relating the size of the cosmos to the matter contained within it. This solution should be of a static cosmos, that is, one that didn't change in time. After all, by 1917 there was no compelling evidence that it should be otherwise, that the universe could actually change in time.

To model the matter in the universe, Einstein proposed what he called "the cosmological principle," a principle that still dominates cosmology today. Essentially, when looking at very large distances (in modern numbers, hundreds of millions of light-years across), the universe looks the same everywhere and in every direction. That is, for a given big volume, there should be as much mass as in the same volume elsewhere, and distributed in a similar way. Imagine a very crowded beach. If you look closely, you will notice unique details, the people laying down or standing up, the color of their umbrellas, etc. But as you zoom out, these details are gradually lost and you see an ocean of people, everywhere pretty much alike. Likewise, the sky we see at night looks quite different with its constellations here and there. But zooming out of our galaxy and more, to hundreds of millions of light-years, we see galaxies somewhat evenly spread across space, and the universe starts to look everywhere pretty much alike.

Einstein described the cosmic matter using the "average energy-density of the universe," the approximately constant amount of mass contained in a large sphere, big enough that the cosmological principle applies. With this move, his equations beautifully reduce to relating two numbers: the cosmic radius and the cosmic energy density.

Before he declared his job done, however, Einstein tested the stability of his desktop universe. This is a very good precaution, given that on many occasions the solutions we find to the equations describing physical systems are unstable: Once perturbed, they collapse or expand in ways that contradict observations. Such unstable solutions are often discarded, for they betray a mistake in the assumptions leading to them.

Einstein was shocked to see that his cosmos was unstable: There was no stable, static, spherical solution satisfying the cosmological principle.

Now what? A cosmos changing in time was not in the cards for Einstein, at least not for a while. He also didn't want to abandon the cosmological principle, or the assumption of a static and spherical cosmos.

To salvage the situation, Einstein added a new term to the equations of the General Theory of Relativity, a term we now call the "cosmological constant." As the name says, it's a constant term, with a very specific function: to create a sort of repulsion in the geometry of space so as to counterbalance its tendency to collapse due to ordinary gravity. It's not really what many people refer to as an "anti-gravity" term, as it only affects the geometry of space. Matter continues to attract matter normally.

Einstein was not proud of his new term, as it spoiled the minimalist beauty of his original theory. But it worked, and it was mathematically and physically consistent with the principles of the theory. He found his solution and was done with it.

Meanwhile, the Dutch physicist Willem de Sitter played a different game: Given that the universe seems so empty, what if we took the extreme limit and set all the matter density to zero, keeping only the new cosmological term? De Sitter's was an empty universe with a cosmological constant. Not surprisingly, with nothing to hold the geometry of space back, he found a solution where the universe stretched furiously outward. It was thus possible, in principle, to have a changing cosmos, although in de Sitter's case its emptiness allowed people to play mathematical games and still show that his solution was static.

The big surprise came from Russia in 1922. Alexander Friedmann, a meteorologist by training, learned the new theory and decided to relax Einstein's assumption of a static cosmos. Lo and behold, he found solutions without the cosmological constant that grew or shrank in time: the modern version of a dynamical universe was born.

Einstein only accepted the notion of an expanding universe in 1931, after visiting the American astronomer Edwin Hubble and witnessing first hand his observations showing galaxies moving apart from one another at a rate proportional to their distance: the farther apart, the faster they move. Even if the expansion of the universe was only to be sealed as an observational fact in 1965, the seeds for this new and revolutionary take on the cosmos and our place in it were planted back in 1917, when a daring Einstein believed in the power of his mathematical and physical reasoning to take on the whole universe.