Accessibility links
Math To The Stars: The Ladies Of 'Hidden Figures' : 13.7: Cosmos And Culture If there is a central lesson in the movie, it is that united we win; that what makes America great is not segregation and intolerance, but openness and inclusiveness, says physicist Marcelo Gleiser. 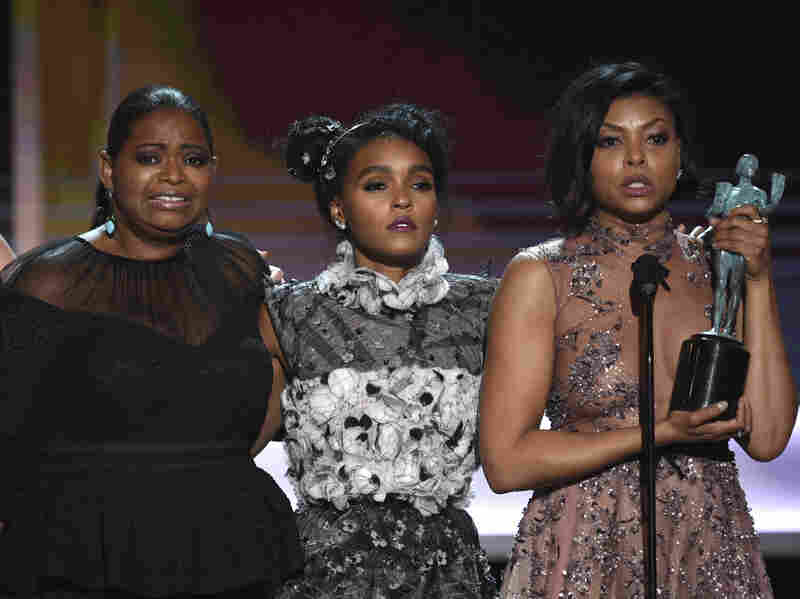 To go to space we need math. Lots of it.

Most of us look in awe at the towering rocket ship strapped to the launching platform and forget the tremendous amount of work it took for it to get there — and, from there, to get into Earth's orbit and beyond. Engineering, math, physics, chemistry, computer science: It's all there, waiting for blast-off.

Now, travel back to 1961, when the U.S.A. was behind the Soviet Union in the space race. It all started with Sputnik, a 184-lb. silver ball, 23 inches in diameter, launched into orbit by the Soviets on Oct. 4, 1957. Less than a month later, the Soviets launched Sputnik 2, with the dog Laika as passenger. Getting to the moon and putting humans into orbit was the next logical step.

A sequence of space flights from the U.S. and the Soviet Union followed. This was no friendly competition. At the height of the Cold War, space was seen as the new frontier, the place to dominate — or be dominated. The stakes got higher when the cosmonaut Yuri Gagarin became the first man to orbit the Earth on April 12, 1961.

This is where the hit movie Hidden Figures begins, in the heat of the race. NASA had been founded only three years earlier. The pressure, both political and public, to succeed was enormous. National pride was in the balance. Plus, in the midst of Cold War paranoia, who knew what the Soviets were planning to do "up there?"

The movie paints an accurate picture of the political expectations of the time, the widespread fear. But its beating heart is the science done by three African-American ladies, all brilliant at what they did. Aspiring engineer Mary Jackson (Janelle Monáe) accidentally spots a fault in the heat-shield tiles of an experimental capsule. In the movie version, NASA was segregated in 1961. To go to the bathroom, human "computer" Katherine Goble (played beautifully by Taraji Henson), had to scamper half a mile across the Langley Research Center facility. The amazing mathematician, the first "colored" woman in the team, couldn't even drink coffee from the same coffee maker as her peers. These people computed launching and re-entry trajectories by hand! And Goble was an absolute marvel at this, to the surprise, and even disgust, of her envious white-male colleagues.

Hidden Figures was deservedly nominated for best picture. Nice to see long mathematical equations flowing on a tall blackboard in a movie that has been so successful in the box office. I confess my embarrassment, while watching the movie, for not knowing any of this story. I mean, this is a true story every little boy and girl, especially girl, should know. How could I have missed this?

The third in the group, Dorothy Vaughan, played movingly by Octavia Spencer, fought in vain to be promoted to supervisor, a job she was already doing in practice. Her break finally came when NASA bought an IBM 7090 electronic computer that no one, apparently, knew how to program. Dorothy, with a knack for mechanical contraptions (yes, computers at the time had many moving parts, levers, tapes, and connecting wires and plugs), learns how to set it up. A visionary, she borrows a book about FORTRAN at the public library, the programming language people still use today for launching rockets. (With some modifications of course.) She gains everyone's respect and gets her promotion as supervisor of the programming department, bringing her other "colored" girls with her.

The movie builds up its narrative from connecting the three stories, playing with historical accuracy to get its message across. In reality, NASA wasn't segregated when it substituted NACA (National Advisory Committee for Aeronautics) in 1958. Dorothy Vaughan was promoted to supervisor in computing in 1949. Mary Jackson completed her engineering degree in 1958, becoming NASA's first black female engineer. Katherine Johnson had been in the Flight Research Division since 1953 and moved into the Space Task Group when it was formed in 1958. Her boss, played in the movie by Kevin Costner, was not Al Harrison but Robert Gilruth. John Glenn did ask her to check on the IBM re-entry calculations.

So, the amazing thing here is that the true history of these three women is even more remarkable and trailblazing than the one portrayed in the movie.

What the movie does, and does beautifully, is weave their professional and personal lives together, humanizing them, showing how science and deep emotions and feelings are perfectly compatible, something many tend to dismiss. The movie is a celebration of the human spirit, of the power of individual determination and drive, and of the need for a nation to stand together, to look beyond racial and cultural differences in order to face a new challenge. There is much ugliness portrayed in the segregated Virginia of the early 1960s, a somber echo of a past that is still so present and, in a new incarnation, that threatens to destabilize this nation once again. If there is a central lesson in the movie, it is that united we win; that what makes America great is not segregation and intolerance, but openness and inclusiveness.