Accessibility links
Using Pet-Directed Speech With Dogs May Convey Intentions In Subtle Ways : 13.7: Cosmos And Culture In using pet-directed speech — similar to how some moms talk to babies — with our dogs, we may aim to optimize communication of our intentions and emotions, explains anthropologist Barbara J. King. 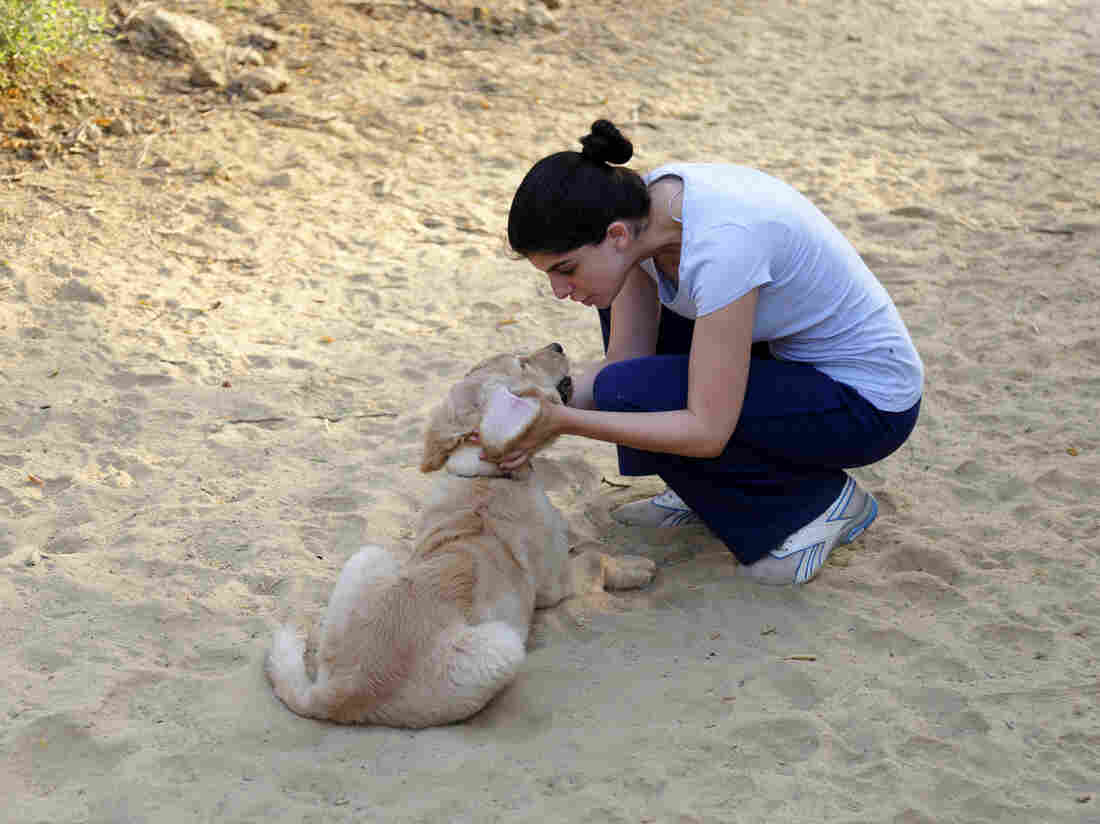 You know that voice we tend to use when speaking to babies?

It's a sing-song voice, one with higher pitch, shorter phrases with simpler grammar, slower speech rate, more repetitions, and greater contrast in our vowels. It's called "motherese" or, more accurately, IDS (for infant-directed speech).

We may talk to our dogs in very much the same way, in what's called PDS (pet-directed speech). And animal-behavior researchers have now shown for the first time that PDS varies in subtle ways depending on what the dog and owner are doing together — and that those variations go beyond the basic speech patterns I've described (called prosody) to include specific content of the utterances directed toward the dogs.

In a paper titled "Effect of interaction type on the characteristics of pet-directed speech in female dog owners" published online in Animal Cognition last week, researchers describe how they invited 34 women to interact with — and speak to — their dogs in four different contexts: before a brief separation, after a reunion from that separation, during play and when giving commands.

The women used simplified utterances with their dogs, with a limited vocabulary and frequent repetition. The most noteworthy finding was this:

That's a significant set of findings because it shows that PDS, at least in this study, is about more than just prosody: When the women communicated with their dogs, they adapted both their actual words and also their prosody to the specific behavioral context. That means they're communicating quite purposefully and strategically, using all the resources available to them as language users, with their nonhuman social partners.

Or to put it another way, as lead researcher Sarah Jeannin of the University of Paris Nanterre said in an email:

"Our results show that female owners do adapt the way they communicate with their dog, in order to optimize the transmission of their intentions and emotional states, and in this way, facilitating their social interactions."

In its immediacy — in its context of woman and dog in close interaction — the research by Jeannin and her co-authors Caroline Gilbert and Gerard Leboucher is quite different from another study earning headlines last month. In that study, women were asked to speak to photos of dogs. Then, recordings of their PDS utterances were played back to dogs, to check their responses.

Puppies, but not older dogs, responded more attentively to PDS than to regular adult-directed speech.

Adult dogs didn't seem to prefer PDS at all.

But in that experiment, the voices played back were unfamiliar to the dogs --- and completely abstracted away from any sort of direct dog-person interaction.

Jeannin et al.'s research is more focused on the human side of the equation rather than the dogs' but, even so, their approach of setting up more natural encounters between dogs and their owners strikes me as likelier to produce an accurate picture of PDS.

I did wonder whether their study could have been even stronger had men's PDS been compared to women's. Of this, Jeannin said:

"We had good scientific reasons to focus on women's PDS, because previous studies have clearly pointed out gender differences with respect to the use of PDS (and maybe for IDS): male owners speak less frequently when interacting with their dogs and are less likely to use PDS than female owners."

Are we even aware of the way we communicate with our dogs, I asked Jeannin? She said via email:

"I think most owners are aware that they spontaneously modify the way they communicate when addressing their dog using a high pitched voice and affectionate nicknames, but I don't think that they are conscious about the subtle acoustic modifications of their speech according to the emotional context of the interaction.

These modifications seem to be driven both by their affection towards their animal and by the interaction's context."

When it comes to IDS, the speech directed towards our own infants, we know it's used in many cultures, but not all. So it isn't a linguistic universal or ingrained human pattern.

I would guess that PDS isn't a linguistic universal either: It's certainly not the case that people in all communities or all cultures have the desire, the time, or the resources to embrace dogs as part of the family or develop intimate emotional relationships with them.

In this regard, it's particularly interesting that Jeannin et al. discovered in their study that women without children spoke to their dogs with a higher voice compared to women who were mothers.

"One explanation," they write, "could be that non-mothers have a stronger tendency to express friendliness and affection to their dogs," a finding consistent with research that shows that people who do not live with children tend to be even more attached to their dogs than others.

There's increasing scientific interest in the field of anthrozoology, and I can see why: Studies like this one tell us there's more than meets the eye — or the ear — in our everyday interactions with our animal companions.