Accessibility links
Do We Really Need To Speed Up Baseball? : 13.7: Cosmos And Culture Major League Baseball is considering ways to shorten the game. But the problem baseball faces isn't the speed of the game: Players and spectators alike need to slow down, says blogger Alva Noë.

Do We Really Need To Speed Up Baseball?

Do We Really Need To Speed Up Baseball? 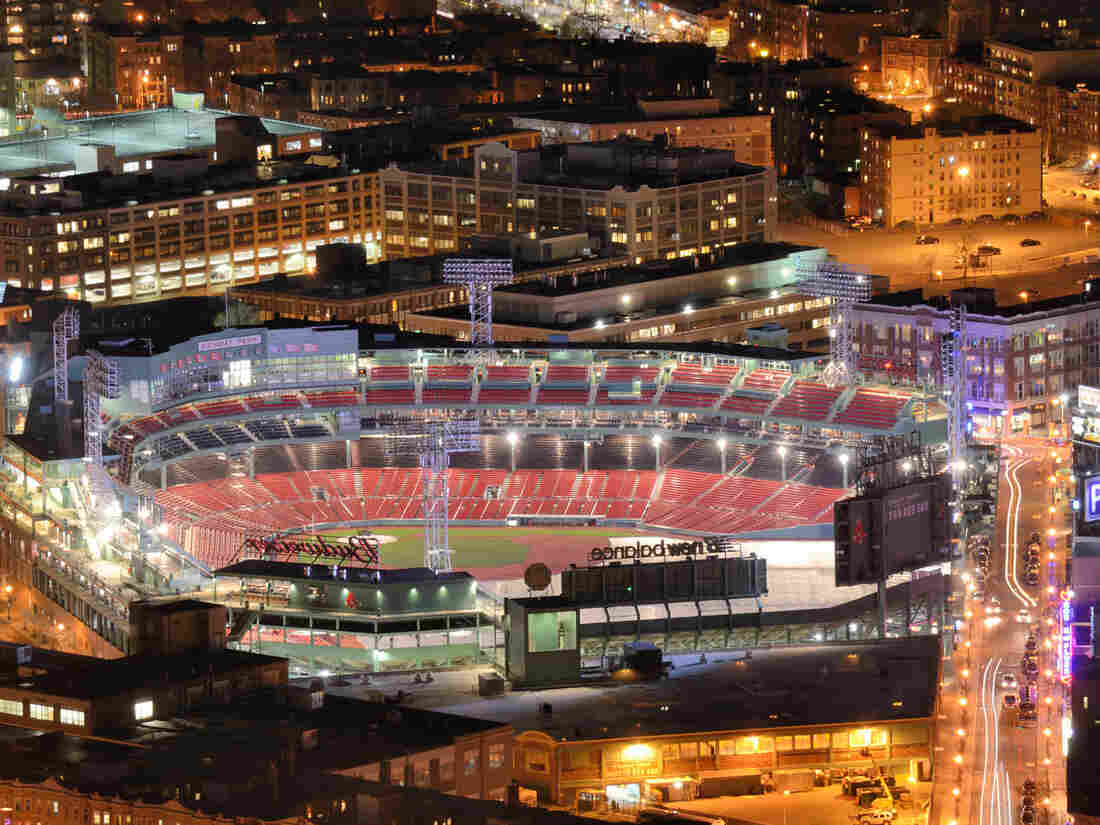 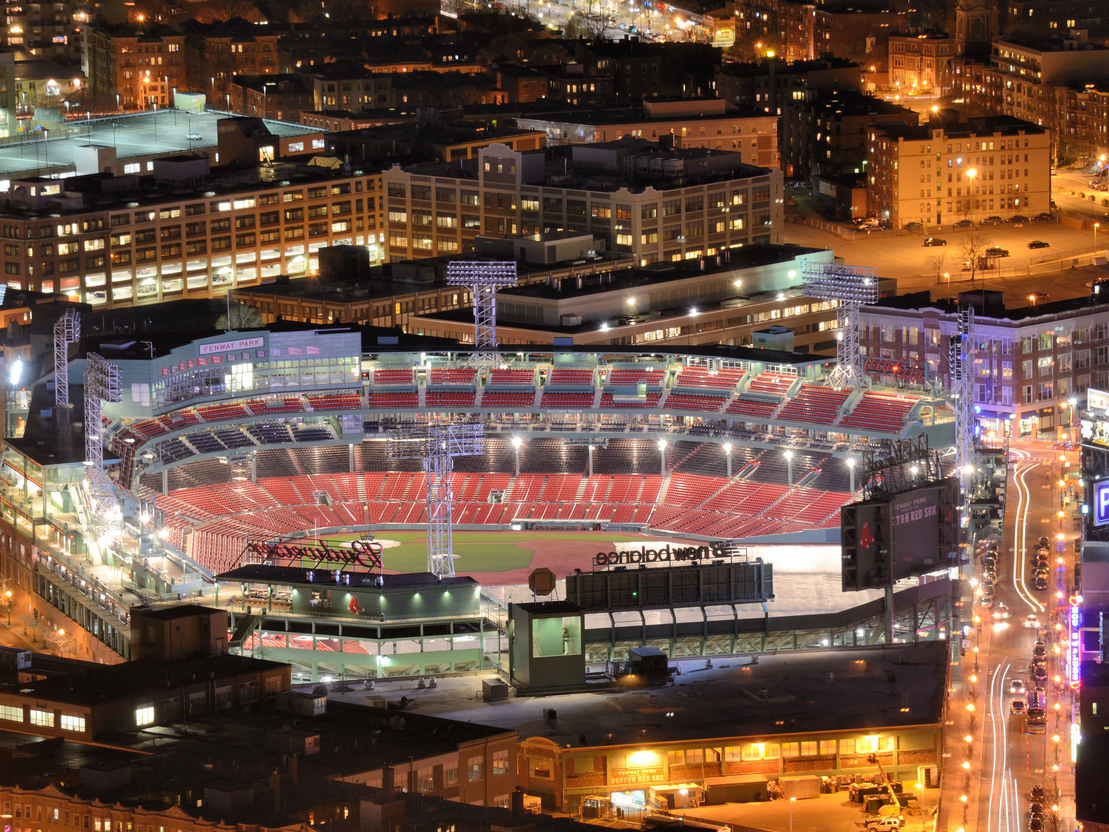 Fenway Park in Kenmore Square is home to the Boston Red Sox.

Major League Baseball has been wrestling with the question of how to shorten the length of baseball games.

It is eager to find ways to speed things up. The New York Times invited staff writers and their readers to offer suggestions (some of which it published earlier this month) — and was inundated with ideas ranging from the reasonable (more strict enforcement of time outs during at bats) to the unrealistic (actually lop off innings of play, or make it two strikes and you're out).

The history of baseball is a history of rule changes. The mound was lowered after 1968 as a response to too dominant pitching; the foul strike rule — making some foul balls count as strikes — was introduced in the 20th century to counter the opposite problem, the failure of pitchers to contain hitting. These were changes introduced to improve the game and level the playing field in the face of shifting styles of play and shifting technologies (new balls, for example). They represent a real evolution of the game. They also introduce an element of incommensurability when it comes to comparing on-field accomplishments across different eras. The extraordinary pitching accomplishments of Bob Gibson, Tom Seaver and others were made possible, at least in part, by conditions of play that no longer remain. Or consider the fact that prior to 1920, the most homers hit in a season was 29 — by Babe Ruth. After 1920, offensive statistics boomed, in large part because of changes in the way balls were handled during play. (The so-called live ball era.)

The rule changes now contemplated are of an entirely different kind. They aren't designed to improve the game but, rather, to improve the product. I won't second-guess MLB's analysis of the marketing realities. I'll defer to their expertise when it comes to knowing how to maximize revenue. If the people want a faster game, well, then, give 'em what they want.

But I think they're making a mistake nonetheless. What makes baseball boring — and I agree that lots of people think baseball is boring — is the same thing that makes classical music or physics boring (to some people): It's difficult. It takes knowledge and focus to understand what's happening on the baseball field. Every juncture is the intersection of multiple decisions. What to pitch? How to position the fielders? Where to make the play? And the answers to these questions depend on the situation specifics — and are sensitive to endless complication. Are there men on base? Who's batting, and who's on base? Who's on the mound? How fresh is he? What's the situation on the bench? Who's on deck? And on and on.

It takes not only experience, but also curiosity and patience to realize what's at play in a baseball game. For one who can perceive all this, the game is anything but slow. In fact, it's way too fast. You've got to be quick to keep track of what's going on so that you don't get stuck making decisions too late.

It takes time to follow and understand the game, and it takes time to play the game — and play the game well. Batters and base runners and fielders have a lot to think about, a lot to understand. The game has evolved techniques of distributed decision-making. Managers signal catchers who guide pitchers; they relay messages to coaches who communicate with hitters and runners and fielders. It looks like they're all just standing around scratching themselves. In fact, they are hard at work, deliberating, communicating, deciding. And delivering action in real time.

Of course it's a slow sport. It's gotta be slow. But that's not slow boring. Not for the players. And not for the fans who both understand and empathize with players.

Consider the showdown between pitcher and batter known as the "at bat." For each of them, this is it: It's his chance, an epic opportunity for self-actualization. The pitcher has to risk everything and dare the batter to swing at pitches he can't hit, with the eyes of the world, and those of every player or person in the ballpark, upon him. The batter, for his part, faces the puzzle of figuring out what the pitcher is going to do; unless he knows in advance, he doesn't have much of a chance of hitting anything. The ball moves too fast. His problem is physical, but it's also intellectual and highly stressful. He, too, is in the spotlight. Why shouldn't he step out of the batter's box to refasten his batting gloves? He's doing everything he can to focus, to find a way of being present and in control in a difficult situation.

A comparison with Little Leaguers will help. A Little Leaguer at bat doesn't call time out between every pitch. He has to be taught to use stepping out of the box as a way of settling himself down and taking control of the battle, the bout, the dance that he is caught up in with the pitcher. The pitcher, too, needs to find a way to let go of what has, maybe, just gone wrong and maintain focus on his current task: using his body to hurl a ball more than 90 mph to a narrow little target some 60 feet away. The pitcher needs to breathe, to organize, to keep control of the pace of play if he isn't going to get blown away.

Now, if you don't know what you're seeing, if you don't understand the tactical minutiae constraining every little thing these guys are doing — and if you don't appreciate the difficulty and stress that they are under — well, then, yeah, it doesn't look like much is going on. Or maybe you just aren't even really paying attention, multitasking as you may be with your smartphone. Boredom is the fruit of your disconnect, your disengagement.

But speeding up the play is no remedy for this kind of boredom that is born of disengagement and indifference.

The managers and curators at our art museums face exactly these challenges. The art may be as good as it gets. The curious thing, though, is that it can't speak for itself. It's as if every work, no matter how great, no matter what, is in the "standby" mode until you, the viewer, figure out how to turn it on — that is, figure out what to look at, think about and pay attention to. So how can the museum assist you in figuring out how to turn the work on? How can it make the work accessible to you? Wall text may help, but it can also distract. Audio guides can be an instrument for helping you figure out what to care about. But they can just as easily prevent you from actually seeing anything at all. A lot of museums produce shows these days as if the show is really just the backdrop for the real experience, which is the chance to buy branded products. Gift shops are situated in museums like duty-free shops in airports. They are a place for people to relax, stop working and do what comes easily: spend money. They are a relief from the art.

Baseball is a business, so I don't doubt for a minute that revenue will guide decisions about the future of the game. But I would invite the decision-makers to pause long enough to realize what is at stake. Baseball is a game of ideas; it's more like chess than like soccer.

The problem baseball faces isn't that it's going too slowly. The problem isn't that it isn't going slowly enough. Players and spectators alike need to slow down and let the baseball happen.