Accessibility links
Adoption Of Bow Use In Ancient Hunting May Have Set Off Societal Changes : 13.7: Cosmos And Culture When our ancestors adopted the bow, the profile of who hunted for game may have changed dramatically, says anthropologist Barbara J. King. 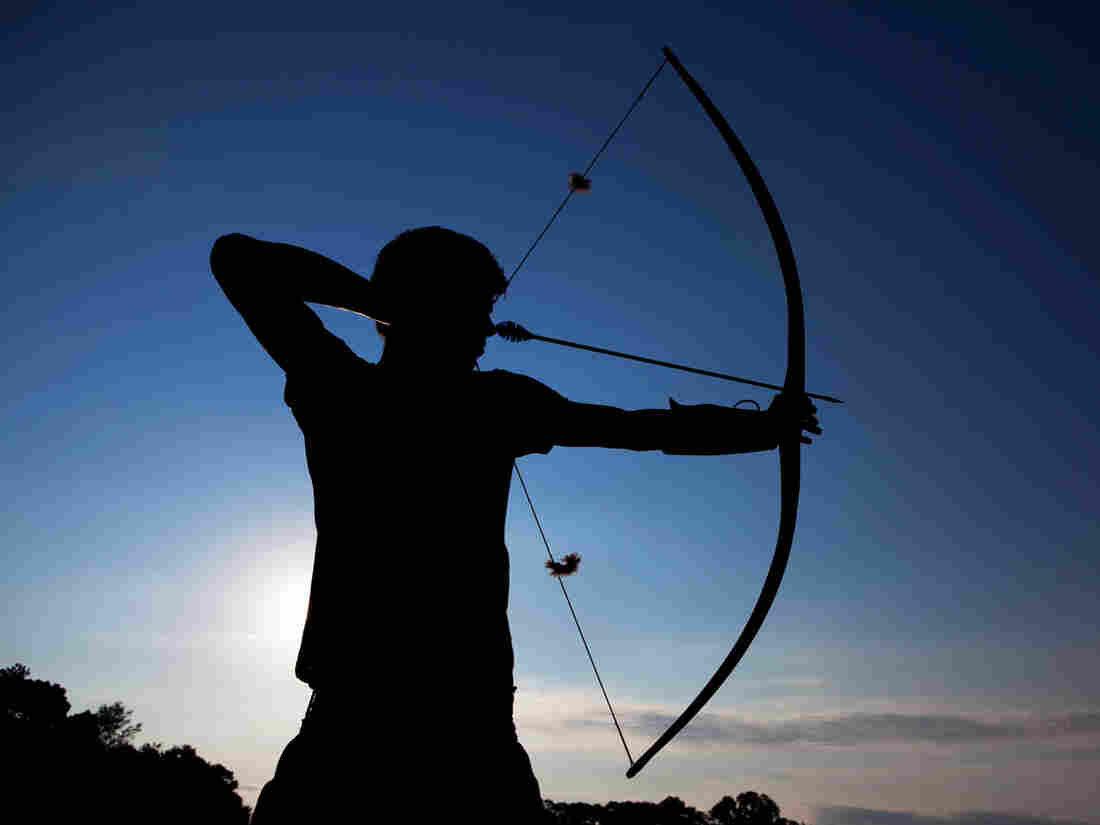 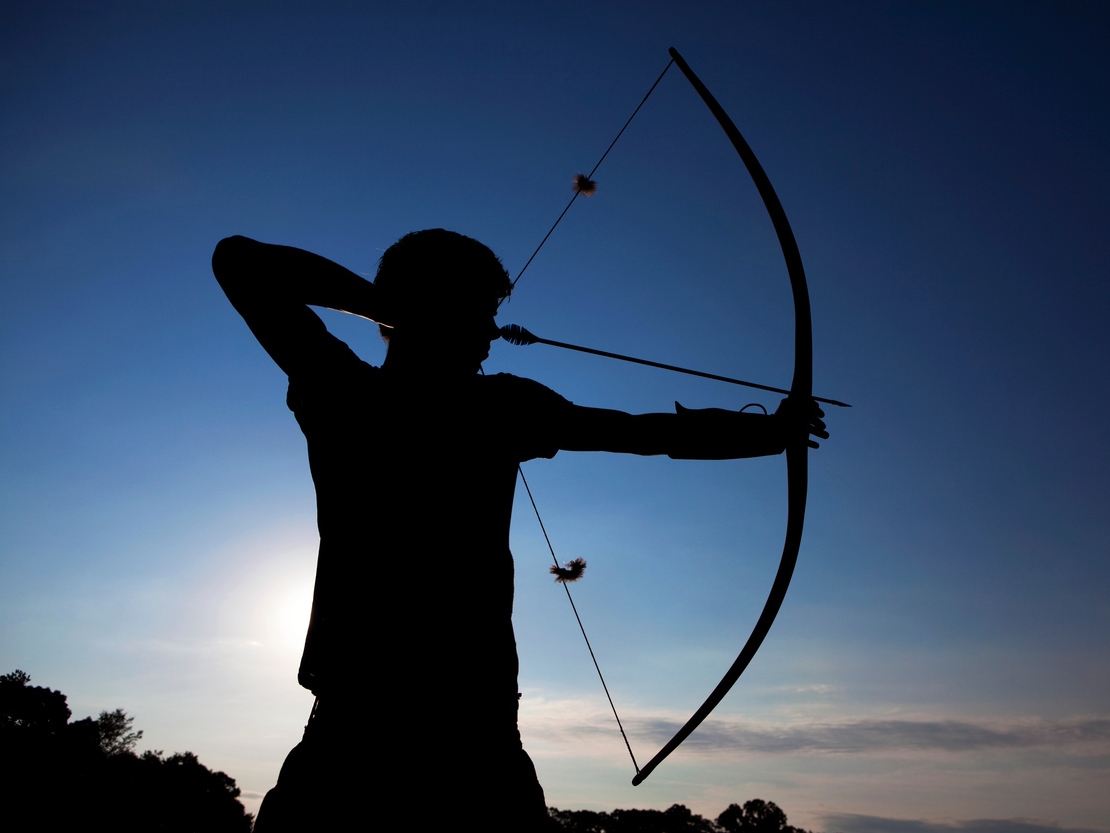 At a point during human prehistory, hunters' reliance on the spear-thrower, or atlatl, shifted to another kind of weapon — the self-bow.

This change happened on multiple continents (though bows never really caught on in Australia, where atlatls tended to yield only later, to firearms).

The first bows we know of conclusively, from archaeology, come from pine arrow shafts found at a bog site in Germany called Stellmoor, dating to around 11,000 years ago. Though, it's possible bows were in use much earlier in Africa.

Why did the bow replace the atlatl, and what social consequences may have followed from that shift? These are questions being asked by University of Wyoming PhD candidate in anthropology Brigid Sky Grund in a new paper in American Anthropologist, from which I took the above information.

As Grund notes in the article, most theories about this shift have pointed to the bow's greater accuracy and faster reload rate in hunting smaller fauna or in warfare. But Grund herself is looking instead at a different factor: the comparative learnability of each weapon. She writes:

"Most studies of bow and atlatl performance characteristics focus on the inherent qualities of the weapons themselves, neglecting to consider that functional weapons are wielded by capable individuals of various ages, sexes, strengths, dexterities, and skill levels."

I like this insight, because it puts people, in all our formidable variation, back into the equation, front and center. It's a dynamic-systems analysis if you will, in which a weapon and its user are inseparable.

In her analysis of learnability, Grund uses modern-day, long-term data sets — up to eight years' worth — from competitors participating in the World Atlatl Association International Standard Accuracy Contest (ISAC) and the Society for Creative Anachronism Inter-Kingdom Archery Competition (IAC).

Because she was able to track individual competitors' scores over time, she could see something about the rapidity of the learning curve for each weapon. As it turned out, individuals' atlatl scores increase rapidly right from the start, whereas people's bow scores don't — in fact only in the fourth year of competition do bow users begin to approach maximum skill level.

In addition, youth scores from the two competitions, taken together with anthropological data on real-world hunting-weapon use, show that "biological constraints may preclude juveniles from wielding bows until later ages than atlatls."

Grund thinks, then, that less strong weapon users in the past — based on contemporary differences in strength and dexterity in men and women, this group was likely to have included some women as well as juveniles — may have been more likely to learn how to use an atlatl effectively. The stronger, skilled members of a population would, then, be the ones more likely to readily learn how to use a bow successfully.

In an email message last week, Grund elaborated on this point:

"If entire family groups comprised of people of varying ages, sexes, and strengths wield projectile technologies as part of hunting parties, atlatls may be favored over bows because they are accessible to wider segments of human populations.

On the other hand, if only a few individuals from a family or cultural group are required to participate in hunting behavior, then the exclusivity of bow technology might not matter, since projectiles would only be wielded by a few hunting specialists within that group."

It's that line of reasoning that leads Grund straight into the realm of prehistoric social behavior. In her paper, she concludes that the bow's favoring of highly skilled weapon users probably "exacerbated prehistoric social disparities and likely catalyzed emergent age- and-sex-based social divisions in prehistory."

If she's right, that's a broadly important finding in anthropology, because it clues us in to a cascade of major social changes in human groups over time.

But what about our why question: Why the shift from an easier-to-use to a harder-to-use hunting weapon?

Echoing the behavioral-ecology perspective in her paper, Grund said (excerpted from a lengthier answer):

"Chronologically, in many regions of the world, the adoption of bow technology seems to be coarsely correlated with a broadening of diet breadth and an increased preponderance of small game hunting.

Many human behavioral ecology studies of modern foragers have shown that under broad diet breadth and/or high resource stress conditions, the sexual division of labor increases. Therefore, a shift towards hunting smaller game under many prehistoric scenarios was likely associated with an increase in the division of labor, simply as a product of fluctuating resource exploitation strategies and dietary needs."

As she continues, Grund explains more precisely where the atlatl-to-bow shift comes in:

"Increased divisions of labor associated with broadened diet breadth and the appearance of hunting 'specialists' might cause a shift from atlatl to bow technology, and, reciprocally, the adoption of bow technology might inherently intensify emergent divisions of labor since it is less accessible to people of varying ages, sexes, strengths, and/or dexterities.

Though I haven't disentangled cause and effect yet, it seems that both the shift from atlatl to bow and chronologically associated fluctuations in resource exploitation strategies likely worked together to increase divisions of labor in prehistoric societies."

An acknowledgment that cause and effect can't easily be distinguished in this case is welcome. Still, I think Grund is on to something by thinking broadly about generalists versus specialists in weapon use.

In our prehistory, at certain times and places, individuals became more specialized for certain tasks that others in the group couldn't, or didn't, carry out — and this in turn set social changes into effect. Precisely how human groups might be affected by the exclusion of certain group members from effective use of hunting technology such as bows may vary by region and will require new hypotheses and further work.

While discussing all this, I learned that for Grund, atlatls aren't merely academic. She threw her first atlatl dart back in high school, continued to experiment with atlatls during archaeology fieldwork, and in 2011 took first place in the novice/"non-regular competitor" women's division of an informal atlatl competition organized by the World Atlatl Association and the Wyoming Archaeological Society.

That paper mâché mammoth isn't credited in Grund's American Anthropologist paper. But who knows? Grund's hands-on experience may have played a role in her coming up with an innovative hypothesis about hunting patterns in our past.