Accessibility links
Science Isn't Partisan, But Public Perception Of Science Often Is : 13.7: Cosmos And Culture A new study finds that science is assimilated within a web of existing attitudes and beliefs, a core part of which concerns a person's social identity, says Tania Lombrozo.

Science Isn't Partisan, But Public Perception Of Science Often Is

Science Isn't Partisan, But Public Perception Of Science Often Is 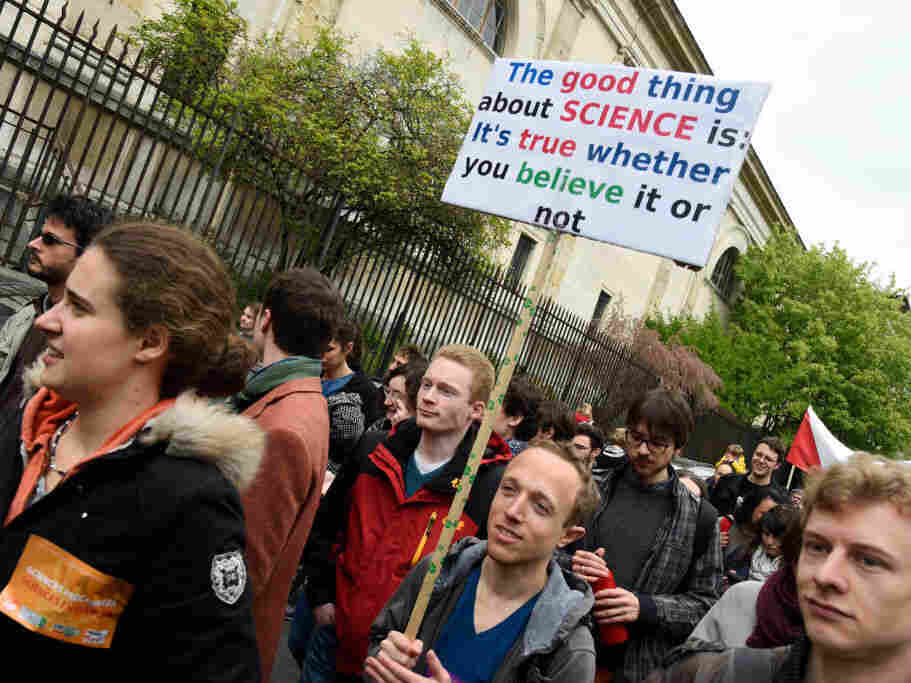 As part of the global March for Science, demonstrators march in Paris on April 22. John van Hasselt/Corbis via Getty Images hide caption 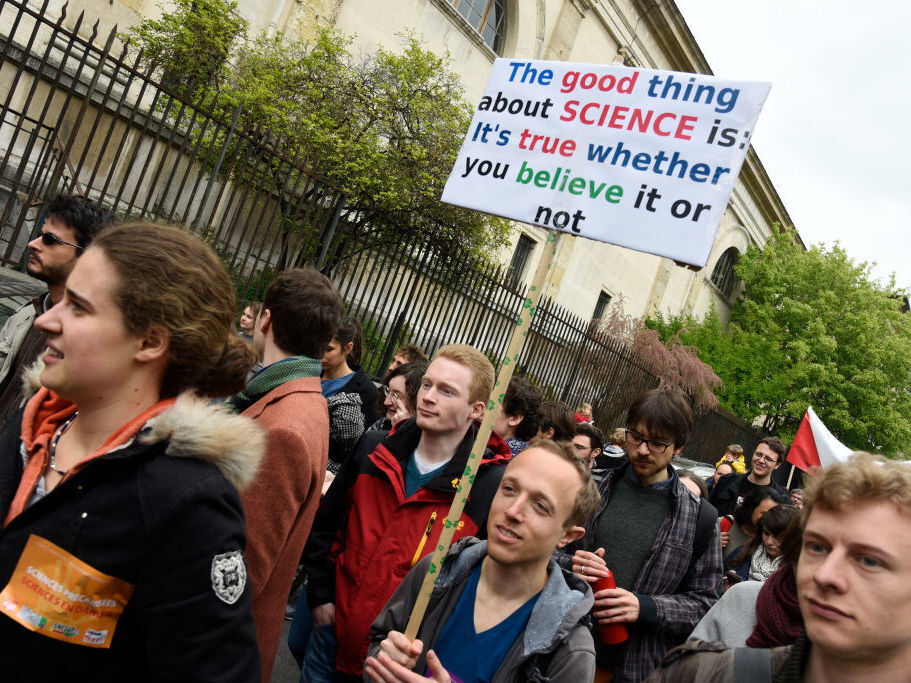 As part of the global March for Science, demonstrators march in Paris on April 22.

Last Saturday, tens of thousands of people across the country joined the March for Science, an event that the official website described as "the first step of a global movement to defend the vital role science plays in our health, safety, economies, and governments."

It's no secret that the event was largely prompted by Donald Trump's actions and proposed policies, many of which threaten efforts to curtail climate change and ignore the value of scientific research and evidence-based policy. But advocates for the march were generally careful to separate science from partisan politics. As one headline declared: "The March for Science isn't partisan or anti-Trump — it's pro-facts."

Whether or not science is partisan or political, the perception of science often is. Beliefs about many scientific issues, such as human evolution and anthropogenic climate change, correlate with political ideology and party affiliation. There are also associations between political orientation and more general attitudes toward science and scientists. For instance, when it comes to assessing the possible risks and benefits of science and technology, liberals place greater trust in university scientists than conservatives do.

A new study, forthcoming in the journal Public Understanding of Science, contributes to a growing body of psychological research uncovering the mechanisms by which politics and ideology influence people's perceptions of scientists and scientific claims. The key insight is that science isn't understood in isolation, disconnected from other beliefs, values and emotions. Instead, science is assimilated within a web of existing attitudes and beliefs, a core part of which concerns a person's social identity.

Consider a vegan who encounters a study supporting positive environmental and nutritional consequences from following a plant-based diet. Consider a video game aficionado who reads a news story reporting a link between playing video games and aggressive behavior. In the former case, the scientific findings affirm an identity that our hypothetical vegan holds dear: Veganism is great! In the second case, the finding is disconcerting — it potentially threatens our hypothetical reader's identity as a gamer.

The dissonance between a person's identity and the implications of scientific claims can be uncomfortable, prompting some sort of change to either the person's identity or their acceptance of the relevant science. If the identity is highly valued and entrenched, it's the science that's more likely to go. Indeed, prior work finds that when a scientific result threatens a person's strongly held identity, they're more likely to question the science and methods involved and to become more rather than less certain of their views.

The forthcoming study, authored by Peter Nauroth and colleagues, goes one step further in testing whether scientific findings that threaten a person's identity lead not only to greater rejection of the science, but to a shift in the person's perception of the scientist who conducted the research. And indeed, they find this is so: Participants who read about a scientific study that posed a threat to their identity rated the scientist who conducted the study significantly less competent and reputable than did participants in a control condition. The study also found that a threat to identity influenced participants' perception of scientific consensus: Participants who read about a scientific claim that threatened their identity were less likely to think that the claim represented the predominant opinion in the scientific community.

The new study, which reports data from 138 German university students, departs from most prior research on laypeople's perceptions of science in using social identities that were experimentally induced in the lab. Participants first completed a task that identified them as having a "holistic association style" as opposed to a "detailed association style," and the scientific research they went on to read suggested that associate style was or was not predictive of prosocial behavior. In the condition designed to threaten social identity, for example, they read that those with a holistic association style were found to be less prosocial than those with a detailed association style.

That these novel and somewhat arbitrary identities had consequences for how participants evaluated the subsequently presented science suggests that real-world identities — which are typically more meaningful and entrenched — could have even larger effects. For instance, a study concluding that conservatives are more easily disgusted than liberals, or that people who follow Democrats on Twitter are more likely than those who follow Republicans to use swear words in their tweets, could be evaluated quite differently by readers on different sides of the political aisle. This could lead them to draw different inferences about the quality of the research, the competence of the researchers and the level of consensus in the scientific community.

Fortunately, most of the research that informs policy isn't about social identity. Studies of energy use and environmental impacts, for example, are unlikely to compare conservatives versus liberals. Studies of educational or health outcomes rarely focus on differences across Democrats and Republicans. Yet scientific claims that become associated with political positions — like anthropogenic climate change — can also become threats to political identity. And that broadens the scope of cases for which partisan politics can skew the perception of science.