Accessibility links
Climate Change, Waste And Our Choking Seas : 13.7: Cosmos And Culture When we fill up our garbage cans, we empty them into bigger ones. The biggest one, we seem to think, is our planet. We can't keep on filling it thinking it's a bottomless pit, says Marcelo Gleiser. 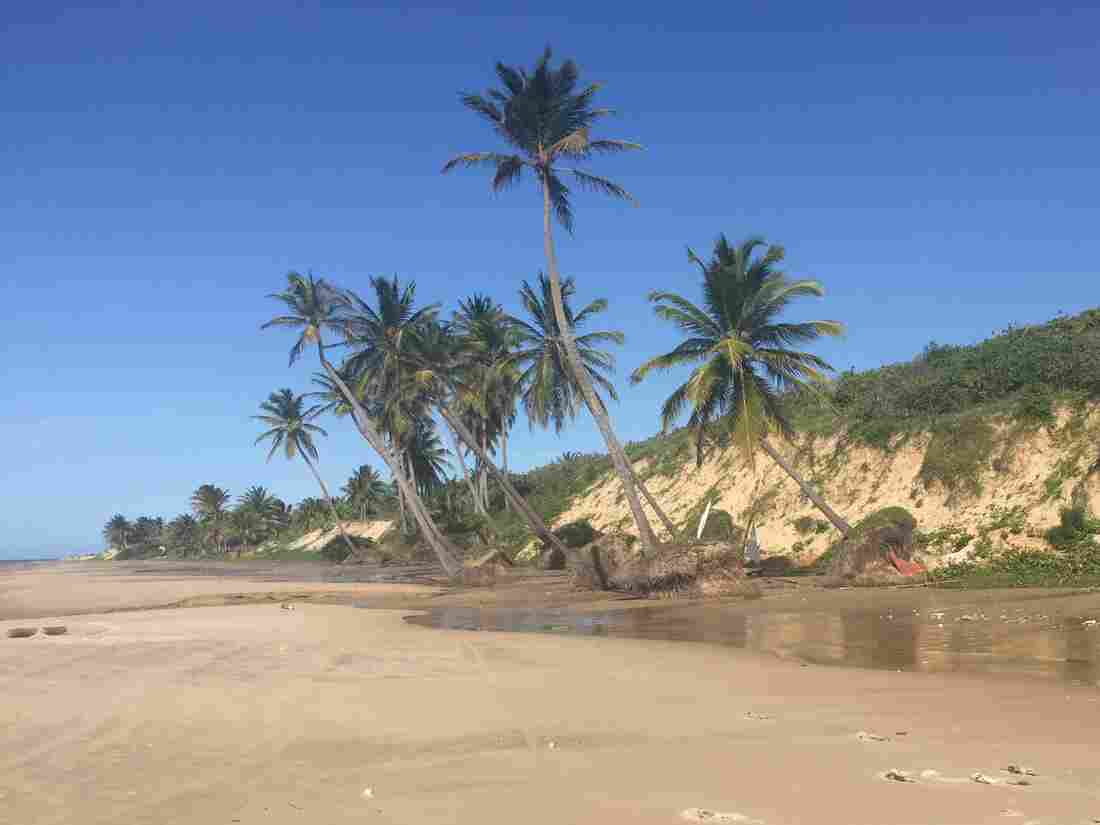 Felled coconut trees littered with bottles and other garbage on the Brazil coast. Courtesy of Marcelo Gleiser hide caption 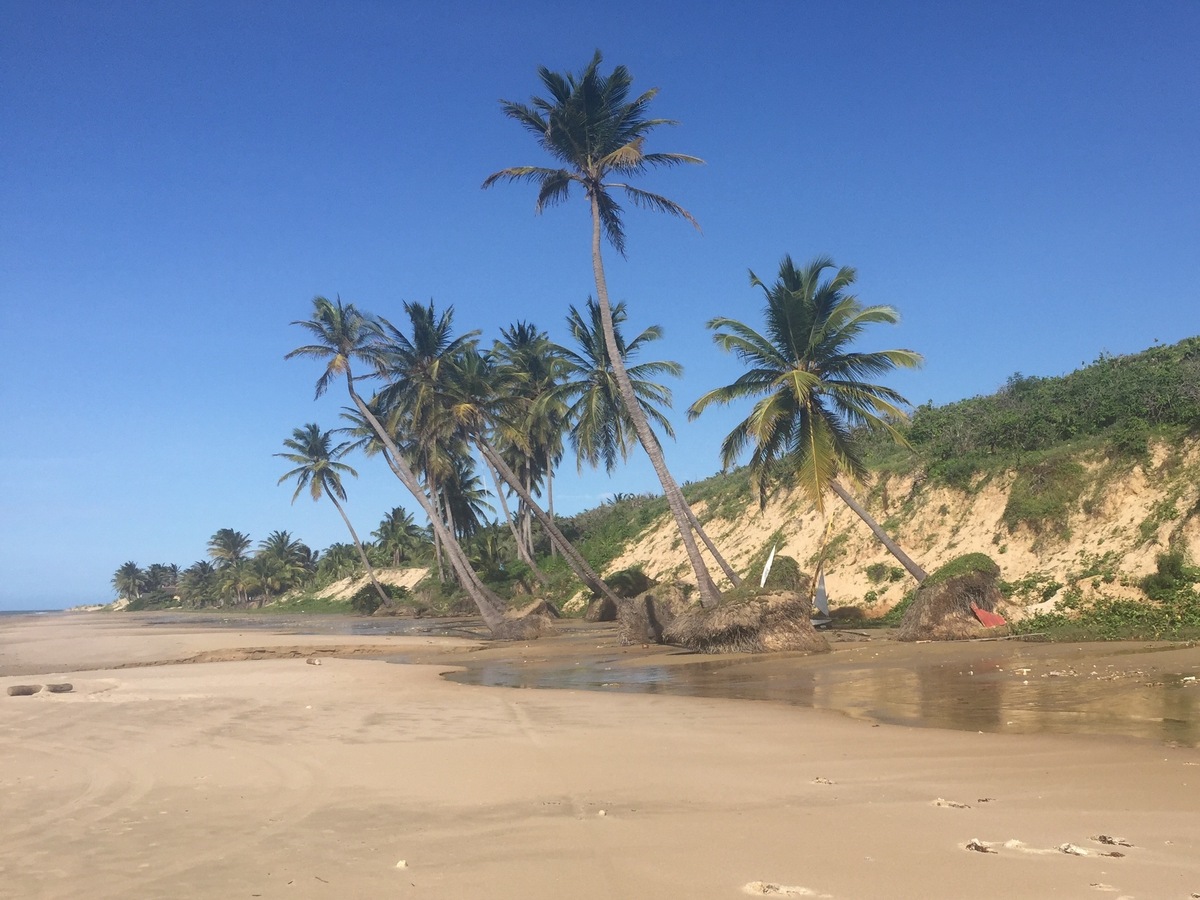 Felled coconut trees littered with bottles and other garbage on the Brazil coast.

I spent last week's Spring break with my family in a remote spot on the Northeastern coast of Brazil.

It's so remote, in fact, that there are no access roads to speak of: To get there, you drive about 200 miles from Fortaleza, the capital of Ceará state, and then tackle the last 25 miles or so on very rough, sand roads. Only dune buggies and very sturdy 4x4s can get there. Or the local donkeys. We chose to take the "beach road," which meant some 50-plus miles of spectacular, coast-front driving. On the way, only remote fishing villages and many river crossings.

To an certain extent, it was. However, two things jumped out to show their ugly faces and partly spoil the fun.

First, plastic bags and bottles of all kinds and shapes littered the vast expanse of flat beach front. Along the way, we saw the huge carcass of a sea turtle. I asked the driver, Marquinho, about it. "Oh, she's been there a while now; swallowed plastic and choked to death," he said.

Of course, we all hear about such things. But witnessing it is different. It jolts you in a bad way. I wondered how many others had died, or were dying; how many dolphins, whales, and all sorts of marine life are being compromised by civilization's refuse. (The answer is easy to find: more than one million seabirds; 100,000 sea mammals; and so on. If we include fishing nets, 300,000 dolphins and porpoises die per year.)

The numbers are horrifying. Each year, enough plastic is thrown away to circle the Earth four times. The average American throws away some 185 lbs. of plastic per year. Only five percent of the plastic we produce is recycled.

Marquinho continued: "People that live upriver dump their garbage in the water thinking it magically disappears. It all washes up along the coast though. And the worst is that you can find plastic from Europe and Africa, too. It's not only from around here."

The oceans are choking on garbage and land-based pollutants such as oil, septic tanks and farming refuse.

This was the first downer.

The second was no less worrisome. As we cruised along the coast, Marquinho pointed to hundreds of felled coconut trees where the beach meets the land.

"What's happening here?" I asked. "Oh, the sea is advancing on the land very aggressively around here. These trees were all fine and healthy a couple of years ago. But now, the beach is eating up the land and the trees can't survive," he said.

Although one must be careful not to associate isolated events to global warming, this one seems pretty clear. With rising sea levels, very flat beachfronts such as this whole coastal area will be among the first to get flooded. It's not so different from the Maldives, predicted to be underwater by the end of this century.

So, as they say around these parts: Come visit before it's all over. Unless a global awareness campaign controlling garbage and refuse dumping in the oceans takes flight big-time, the situation aims to get worse, not better. As for climate change, well, we have written extensively about it in these pages.

Being an optimist, I still think we have a shot at slowing down the current trend through science education and political activism. It starts at home and in our schools, and it embraces our communities. The point is quite simple, really. Our planet is big but limited, its resources and ability to absorb our overwhelming presence stretched to the max. When we fill up our garbage cans, we empty them into bigger ones. The biggest one, we seem to think, is our planet. We can't keep on filling it thinking it's a bottomless pit. It's already overflowing and natural life is choking to death. How far does this need to go before we take action?

Producing less garbage at home and using biodegradable materials is a good start. True — expensive still. But as more people opt for using it, the prices will go down. In the end, it's about the economy as always. A little sacrifice by those who can afford it goes a long way. For those who can't, we can press our governments and corporations to develop a more ethical policy toward the environment. Sure, it's been here a long time, and many non-profits have this as their mission. The dead turtle and the felled coconut trees are the signature of what's happening right under our noses.

Nature is saying, "Enough." Are we that deaf to it?