Is It Time For The Cowboy Monkey Rodeo To Go Extinct?

Is It Time For The Cowboy Monkey Rodeo To Go Extinct? 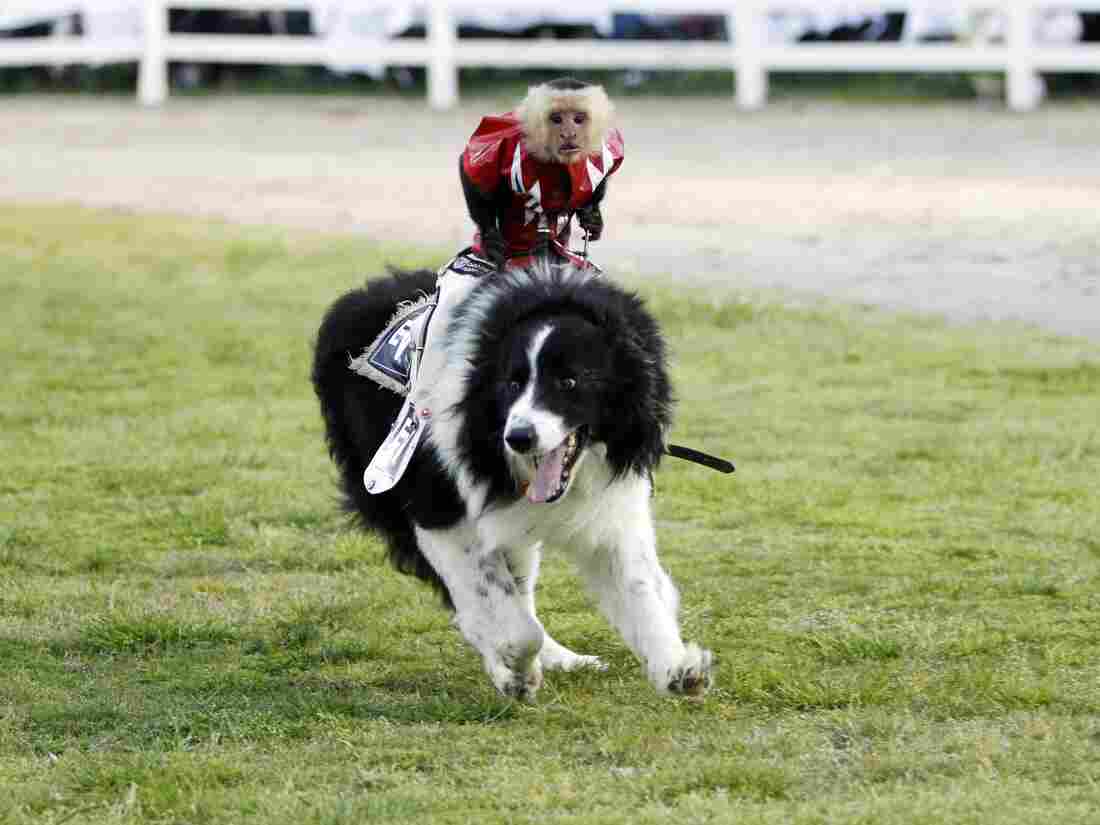 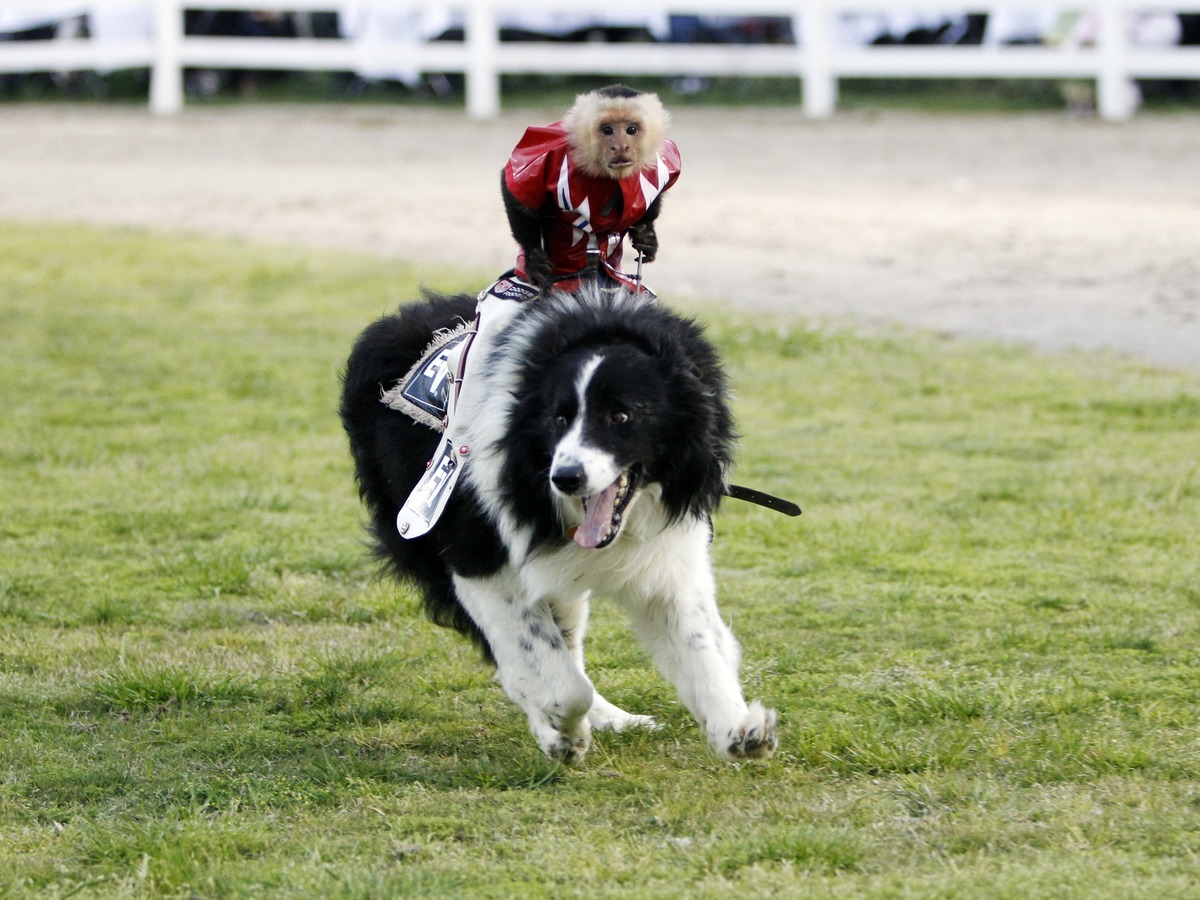 There's an entertainment act that's showing up at Minor League Baseball games in which border collies take the field with capuchin monkeys strapped onto their backs.

Together the dog-monkey teams race at speeds up to 30 miles per hour — chasing after sheep — to applause from spectators.

The cowboy monkey rodeo spectacle has been called "an American sensation" and "a wildly popular entertainment act."

But how do the animals involved feel?

A coalition of animal-welfare organizations hoping to see the practice stopped says it is anything but fun and games for them.

"Monkey rodeos are nothing more than star-spangled animal abuse. What is most cruel is the force necessary to make the rodeos possible. Monkeys are normally inquisitive and independent. It is highly unnatural for them to be dressed in clothes and strapped to the back of another animal, and for what? For a few minutes of base 'entertainment'? These monkeys have no choice but to literally go along for the terrifying ride."

Julia Gallucci, a primate expert at PETA, also weighed in via email:

"This type of event is extremely stressful for all the animals involved. Capuchin monkeys are notoriously high-strung. They are easily stressed and undoubtedly experience trauma as a result of being repeatedly jerked back and forth at high speeds while strapped to the back of a dog in front of a screaming crowd."

You can briefly spot some of that high-speed jerking in this video shot at a Harrisburg Senators baseball game in 2012.

Further, Fleury told me, when monkeys are used in entertainment acts like these, they are separated at an early age from their mothers to make the training process easier. This breaks a significant emotional bond much too early.

A fact sheet prepared by the Humane Society of the United States about the monkey rodeos points out the risk to the monkeys of of neck injuries and notes (in agreement with NAPSA and PETA) that the baseball spectators may face risks of their own:

"During 'cowboy monkey' events, the monkey is not under the control of a handler. The public would be at risk if a monkey got loose from the dog or if a dog became startled, frightened, or distracted and charged off the field. Primates can inflict severe injuries and transmit deadly diseases."

So why does Minor Baseball League allow this sort of thing to go on at some of its games?

Jeff Lantz, Minor League Baseballs's senior communications director answered via email: "Out of our 160 teams, I am only aware of two that are hosting the Cowboy Monkey Rodeo (the Wilmington Blue Rocks and the State College Spikes)."

With help from Fleury and Gallucci, however, I discovered that a quick search of team schedules for the upcoming season shows cowboy monkey rodeos booked not only by the Wilmington Blue Rocks and the State College Spikes, but also the Harrisburg Senators, Frederic Keys and Erie Seawolves.

Lantz also sent me an Aug. 2016 statement released by Minor League Baseball President and CEO Pat O'Connor, who had this to say:

"Minor League Baseball neither supports nor encourages the practice of using animal acts of any kind, especially animal acts for which the Humane Society has expressed serious concerns, to entertain our great fans. We encourage clubs to ensure that the promotions they host do not endanger the health or safety of any animal, but respect the rights of our teams to make decisions regarding their promotional events at the local level."

Following up from there, I asked Lantz why Minor League Baseball doesn't discourage or even sanction teams that employ monkey-rodeo acts, given the harms and dangers. He replied:

"Unfortunately, we are unable to legislate against things that we may find to be in poor taste. These clubs that continue to host this promotion are well aware of the potential for protests and backlash at their ballparks from animal rights activists."

I also reached out to one of the monkey-rodeo groups called Team Ghost Riders, headed by a man called Tim "Wild Thang" Lepard. A response coming via Facebook message said the monkeys are kept with their mothers, a claim that I cannot verify. The response also stated that the monkeys are not strapped in because they can be "taken off" in front of the crowd — a comment that underscores what's evident on the video, that the monkeys are secured on the dogs and cannot get off on their own. I was distressed to learn from the response that one monkey had been participating in the Team Ghost Riders rodeo for 26 long years. "We love our animals. And the real people can tell you that," the response said.

Though Minor League Baseball games are the major venue for these shows, the acts are sometimes invited to games by other, unaffiliated baseball teams or, as this Chicago Tribune article points out, to county fairs.

Importantly, though, let's be clear: Wherever they take place, the monkey rodeos aren't a concern for animal activists alone, but also for a wider network of people who just care about the well-being of animals. Gallucci said: "PETA receives complaints from the public about so-called monkey rodeos almost every time these cruel events take place."

Public backlash, after all, helped to bring to a close the Barnum and Bailey circuses with their performing elephants — and the heat is on Sea World for its performing orca shows.

I think there is already a widespread caring for performing animals. And in the case of the monkey rodeos, this caring will come as more people learn of these events.

Here, then, is one more voice raised on behalf of the capuchin monkeys and the other animals involved in these rodeos, who suffer as we are supposedly entertained. It's time that these events went extinct.