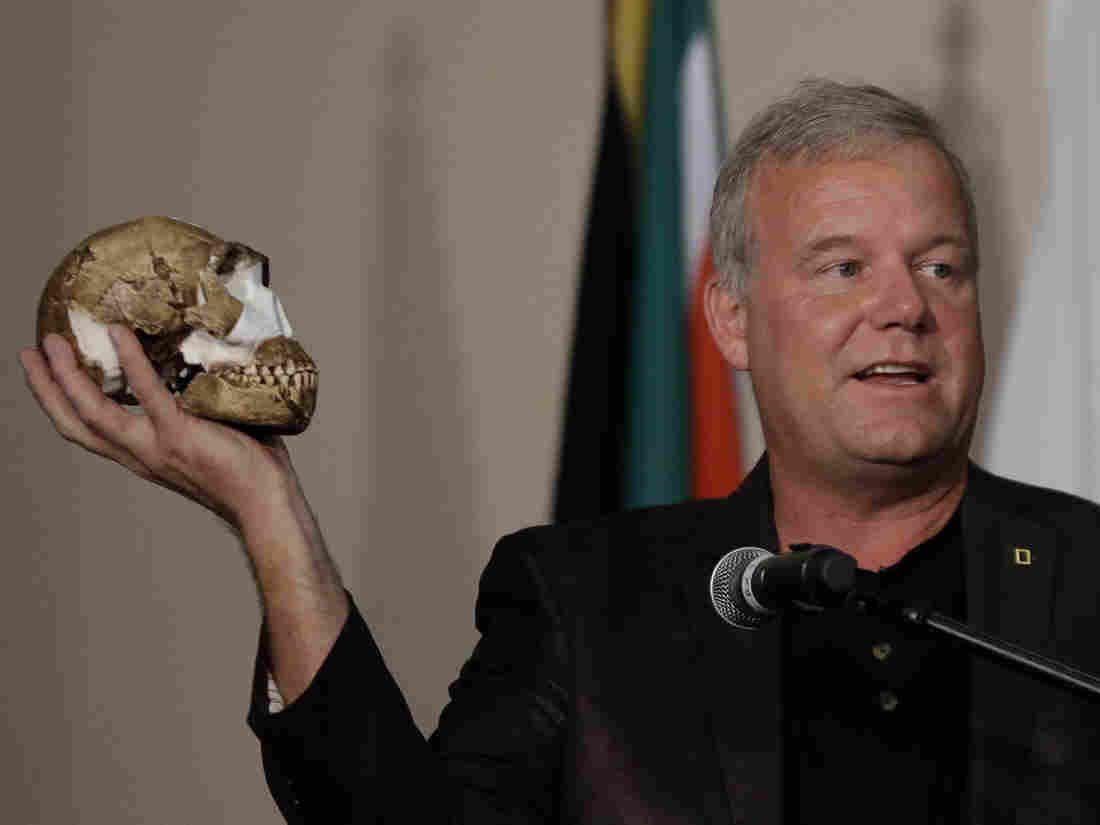 Lee Berger, a professor at the University of the Witwatersrand, holds a reconstruction of the skull of Homo naledi in Magaliesburg, South Africa, on Sept. 10, 2015. Themba Hadebe/AP hide caption 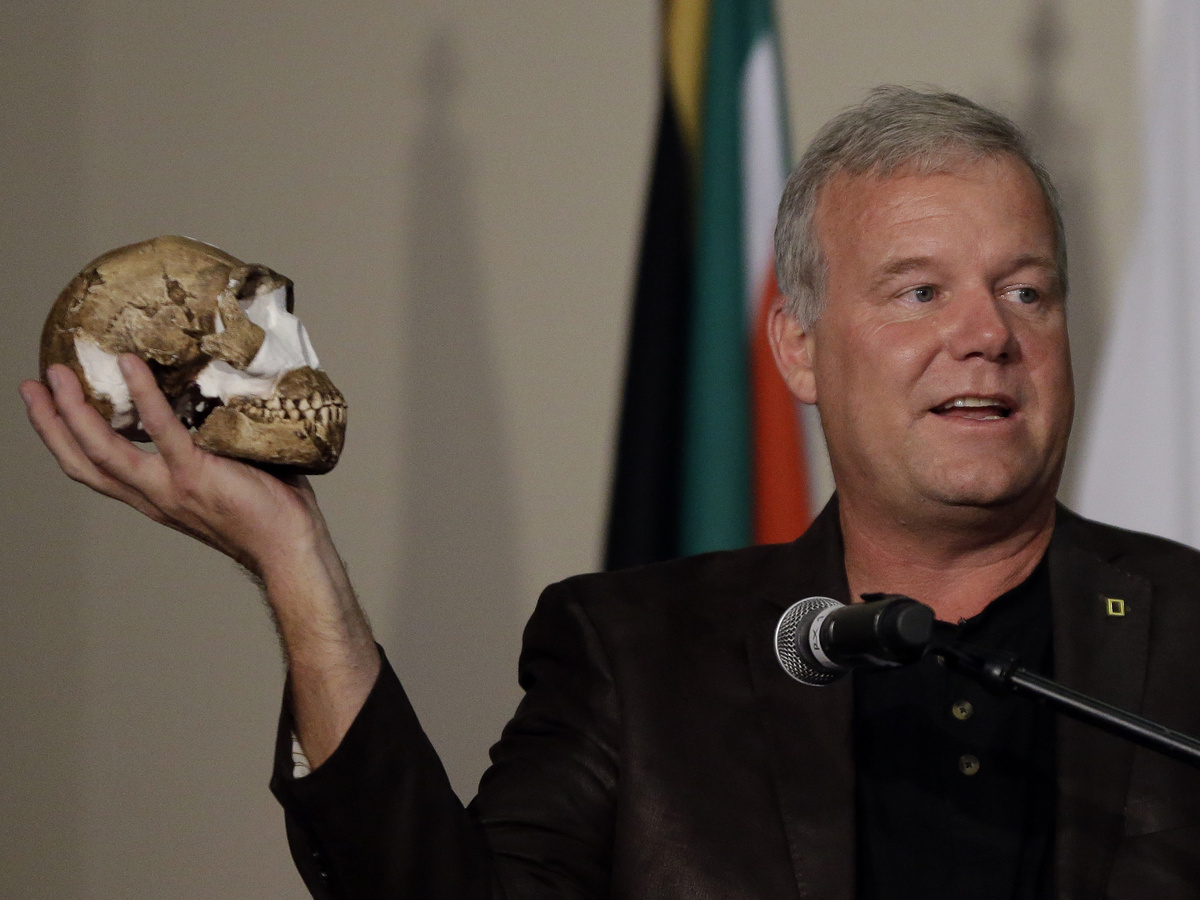 Lee Berger, a professor at the University of the Witwatersrand, holds a reconstruction of the skull of Homo naledi in Magaliesburg, South Africa, on Sept. 10, 2015.

On Tuesday, paleoanthropologists led by Paul Dirks at James Cook University revealed in the journal eLife that Homo naledi, a small-brained hominin found in South Africa, lived — and may have cared for their dead in careful, intentional ways — as recently as 236,000 years ago.

This was, to put it mildly, a surprise. Homo naledi shows an intriguing mix of characteristics — a small brain, curved fingers (apparently an adaptation related to tree-climbing) and certain primitive-looking joints but more modern-looking teeth, hands (except for the finger curvature), legs, and feet. The suspicion, since the fossils were first discovered by Lee Berger of the University of Witwatersrand and his team at Rising Star cave in 2013 (described here in 2015), was that they were perhaps as old as two million years.

As described in the new paper, the far more recent date — somewhere in the range between 335,000 and 236,000 years old — was derived by a combination of six different techniques, including dating of flowstone residues on the cave-chamber walls and ESR, or electronic spin resonance, dating of tooth enamel from Homo naledi. 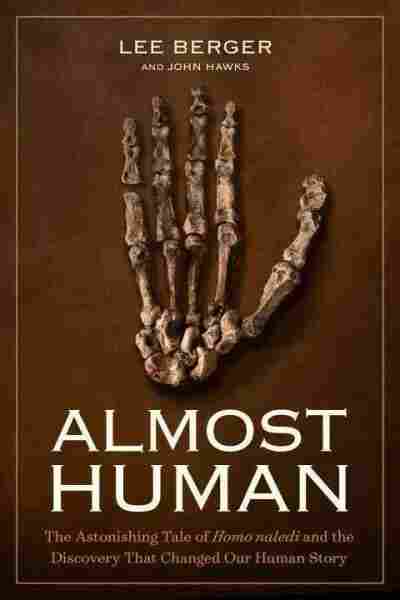 Published on Tuesday in conjunction with the journal article, Berger's new book Almost Human tells the story of Homo naledi's discovery in a deep and inaccessible chamber of the Rising Star cave. The excavation gained fame worldwide for several reasons: 15 hominin individuals were found, the single largest cache of ancient humans ever uncovered in Africa. Plus, the expedition was filmed as it happened — not to mention tweeted and live-blogged — resulting in a joint NOVA-National Geographic documentary that coincided with the first journal publication.

Berger's final chapter focuses on the new information coming out of Rising Star — the excavation of a second chamber with more Homo naledi individuals, the process of coming up with the recent date — and on making a case for intentional "depositing" of bodies as the reason the fossils ended up in the two cave chambers.

Berger could tell early on that the hominin individuals had not been dragged by carnivores or washed by moving waters to their final resting place in the original cave chamber. The excavation of the second chamber has now led him to even more certainty about as to the explanation. Berger writes:

"One thing was certain. No accident, no cave collapse, no death trap... could account for these two chambers, far from one another within one cave system, both full of remains of the same ancient hominins. Granted, it is hard to be definitive as you make the leap between the scientific evidence and your best guess about ancient behavior. But... the best hypothesis to account for these fossils is that Homo naledi used their chambers intentionally as places to deposit their dead."

The upshot, then, as Berger sees it, is that Homo naledi may have carried out quite complex behaviors, despite a small brain and during a relatively recent time period that might have overlapped with our immediate ancestors. (Our own species Homo sapiens is first known from Africa only at 200,000 years ago, so we are "younger" than Homo naledi.)

My own work about response to death is in the area of expressed grief in a variety of animals — not in care-taking of bodies after death. Still, based on what I have learned, I don't think it's out of the question at all that a human-like species with a small brain might have curated its dead in the way Berger describes.

Sarah Wild, writing at Nature underscores, though, that these claims aren't accepted by everyone. Paleoanthropologist Chris Stringer at the Natural History Museum in London told her:

"Although no other satisfactory explanation for the deposition of the remains has yet been proposed, many experts, including myself, consider such complex behavior [burial of the dead] unlikely for a creature with a brain size close to that of a gorilla, particularly when a requirement for the controlled use of fire (for lighting) probably has to be added in."

I truly love this kind of debate and discussion about our past — about the evolutionary trajectory that resulted in this ability to debate and discuss our origins, in a way that no other species does. Certainly, the new date forces us to think hard in new ways. As Sarah Zhang writes in The Atlantic on Tuesday:

"The discovery that another hominin, so different from us, lived as recently as 236,000 years ago adds more mystery to the question of why humans are the only surviving members of this once diverse family....It's still too soon to know exactly how we're related to Homo naledi and why we survived but they didn't. Whatever the answer, it will force us to consider what it means to be human."

Three weeks before the Homo naledi announcement, a team of paleontologists and archaeologists led by Steven Holen of the San Diego Natural History Museum presented evidence from a mastodon site in coastal California to suggest that North America was first colonized by people — perhaps Neanderthals or another ancient species — 130,000 years ago. This, too, was a major surprise; the accepted wisdom had been that people arrived on this continent only about 14,500 years ago.

The heart of the argument in this case rests on dating techniques — and on the way the thick mastodon bones had been processed with hammerstones and anvils.

In that case, too, intense debates and discussions resulted. Hannah Hoag, writing in Sapiens magazine, notes:

"Many experts remain unconvinced. [David] Meltzer [of Southern Methodist University] and others say it doesn't show that people were the only force that could have fractured the bones and modified the stones. [John] McNabb [at the University of Southampton] points to the lack of corroborating tools, such as well-made stone tools like flakes or scrapers, which are typically found at butchery sites of the same age or older.

In both cases — with Homo naledi and with the California mastodon site — that fierce scrutiny both during and after peer-reviewed publication is exactly how it should be.

If both studies hold up, they represent dizzying changes to our understanding of our own evolutionary trajectory.