Accessibility links
What Goes On In the Minds Of Spiders? : 13.7: Cosmos And Culture Think twice before crushing that spider that startles you. Its little brain may be up to some pretty fascinating things, says anthropologist Barbara J. King.

What Goes On In The Minds Of Spiders?

What Goes On In The Minds Of Spiders? 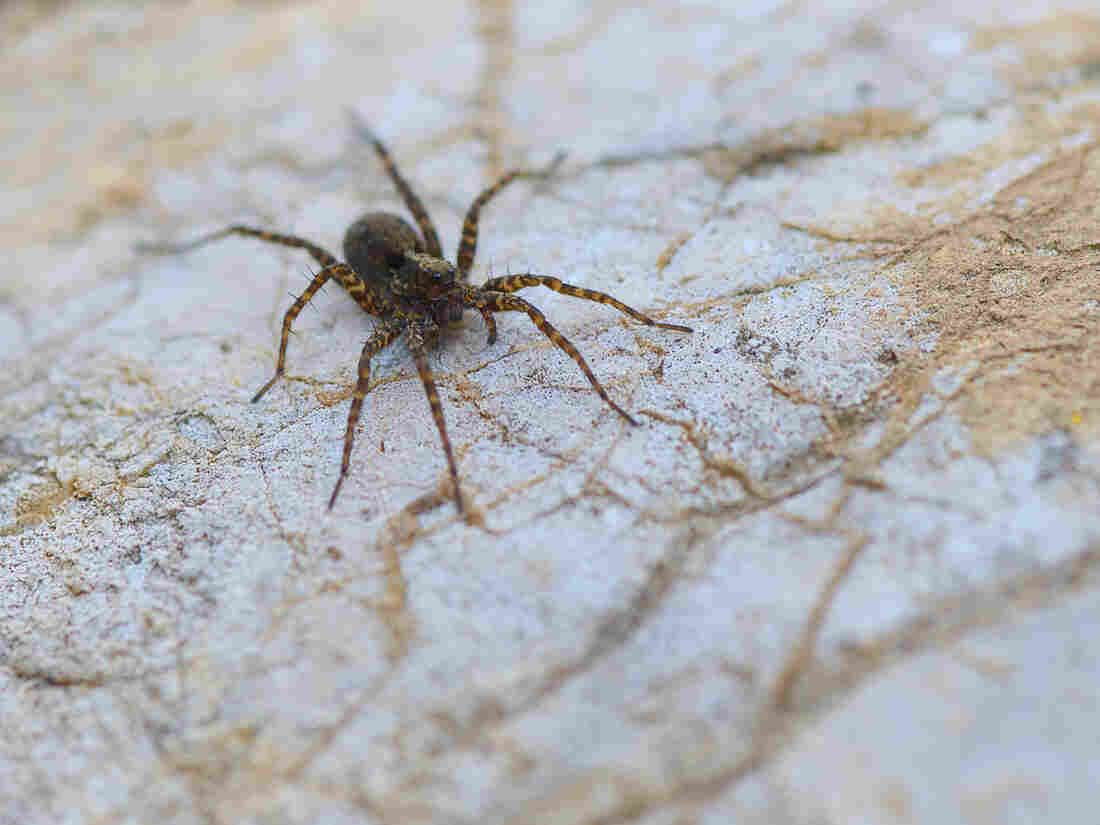 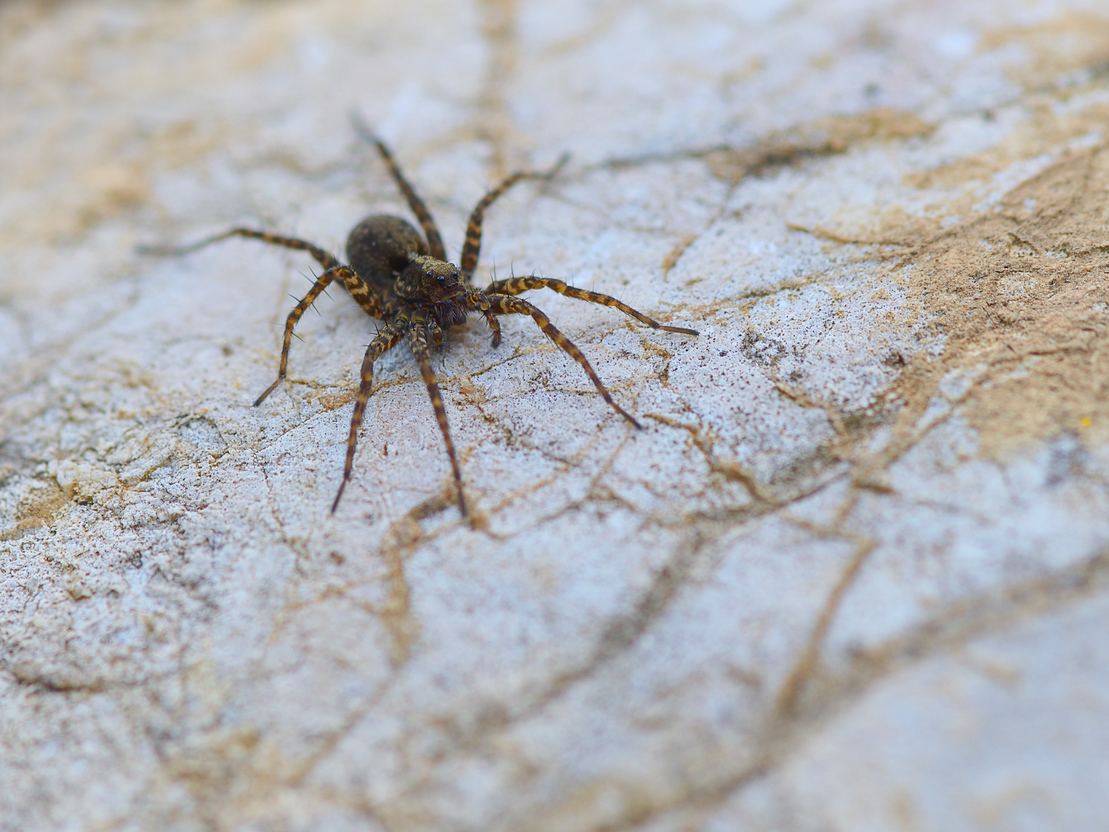 There are some very cool projects going on in spider science these days.

In one study, jumping spiders are induced to climb small viewing towers to contemplate experimentally manipulated images of prey. In another, wolf spiders are invited to assess visual and vibratory signals, digitally altered in various ways, that represent qualities of their potential mating partners.

Innovative methods are being used to ask the question, "What goes on in the mind of spiders?" The results suggest that the answer is "quite a lot."

Fiona Cross and Robert Jackson at the University of Canterbury in New Zealand discovered that jumping spiders of the species Portia africana display a sort of numerical competence.

Cross and Jackson's paper in the journal Interface Focus, from the Royal Society, explains that these spiders of the family salticidae, which hunt other spiders for food, were "proficient at distinguishing between numbers of prey in the range of 1-3, but apparently not proficient at making the discriminations 3 versus 4 or 3 versus 6."

A Spider Across The Room Can 'Hear' You, Study Finds

How that conclusion relates to mental representation, the ability to hold symbols or images in the mind about one's world, is the most intriguing part of this research.

Cross and Jackson set the spiders up with two towers, with little viewing screens at each. At the first (the starting tower), the spiders saw scenes of prey from the genus Argyrodes -- also spiders — that they quite commonly eat.

"As the number of Argyrodes individuals in a single web tends to be highly variable," Cross and Jackson write, "this particular prey might especially often present Portia with situations in which numerical cognition would be relevant."

At the second tower (the viewing tower), the spiders saw a different number of the same kind of prey. (In the control trials, they saw the same number.)

The spiders' behavior in the experimental trials showed evidence of "expectancy violation" — that is, their behavior differed in terms of movement and timing between the two towers in ways that suggested they didn't see at the second tower what they thought they were going to see.

The spiders, for example, looked longer at the second tower when the prey number displayed there differed from the number at the first tower — echoing (in broad outline) what happened when a similar approach was used in earlier research with a variety of nonhuman primates.

Here's how Cross and Jackson explain their key finding:

What terrific spider science! It tells us something truly interesting about these jumping spiders, beloved to many including as pets, I recently learned.

"How an animal with such a small nervous system can do all this should keep us awake at night," Cross and Jackson told Joshua Sokol in May's Quanta Magazine.

George Uetz of the University of Cincinnati, and his co-authors Brent Stoffer, Madeline Lallo and David Clark, are equally impressed with their own spider study subjects, wolf spiders, Schizocosa ocreata. Uetz's team published an article in March in Animal Behaviour showing that female wolf spiders respond in complex ways to signals emitted by males that are potential mating partners.

Uetz and his colleagues tested female spiders using a playback method, where the females saw on video a range of digitally altered visual signals related to males' leg tuft size, or, via a substrate, felt vibratory signals related to amplitude in the males. The signals were presented either alone or in different combinations.

I asked Uetz by email to discuss the significance of the results. He replied, in part, this way:

"By using both vibratory and visual playback techniques, we demonstrated that females showed ordered preferences for males with louder vibratory signals and larger visual signals — both when each modality was isolated and when presented as a full multimodal signal.

However, female preference changed based on which males were simultaneously presented, suggesting that comparative evaluation of alternatives is a factor in decision making by this species."

Spiders make decisions! Of course, I already knew that on some level; it has been clear to me for a while that spiders and many insects don't act based only on instinct but, instead, probe their world by learning things and thinking in some way about them.

But this pair of experiments brings the point home sharply, as Uetz underscored for me regarding his wolf-spider experiments:

"Interestingly, when conflicting cues were presented alone, females weighed them equally, but when given a choice (conflicting cues presented simultaneously), females weighted the visual signal more heavily. Thus, the presentation context affected their relative preference, suggesting that comparative evaluation of alternatives is involved."

Uetz told me that his whole team is:

"impressed that these tiny animals have far more capacity for complex (and subtle) communication and decision-making abilities than we ever gave them credit for. Given the plasticity of responses we have seen in these (and other) experimental studies, I suspect some level of cognition must be involved."

Cognitive spiders: We're finding out amazing things about them all the time — like how jumping spiders can hear us from across the room.

And I, myself, have tended toward spider-science geekiness for a while now, writing here about arachnid abilities in virtual-reality worlds.

I can't wait to see what spider scientists come up with next.