Accessibility links
What Are Our Best Clues To The Evolution Of Fire-Making? : 13.7: Cosmos And Culture Fresh thinking about primates' attention to fire points to a gradual evolution of fire-making skills, says anthropologist Barbara J. King. 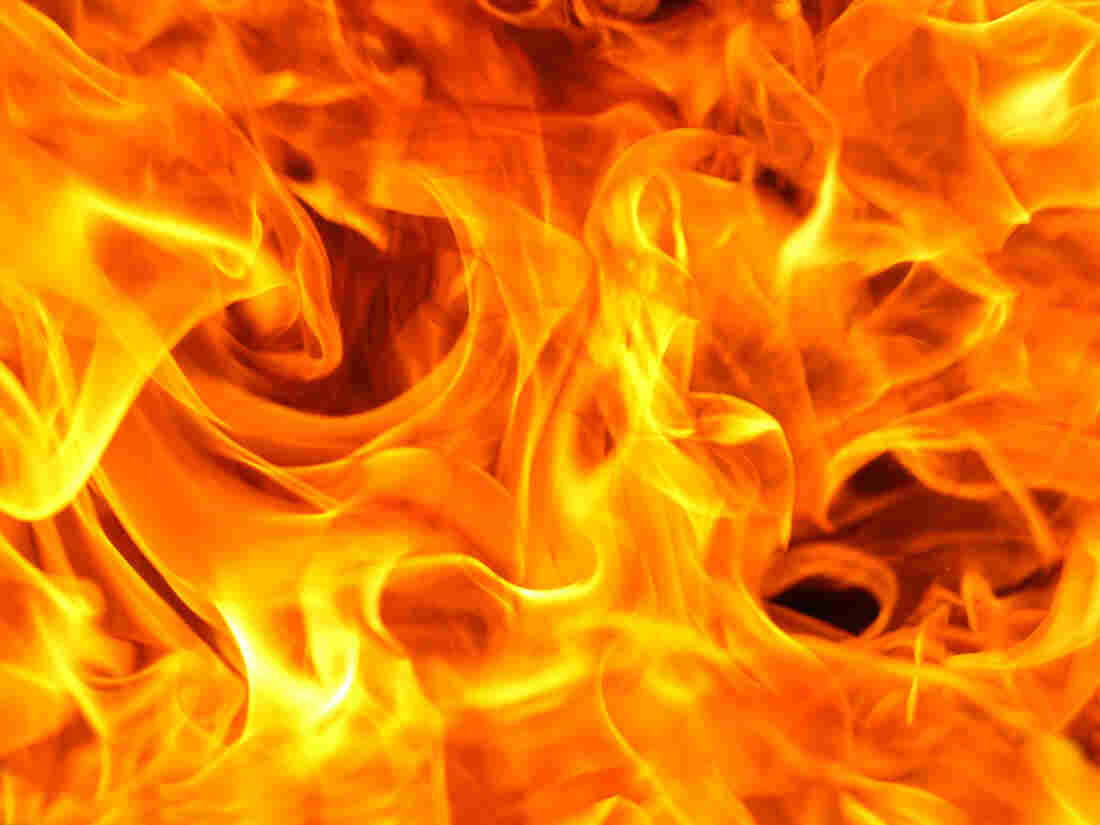 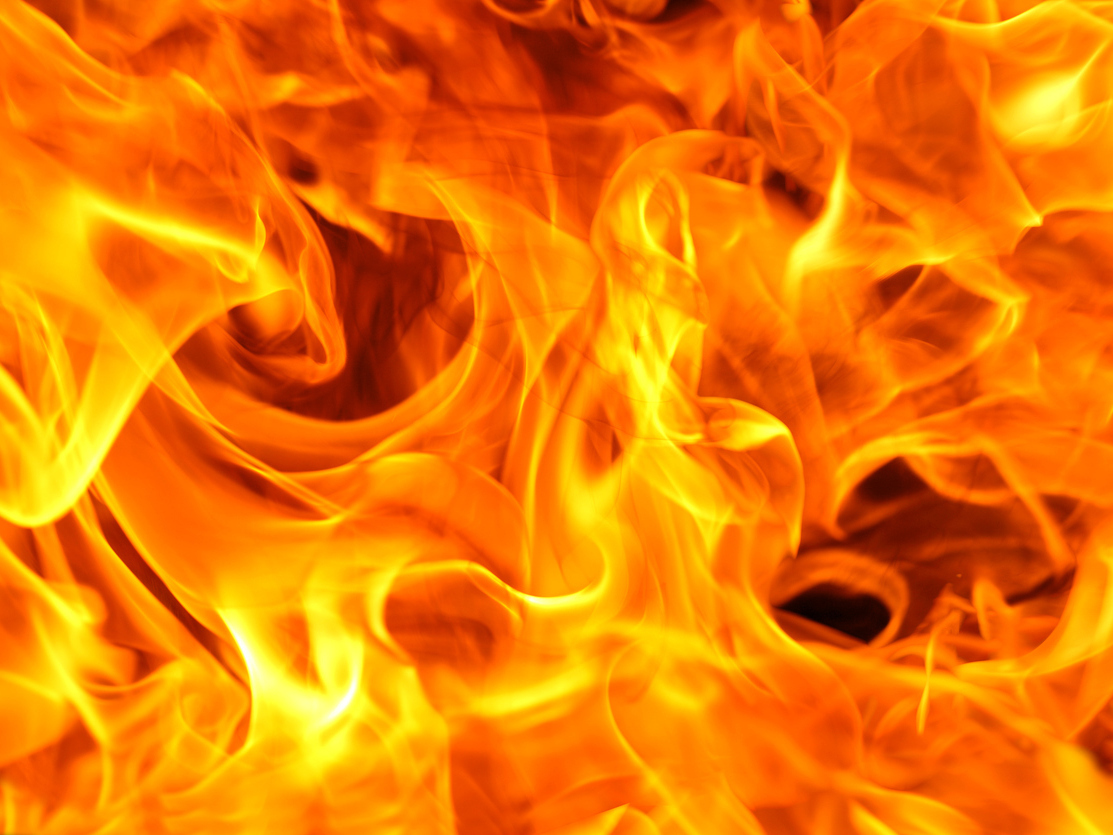 Remember the movie Quest For Fire?

It's an iconic Hollywood moment: Ancient humans discover how to make fire. It happens pretty quickly, and there's a chase scene — starring a saber-toothed tiger — to heighten the suspense.

Off the big screen, though, evolutionary changes, including cognitive-behavioral changes that would underpin our species' control of fire, often happen in fits and starts over lengthy periods.

In papers just published in a supplement to the journal Current Anthropology devoted to human evolution and fire, we see just how lengthy that process may have been.

In his contribution, "Identifying and describing pattern and process in the evolution of hominin use of fire," Dennis Sandgathe of Simon Fraser University notes that it's quite challenging to distinguish between the archaeological signature of fire use by our early ancestors and that of naturally-occurring fires:

"The probability seems vanishingly small that the location of any open-air Early Stone Age-Lower Paleolithic site would not have natural fires pass over it at least once (and probably many times) in the period of time since its deposition. If the site is not too deeply buried, artifacts and bones can be altered by the heat of a passing natural fire, and charcoal and ash from natural fires can be introduced into the site sequence."

In other words, what looks like evidence for human use of fire may actual be evidence of a natural process.

"Even in cases where it seems very clear that the fires were the result of hominin behavior, there still remains the possibility that they acquired the fire from natural sources and did not create it themselves. This possibility seems to be consistently overlooked, underappreciated, or simply dismissed out of hand."

While acknowledging the possibility that the site of Gesher Benot Ya'akov in Israel indicates the first repeated fire use by our ancestors at around 800,000 years ago, Sandgathe concludes that "the earliest unquestionable examples" of continuous, long-term fire use come later, between 350,000 and 200,000 at the cave sites of Hayonim, Qesem, and Tabun, also in Israel. There, hearths and burned lithics occur in such abundance as to reasonably preclude other explanations. Sandgathe notes, however, that "continuous" doesn't necessarily mean "habitual," that is, "there may still be decades, centuries, or in some cases even millennia between fire-use events."

We can, Sandgathe says, take the date of 400,000 years ago as a kind of milestone in our ancestors' use of fire. But even then, fire use wasn't anything like a key behavioral adaptation for a long while, as he explained to me via email:

"The current evidence does suggest that, while there may have been rare, isolated fire-use events prior to 400,000 years ago, no hominins were regularly using fire prior to this and, in fact, it seems pretty clear from my (and colleague's) research that at least some Neanderthal populations in Europe were not regularly using fire as recently as 50,000 years ago and perhaps even later...[Fire use] continued to be intermittent, opportunistic, involve the exploitation of natural fire sources, and was not an integral part of any hominin adaptations until sometime after 50,000 years ago."

A non-human primate model may help us understand the evolution of fire behavior, too. Jill Pruetz of Iowa State University and Nicole Herzog of the University of Utah in their paper Savanna Chimpanzees at Fongoli, Senegal, Navigate a Fire Landscape explain why Fongoli is an unusual site for wild chimpanzees: There, in a savanna-woodland setting with environmental pressures quite similar to those our early ancestors may have faced, chimpanzees encounter wildfires quite regularly, some extensive in size. This situation sets the Fongoli chimpanzees apart from all other habituated chimpanzees who live in forested environments where fire is rare.

The Fongoli fires are mostly anthropogenic, set by people in order to clear land for cultivation or to make hunting, or even just walking through the grassland, easier. But those fires impact the chimpanzees' daily lives, too.

The data collection that Pruetz and Herzog carried out shows, first, that the Fongoli chimpanzees spent more time foraging and traveling in burned areas compared to unburned areas. That's smart thinking on the apes' part, because it's an efficient use of their energy. Second, the primatologists conclude that the apes "can accurately predict the leading edges of fire and assess other aspects of fire behavior" such that they seem to be quite unconcerned with smoldering fires or even early flaming fires, but avoid more serious fires.

Pruetz, via Messenger app, described for me a memorable experience she had a few years ago at Fongoli that highlights chimpanzees' fire knowledge:

"I almost violated my own rule of 'follow the chimps' when we're in close proximity to a wildfire. The three adult males I was following first skirted the fire but then watched it for some minutes and went down into the ravine it was moving through. I thought we'd all be burned up and almost turned around but found that they'd crossed a spot in the ravine where there was still some green vegetation at the bottom, and the fire died out there and moved around while we quickly crossed. Note to self: Don't doubt the chimps!"

Writing in Current Anthropology, Pruetz and Herzog conclude that the chimpanzees "appear strategically to use burned landscapes and exhibit cognitive abilities necessary for interacting with wildfires, which tentatively provides support for the early fire-use theory."

Here we have a key insight about our own past: In the periods before the confirmed, repeated fire use that Sandgathe pinpoints, our ancestors may very well have understood fire and incorporated the effects of fire into their normal routines in intelligent ways. The process of fire manufacture and control would then have evolved quite gradually.

Sandgathe himself concludes something that aligns beautifully with the primatologists' perspective. He writes in Current Anthropology:

"In some regions (and time periods) high frequencies of natural fires may have provided some hominin groups with constant, reliable access to fire, limiting any pressure to develop fire-maintenance techniques or fire-manufacture technologies."

Not as sexy, perhaps, as Quest For Fire — but good solid science.

As the headline to a recent post of mine here suggests, new evidence in human evolution is being announced at a "dizzying" rate. Just last week the news broke that, based on fossil finds from Morocco, our species Homo sapiens may be over 100,000 years older than we thought.

Often though, the slow-and-steady, behind-the-headlines work — such as that discussed in the Current Anthropology issue on fire — is where advances in paleoanthropology come.