Accessibility links
Clinics Aim For Fear-Free Vet Visits For Nervous Pets : 13.7: Cosmos And Culture Reducing dogs' and cats' stress levels at the vet is getting a big push in a new movement within veterinary medicine, says anthropologist Barbara J. King. 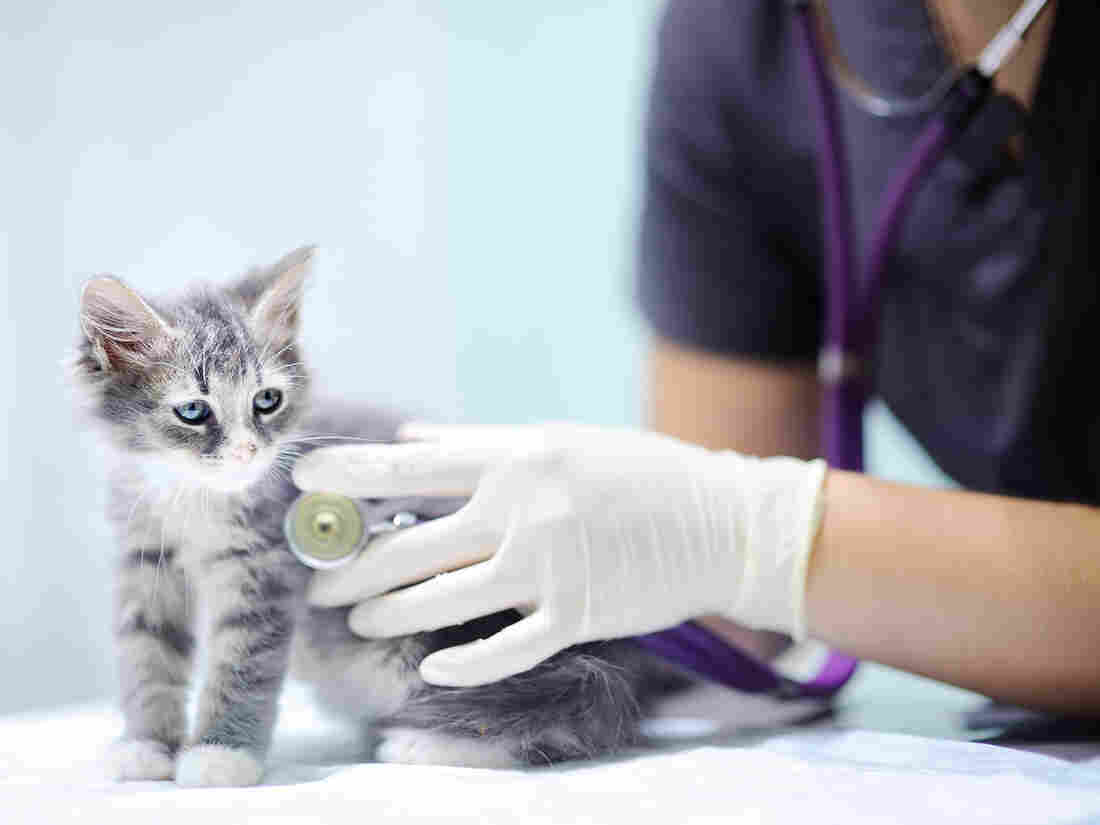 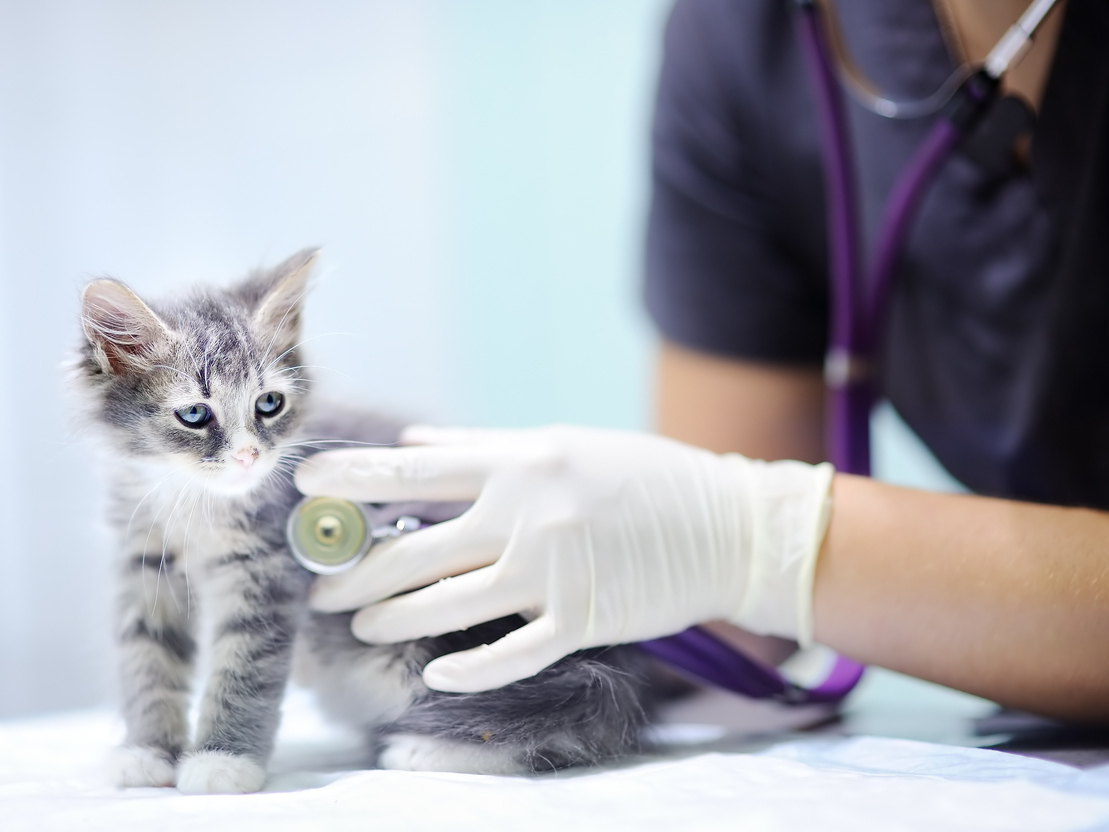 One busy morning at the Seaford Veterinary Medical Center in Yorktown, Va., two cats brought in by their owner waited in their carriers in the lobby because all of the exam rooms were filled with animals.

These two were nervous creatures, what the center's hospital director, Lowrey Reynolds, told me are termed "red zone cats" — distinct from the more moderately distressed "yellow zone" or laid-back "green zone" cats. In the past, these cats have required anesthesia just to get through a veterinary visit.

Now, the cats' stress levels were ramping up, especially owing to the presence of dogs near them in the lobby. For cats and dogs both, stress isn't just unpleasant, it exacerbates illness or trauma and, in some cases, can cause enough havoc with the body's physiology to skew test results.

A staff member at Seaford brought out towels sprayed with a product called Feliway that mimics the pheromone that cats leave behind when they rub their cheeks on people and objects. Feliway, Reynolds explained, essentially "marks objects and people as safe" in a cat's environment.

Once the towels were draped over the cats' carriers, the nervous pair calmed — in fact, according to their owner, they were calmer than ever before at the vet.

Some red-zone cats might also be given the sedative gabapentin, either in the clinic or beforehand at home. Dogs might be offered Adaptil, a product that mimics the security pheromone a mother dog gives off after birthing her puppies. Whole rooms get sprayed with pheromones, as does equipment like stethoscopes. And the staff pretty much sprays itself continuously through the day, so that they too are "marked safe."

All these interventions are part of the Fear Free pets program launched in April 2016 by veterinarian Marty Becker to help cats and dogs cope better when a visit to the vet clinic is necessary. Seaford's Reynolds is now one of the 8,000 Fear Free certified professionals in the U.S., as are four others on the vet team there.

"When a cat or dog comes into the clinic, I think of it in human terms as being abducted by aliens," Reynolds told me. "Everything is foreign, nothing makes sense, nothing is natural."

The goal of Fear Free is to keep the degree of stress as low as possible, to prevent it from expanding to outright anxiety or fear. As counterintuitive as it may sound, this hasn't always been the approach adopted.

"Vet schools do a great job at teaching medicine, anatomy, and physiology, and how to fix a broken bone and do surgery," Reynolds said. "What is missing is the behavioral aspect or the pet's point of view."

Becker, in an email message to me last week, speaks of the traditional veterinary approach in harsher terms.

"I watched over almost 30 years of veterinary practice as pets were manhandled (actually woman-handled, as the vast majority of veterinary healthcare workers, especially veterinary nurses, are female), manipulated, threatened and abused. I'd noticed pets were exhibiting signs of fear, anxiety and stress (FAS), but like almost everyone else involved with veterinary medicine, thought of it as collateral damage, no big deal really. Wrong!

It was in 2009 that I heard a boarded veterinary behaviorist, Dr. Karen Overall of the University of Pennsylvania College of Veterinary Medicine, talk about how FAS during veterinary visits was causing repeat, severe, psychological damage to pets. This damage was not only affecting them emotionally, but physically as well."

At the Seaford clinic, veterinarian Elizabeth Leonard had been using a "minimal restraint" approach all along, but she said things really came together when she encountered Becker's Fear Free approach at continuing-education conferences; the whole clinic became involved. Reynolds, for example, completed the online certification process, consisting of eight modules with tests following each, after attending the 2017 North American Veterinary Conference in Orlando, Fla.

Reynolds stressed that the Fear Free approach extends beyond the clinic itself, because ideas are shared with cat and dog owners for at-home techniques. Sometimes nothing that's tried at the clinic works on an individual animal, and that animal is sent home with spray pheromones to come back and try again another time. Cat carriers can be left out around the house to become a natural part of the landscape, perhaps sitting out near inviting food or with the top off so that it becomes an intriguing box to investigate. This way, the carrier doesn't suddenly appear as a menacing object that's inevitably associated with a trip to the vet.

By the end of 2017, Becker estimates, over 25,000 veterinarians, veterinary nurses, and clinic staff will be certified in the Fear Free approach.

"Nobody gets in veterinary medicine to make life worse for animals," Becker noted. "Once we had our eyes opened as a profession, we took action to look after animals' physical and emotional well-being."

From my perspective as someone who works on animal cognition and emotion from within anthropology, I see a meaningful link between Fear Free techniques and recent animal-behavior science. Our pets may have profound emotional responses — both positive and negative — to the events in their lives. We can help our cats and dogs a great deal by recognizing this fact and joining with veterinary professionals to act on it.