Accessibility links
Climate Change, Power, Money And Sorrow: Lessons Of Hurricane Harvey : 13.7: Cosmos And Culture Through the power of Katrina, Sandy and, now, Harvey, we get a view into how a changing climate may play out in the real world — beyond arguments and abstractions, says astrophysicist Adam Frank. 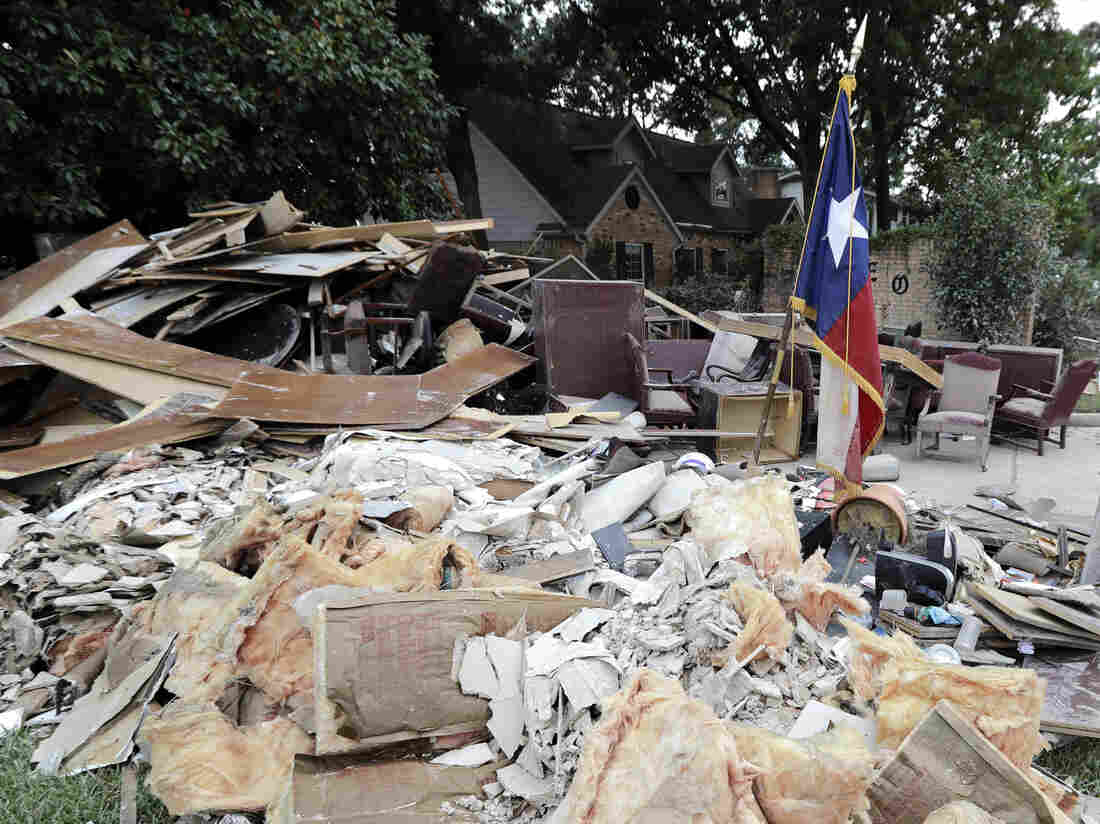 A pile of debris sits outside a business damaged by floodwaters in the aftermath of Hurricane Harvey on Sept. 5 in Spring, Texas. David J. Phillip/AP hide caption 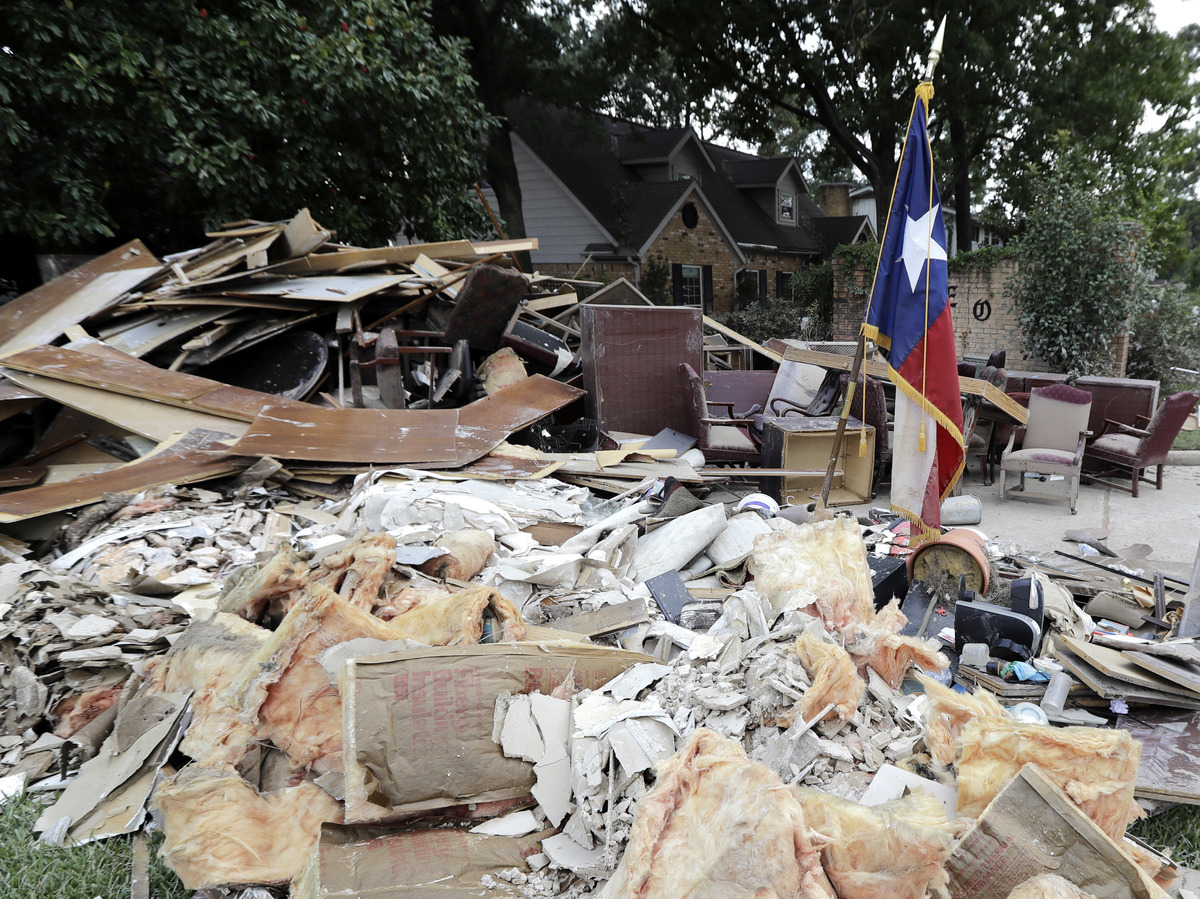 A pile of debris sits outside a business damaged by floodwaters in the aftermath of Hurricane Harvey on Sept. 5 in Spring, Texas.

I get a lot of "climate" hate mail.

Whenever I write a piece on global warming, someone will email to call me a "lie-bra-tard," or something similar, and tell me I should be in jail.

That's what climate change and climate science has become after all these years.

It's just another political football getting tossed around on an already crowded field of political game playing. Immigration, health care, Russian hacking — climate change just gets tossed onto that pile. Then everyone watches to see who has the best zingers on the next CNN or Fox News panel.

But in the wake of Hurricane Harvey we can now see what climate change is really about. It was never about clever arguments but, instead, something much more elemental: power, money and human suffering.

We've all endured endless faux public debates over the question "is human-driven climate change happening?" These were never real debates because the scientific question got answered more than a decade ago. But climate denialists held tight to their positions because they did not, or could not, imagine what is first and foremost at play in climate change: power.

We're not talking here about anything as puny as political economic power. No, climate is about something far more terrifying it its capacities: Climate change is about planetary power.

Now let us be clear (and the point of science is to be as clear as possible): There is still uncertainty on how climate change will affect hurricanes. What is clear, however, is that greater warmth means more moisture in the air which means stronger precipitation. And while asking "did this specific event happen because of climate change" is the wrong scientific question, it's all about trends and the movement toward dangerous "never seen before" kinds of rainfall — one that scientists are seeing.

By altering the chemistry of the atmosphere, we've unbalanced forces that are literally astronomical in scale. It's the flow of energy from the sun that we've inadvertently redirected, channeled through the Earth systems of atmosphere and oceans. Even small changes in those systems are enough to unleash events that dwarf our civilization's ability to control or respond. These are events like "never been seen before" explosive rains that transform a city into an inland sea in just a few days.

But civilization will, by definition, have to respond to the sky-spanning forces we've unleashed. That's where money comes in. We've been delaying action on climate change for decades now. A big part of that delay has come because we've been told the costs of averting climate change are too high. But even before the waters have retreated, Hurricane Harvey is looking to be the most expensive disaster in U.S. history. Projected costs may run north of $100 billions. The fighting in Congress has already begun over who will pay for it — or if it will be paid at all.

As never-seen-before weather events are seen more regularly (the National Weather Service had to add more colors to its rainfall map for Harvey), it's now becoming clear that averting climate change will be less expensive than responding to it.

More than anything, though, the images from Hurricane Harvey catapulted us past equating climate change with clever ideological arguments. From the elderly residents in a flooded nursing home to first responders racing in boats across wave-tossed rivers that were interstate highways the day before, we all saw the ultimate reality of climate change as nothing less than concentrated human suffering. It was millions people in the jaws of desperation. And if we turned our eyes to Bangladesh, India and Nepal, we could see millions more at peril.

We've gotten so used to thinking about climate change in the abstract that we've forgotten why exactly anyone should care about it in the first place.

Unbalancing those planetary forces unleashes the Earth's potent and devastating powers. Once engaged, those powers are literally unstoppable by anything we humans have at our disposal. The heavy rains and heat waves (currently the most clear consequence of climate change) bring misery and loss. And after those rains move on and the heat waves abate we will not have the resources — the money — to continually pick up the pieces.

Katrina, Sandy and, now, Harvey — with each of these powerful storms we get a view into how a changing climate may play out in the real world beyond arguments and abstractions.

What it's always been about are the truly awesome powers inherent to planets and the real human consequences of altering the balance of those powers. Luckily, there's still time to marshal our own great and creative powers and chart a saner course.